You gotta get to church!

Anybody out there doing church music?

Anyway, this is the church vibe with my beloved Silverjet... a Re space echo and Tavo's miracle Dyno with a bit of tube screamer, believe it or not...

I do church music but on the organ. Typical, traditional hymns with solo organ prelude, postlude, etc. I have played guitar in church but that is usually an acoustic/electric.

I'm a keyboard player primarily. The pipe organ is the largest and most complex acoustic instrument ever devised. I've played guitar in folk masses, but, Catholics do love their organ music.

I wish I could play keyboards or piano!

Not for years. I did play guitar in my late teens for a folk service in the local Anglican Church for about two years, but it failed to attract a younger crowd and the minister stopped the once-monthly folk service partway through year two.

I do play piano but have never had the nerve to tackle a pipe organ. Too many buttons, and you need two feet!

I did a gig once for a theater project about the Passion of Jesus that took place in St. Mary's Cathedral in San Francisco, in which I played the massive four-manual pipe organ. It was difficult to control the volume in the huge space --- in hindsight it would have been more effective to use a synth and amp.

I also had a regular gig in the early 80's as organist for a Unitarian church in Richmond, CA. The congregation was mixed ages and races, and the minister was very progressive, so I would play with different soloists every week --- sometimes gospel singers, sometimes jazz singers, sometimes more folky and pop styles, including some fairly well-known folks. They had a Hammond A-100 with a Leslie (like a B-3, but with speakers in the organ itself too), a piano, and sometimes they would have me bring in my sitar to play meditation music too. That was probably the most diverse musical undertaking I ever did, and was lots of fun --- it's also where I developed the foundation of my Hammond chops.

St. Mary's San Francisco has a large pipe organ by the Italian builder, Ruffatti. They are not known for subtle sounds! That's a fantastic building and the sound really rolls around in there.

One of the weirdest aspects about playing pipe organs is the time delay on mechanical tracker organs. Modern wind driven organs use electronic relays and actuators, but the old mechanical style uses long rod assemblies---trackers---to activate each pipe and the delay can be up a couple of seconds. You have to play ahead of everyone and hope you hit the right notes.

If you haven't learned to play the pedals by the time you're a teenager, you likely never will master them. On top of it all, my feet are too big. Most classical organists have special shoes just for playing them.

Years ago, I got to work a Virgil Fox organ recital. He used an Allen electronic organ, and we had to haul in the huge speaker bins and horns and set it all up. He was an amazing talent---weird as a beard, but a great musician.

Virgil was an inspiration to me while in college. I saw him many times in concert, met him a few times and had arranged to study with him but never did. 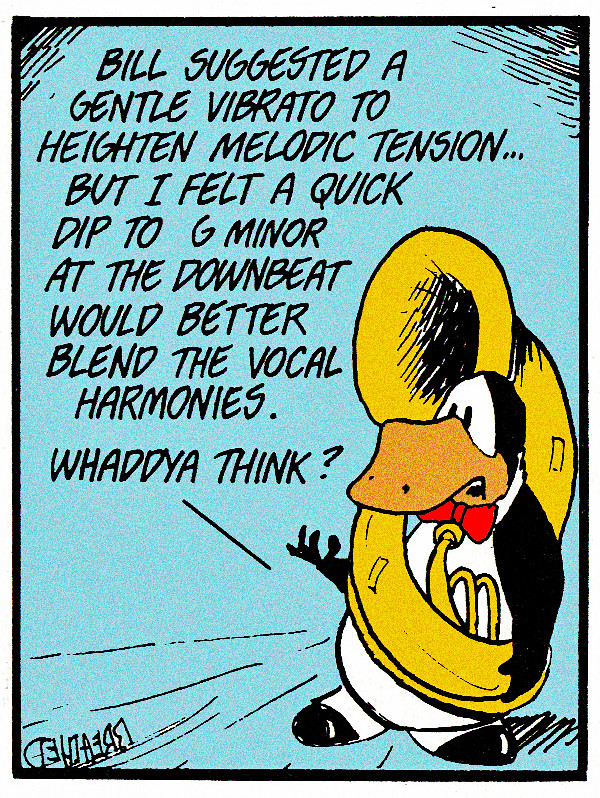 Wait--you play ahead and wait for everyone to catch up?

Wait--you play ahead and wait for everyone to catch up?

You've really got to trust your skills.