Those are indeed Waverly tuners and one possibility for '64, but from what I've seen on Tennesseans from the '64 or '65 timeframe, the much more likely tuner would be the Van Gent (or Van Ghent) open backs with sort of triangular buttons.

Both show up regularly on eBay, though not always easy to find.

This thread should help with the '67 I bought, I need tuners eventually.

.500" distance from center of top screw hole to center of .350 diameter hole in headstock

.300" distance from center of bottom screw hole to center of .350 diameter hole in headstock

I do not actually have the tuners but a body that had these installed.

Along the lines of this discussion about tuners with all the variations and permutations (sp) what would be an exact drop in for this 1966 6119? Looks the same as the 1964 shown in the earlier post Pics attached

Gear ratios range from 14:1 to 18:1, 16:1 is most common, HOWEVER, the diameter of the string post directly affects the ratio. That's why Grover Imperials suck for tuning even though they have a 16:1 gear ratio. The oversize post effectively cuts that almost in half.

So what tuner would be an exact fit without requiring any drilling or other mods? The headstock is delicate and I don't want to stress it out.

So what tuner would be an exact fit without requiring any drilling or other mods? The headstock is delicate and I don't want to stress it out.

You'll want to measure the diameter of the string posts; then go to stewmac.com and explore.

How about the reverse question. Are any other tuners a drop in fit for those that come stock on Terada guitars?

If that measurement is right, then you aren't likely to find any direct replacements. The hole spacing on most vintage-style tuners is about an inch. I assume that you're looking to replace the current tuners because they aren't working well. You can get replacements.

Van Gent is still in business. They make a tuner with a similar base plate, but not the same buttons. 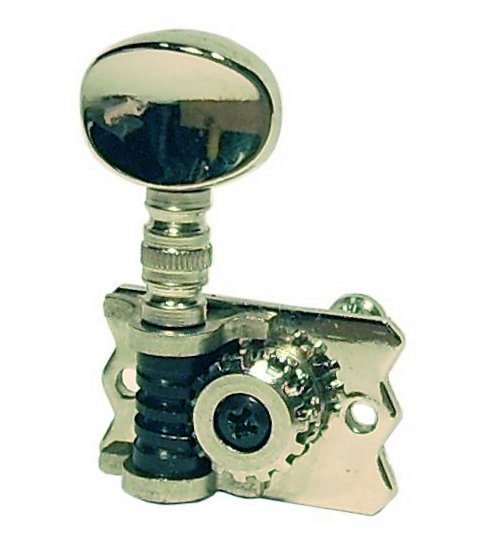 This seller has NOS Van Gents that are nearly identical to the ones you're replacing. http://www.guitarpartsandpi...

Or you can go used vintage, just make sure there's a return policy in case they're in as bad or worse shape than the ones they're replacing.
https://reverb.com/item/687...

How about the reverse question. Are any other tuners a drop in fit for those that come stock on Terada guitars?

Depends on what year Terada. The earliest were a Gotoh version of a Grover rotosound. The current modern Gretsches usually have some kind of Grover in them. Again, measure the string post diameter. I really recommend talking to the folks at stewmac.com as they really know their stuff and can recommend adapters if need be.

Thanks for your advice and input. The tuners are functional but since this a players guitar I was hoping for a cool simple upgrade. What is the best way to measure the diameter of the post?

If it ain't broke, don't fix it. You can't improve upon working.

Can anyone define the vintage (pre 80s) versions of grover imperial tuners? For example when did they start writing a tiny 'USA' at the bottom of the name 'Grover' ? Andwhen did the first truncated ones appear?

Gretsch used Imperials (with the big elephant ear/lima bean/butter bean buttons) through 1973 or so. All of those had the full mounting tabs and are disassemblable.

The original style of stairstep buttons (IMO, much more aesthetically pleasing) also lasted to about 1974. Not many guitar companies still used stairstep Imperials that late. D'Aquisto was one of the few. And you can see from early to mid-1970s D'Aquistos that the original, more angular buttons were still being made. By about 1974 you start seeing the new style of stairsteps and clipped-ear mounting tabs, and the tiny USA. And while I know the modern Imperials are not disassemblable, I'm not sure about the early new-style American made ones.

So, I would say all changes appeared to have happened simultaneously, circa 1974.

Are these Waverly tuners?

Would the be these same?

I'm not sure if they're Waverlys; might be an earlier version. The late '50s kind have the railroad tracks. The original owner of my '59 Clipper replaced the original Kluson strip tuners with Waverly strip tuners and they were a drop-in replacement. But the screw holes were slightly different. Ask the Stewmac guy if his have the same post hole footprint as vintage Klusons/Waverlys. The new Klusons look like the old ones but have 14:1 gears, but I'll take vintage Waverly strip tuners any day over Klusons.

This is timely as I just realized the tuners on my 1962 6120 are not stock. I think they are Grover Rotomatics. Below is a link to a photo where you can see whoever replaced them filled in the screw hole from the originals tuners, which I believe were Waverlys. I'm fine to leave them as is. Is there a reason people would replace the originals?

I'm more annoyed by whoever restained the headstock a horrible shade of brown and managed to get stain on the Gretsch logo and horseshoe. That I really want to fix.

it was fairly common in the late 60s/early 70s for folks to replace their stock tuners with Rotomatics. you especially see this with Gibsons because 60s Klusons were horrible; there were good reasons the brand died until the vintage market generated demand for repro tuners. in my experience Rotomatics hold tuning better than old open-back tuners in general; the gears on open-backs appear to wear out more readily.

Reading this stuff I think i hindsight it's funny that I probably removed the original open back tuners from my tennessean and put schallers on it and literally ditched or lost the originals..almost 30 years ago. I also lost the original bridge which I did keep for a while. I did put silver grover imperial buttons on the schallers.

These are non-original Grover tuners on a 62 Princess. Anyone know where they are come from???

They're modern Rotomatics with Imperial buttons.