The other question is formake1968 are you going to buy it?

That label is an obvious fugazzi. Blue filigree bordered labels have serifed font serial numbers in RED.... like this one.

Interesting, thanks for all the answers... more wild guessing... could have started as a private home project or a custom work (or illegal night job at Gretsch) in 1989-90. With access to the genuine material. Someone took it and sold with fake tags, off the record? Later some other wanted (but shouldn't have) to get rid of the 0-fret. And then there was another guy, not very skilled, who wanted to work (and screw) on it: he would cut the already scratchy back, use his pocket knife on the pole and braces, change the worn-out harness and bridge - or was he the one to fake-tag it...

It is very light (2,4 kg / 5lb 5oz) guitar indeed and, actually, was originally nicely made. The top is very thin (therefore support pieces in the f-hole ends) and it sounds loud. Ugly inside. Pity for the sound post.

I was about to pass already, but re-thinking once more. It could make a player. Only if the price tag changes to (much) more attractive. (And what would you think that could be?)

If the price was right I’d buy it, and play it with joy.

That would suggest that it did not start as an early modern Gretsch. They had heavier 5-ply bodies until FMIC started making changes around 2003-2004.

I suspect what we have here is a “Parallel Universe” Gretsch!
Where does this beauty reside? And what is the asking price?

I’m going with Greco or other 70s-80s Japanese build, likely later owner-modified. The light weight, excellent original construction (with detail differences from Gretsch practice), and the look/vibe/aging of the finish all support the origin.

Removal of a zero fret, replaced pots, and the rough work around the access hole suggest later, inexpert mutilation. I don’t think Gretsch would’ve left splintered wood around the hole (which surely would have been cut before painting anyway), and I don’t know of any Japanese copyists from the 70s-80s who would have been both skillful enough to make a nice guitar and sloppy enough to leave that kind of work.

Plus, I’m not aware any vintage 6120 had mutes and a backpad - so, post-manufacture hackery by a southpaw who had very specific notions about a dream Gretsch-model mashup.

I think it’s worth what a buyer is willing to pay. If the fundamental construction is sound and solid, at the right price it would be worth having. Certainly as a player - multiplied by the rarity of its left-handedness (not to mention the backpad) - but also as an historical oddity, and a guitar with a very mysterious pedigree and backstory.

Yep, different headstock shape, not to mention brand name and lack of horseshoe. The overlay could have been added later - but looks well enough executed not to have been done by whomever pulled the zero fret and hacked the hole (though speculation allows for more than one post-manufacture modder). Headstock shape is more problematic for the Greco theory - though, again, post-build mods are possible. Unlikely, though, given the difference in binding.

Still, this is just one example of a Greco headstock. Greco was a brand name that was applied to guitars built at various places in Japan, whose practices varied.

AND, as a lefty to begin with - and thus almost surely a custom order - anything might have been done. More likely to have been an after-hours skunkworks operation, though, than regular process through the front office.

And it doesn't have to have been Greco. I'm still liking the Japanese connection because the light build (even the out-of-plane f-hole tips) are consistent with my experience of Matsumoku archtop practice in the late 70s/early 80s. My Matsumoku-built 175 knockoff has the thinnest top of any of my archtops, and is light and resonant.

To me the heel plate looks whiter that the body binding, and there looks to be something going on at that area of the neck joint, like scraping or glue residue etc. What ever the body started out as maybe the neck was a later addition? And as far as the headstock veneer goes, I bet i have a dozen or so from when Duke was selling them. He also sold lots of bodies, tops, backs, neck blanks, and anything else you needed to cobble a gretsch-like guitar together.

maybe the neck was a later addition? And as far as the headstock veneer goes, I bet i have a dozen or so from when Duke was selling them.

Tuners aren't any sort of vintage Gretsch either. Could be 70s-80s Japanese, or later replacements.

After everything I've seen about this guitar, both here and over at the G-T forum, my only solid conclusion is that the previous owner was this guy..... 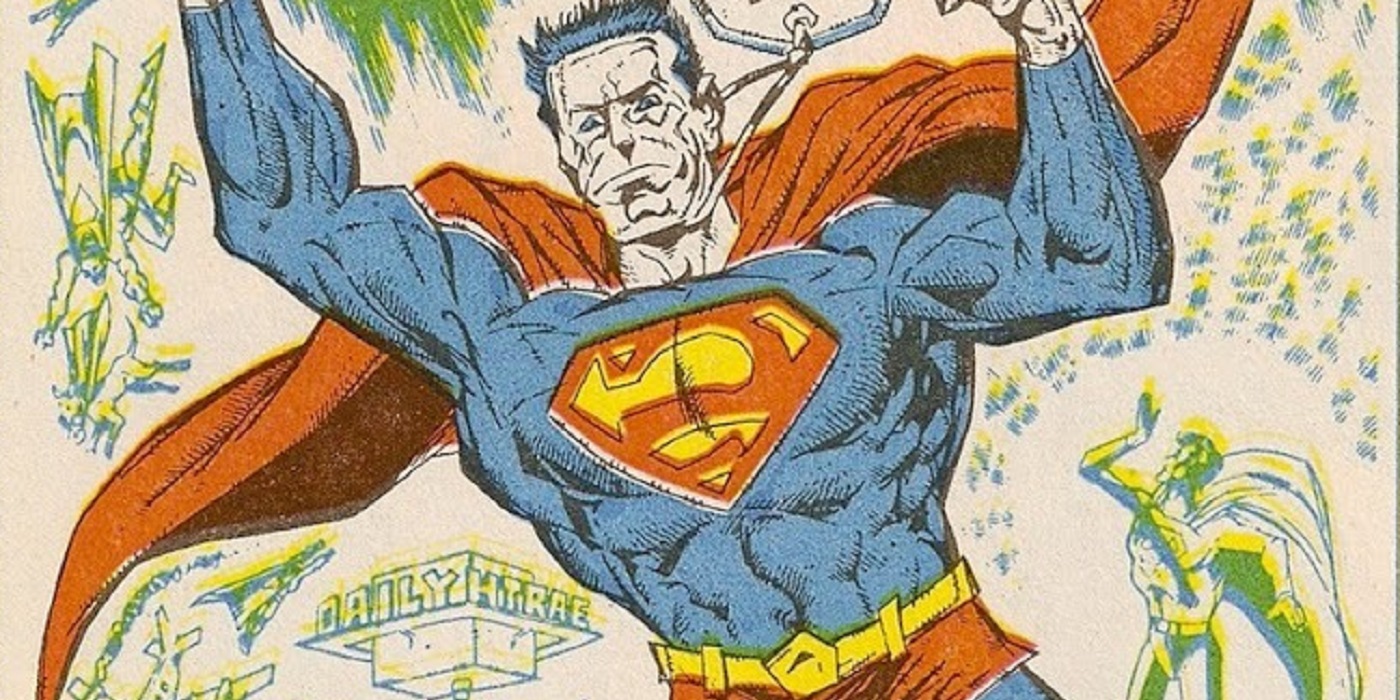 They don't call him "Bizarro" for nothing.

More interesting information from all of you gentlemen! Wow, thanks... Now, as the access to the inside is so easy, I'll soon add some photos from there. Whether it will be learning or just amusement, I don't know... Gotoh, says the tuners (but the photo was blurry).

I doubt very much that a Gretsch employee did this after hours at the factory. Too much is wrong.

So you have hands on access to this guitar? Where doers the owner claim it came from?

I suspect what we have here is a “Parallel Universe” Gretsch! --Hipbone

Totally an off-the-books, off-the-chain, 83rd dimension dweller. I have NEVER seen a lefty 6120 with Dynasonics. That was the first thing that struck me. I didn't have to gargle the other details. I give it a pre-emptive Fake tag, and someone can defend the guitar against it if they like, but I'm not seeing much traffic in that direction.

In fact, I have only seen one vintage lefty Gretsch hollowbody of any flavor equipped with factory-original Dynas––a Streamliner built in the '50s, but by the time I saw it, it wasn't actually equipped: the pickup was gone, and the body had been hacked to death by a right-handed player with bad conversion-to-right-hand-orientation ideas and worse luthier skills.

Some of the Historic models in the '90s had whatever flavor of Dynas they were using with that line, and they sound quite good. Other than that, nothing hollowbodied with Dynas.

(On the other hand: I would like to have the Bigsby and Dynas from this guitar.)

Dear judge and jury. The last pieces of evidence for this case will be represented. The first one here is a picture of the complete remains of the b&w paper tag. May be referred to, if such cases would occur in the future.

Clearer picture of the tuners.

The f-hole construction. Binding overlaps the top. And here you can also see (from the paint remains) that the orange body was painted before the pickup hole ends were cut a bit more to make these dynas fit in. The back structure shows, too: it measures 3mm in thickness, with light wood covered between the thin layers on both sides.

The neck joint does have a different colour (MOP alike) white half moon. and the joint line there has been painted white with a small brush. Under the neck there is a narrow separate piece which attaches the neck to the top (not showing).

The next 2 photos are of the braces. I have talked with a luthier about them. They seem so severely deleted, that the structure has a possibility to become unstable in the future. Please judge yourself...

Lefty Bigsby could be one of the jewels here now? Next to the knob there is an empty hole, so it looks like this Bigsby was installed later, too.

Pardon me for posting so excessively, and also that this seems to belong to the early modern era (not vintage). Or other guitars. Also, I'd like to state that the seller never claimed it to be vintage, and it was first believed to be ca. 1990 Japanese Gretsch (or now should I say, product). That'll be all from me today, I'm happy to follow your possible comments...

So let's see a close up of that lefty Bigsby...