Can't remember if this one's been done (what an awesome thread), but good enough to risk a repost

Chris Cornell is on the list already I think... as he was known to play a pre-FMIC Silver Jet, and maybe some others. But what I didn't know was that he apparently had a 2-tone 50s Clipper as well!

I knew he played -- but had never seen footage of -- Conway Twitty playing "It's Only Make Believe" on his '57 6130 Round Up. It's covered by a cool leather job as seen in detail on page 108 of your friendly neighborhood Gretsch Decoder Ring. Seems to have the original pickguard too instead of the gold one on it now.

Another pic of the Round-Up.

Here's a cool shot of Conway and his '57 Round Up -- and his lead guitarist has what could be the last batch 6130 '57 Filtertron Round-Up (or Chet Jet with gold guard?) -- with hump-block markers!!!

One more shot: lead guitarist identified as Joe Lewis, at the Flamingo Lounge in Hamilton, Ontario 1958. Matching cowboy cases behind them. I think a Chet Jet as I'm pretty sure I see a Bigsby.

Wow, those are two seriously oddball Gretsches, especially the humpblock FilterTron 6121. What are the odds they'd end on the same stage?

Okay my last one WAS a repost, shame on me! But I think this might not be...

Scott Ian... from Anthrax with a Malcom sig model!

I just went back scoured this entire thread to be sure I wasn't duplicating here... but how in the hell have we missed Mike Campbell?

Another of Campbell with his vintage Falcon...

An early photo with his beat-to-crap Clipper (later refinished silver).

Roy's in here somewhere already, but this pic is awesome.

Roy's in here somewhere already, but this pic is awesome.

Fantastic photo! Looks like he's playing a '55-ish Corsair like this one. It needs a caption, tho: "I'm gaga for Gretsches and cukoo for Corsairs" or somesuch.

Blues man Colin James during his Little Big Band era played a GreTsch Jet. Probably best known by Canadians Colin became well known when he toured with Stevie Ray Vaughan. In an interview with Guitar Player magazine they asked Stevie who he thought the next great blues guitar player would be and he named Colin James. Colin sort of confused his blues fans by going the Brian Setzer direction by moving into Swing forming his Little Big Band. He later returned to his blues roots. His latest album Miles To Go is worth a listen.

Fred “Sonic” Smith of the MC5, I read it in Wayne Kramer’s Bio so I had to find a picture to prove it to myself

Bobby Lord from early/mid '50's thumping away on a gorgeouse pre-War blonde Synchromatic; not sure if it's a 160 or 200. Looks to have one of the "filled" Synchro tailpieces. And doesn't that tiger-stripe tort binding just pop. Is that Grady Martin seen with a double-neck at the very beginning?

Here's a new-to-me artitst. A young man from Great Britain making what I call guitar pop music. "Ten Tonnes" is his name and he actually plays. I gave some songs a listen and like it. I'll add a video, too (edit: Gretsch sighting at 2:32). Still worth it. 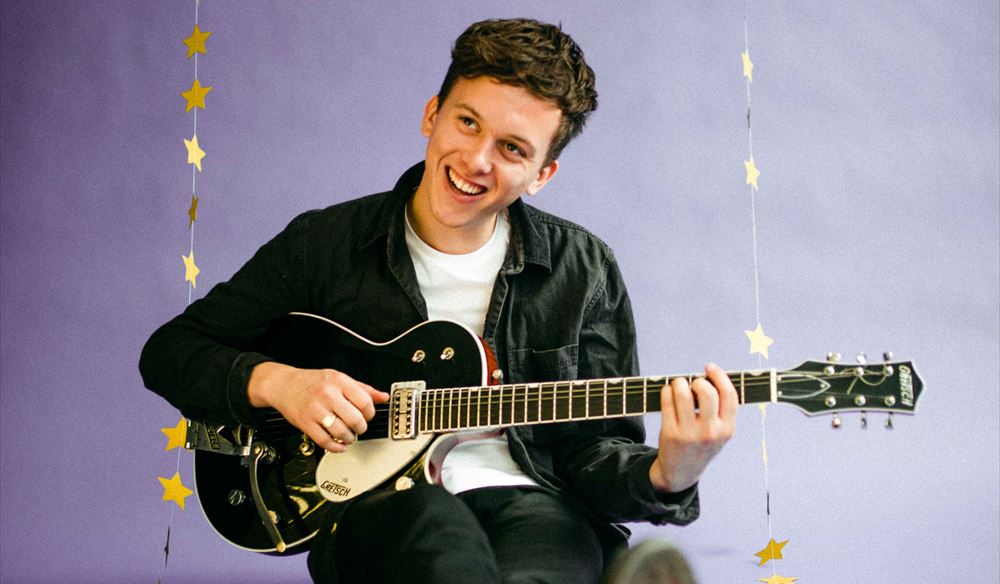 Was watching some older Man... Or Astroman live videos and to my surprise I noticed Star Crunch playing a few Gretsch guitars in the 90's. He is so associated with Mosrites and Hallmark copies that it came as a bit of a shock.

The Boss in his new video:

while following them on Twitter, i ran across this photo accompanying a concert review; this is James Dean Bradfield of Manic Street Preachers with what i assume is an early 1960s doublecut 6120.

Bueller... anyone? Anyone? Bueller?