Straight out of the '51 catalog, with those notched bound f-holes and double wheel Melita. The seller and repairman claims the top is solid spruce; could be judging by the thicker f-hole binding.

Very interesting. A lot of good restoration done to this guitar. I'm surprised it didn't have the solid truss rod in it, being a top of the line guitar. Regarding the top being carved, Gretsch didn't stop entirely having this feature until the mid-'50's when only the Fleetwood and Eldorado continued with it on these models which were custom order only.

Regarding this guitar, did they not have a pup selector switch? If not, when did it appear?

Electro II's did not have a switch to my knowledge prior to being renamed Country Club in '54, but I'm willing to be shown otherwise.

My ‘50 Bacon Belmont (an otherwise branded Electro II) had the blend knob rather than a switch. No fancy bound, notched f holes though.

No truss rod? Mine's later...53, I think...I'm pretty sure there's a truss rod that's accessible (relatively speaking) in the neck pickup cavity. Pretty stout neck...hasn't budged as long as I've owned the guitar, so I never checked to be sure.

Yep... the earliest Electro ll examples didn’t have the master volume knob. This one also has the early style aluminum Melita (aka the good ones!).

I didn’t think mine had a truss rod until I held a strong magnet up to the neck. It’s in there, just not adjustable.

VshareLink is a download manager which lets users download any app that is available in it. https://vshare.one

After corresponding with the Ebay seller... this Electro Il predates the previously assumed “debut batch” at #66xx. It’s just adjacent to another which I assumed was a prototype of sorts in the eclectic #45xx batch. This newly discovered specimen is now the earliest example of the model I’ve ever documented!

The seller is a luthier and mentions his upgrade of the adjustable truss rod in the auction.

Thanks Ed. I should pay closer attention.

My first instinct was to say that it probably did have a reinforcement bar, since that's not what most people mean when they say "truss rod." So when the seller says it had "no truss rod," I wouldn't assume that means there was nothing in there.

But I'm not so sure. Obviously Gretsch did use non-adjustable steel reinforcement rods in necks before this point. But I never really looked closely at the "Miracle Neck" patent before. At first blush, it looks like it's showing a reinforcement rod. But it's not. It's actually a tongue and groove system for added rigidity. Apparently it's a groove in the neck and the fingerboard has a tongue that's inserted into the groove in the neck. Maybe there was a period where this was the only "reinforcement" and there really was no rod at all.

Also, when it rains it pours. I don't think I'd ever seen the bound notched f-holes outside of the '51 catalog before last week, and now a second example in a week. Next thing you know the pointed headed Electromatic from the '51 catalog will pop up.

Gretsch would put the patent # for the "miracle neck" below the serial/model label on many of these early '50's models, even if they clearly had a metal truss-rod. I used to think the stamp was inked, but a few close-ups almost look like the stamp is heat-impressed, "branded" if you will. "Miracle Neck" seems to have had more value as a marketing term than as an actual application.

I do think the switch is legitimate for later Electro IIs. We've seen enough of them that it seems unlikely that they were all aftermarket upgrades. And from Gretsch's own paperwork (came with a '53 Jet), it seems that at some point around that time they figured out that a pickup switch was a good idea. 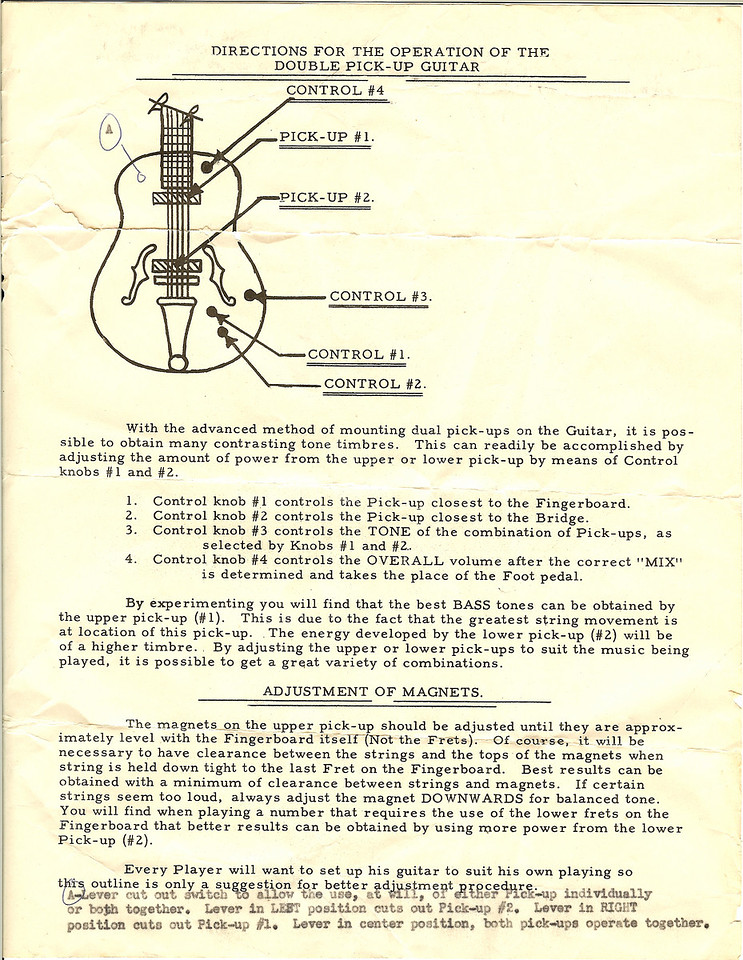 Gretsch would put the patent # for the "miracle neck" below the serial/model label on many of these early '50's models, even if they clearly had a metal truss-rod. I used to think the stamp was inked, but a few close-ups almost look like the stamp is heat-impressed, "branded" if you will. "Miracle Neck" seems to have had more value as a marketing term than as an actual application.

I agree that "Miracle Neck" seems to have been mostly a marketing term and its presence may signify something or nothing at all.

My only point was that if they went to the trouble of patenting a design that relied on a tongue and groove joint between the neck and fingerboard for rigidity rather than a reinforcement bar, then perhaps they actually did make some guitars like that, and perhaps this was one of them and the seller truly did mean that there was no reinforcement when he said "no truss rod."

Am I looking at it wrong, or is that actually a 5-piece neck?

Am I looking at it wrong, or is that actually a 5-piece neck?

No, you're seeing it right. Five piece neck.

As for the neck reinforcement question, I just asked the seller and he got right back to me.

The neck did have a solid bar inlaid in it. It was a type of phenolic or Bakelite material. It wasn't really strong enough to keep the neck straight. Fortunately it was similar in dimensions to an adjustable rod in an aluminum channel, so it was pretty straightforward to replace.

So, no patented "Miracle Neck" tongue and groove construction. Just a regular non-adjustable reinforcing bar. But it's interesting that it was a synthetic material, not metal. I would assume nobody was using graphite for neck reinforcement in 1951? But I don't know that.

I've tried three post-war Synchro 160s and they were all neck heavy. I'm assuming they had metal rods (didn't have my magnet then) so maybe the synthetic rod was a way of reducing weight? Interesting regardless.

I wound up buying that guitar.

Here she is in her new home.

Great Tim - it looks to be a really good restoration.

Now, what’s in the background of that photo?

Behind the guitar is a 1947 Collins 212A-1 Broadcast Console. Part of a vintage recording studio I have at my home. The VTVM is the same as on the cover of the Chet Atkins Workshop album. And there is an Ampex 350 there too.