Scotty was huge in my eyes. 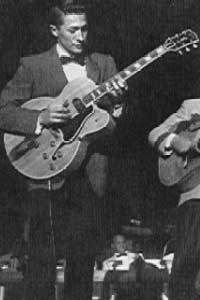 Looks like Scotty and Elvis are reunited once more. Two men who literally defined the sound or rock and roll...

Aw, man, this sucks. Another one down in 2016. I absolutely love the early Sun-era Elvis, and Scotty is the main reason why. RIP Scotty, you will be missed.

Aw, shucks... that's too sad. This is not turning out to be our best year where icons and heros are concerned....

You can't say that he was cheated by death. And fortunately, with his many recordings, we have also not been cheated. The deaths of these iconic figures merely serve to remind us of our own mortality.

A wonderful guitarist and, by all accounts, a decent guy as well. You can't leave this earth any better than that, in my book.

One of the great icons and pioneers of Rock. From all accounts a very decent and humble man.

Legend isn't a big enough word or descriptive enough word for Scotty Moore. A true giant and innovator and the very epitome of rockabilly guitar.

Thanks for everything Scotty.

Reports are that this may be an internet hoax: Link

This has been a terrible day. First they say he did. Then they say it was a hoax. Now they say that, sadly, Scotty did indeed pass away today about 1:30. Scotty was an original, and played some of the most awesome licks ever.

Confirmed by Deke Dickerson as not a hoax. Scotty passed away today.

RIP Scotty - the worlds first R'N'R guitar hero. Terrible news. He was a massive influence on so many players. I somehow drift into Mystery Train almost every time I pickup a guitar.

Far too many losses lately... As Ric12string said so well, a person cannot do any better than being an icon and respected as a good human being, and Scotty was by all accounts both. I remember standing in Scotty's spot at Sun Studios and feeling the mojo. I'll just add this: I am glad I grew up when I did. I feel like I got to grow up in the very best era in American music! I am such a huge fan of the sounds of Memphis, and Elvis and Scotty were pillars of that sound. Somebody better put a thumb pick in the casket.

84---he had a long rich life and many of us learned a lot from him. RIP Scotty.

Damn! The loss of a true original. RIP, Scotty!

This makes me genuinely sad. kinda like when Lemmy passed. Another legend gone. RIP

You can call it :The Year, The Music Died! Just stood up and read this.Not a good start in the day.I will play the Sun records on the way to work, to think of him. He was a great innovator. RIP SCOTTY MOORE !

His guitar, his playing and his singer changed the world.

Thank you from us all, Scotty: R.I.P.