I was on the fence about a sonic blue Jag-Stang back when they were new. I so regret not getting that.

I have red (Fiesta Red?) one sitting in a case around here somewhere. Maybe it's time to fix it up and get it playing well again.

There were two I regret not getting.

The first was a silver sparkle Jet, maybe 10 or 15 years ago. The price was a stretch for me at the time. A buddy of mine was at the music store with me and convinced me to think about it overnight before buying. I went back the next day and it had already sold.

The second was that '99 hot rod that Tavo had for sale just a little while back. I've wanted a '99 hot rod for a while now and was very close to buying that one.

Well, lesson learned with the sparkle Jet... I ended up tracking another '99 hot rod down in Nashville that as far as I can tell had been sitting in a case for the whole of its life. Not a blemish to be found anywhere. I had a friend go check it out in person before buying it. It showed up about a week ago and I'm now waiting on new electronics and hardware to get it up to the spec it should've been from the start. But even with crap electronics it's one of the best playing guitars I've ever had. Hopefully soon it'll also be one of the best sounding.

Oh,forgot another Rickenbacker,this time a mapleglo 381 6 string,used ,they wanted £1850 ,i emailed the shop and they said they would knock 100 off,so i countered with £1550,they said no chance and put the price back up to £1850 ! Bear in mind they had this in the shop for months,but should've took it at 1750,but i really wanted a fireglo one,so...

Newly opened local shop,sadly closed now, had a B stock Rick 381 in Montezuma brown back in 03/04,£1850, i was offered it for £1650 cash,i really should have but i was still paying off a loan and just couldn't justify it. And i still want a fireglo one.

I was 18 and my guitar playing economics teacher told me there was a 50s Strat for sale in a Cardiff guitar shop called Livewire.

Sure enough, they had a maple board Strat refinished in black. There were other issues, like missing pickup covers, and it was absolutely filthy.

So, I decided it was too scruffy and incomplete to justify the £200 asking price...

Bearing in mind this was 1983, I was probably right. A refinished Strat with all original parts could be had for closer to £550 in those days.

But I often wonder what became of that guitar.

The only one I missed, I found its twin sister soon after ...

I did have to do a turnaround to get my mid-80's Wilson Staff Goosenecks, though...I played hard to get, the "Play it again, Sports" store won that bet. We were 5 miles down the road...I did an illegal U-turn and said...$h!t...gotta have them...I was Golfing a lot then.

None, really. I now have less money.

Electromatic Bo Diddley, the rectangular bodied version. The original pups sounded great. Shame about the blonde neck and black binding....I thought it was meant to be like bo's?

Still want one, anyone selling?

I know a couple of people with one.

Not sure if they're interested in selling, but perhaps you can convince them by throwing wads of cash their way!

A week before the Stray Cats broke in America you could get any Gretsch hollow body for about $100.00

A week after they broke there were none to be found.

A beautiful Travis Bean TB1000S (but the neck was a bit cold) It was for sale in the Lake District, UK. for £200 about 15 years ago. They are very rare in the UK. My wife wouldn't let me

I know a couple of people with one.

Not sure if they're interested in selling, but perhaps you can convince them by throwing wads of cash their way!

Well part of the reason it's hard for me to find is that I'm in the UK. Plus I'd need to find one at an appropriate second hand value.

I forgot--once I went to a music store in dallas and tried a guild blues it'd with p90s. They put it on a strap and I was playing when the strap came off at both ends at once. Pop. I think the sheer panic resulted in my reflexes going hyper quick and I somehow caught it before it hit the floor. The sales guy just says: 'You're like a freaking cat!'

Maybe, but I was so rattled I just handed it back to him.

That night I decided it was fate. Alas, I was wrong. I went back the next day and it was gone.

I remember walking around the music shops in Denmark St and Charing Cross Road back in the early-mid '80s. Plenty of Gretsch hollow bods for around the £300-400 mark, but the thing I remember most was that every - and I mean every - shop had at least 1 Hofner Beatle bass for sale, and they were all £185. Now, if we can just find a time machine and £5k or so in 30-year-old notes we'd be laffin'.

When I was looking for my first electric guitar in the early 1980's I passed on an $600.00 blond Gibson Birdland. I ended up getting my 69 SG Std. that I still have. But, I could still have a blond Birdland if I would have went for thet one. Thanks John

The more i sit and think about this i start to remember more!

There was a 1973/74 Fender Strat in 3 tone sunburst that came into my local back in the early to mid 90's ,it was from a guy who bought it new ,along with a Tele,but decided to get saved and give them to the church to look after.Fast forward to the 90's,and he's moving to Scotland and wanted to sell.

This thing was brand new and totally unplayed with the tags ,case hadn't a mark on it,priced at £350 ! I should've bought it,if for nothing else than to sell later on,like now ,when they're going for silly money.

I guess I have more guitars than regrets. And I don't regret it.

I called in the music shop I used to buy my Gretsch strings for my Tenny , we always had a chat about his stock. He asked if I'd seen the White Vox on display in window. I had missed it so he got it out for me to try. It looked a lot different to the 2 Phantoms he had the previous year. Told me it was a Vox Gutar organ, the sounds it could produce were amazing,,,but it was very difficult to get used to.

The guitar was very heavy .not well balanced.

He said that it needed at least 100W amplifier to get the best out of it. I had just recently upgraded to a 50w Burns sonic amp so cash was short, and this amp suited my Tenny.

Over the next couple of months every time I was in the city I went in and tried the Vox. Really wanted it but he wouldn't negotiate on price..Said it was a very rare instument and he thought it would become a collectors item .

Holidays and extra busy at work meant I didn't go into city for over a month. When I got to his shop there was a big notice in window CLOSING DOWN SALE with a list of all equipment at knock down prices! The Vox was listed at £82.00 !!!! I dashed into shop , said I'll have the Vox guitar organ.

I still regret missing it.

John Frusciante (RHCP) CAR Jazzmaster at GC Hollywood about 1998 when he unloaded a lot of instruments to feed his drug habit. Vintage Jazzmasters were still reasonable back then and even though it had been his it was reasonable. I had more money to spend back then and should have purchased it.

Also a circa 1953 Gretsch Synchromatic like this about the same time as the John F guitar. This Gretsch was about $1,900 if I rrecall. Two big blunders on my part.

I forgot about this one: 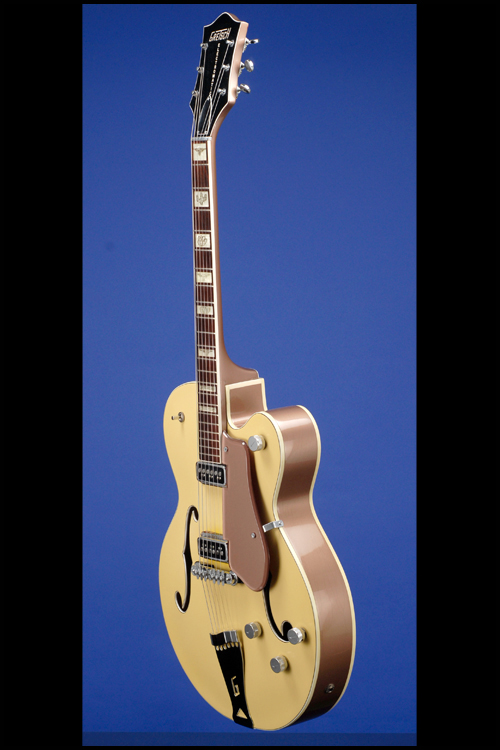 It's a '56 Streamliner custom ordered with western inlays and dual pickups. It was on eBay probably around 15 years ago and I could have gotten it for about $3500. But I had tunnel vision at the time and wouldn't look at anything that wasn't either a 6120, Country Gent or Jet. The next time I saw it, it was for sale at Fretted Americana, and accordingly had an astronomic price tag.

I once traded a guy a set of 4 Krager Mags with mounted B.F. Goodrich wide ovals, for a beat Les Paul. Now that guitar could be worth 100K, or 30 cents, dependent on how lustful you might be for it. It was pretty beat, binding failing, buckle rash, crooked tuner.. but I needed a guitar, he needed the wheels. I don't know if it was an even trade or not. At the time, I didn't even possess an amplifier, so I don't know if it even worked right. I kept it for a few months, tired of it's beat look which now is "patina" and "relic", and traded it away for something I don't even remember.

I should have kept it. It was a Les Paul, a Gibson, and in a time before guitar snooty took over... I might have had a chunk of change and never knew it.

Back in the early '90's I dropped into an eclectic guitar shop on west Queen St in Toronto just to browse and play a few Gretsches if they had them and they had a lovely, well looked after very 'knotty' mid-'50's 6130. started out with a nearby amp but the owner heard me playing some Chet stuff so he plugged me into a nice vintage Fender. Sounded heavenly and played well, even with the standard width neck. Folks that came and went were intrigued with the music and came over to watch me. Would've been a very cool guitar to own, if a little small, with all the country accoutrements and wonderful knots in the pine body. Alas....it was priced at $3K and waaaay beyond anything I could afford, especially given their value today.

A 59 Jazzmaster, about twenty-five years ago. Sunburst with an anodized guard. I thought it was too expensive at about the equivalent of 1K today.