I looked him up...Worked for ATT/Lucent, retired, started what seems to be a family, good time band in Georgia.

Someone will add to that I think...

Looks like they will ship, but it’s hard to figure out costs. They will automatically calculate shipping on invoice, but I would prefer to know before bidding! Anyone know what ballpark pricing would be for an electric within the US?

For the Walter Becker auction, Julien's put me in touch with this art shipping service. The quote I got was $750 for an amplifier and $350 for a guitar.

I am not making this up. I can repost the email here if no one believes me!

For the Walter Becker auction, Julien's put me in touch with this art shipping service. The quote I got was $750 for an amplifier and $350 for a guitar.

I am not making this up. I can repost the email here if no one believes me!

I totally believe you and that’s what I was worried about!

I'm guessing that conversation was like..."But can't you ship them together?" 'Why no we can't , they're separate lots."

That's as expensive as truck freight. That would certainly give me a bad taste for online auctions.

On second thought it's worth posting the pertinent parts of the email--the words in ALL CAPS are the shippers, except at the final email when you read bottom up:

sorry I thought you meant a guitar and amp. Guitars run approx 325.00

Thank you for your responses to my questions. I hope you don't mind that I reconfirm one of your responses--do I read correctly that a shipping cost for say a guitar in its case to Michigan would be $750.00?

"Can you give a ballpark quote for shipping of a guitar in case or regular sized amplifier to the midwestern United States? APPROX COST WOULD BE $750.00"

Thank you and best regards

Here's what caught my eye, for better or worse:

Enough lefty stuff is available to lure me in. In order of interest: a messy Silver Jet that's missing some parts, a G3156 (underrated little beasts), and an '01 White Falcon––a '59 reissue (IIRC) that Elliot Easton talked them into making, and it was only available left-handed.

I already have a Bigsby guitar, and I can tell you that they are beautifully built and feel great to play. The sound isn't all it could be, but more '50s-accurate pickups (like TK Smith's CAR pickups) can address that.

They have 30 (!) Traveling Wilburys available, for pity's sake; some scratch 'n' dents and duplicates from the Bachman collection (he had some oddballs, including that Penguin "copy"), it appears; and more G3203s (?? a budget acoustic from 1999) than you would ever believe were built in the first place.

Unfinished guitars abound for the handy and stout of heart. God only knows what 20+ years of lying about in a warehouse will have done to the wood and wire. BUT there are Country Clubs, White Falcons, and 6120s heavily in the mix. Some have already had finish applied, so they are mostly in need of hardware, assembly, a power wash, and a prayer. Southern Belles, too, and they're being offered cheaper by the near-dozen: three lots of 10 husks each. Back up the truck, Tito.

I don't know who Hal Zwicke was, but he had a bad problem for guitar synths and Brian Moore guitars. Geezowie.

And, really, we get one small not-very-hi-res pic to go on, and minimalist descriptions? Not even years. If you don't already know what something is, you're not going to find out. No mention of conditions?

Lotsa 70s and 90s - to be expected, I guess. Pay attention to headstock size and shape before getting over-excited.

Plagues of acoustics...Historics...soooo many prototypes...and Bigsby reissue guitars. Were they really going to be that popular?

Plus a Les Paul Standard, a PT Cruiser, and a Harley. Market research for lifestyle branding?

Kinda dig:
- the wacky red Framus
- the Gretschelicos
- the Lake Placid Blue "Historic Series" Gretsch 335...
- unfinished Country Clubs...identified as 1955 reissues, one from Custom Shop?
- nice flamey big-bodied "Model X" (?) prototype
- Mosrite-necked Club with goofy pickups? Whoosh.
- all the fixtures, jigs, forms, tools, and parts I have no room for and wouldn't actually use
- always nice to see a Keith Scott or two
- what's with deal with a 6120-lookin' thing with DeArmond 2k pups and a mud switch?
- unfinished single-cut Country Classic G6122SD? Like a proto for the '58 Gent reish?
- Electromatic Super Chet proto? That might have legs.

...aaaaand I made it through. Kind of a slog.

I could bring a bunch of Jasper Wood Products drum shells home, I guess, and Nate could build sets for sale. Sounds like a great way to have excessive transportation costs, storage problems, and a mountain of logistical hassle.

Lots of decent prices (at the moment) on guitars one might want (if you could tell about year and condition). Most of the ones I'd buy if they were certified bargains already aren't.

Auctions are just depressing. So much potentially good stuff left forlorn and looking for homes, something like an orphanage.

There's a link on each listing to request a detailed description. I clicked on a couple and am waiting for replies. I'll file a report on them when I get them.

I believe I have some familiarity with items from Fred Gretsch's warehouse. An eBay seller in Georgia with the user name "himonry" seemed to get a trickle of stuff from there to sell over the years. I bought a number of items from him, usually B-stock Bigsby vibratos, but also a NOS Silver Jet that had a repairable fretboard issue, and it turned out to be a truly fine guitar, its pre-FMIC heritage notwithstanding. I sold it off because some shiny object or another caught my eye and I had to liquidate something in order to buy it. I also had an "if you ever decide to sell it" buyer-in-waiting with a standing offer of several hundred dollars more than I paid for it. He's very happy, and now maybe I can replace it in my collection with Lot 909. It doesn't have my name on it, but it does have my number.

To see the e-mail link for the condition report request, look below the blue "like" button.

I see much that I want, but little that I need.

If I had thought about it, I would have been curious to know what unknown wonders Gretsch had in their closet/basement/warehouse. Now that I, to an extent, know, I'm left with the odd feeling that I've rifled through someone's dresser drawers only to find somewhat threadbare, but neatly folded, clothes.

Well, I very recently acquired this -- 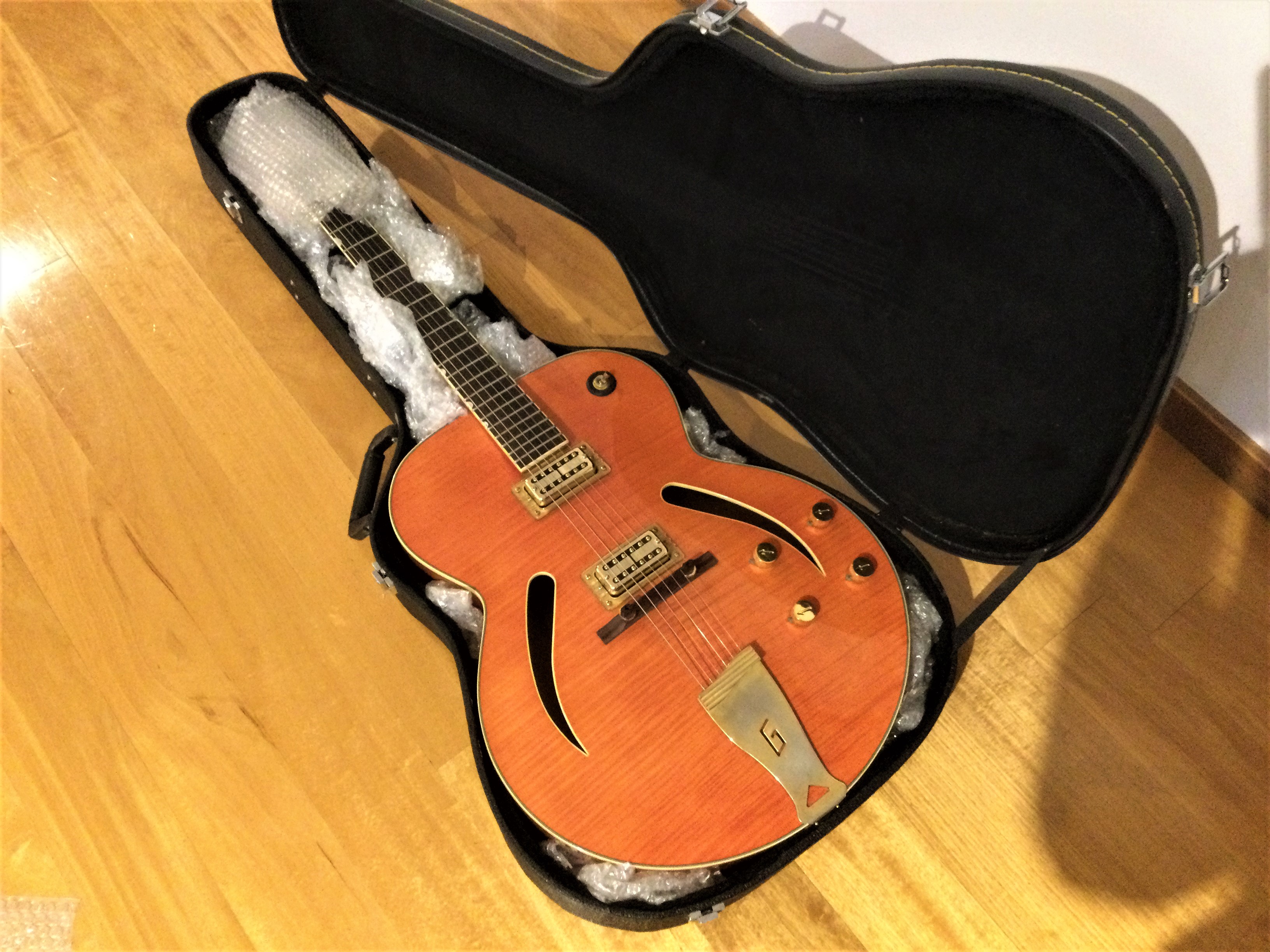 -- and thought I was finally all done, Gretsch-wise, but now I'm wondering if I don't need its cutaway-body sibling out of this darned auction! 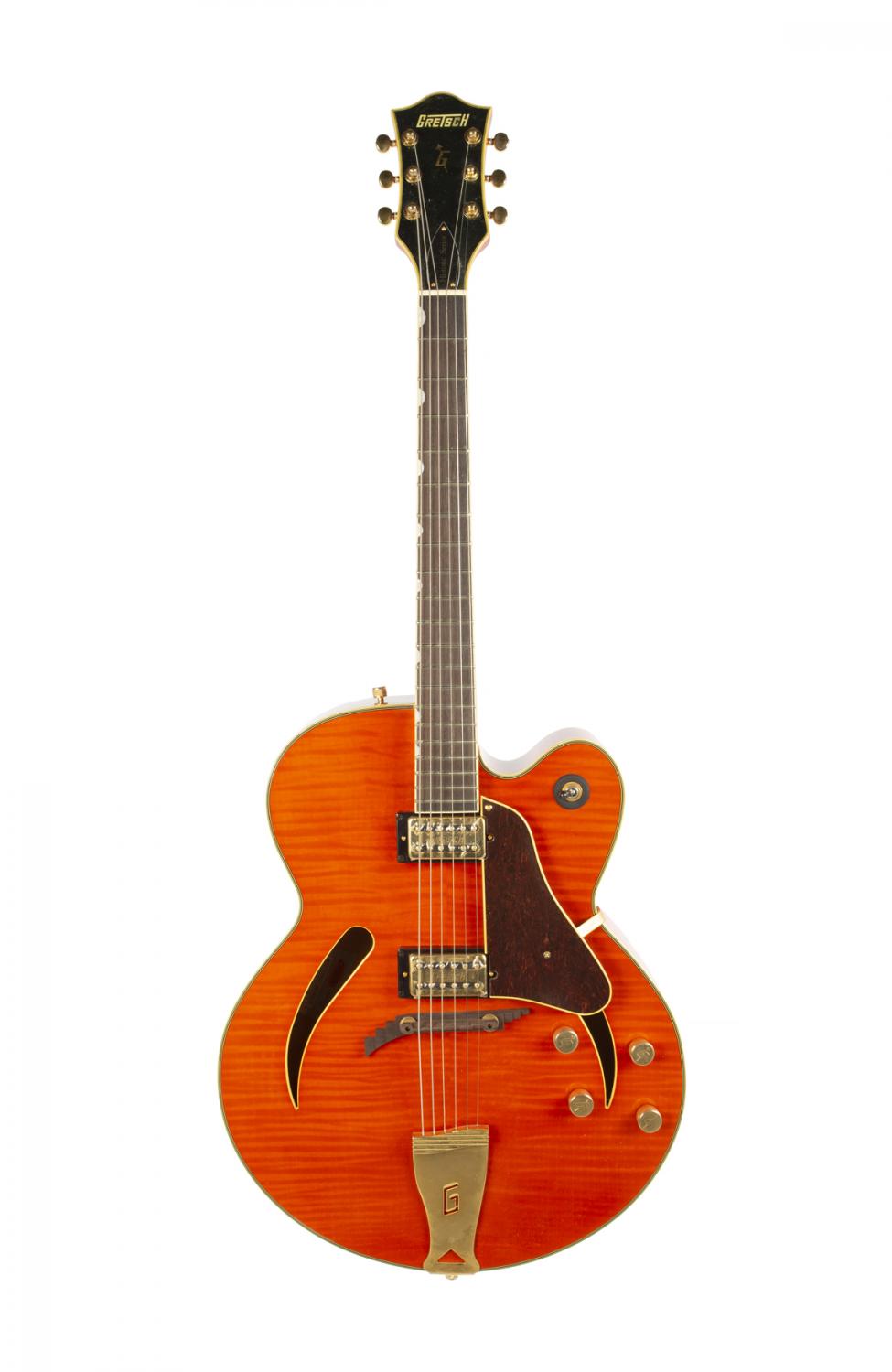 You definitely need that ,LT!

Seriously though ,that is a cool lookin' geet.

I guess it doesn't really matter who Hal was. I was just curious since his name was tied to this.

They could have presented more pic's of each guitar and better descriptions up front. Maybe that's the way theses auctions are handled though. That way they can pick out the serious buyers from the non.

Very cool collection of stuff. My stimulus check is scratchin' a hole in my pocket.

Hal Zwicke was a member here and had one of Jim S’s restored Gretsch cowboy amps. He was a resident of Savannah, Georgia so likely close to Fred & Dinah.

More than that I cannot add.

I am really having fun looking at the prices realised at this auction.

I picked up one of the unfinished '55 White Falcon projects in this auction. I guess I'm a gambling man after all, because it's unusual that I'd bid on something based on only one low-res photo.

But hey... it'll be interesting.

Anybody have clues about these guitars? Based on the prices, I can only assume they are MIJ/Terada Gretsch, but how did a bunch of unfinished guitars make it from Japan to the U.S.? Or are these some kind of pre-FMIC American made? I doubt that.

Many of the items in this auction went for completely silly money, I don't understand why. Maybe because it was a charity auction benefitting the Gretsch Foundation? Even this Falcon project I picked up was a decent price, but not a blowout.

Collin, the origins of the guitars in the auction varied a lot, but I'm pretty confident that most of them were pre-FMIC. How and why the "unfinished" examples made it to the US (especially those missing only a few parts) is unknown and a very good question. Let's hope in the end that you benefited from it with a successful Falcon project!

I watched most of the live auction Friday and Saturday on the Juliens site. It was Bizarro World. I watched it "with" Ed Ball and Olivia Anne (I was texting back and forth with them), and we howled for two days. The auctioneers totally oversold the "prototype" identification, and the bidders ate it up unquestioningly. Most of the Electromatics, Historics, and Synchromatics were not worth the $1,000-$2,000 prices they fetched (plus that 28% buyer's premium––ouch). But a few of the Electromatic prototypes from the early '90s were quite interesting, as a handful of them were outfitted with Bigsbys and FilterTrons and strongly resembled Pro Series counterparts.

I do predict an epidemic of buyer's remorse. I kinda have some myself, but I didn't win anything. The '90s left-handed Silver Jet in need of parts and labor that I had my eye on went higher ($2,560) than than a good-to-go lefty '77 Country Gentleman (only $1,500), and I could not justify another bid... especially after I saw the condition report, which arrived about an hour before the auction for it began. The Gent was auctioned earlier than the Jet, and I didn't bid on it because I didn't want to deplete my (limited) funds and come up short on the Jet (which happened anyway). If it had been after the Jet, I would have gone after it as a consolation prize. Oh, well.

One of our GDP members won the cutaway version of Lacking Talent's recent acquisition. It was a consolation prize for him, as he had been outbid on his #1 choice a little while earlier.

Project-seekers: a large new wave of Southern Belle husks will likely hit the market soon. They sold 30 of them––in three lots of 10 husks each. Buy in bulk, sell individually for profit, as so assured by the auctioneers. I believe the most paid for a lot was $2,560, so if you want one when they show up, adjust fair value accordingly.

Thanks FF909, yeah a lot of this stuff seemed to go for absurd prices. I can only assume that is a factor whenever there is an auction benefitting a nonprofit organization - the purchase becomes a tax write-off. Or at least that's how I understand it.

Was really hoping some of these unfinished projects would only go for the advertised $300-500 prices, but it ended up almost double or triple that in most cases.

I'm still amazed that auctions can function like this in today's market. One photo, strict rules and yet still high prices? And the auction "estimates" are always low because no auction house in the world wants to overestimate a sales number. They'd rather aim really low and then boast later about how well their auction "exceeded expectations."

Personally my interest was more in the Gretsch factory memorabilia, but even then it was Baldwin era so a li’l bit meh.

I’d’ve loved to have one of those cool workbenches, but being over here in Blighty kind of ruled that out.