I had a set of little blue Yankees and grey Rebs. I've seen Cowboys and Indians, and medieval knights,too. Little soldiers go way back to when they were made of lead or tin and fully painted.

It has to be the hot wheels cars and the drag racing kits. I got one from my uncle and I think it's still somewhere in the attic. I used to get a lot of gifts as a kid as our family was huge. I can recall the bags that were left in my room every Christmas and Easter with gifts of all kind. There were of course clothes included too and my mother felt relieved as she was spending less money for that haha. I wish I had the same for my kids but since we don't have that many siblings left I still Google for children clothing stores to find deals and nice clothes for my two baby daughters.

Our old west outfits. My older brother was always the hero, I was the sidekick, the Sancho to his Cisco Kid, the Gabby Hayes to his John Wayne. For Christmas he got a Mattel Fanner-Fifty (with holster), I got a Chuck Wagon toy. Now that I think about it, this describes most of my relationships ever since.

My Dad thought that action figures were dolls and wouldn't contribute to that. "Boys don't play with dolls."

Outdoors: My bicycle. No question. Learned young. It was replaced by a skateboard when I was around 12 yrs old.

I had Big Jim and Big Josh (same dude, just with a beard, I think?)! Had the Sports Camper, too. Hmmm, two buff dudes in flannel go camping together...

I also had a number of cool GI Joe toys. A yellow helicopter that had rotating blades when you continually worked a button on the side (great thumb workout for future guitarists).

An older cousin of mine gave me his GI Joe John Glenn Mercury 7 space capsule, which came with a 45 rpm record containing the transmissions from Glenn orbiting the Earth. Wish I still had that; apparently the vintage ones in good shape are commanding some pretty good coin. It looked like this, but I think this is a more contemporary re-issue, with a few design changes.

This is quite a timely subject though, because just yesterday I received my shipment from the Beatles Store.

I had this die-cast metal Yellow Submarine Corgi when I was a kid (8 or 9?) and it got lost over the years (I think it went to one of my nephews). In more recent years, I began to wish I still had it. Vintage ones are a bit cost-prohibitive. Didn’t know that they had started making them again a few years ago for the 50th anniversary of the film.

It's cool to have it again; a bright little totem of joy. And I suppose the submarine is a fitting analogy for the times we're in. We live in our own isolated confines, immersed in a sea of uncertainty and meanies, with the need to surface every now and then to get some fresh air and perspective.

Or maybe it’s a regression to childhood's innocent joys? That's okay too.

Definitely Lego and Nintendo when I was little. I had some Ninja Turtles action figures too.

As I got older: ice skates, bicycles, D&D, then guitar.

An Erector Set which gave way to a train set which stepped aside for a bunch of Cox airplanes. Toys with electric and gas motors always fascinated me.

Still have the train (somewhere). At one point it became so involved Dad let me set it up on the ping pong table and there it stayed for a year or two.

The Cox planes were gradually replaced by a newer model, the older one usually making its farewell voyage in flames. Quite a sight at sunset.

Inside: Erector set (still have it) and Lincoln Logs.

When I wasn’t building Revell custom car models I was wearing down these. The vast majority of my childhood was spent drawing pictures or building models.

I got a Matell Virtibird RC Helicopter for Christmas when I was 12 years old. These things were amazing, I got the Airplane equivalent, the Dareplane Stunter the following year. These were some of the earliest electric RC flying toys available, and they were loads of fun!

The Dareplane was a very lightweight bi-plane, that flew circles around a motorized base pylon, that spun the center of a flexible cable (4' and 6'). The spinning cable center drove a set of gears, which spun the propeller. The pilot (kid) controlled the elevator, rudder, and power (propeller speed), via cable set connected to the base station. The bi-plane was capable of some very imaginative stunts, crashing being the easiest stunt to perform! It was in essence, a real airplane that you couldn't just sit down and fly. It took practice and patience to become a Dareplane pilot, then it was possible to do loop de loops, floating stalls, and whatever else you might be able to pull off with a cable driven airplane.

Being raised in the then Territory of Alaska, I have been armed to the teeth sense age 10 or so, real guns, real knives, real camping gear. Did we play cowboys and Indians? Yep! Did we use real (unloaded) guns? Another , Yep. Were there casualties? Only one that I remember. First BIG rifle at 14, nice 30-06, still have it. When there is no money for toys, you make do.

My grandsons didn't believe me when I told them how much fun a pile of dirt was. Little green soldiers, cars and trucks, tin can for digging. We'd be out there for hours. Behind our yard were acres of oak forest. Folks couldn't keep us indoors.

I was way into Hot Wheels and the full sized GI Joes. Later I got into HO slot racing. Being born in '61 I was a prime target for TV toy commercials. Like many, I was part of the Saturday morning marketing demographic; nothing but toys and sweet breakfast cereals!

I held onto a lot of my old toys, having kept most of them in good shape. I entertained the notion that all of that stuff would be worth a lot someday. But it turns out there is a window of value for collectibles, especially toys.
The 'desire factor' for past cultural ephemera comes in waves, usually coinciding with a generation's life stages, coupled with feelings of nostalgia and some disposable income.

There might be more than one wave, sometimes aided by a product reboot, etc. but at some point the collectability of something just drops off.

Anyone check the market value on Beanie Babies lately? Pogs?

I probably could have parsed out my old toys into a cottage industry on Ebay, to get more money out of it all. But was I ever going to get around to that? With an impending move, in the end it was easier to bring it all to a collectibles store in Chicago (Quake Collectibles). We worked out an agreeable cash deal for the car load. No regrets.

All that aside, I have indulged in acquiring some re-issued toys over the years.

Back in the mid 00s Hasbro re-issued a lot of their original GI-Joe line, as a 40th Anniversary celebration. I picked up some of that, deciding to keep it all boxed, just like Christmas morning.

Same with 'Captain Action', which was an action figure created by Ideal Toys. Another company re-issued Captain Action and Dr. Evil some years ago, acquiring several of the original comic licenses they had (except those very hot DC and Marvel ones! No Spiderman, Captain America, Superman, Batman)

Mattel has occasionally also gotten in on the collectible market. They re-issued their 'red-line' Hot Wheels cars years back. The original designs on recreated blister card packages. Also re-releasing their Sizzler cars at one point. 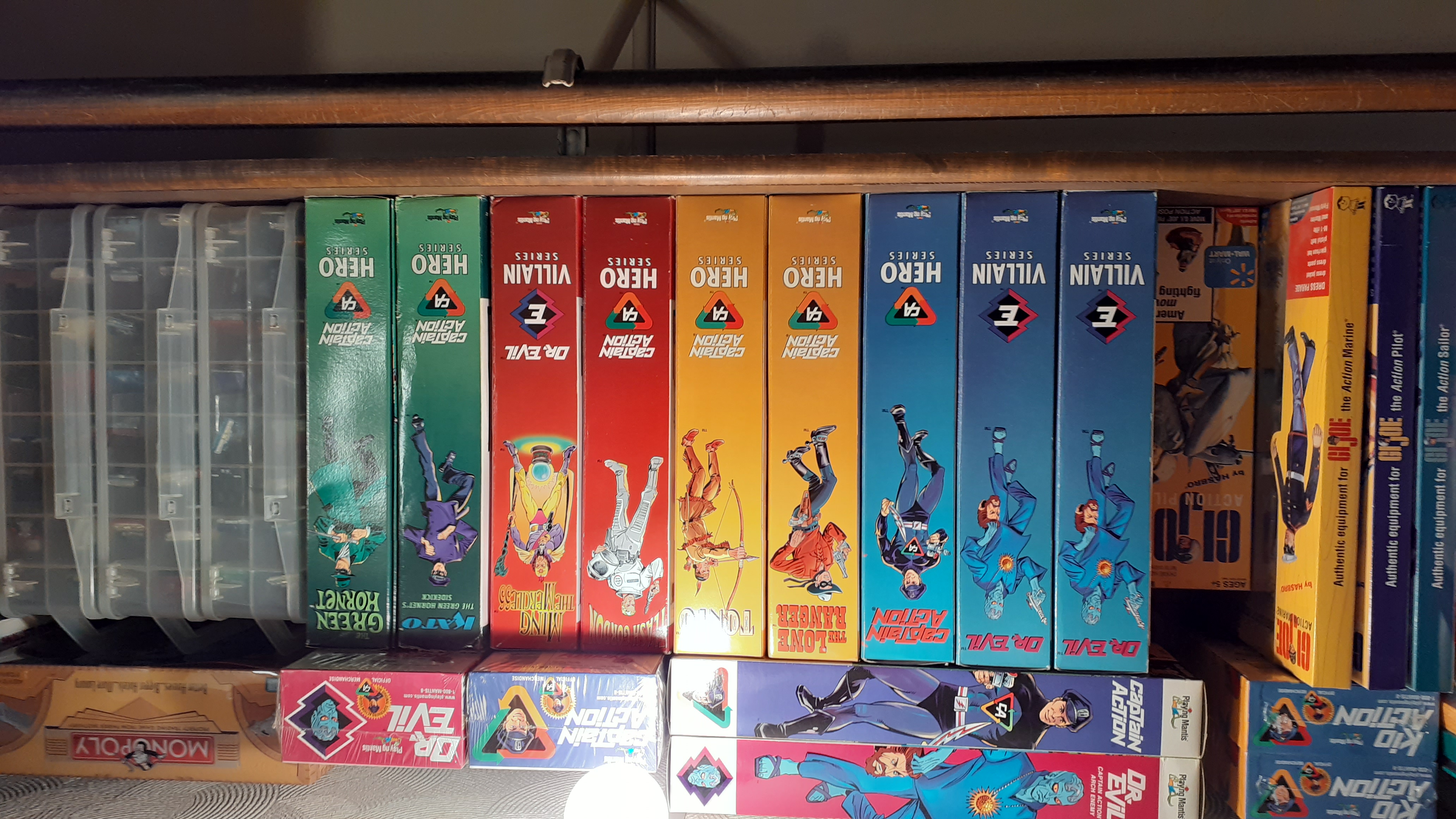 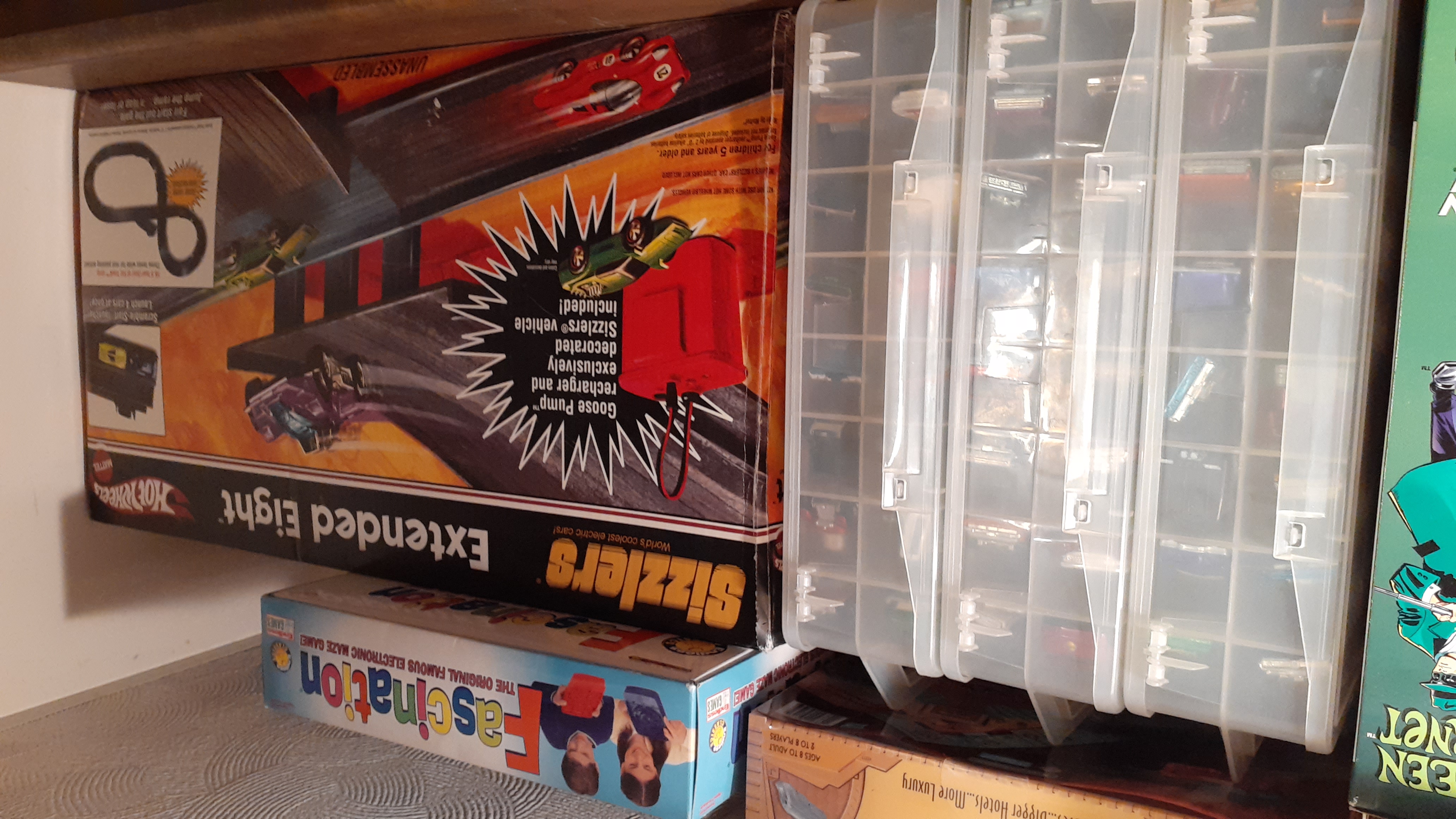 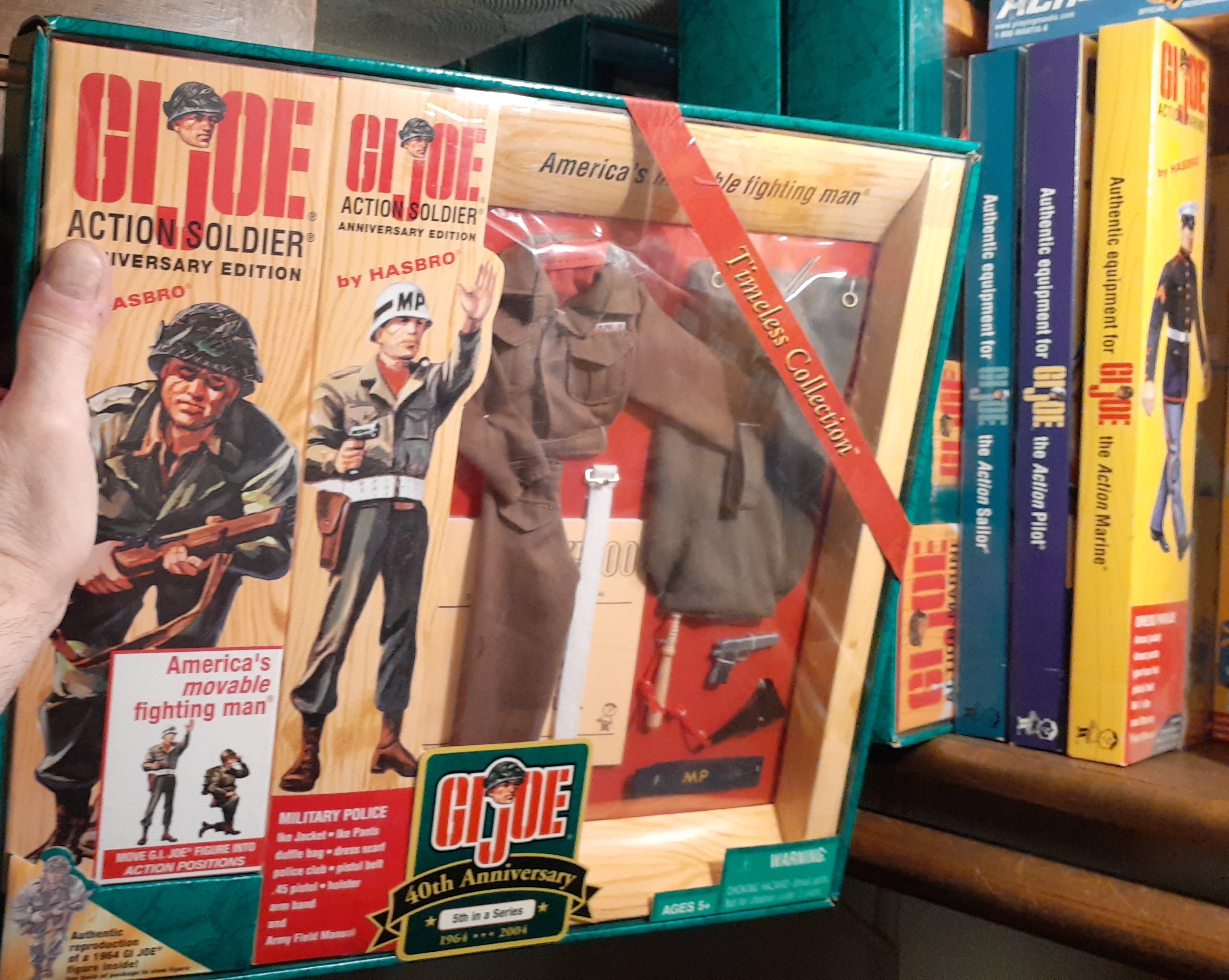 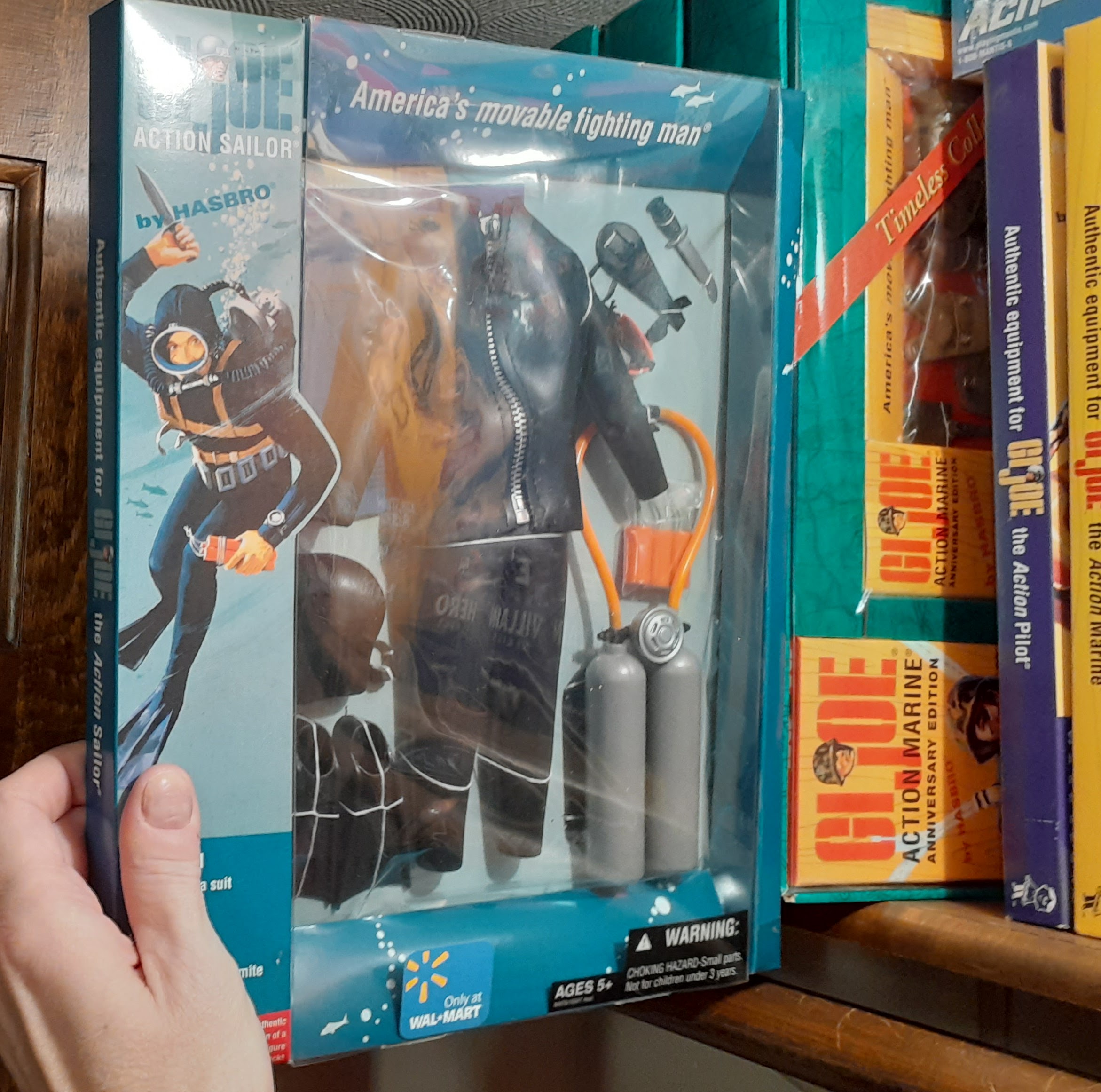 I had the exact opposite of a dirt pile, a hole in the ground! I remember digging a substantial hole in the ground in our backyard, and my dad placed a sheet of plywood over it. It was my fort for a long time. It was large enough to hold several kids and deep enough to that we could comfortably sit down in it. The dirt pile, next to the hole, was fertile soil for our Tonka Trucks! It was the best of both worlds, a hole and a pile!

This was one of my favorite Christmas gifts. The Johnny Eagle Magumba rifle and pistol. It made it more special because that's actually my name! https://www.worthpoint.com/...

I posted about "Big Jim" three years ago.

Here was my other favorite, an "Itza Ball," which was way better than "Nerf." 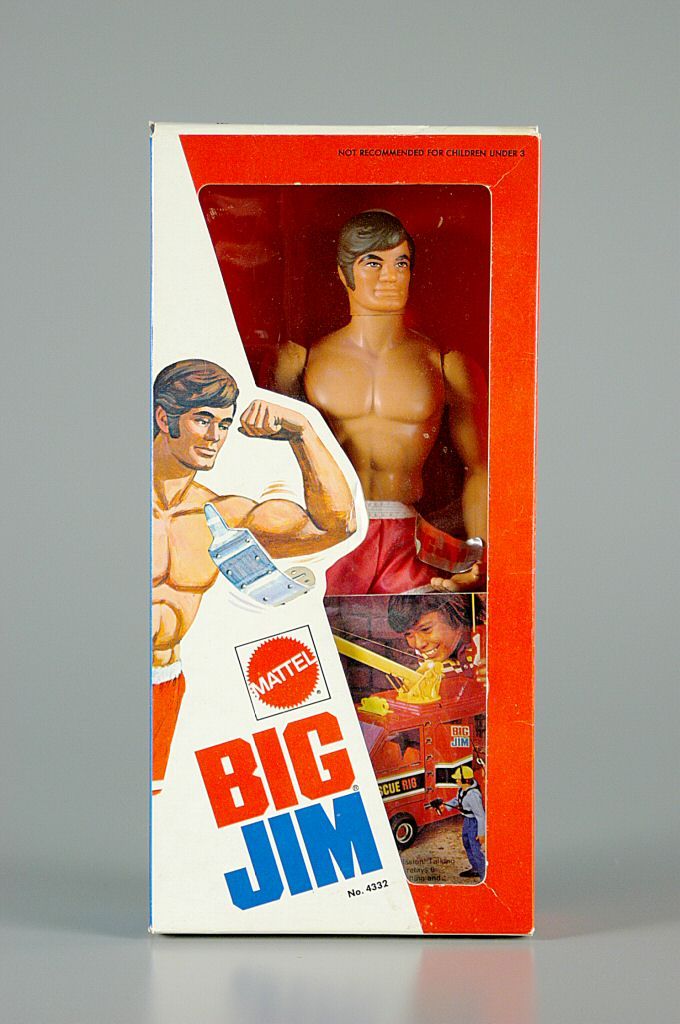 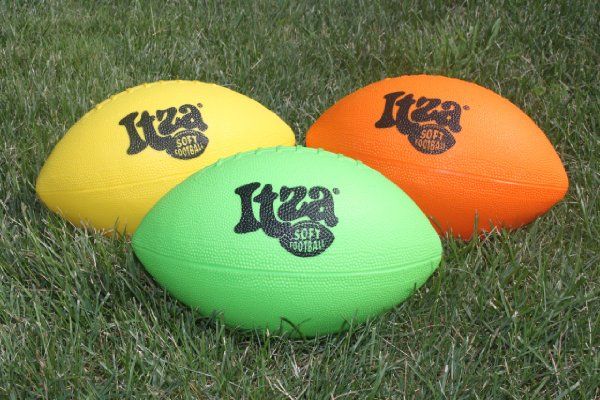 Okay, introducing my kids to slot cars is going to cost me. They love it and I only have one working car. Anyone have ho guage slot cars for sale?