As an adjunct to the other current thread regarding 'better to have one good guitar rather than several cheaper ones', I thought I'd ask if any of you own a Gretsch - not interested in other brands in this discussion - that gives you everything you want/need in an electric guitar.....your personal holy grail? A similar question was asked several years back - 'do you own a one and only guitar' - but we've seen new membership since so perhaps time to ask again and get their input and our updates

For the longest time it was my 1966 Tennessean-- really about 3 years which for me is a long time to stay with one model.

My Gretsch does everything I need a Gretsch to do. There’s not a one-electric-for-all-purposes for me. YMMV

I have a '59 6119 that I love but if i'm honest I'm more of a Dynasonic than a Filtertron guy so I'd pick my 2008 Dyna White Falcon G6136-LDS that has been modified with old hardware including vintage Dynas and 50's Melita bridge. I always come back to this guitar after playing other things and marvel at how good it sounds. I don't need it to be versatile...it just does what I love better than anything else I have and although the bridge Dyna squeals a bit it's the best sounding guitar I have with fuzz too.

My Gretsch does a lot of what I need, but it's not a solid-body, not a 12string and although I mostly play clean (which it is very very good at), there are times when I like to add a little something-something to the vibe, and if I must be truthful, I have other electrics that handle what I am giving with less drama.

But it's surprising how often the Chet does rise to the top of the list, given the selection I seem to have somehow acquired.

Good topic. I would like to cut down my collection to just one or two but am too fickle. Most of my guitars are Gretschs. The Super Chet has gotten the most play in the past year and a half but others have their strengths. You mention electric guitars and that is what I play, although acoustically a lot of the time. The Chet is surpassed by a few acoustically.

The easier question to answer for me would be to name my favorite pickup combinations. That would be the Supertron neck/classic plus bridge followed by Supertron neck/ T90 bridge combination. My suspicion is that if I ever achieve that silly goal of a reduced collection the one or two winners will have those combinations in that order, whether they be stock guitar combos or mods. A T’Armond equipped guitar would by my third choice.

I'm mainly a piano and organ player. As I'm not gigging, I can't justify a Pro Line. I have a Pro Jet and a Historic 3140, both far better instruments than I really deserve for my needs. When I plugged the 3140 into an AC15, I heard the sound that I'd always heard in my head. That was proof enough for me.

65 Tennessean. It was my main/only electric for 25 years of gigs etc etc. Still play it. I tend to try to make other guitars into it...

Somehow it was more exciting when I had just one cool old Gretsch, like having a magic sword.

The Deluxe Chet is cool too, as is my converted Convertable. I could get by with either of these in a pinch. Nice sounding, nice playing though different.

For some reason the Electro 2 seems to excel most at it's recorded sounds.It's the most different sounding of the small bunch though. I imagine if it was my only guitar, it would be the one. 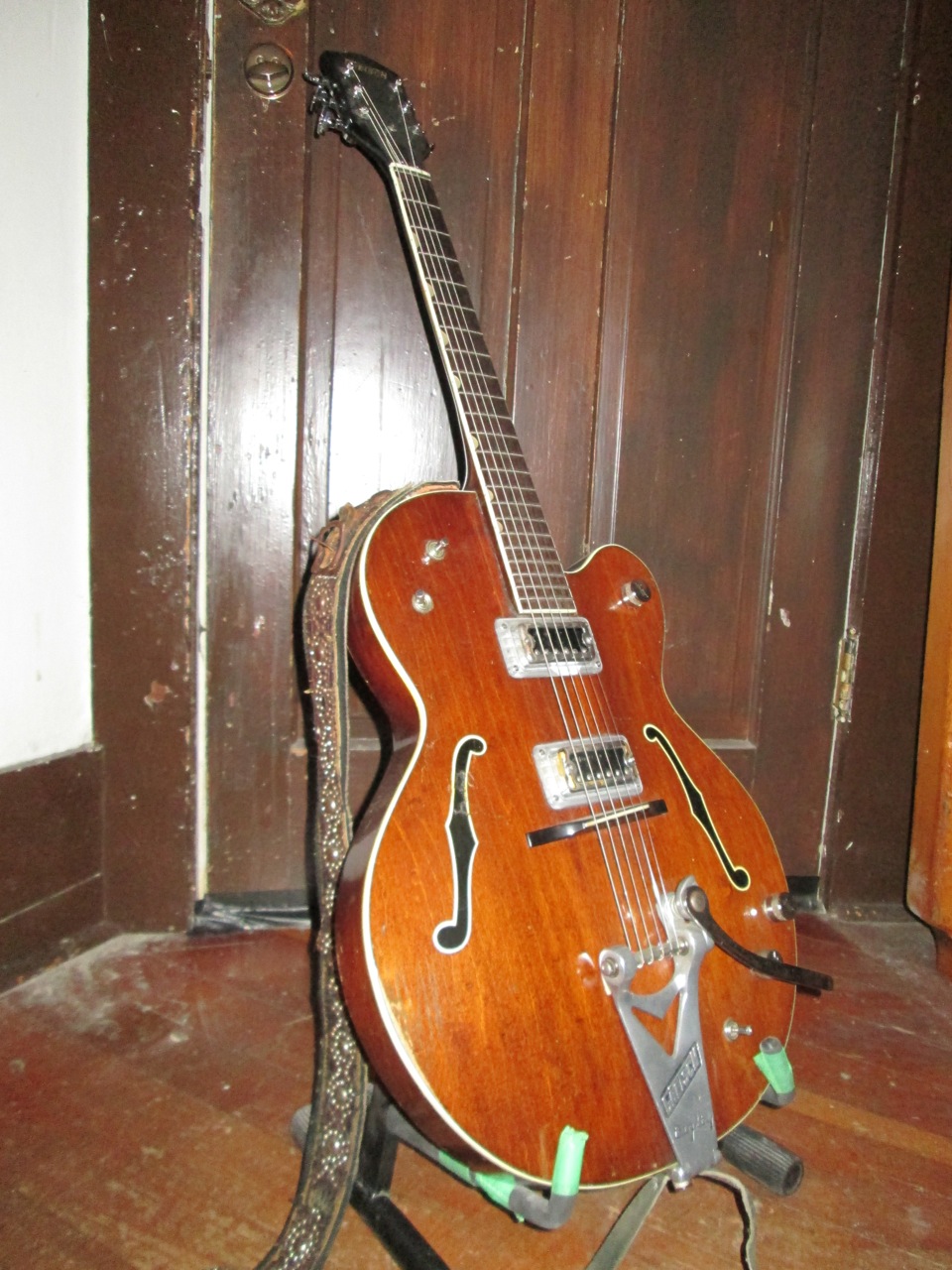 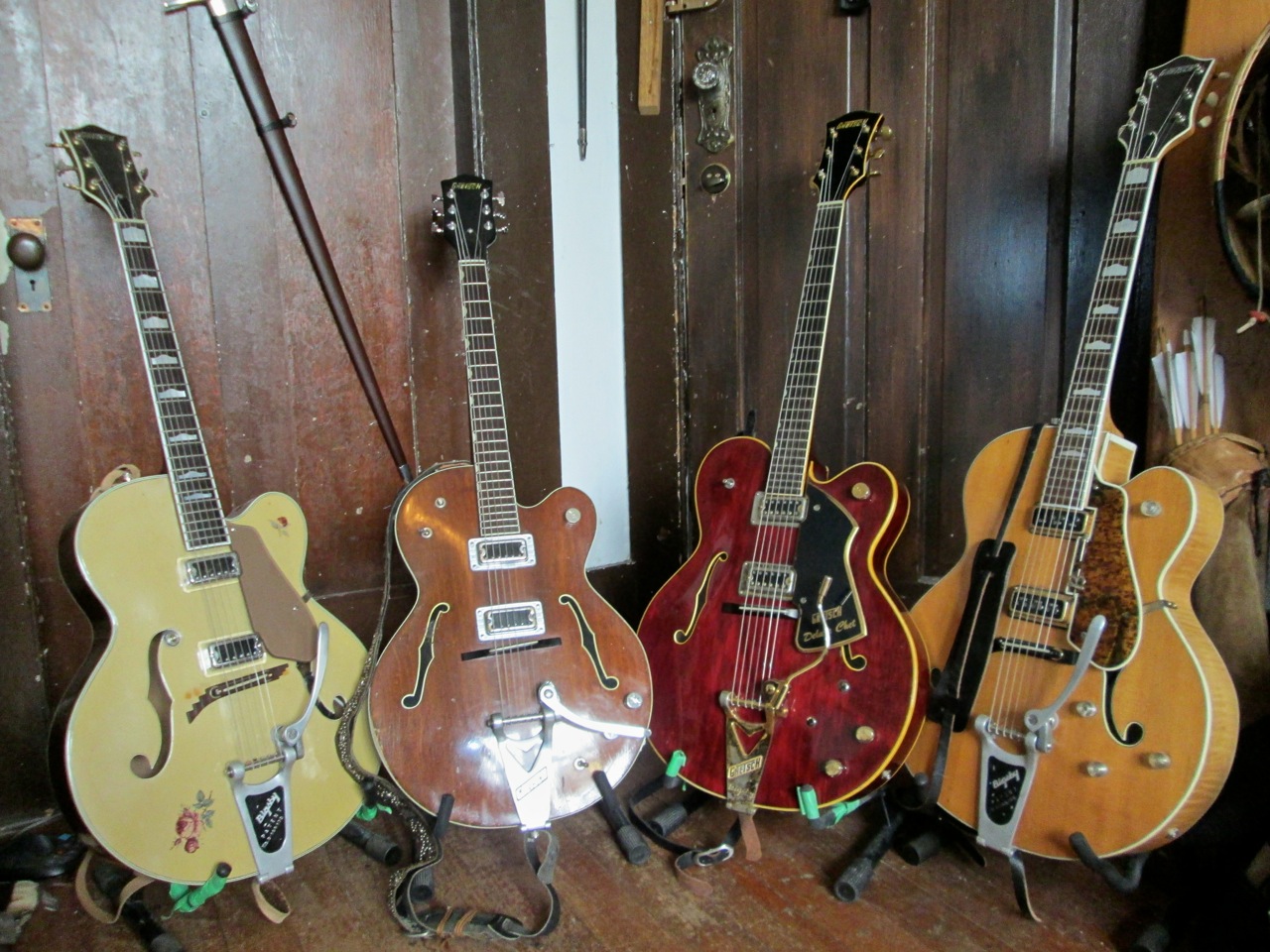 One Gretsch that does everything I need? I hope not -- that really would be shooting myself in the foot by providing a case for "why do you need more than one electric guitar"!

"Y'see, guitars are very much niche instruments -- I need this one for this and that one for that etc. And naturally a spare one for each of them......."

Actually just joshng. My wonderful Roz has always been very supportive of my musical meanderings.

No, but my 6118T with T Armonds gives me everything I personally need that isn't available from a Telecaster.

While I don't have a huge number of guitars I do like to have more than one. No guitar does everything, but for some bands I have been in the SSLVO comes close. For a number of years I gigged with just the SSLVO and it did everything I needed.

The bridge pickup in an SSLVO is a fantastic sound. Fat, twangy, honkin', all the good stuff. So the SSLVO would cover most things.

Now I would be tempted to use the '59 VS Jet, because it does pretty much everything the SSLVO does for me in that band context. The Jet comes close to "doing it all" for me.

If I start playing out again I suspect the ES-225 would be my choice. That or the Jet. Although they sound quite different they can cover similar ground.

I am partial to a couple of them right now, but being newer to Gretsches, and hollow bodies, it's been a blast exploring the range of tones found in the guitars I've more recently picked up.

One of my more versatile guitars currently, is my MIM Strat. Technically it wouldn't qualify here (being a Fender), but it's an outlier in that it's one of the only that I've modified (so far), and with favorable results.

It was a local find, used. I loved the subtle marbling on the maple neck, and the midnight wine finish.
Aside from dropping in locking tuners and a graphite nut, I swapped out the white scratchplate and stock pups for a black one, loaded with 3 Burns Tri-Sonics. Each has a toggle for on/off and in/out of phase. Essentially making it a Brian May Stratocaster.

I love the way it feels and looks, and the range of tones and control it gives me is insane.

Not the same range of tones I get from my g6120-'59 or my g6119t, but vast enough to satisfy any cravings for another Fender.

And it would be one I would grab if invited to a jam session.

65 Tennessean. It was my main/only electric for 25 years of gigs etc etc. Still play it. I tend to try to make other guitars into it...

Somehow it was more exciting when I had just one cool old Gretsch, like having a magic sword.

The Deluxe Chet is cool too, as is my converted Convertable. I could get by with either of these in a pinch. Nice sounding, nice playing though different.

For some reason the Electro 2 seems to excel most at it's recorded sounds.It's the most different sounding of the small bunch though. I imagine if it was my only guitar, it would be the one.

Yep. It's been my main or only guitar for nearly a decade, and that's following two decades of near constant flipping. Being intensely fussy, it seems I had finally found a guitar with nothing to complain about. 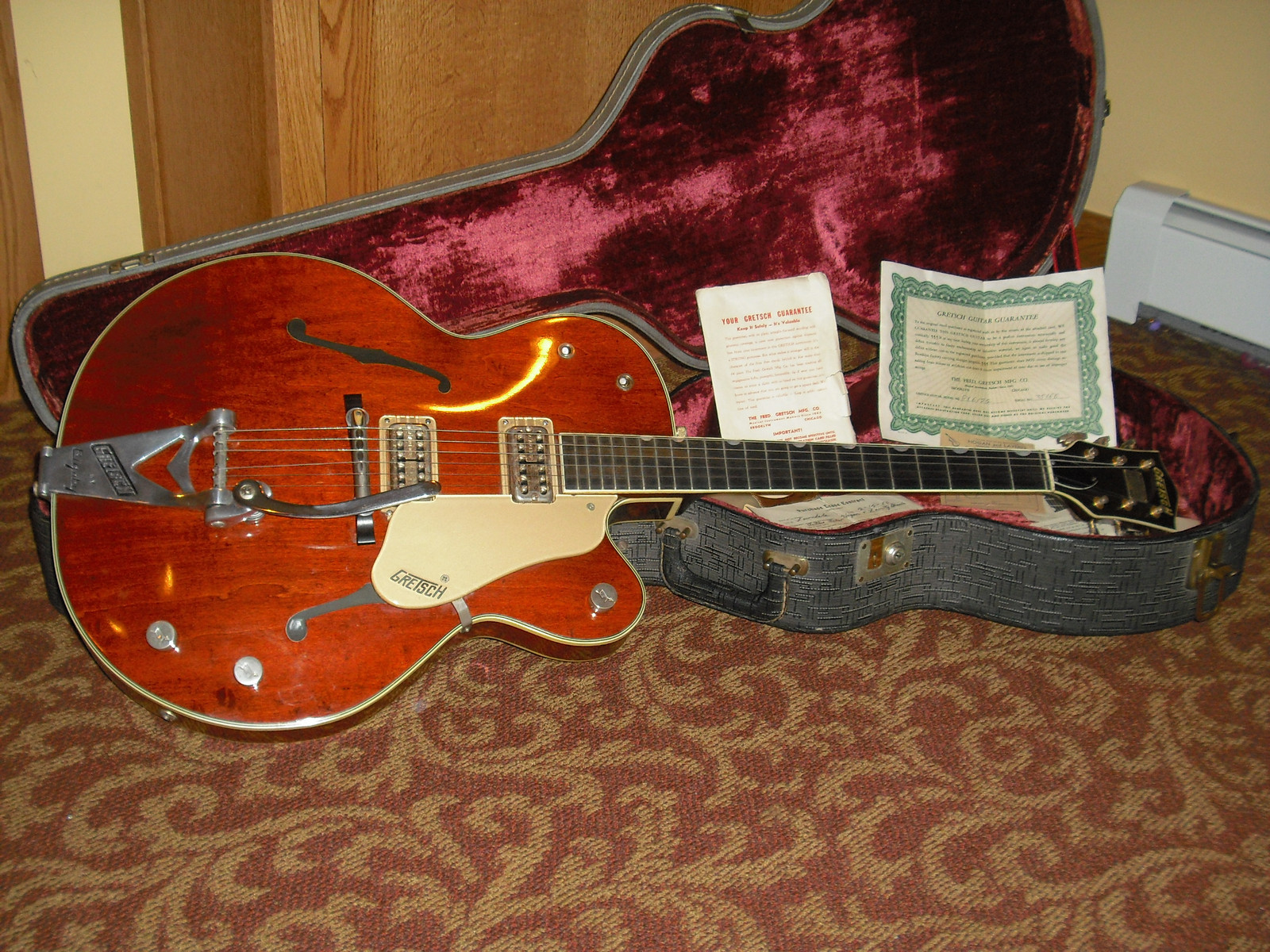 It's not a Pro Line, but my 5422 is an amazing guitar. It's got some serious mojo in it, that took me by surprise.

Yep. It's been my main or only guitar for nearly a decade, and that's following two decades of near constant flipping. Being intensely fussy, it seems I had finally found a guitar with nothing to complain about.

Tell me about the neck on that sweetheart.

No. Gretsches are a "specialty tool" in my collection. I love big hollow bodies for a lot of what I do, but sometimes I need a solidbody for singing melodic overdrive a la Carlos, or a semi-hollow for a Larry Carlton/Robben Ford kinda thang.

Yes, I could get by with using any Gretsch in my collection. I don’t switch guitars during a gig and I can play anything on any one of my guitars. I would still sound very much like me… Whatever that may be…. ; )

So yes, it could definitely be just one Gretsch. Like my 61 6121 or my 60 6120.
Just now it happens to be my 71 Tele or the mahogany Tele I built. But those choices are not because other guitars wouldn’t do the job…
I never wanted a guitar collection but I don’t like selling guitars. So I just happen to have more guitars. I don’t really need them …. ; )

My Duo Jet excels as a rhythm guitar and for other players it would also excel as a lead guitar. For the sound I look for in a lead guitar my Strat with a Power'Tron in the bridge delivers exactly what I'm after. If I was singing lead and playing rhythm guitar with another guitar player handling the lead guitar role in a live setting I would use the Duo Jet exclusively. Besides sounding great it blends with other guitars perfectly. In the studio I used it on every track I recently recorded paired with other guitars. So my answer is yes and no depending on the situation. It is the guitar that from my perspective has defined "my sound", whatever that is.