This clock was made in 1958 by my great uncle and hung in my Grandmas house in Nebraska until my Mom swiped it. Then I swiped it.

When I was a kid, my mom found an original bakelite Kit-Cat Klock with the moving tail and eyes. It hung in her kitchen for many years. Such a great memory, that I bought a modern battery operated version which still hangs in my kitchen. Did anyone else have one growing up? Apparently, wikipedia says they still sell at an average of one every 3 minutes for the past 50 years.

This was given to my great-grandfather in 1949, for his service to Victorian Railways. Has been passed down through the family and now in my brother’s possession.

Ironically, it runs fast, unlike our trains !!

I have a gorgeous mid-1930's Canadian made wall/baby grandfather clock. I picked it up years back when I was in the antique business. The fabulous all black walnut wood was covered in a terrible, thick cherry colored shellac which took me days to strip off. Clock in the upper half with glass cover and the bottom glassed in with brass ribs. Unlike Westminster chimes - which to me are insipid and weak sounding - this one has 3 long steel rods hanging into the lower area that give the double bong for each chime a beautiful, deep, throaty, resonant sound when struck. Puts a lot of regular size grandfather clocks to shame when it chimes. Winding lasts one week.

When I was a kid, my mom found an original bakelite Kit-Cat Klock with the moving tail and eyes. It hung in her kitchen for many years. Such a great memory, that I bought a modern battery operated version which still hangs in my kitchen. Did anyone else have one growing up? Apparently, wikipedia says they still sell at an average of one every 3 minutes for the past 50 years.

My high school hangout was the Black Kat Diner. Mom would drop me off before work so I could have coffee and a doughnut before school started.

This clock was made in 1958 by my great uncle and hung in my Grandmas house in Nebraska until my Mom swiped it. Then I swiped it.

Yes I did. The inlays on the other clock I made from scratch as well. Both clocks were drawn up from pictures of historic clocks. Lot of hand work involved in those.

It was my Father's, purchased while on a trip to Egenhausen to see family.

We'll need to watch it for a while, then set the Cuckoo and the Time.

I remember being with my Mommy when she found this now beautiful old clock. She collected them over her whole life.

A wedding present to my grandparents circa 1916. They gave it to my folks in the late Forties and I inherited it 10-12 years ago.

It was black, and all of the gilding was but a faint outline. I remember seeing her with her brush restoring her, then revealing her beautiful wood. I LOVE hearing her chime. I know nothing at all about her. Our local clockmaker is gone. So, I try to take great care of her.

And here's their wedding pic.

A wedding present to my grandparents circa 1916. They gave it to my folks in the late Forties and I inherited it 10-12 years ago.

To me, that's very elegant and stunning.

Made this from an old Bacharach Tempscribe I found in a building I was remodeling.

It was 1984, and I was 19, just out of high school. All my buddies were in their first years of college, but I skipped mine because I had a hot, older girlfriend who worked in downtown Dallas. I decided to get a job down there instead of go to school.

Here comes Christmas of 1984, and I'm getting a decent paycheck for a teen. So, I wanted to get my parents something awesome for Christmas. I always liked seeing grandfather clocks in movies and on television, so Amie (gf) and I, started looking around Dallas at clock stores. I found one I like, and for a teen, this thing cost me some $$$, but I was determined.

I bought it, and had it delivered on Christmas Eve. For the life of me, I do not remember how I got it there, and how I hid it until Christmas morning, but I do remember all of us getting up to open presents. I had somehow placed the clock in a nice corner of the living room which was opposite of the front room where the tree was. After some time, I finally got my parents attention and pointed to the clock. They were amazed.

When the time comes, my parents are both 87, I know what I want most is the grandfather clock, and the guitars that belong to my dad. It is common knowledge in the family that these are the only things I truly want, or will get.

Addendum: The gf and I broke up over the summer, and I was in community college the next Autumn.

A hot, older girlfriend is a terrible reason to skip your first year of college.

A hot, older girlfriend is an AWSOME reason to skip your first year of college.

When I think of grandfather clocks, this always comes to mind...;) 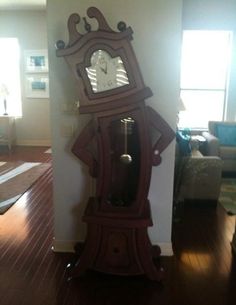 This one arrived from Germany a couple days ago, now happily mounted with Music and Dancers to go along with the charming and alarming Cuckoo.

About as ornate as they get, fantastic Wood Carvings of Hunt scenes...

I had two distinctive clocks in my youth while growing up (to the extent to which I grew up). One was a family heirloom from my dad’s side of the family. It was very pretty and chimed every 15 minutes. My two older brothers and I inherited the responsibility of winding them as we became old enough to do it without damaging them.

The other clock was more curious. According to my mom, this clock, less elegant than the chiming one, if Shakers had made clocks, this might have been one of them, came into her grandparents’ possession in the 19th century when they bought it from a family that was traveling cross-country (in a covered wagon, I’m told) and ran into financial difficulties (as I recall, their ox died and they needed to buy a new one). This clock had two big weights, one on either side, one to power the clock (via its brass pendulum), and one to power its “chime,” a shrill bell that rang on the hour, if you wound its weight. We never wound the chime weight, but the other one was our responsibility, and this clock kept pretty good time up through my teen years. Then it stopped. Despite my tendency to, as the youngest sibling, get blamed for everything that went wrong (usually with good reason), I don’t recall being held responsible for it.

But my dad, who could fix ANYTHING, was astounded when he disassembled the clock and discovered it had run for over a century with WOODEN GEARS, and one of those had lost a few teeth. But even he couldn’t fabricate replacements for those wooden gears. So on the fireplace mantle it stayed, unmoving, though it was accurate twice a day (if you know what I mean). I don’t know what happened to either clock, and I don’t have pictures. Why? Well let’s just say those stories you hear about wicked stepmothers are based in truth.

So I have no more provenance than these memories. But it’s true. Honest!

This clock hung in the Fitchburg Savings Bank in Massachusetts during the first half of 1900s. My Dad’s Uncle Ralph (who worked there) was given it during a remodeling. I have inherited it, though it’s marble face is heavy and I don’t have a place to display it. Although it has been in my life my whole life, it doesn’t exactly fit my Mid Century aesthetic. Made by E. Howard & Co. (no relation) of Boston.

This was my great grandfather's clock. Made in France by Bayard. I haven't wound it on years. I probably should before things seize up.

I've got a decent collection of cuckoo clocks because I have fond memories of the one my family had when I was a kid. Unfortunately I'm not allowed to have any up in the house because my wife associates them with her evil stepmother

This is my Grandfather's Seth Thomas 8 Day clock that was gone from our family for a number of years. I never met my Grandfather as he had passed before I was born.

During a trip in the early 80's with my father to visit relatives in NE Pennsylvania where he was from, he was told that a family living nearby had his father's clock (not sure how they got it... possibly purchased from a relative??) that they would like to give 'back to the family'. Somewhere along the line, they had painted it with the black speckle paint seen in the current photo(ugh!). So, like Olivia Anne's clock, I need to refinish the casing.

I have memories of hearing my dad winding the clock on the weekends. It still runs and chimes, although it needs some new hands and a possibly a new face, along with the restoration of the wood. I had let it run down a couple months back, but this thread inspired me to wind it back up. Thank you!