I actually forgot I did this...

A string of castle visits in Poland during safer times...

Dzien kuja! Thanks for the history lesson. Poland was surrounded by enemies.

When are you going to Malbork?

I love a castle! We don't have too many in Australia. I visit as many as I can when in Europe.

We likely have even less castles than Australia, being a young country. I've been fascinated by them all my life.

I'm obssessed with them, actually. But I don't get to travel much around Poland now--and really, due to work, I haven't been able to for a while. We did get out yesterday though--took a hike down by the river. Was pretty, but there was lots of mud.

Better pick of the Swider River going into the Vistula...

Here's something...i live next to Hastings Castle. Famous for the Battle of hastings which wasn't actually fought here. And there wasn't a castle built until afterwards. Funny place, England.

My partner and I had a lot of fun along with my brother last September visiting his wife's family in north central Germany. She's from a tiny village called Talliter that has a few hundred residents and has been that size for centuries. Not the touristy part of Germany for sure as its mostly agricultural. So many castles, ranging from piles of crumbling stones, to stabilized ruins, to fully restored ones with hotels and conference centers inside.

Many of the ones we visited were 'off the map', as it seemed like wherever you went in the countryside, if you hiked up to the top of the nearest hilltop, there were stone ruins.

Like Konrad said, often the guy in one castle had issues with the guy in the next castle. I guess jerky behavior is a constant in human experience.

One really spectacular set of ruins is the Weidlesburg Castle; stabilized ruins you can walk through with a steel stairway that goes up inside the largest tower with an amazing view of the countryside.

I like castles. We saw as many in England and Ireland as were anywhere near our route during our Y2K visit.

A favorite memory: white tradesmen’s vans are a familiar sight everywhere, the panel-sided variety with roof racks for ladders and other equipment, a business’s logo, slogan, phone number, and wwwdot emblazoned on the sides. Parked outside Lincoln Cathedral, I saw one belonging to a handyman firm, slogan Castles and cathedrals a specialty.

You don’t see that in the USA.

Cool pics and comments. I wish I had my pics on this comp from my time in the Czech Republic and Slovakia--now those were some cool castles.

Konrad, what a great guided tour. Loving the gruesome details!

I got to check out quite a few when I was stationed in England a lifetime ago. Some were mere ruins, some restored and now museums. In England, many castles were built after 1066 to impose Norman rule over the Anglo-Saxons. One of the most fascinating, and with many stories about it, is the Tower of London. It's a must for anyone visiting England.

I love me some castles.

Is the Alhambra considered a castle? There's alcazabas here in Spain which are fortresses I suppose, and there are castillos.

Oh boy oh boy!!! What a cool video Konrad, I streamed it to the tv to watch it. I loved it! Before you said the castle is known for it's ghost I said the wind that made it hard to hear you must be a ghost. Haha!

My partner in crime and I are also very much into castles... so much that I just checked my photos from the last couple of years and I came to a selection of 54 (!) photos.... I guess that is too much to share, but I will try to make a smaller selection to share. I kinda tend to loose control about this subject.

Did you know there are two more than fantastic castle documentaries on Netflix? Good for many many hours of CASTLES ONLY and their history explained. I watched those episodes over and over. They are called 'Secrets of Great British Castles' and 'Tales of Irish Castles'. You can even find a few more specific documentaries about European castles if you simply search 'castle'.

I took this photo of the castle of Bourscheid in Luxemburg about two years ago. We rented a mobile home on a campsite that was located higher than the castle. We enjoyed this view every night for a week. Although we have visited this castle many times, it never gets boring. 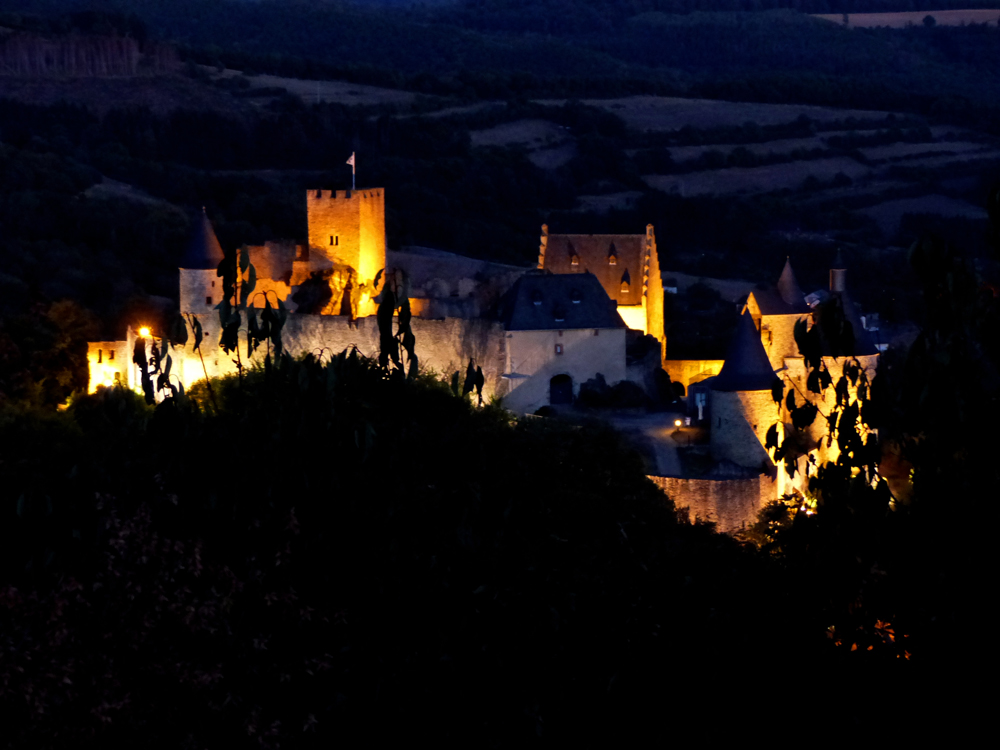 Luxemburg is a great, petite country to visit if you love castles. They have over 40 castles and the country is only 2.586 km². Some are too 'young' for my taste but we have visited quite a few. One of our favorites is located in Beaufort. They still have some torturing devices, which is fun! Since it is situated so close to a hiking trail straight through the forests we love to go there too. 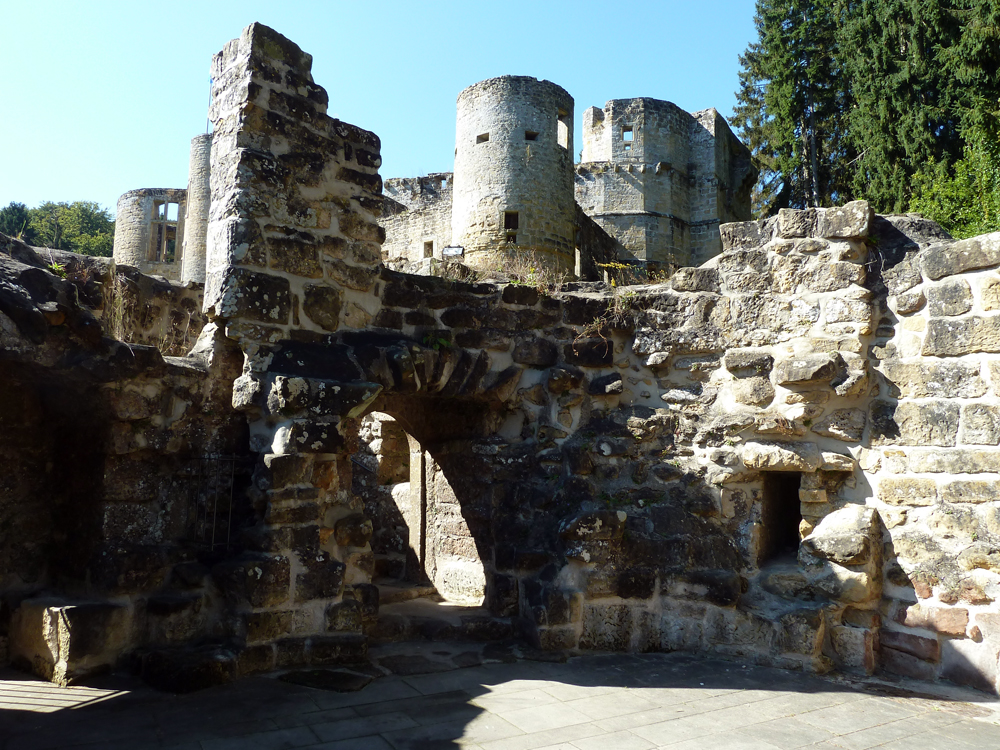 We always travel with our dog, most castles accept dogs except the castle in the city of Vianden. Also worth it without visiting the museum. It is quite a steep hill to the castle starting near the river Our. 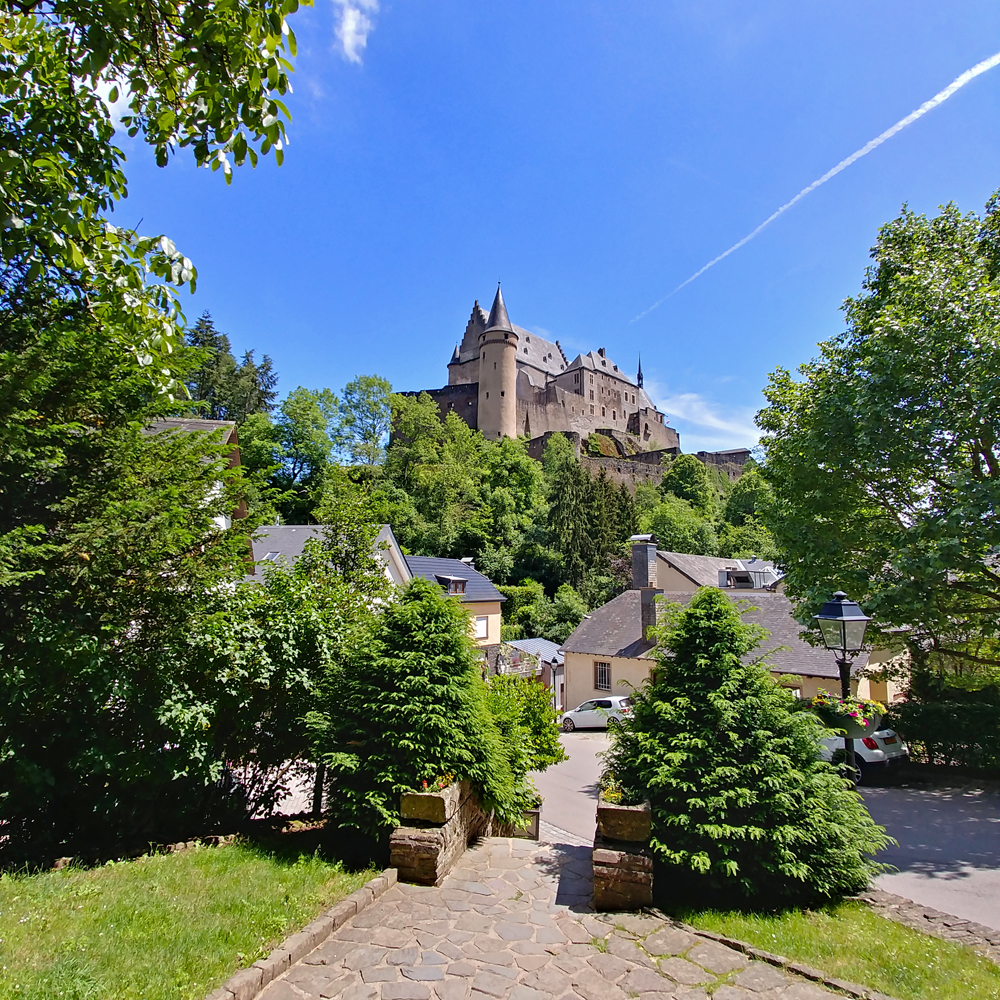 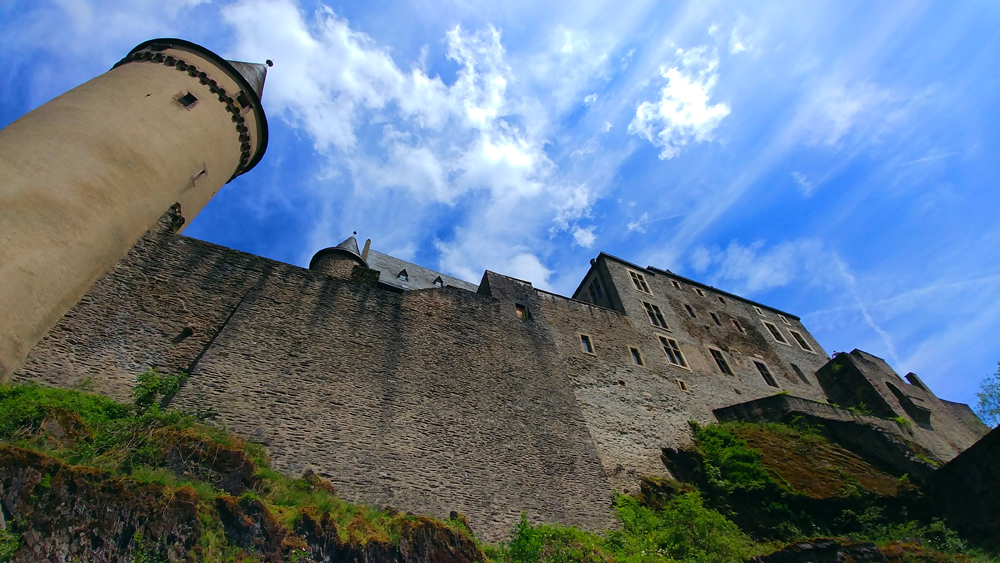 Larochette is also lovely, amazing views and a nice terrace to enjoy 'kasteel bier' (Castle beer). It actually is a castle ruin. 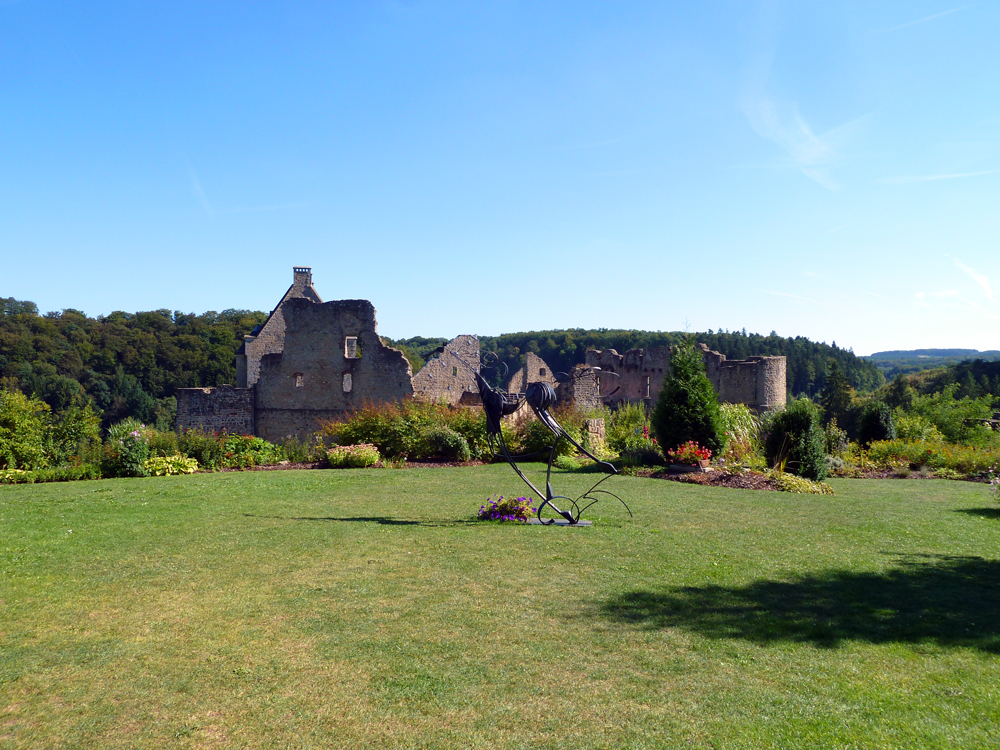 This is our favorite spot at the Bourscheid castle. We like to picknick there and spot lizards. 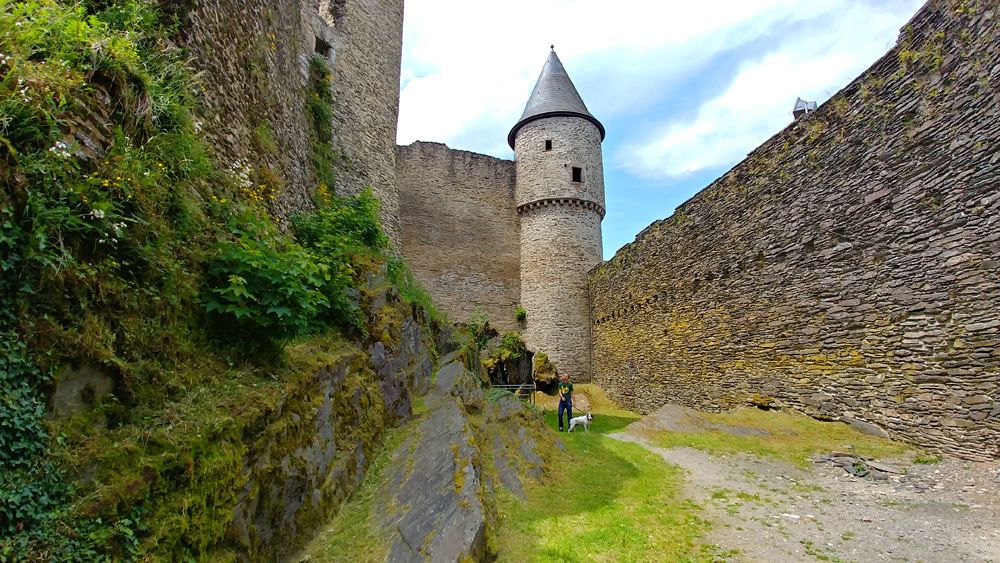 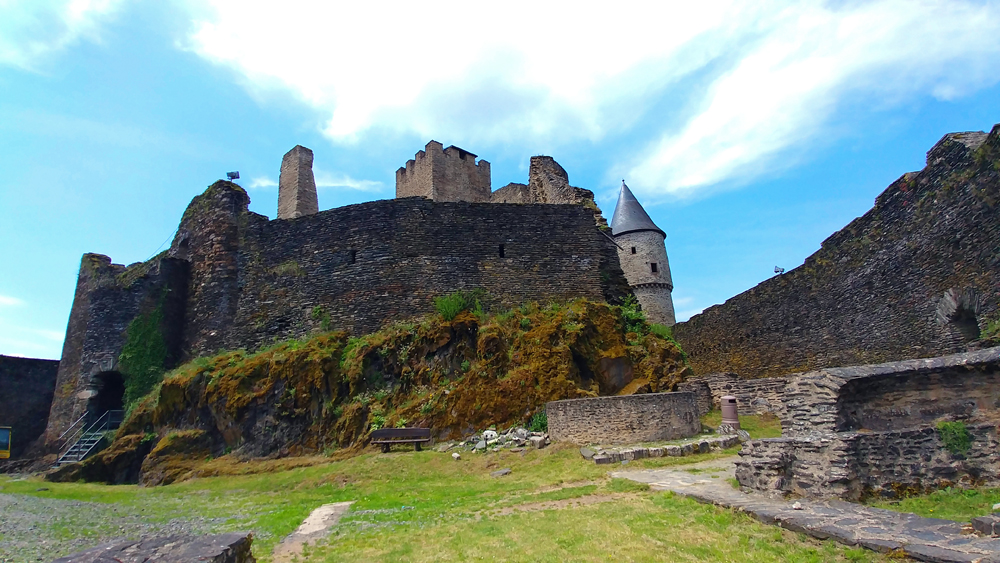 In Esch-sur-Sure you can find a lovely castle ruin on top of the small village. Also quite steep to get there but totally worth it. The small chapel of the castle is still standing. There is a brocante/ indoor flea market in the village on route to the caste. Awesome place! 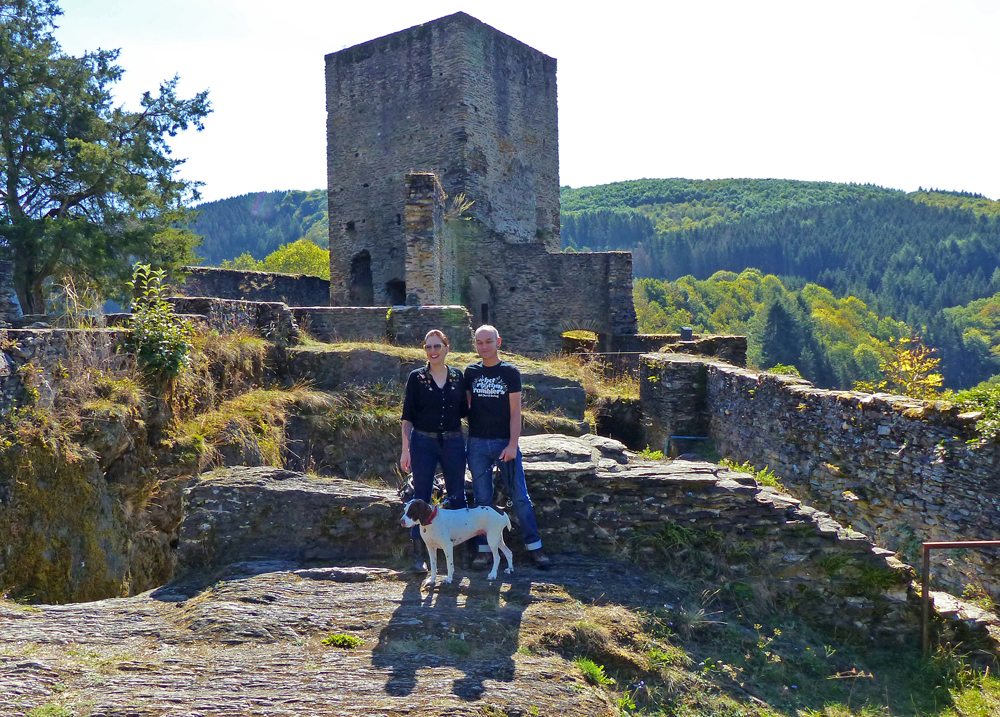 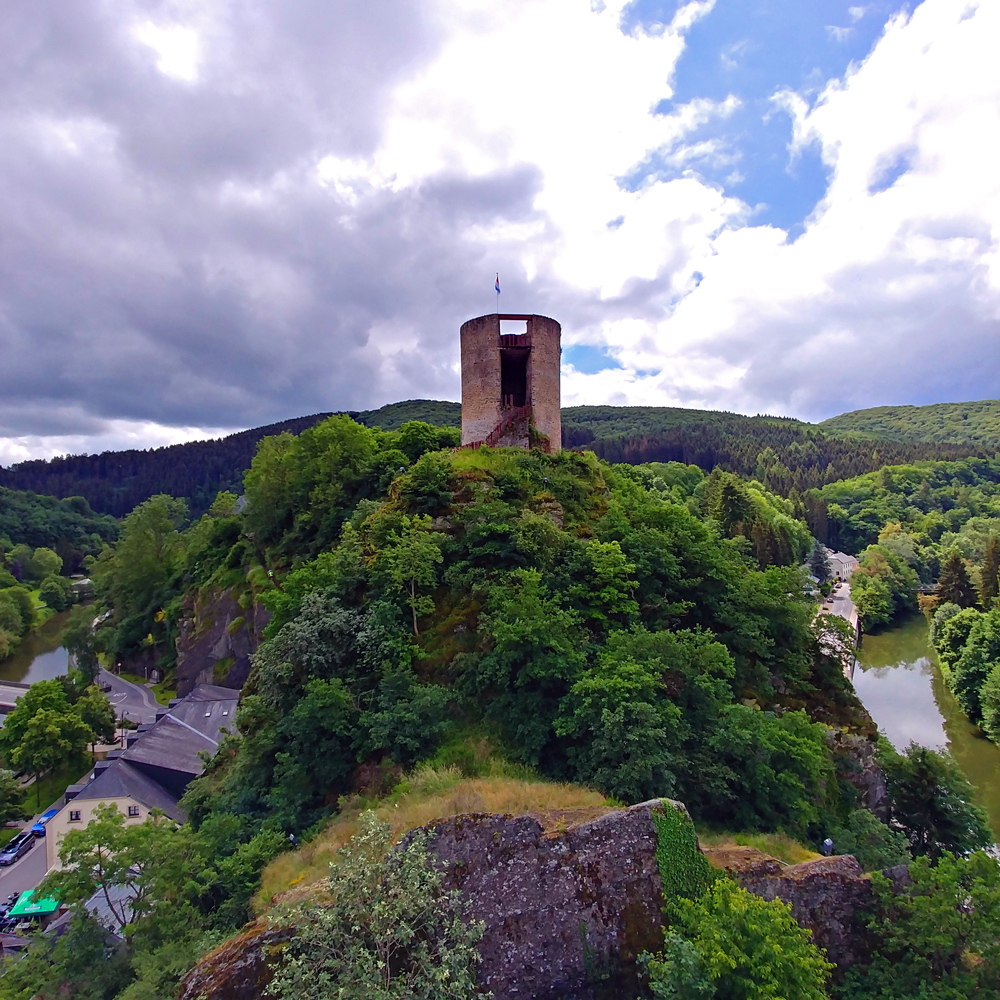 In Switserland we have visited the Rhone Valley. There are two castles located on the top of two hills, right next to eachother in the city of Sion. I believe the castle we visited is one of the oldest castles that is still standing. You can actually feel the vibe. The castles date from the year 999 and 1300. One of the castles still has a church which was breathtaking. I truly hope to visit Switserland again in the future. The nature stole my heart. 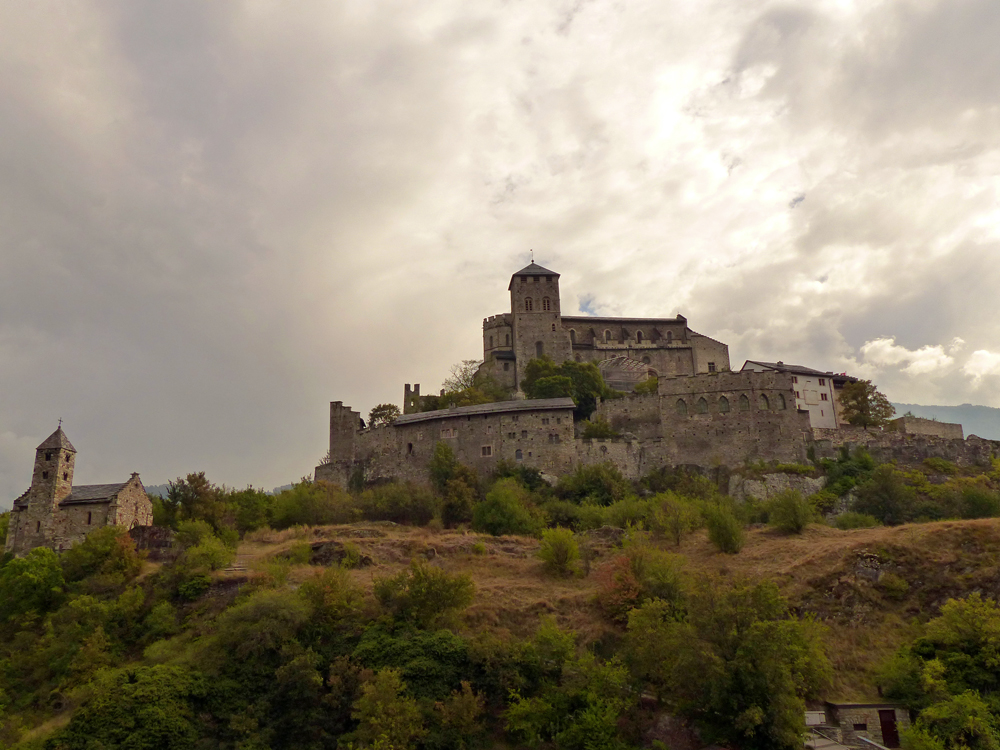 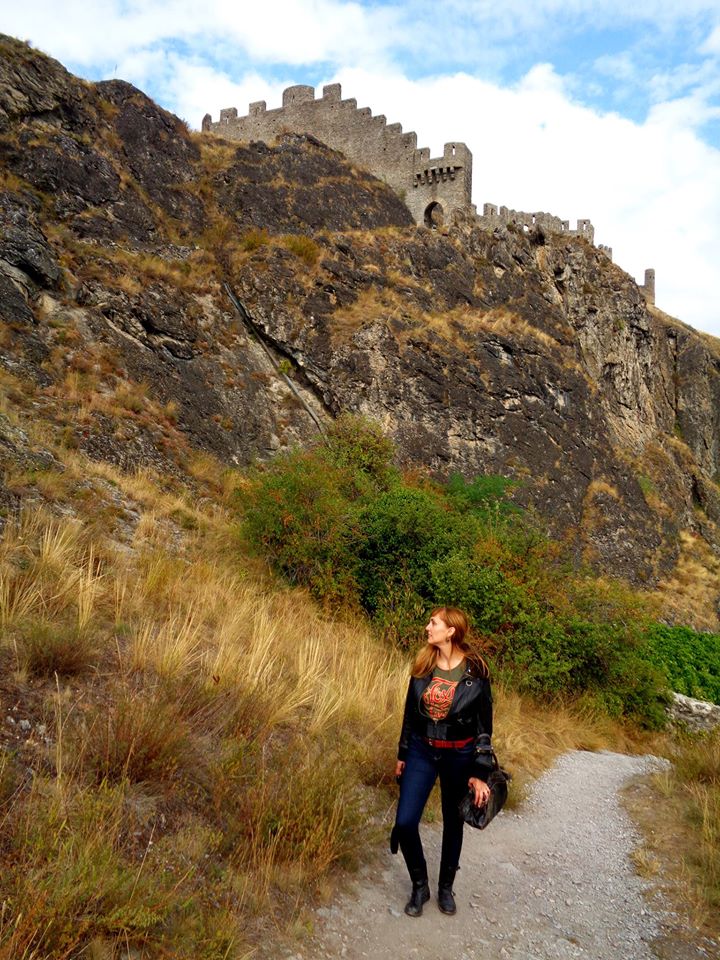 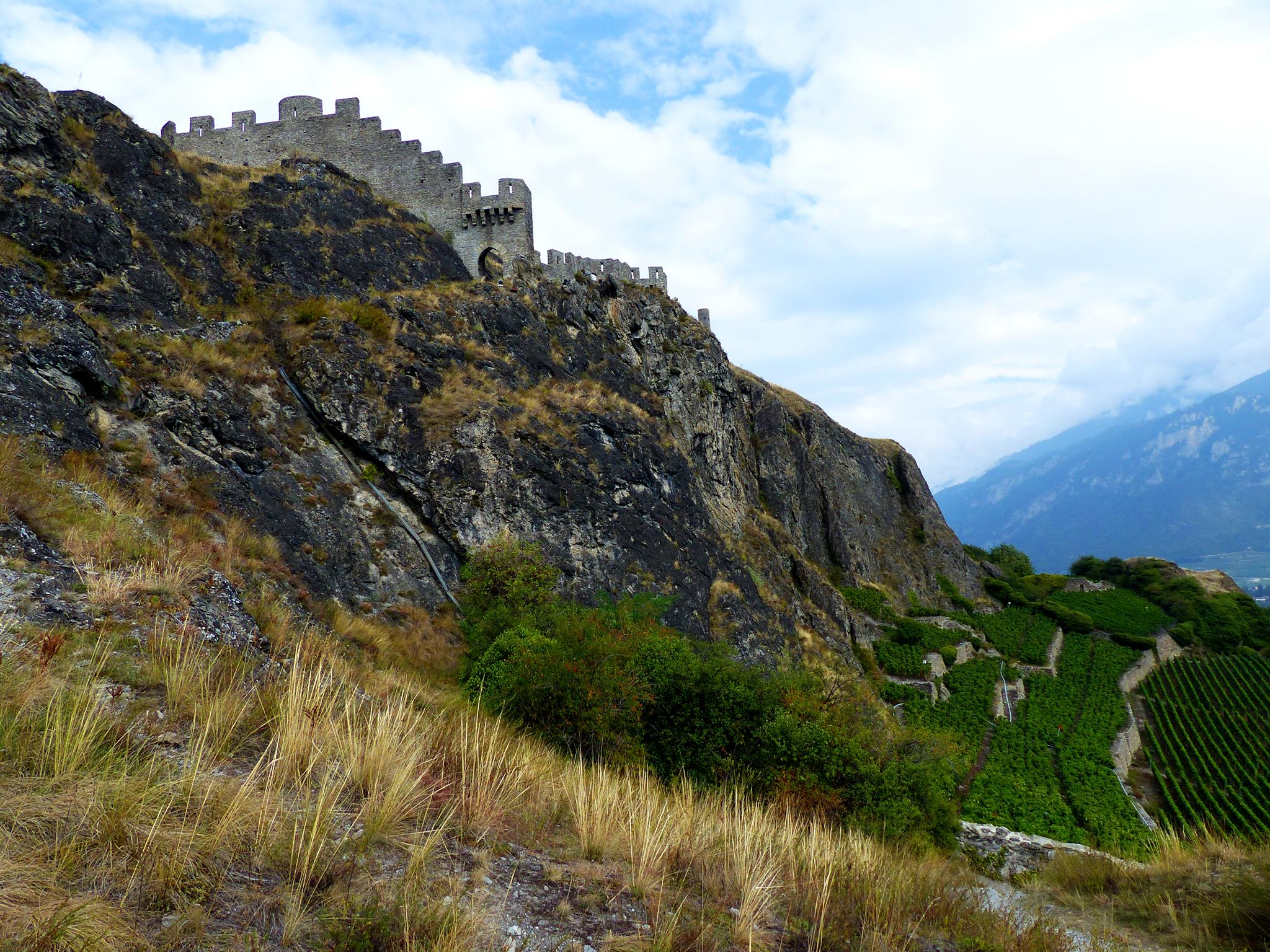 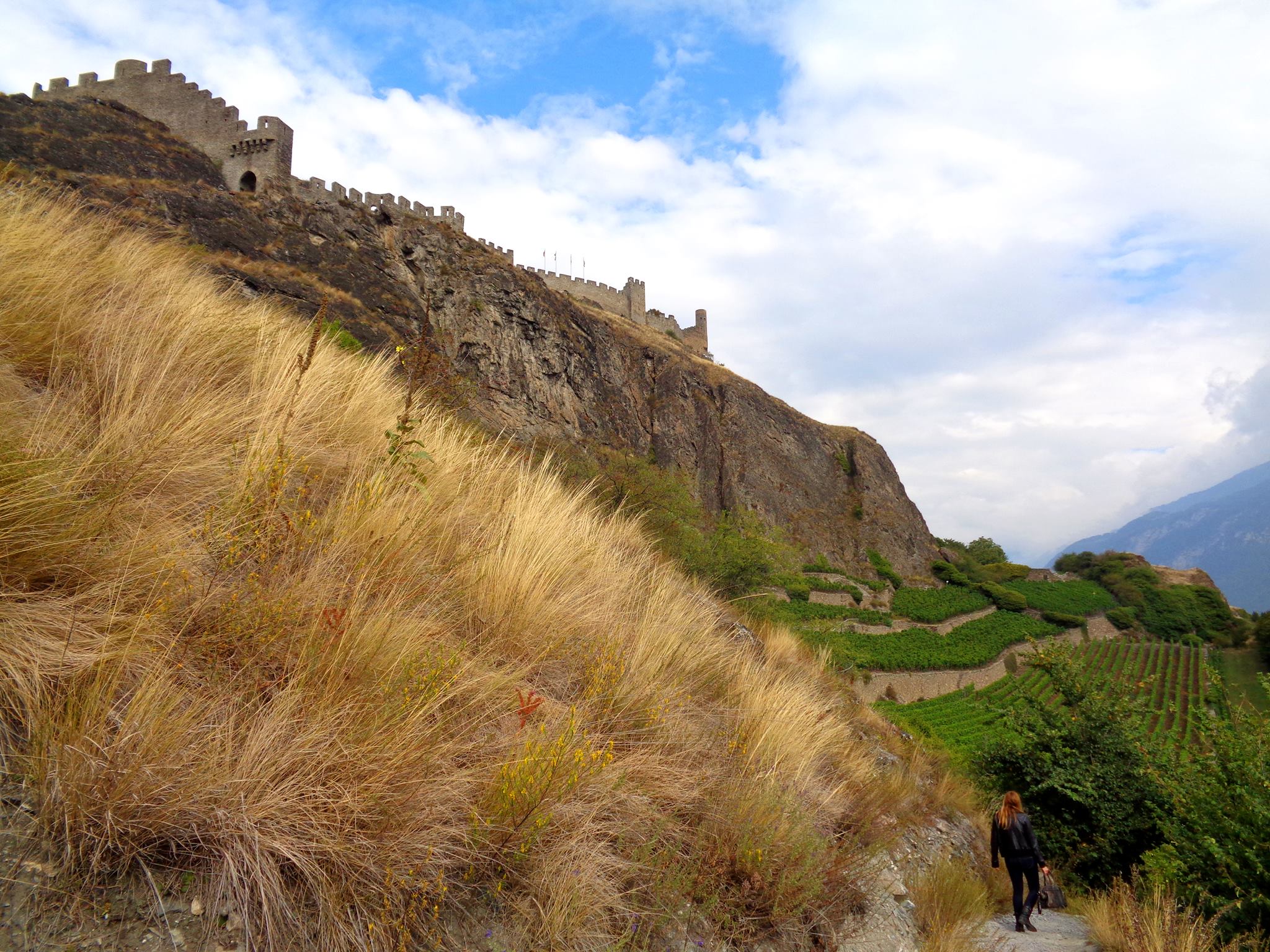 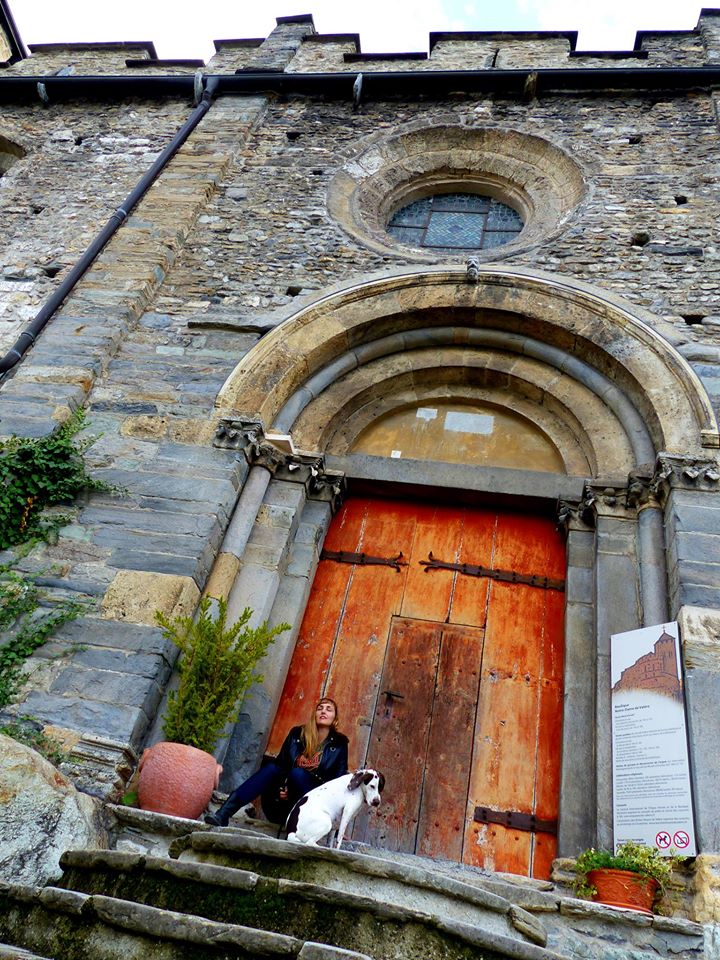 One of my favorite cities to visit in Belgium is Bruges. It is sooo full of history, that a visit turns into an experience at once. When we were walking through the medieval streets and alleys we bumped into the Minnewater castle. 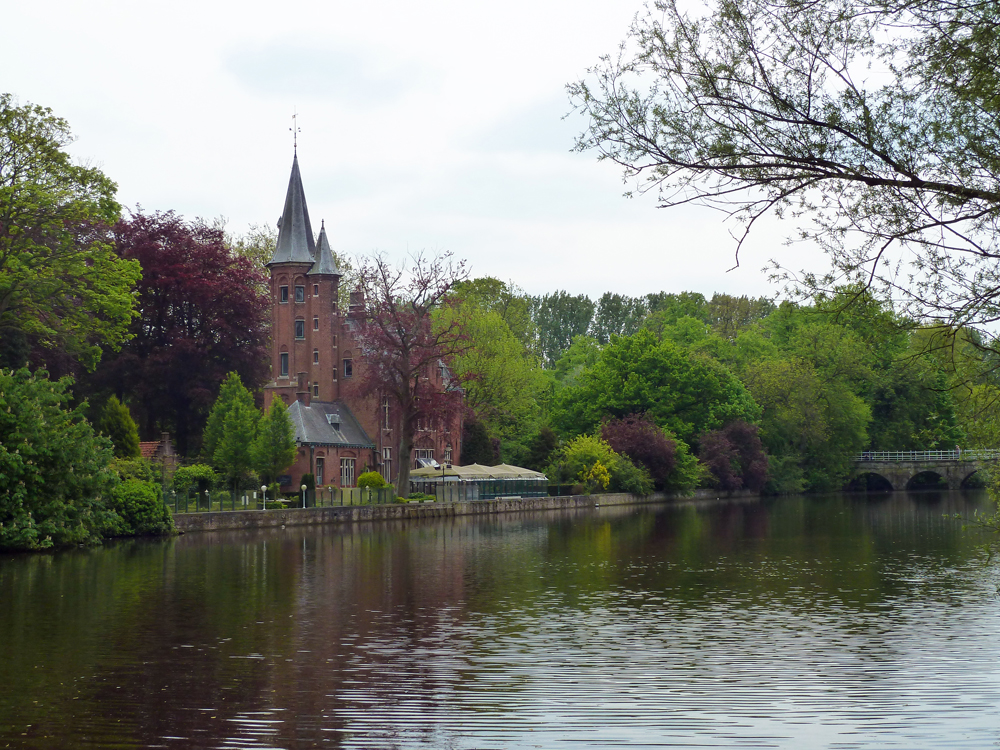 Haha, I just realized we never visit any Dutch castles and we also have quite a few... I'll post some more photos from France and Germany later. Great subject! Come on peeps, let's share!!! Since we can't travel with the Corona virus it is extra fun to digi-travel

Konrad, what a great guided tour. Loving the gruesome details!

My Mum's Mum worked at Leeds Castle as a Nanny during the early days of WW2. The majority of the ground floor have ebony planks as flooring, it's a fantastic place.

In Switserland we have visited the Rhone Valley. There are two castles located on the top of two hills, right next to eachother in the city of Sion. I believe the castle we visited is one of the oldest castles that is still standing. You can actually feel the vibe. The castles date from the year 999 and 1300. One of the castles still has a church which was breathtaking. I truly hope to visit Switserland again in the future. The nature stole my heart.