Back in the day...way back in the day...anyone who saw Gene Vincent and the Blue Caps live on stage said that Gene was the most electrifying performer they’d ever seen. Today’s the 47th anniversary of his death so I figured The Cat Man was worthy of inclusion in this thread.

...and it’s hard to top Col. J.D. Wilkes of the Legendary Shack Shakers as a frontman

Another great frontman is Jake Calypso. Pretty much unknown outside of Rockabilly circles but seeing Jake and his band live is quite the experience. I saw him at VLV this year and he had the crowd transfixed and eating out of his hand.

Wayne Cochran should also get mention in this thread.

I have to go with Freddy Mercury.

JAGGER. i am not a Stones fan but i cant believe all of you to a man n woman could think of anyone else.

Tina rules. I saw her just a few years back on her last tour, and she still had the moves.

I agree with your aforementioned... and I'll add a few more of the gal's who've kick my ass throughout the years:

The best I have ever seen was Guy Picciotto.

James Brown. Please Please Please. If this doesn’t get you going, nothin will. Link. BTW - is this where Keef learned to hold a guitar?

In the beginning there was Bill Haley.... Also Fats Domino.

Jon Spencer!
And of course Joe Strummer and Lux Interior too!
And I like Nick45s mention of Shane MacGowan! Amazing frontman in the earlier years of the Pogues.

Sir Paul certainly knows how to work a crowd.

Robin Zander. The suit. The hair. The pipes.

Phil Collins over Mick Jagger, James Brown or David Lee Roth? Now that made me laugh.

Tom Waits was one of the most entertaining I’ve seen.. Does he qualify as a front man?

I thought Howlin' Wolf too, Doug. We have to give a nod to Jackie Wilson and Michael Jackson, in that respect.

I love to shock, but sometimes predictable is necessary: 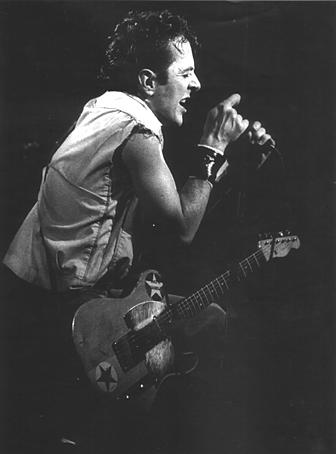