Is this the Jim Sullivan who was Jimmy Page's session player compatriot? This thread continues to be the best.

I peeked into the stall and did see an old lady, maybe it was the original Gypsy Rose Lee. Don't want to sound gib, but it's not a good recommendation for a fortune teller 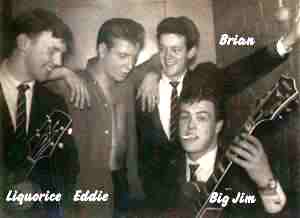 Yes lx, the very same Jim Sullivan. The Wildcats backed Gene and Eddie this week again and for the bulk of next week. Road manager Hal Carter was taken off the tour after this week and was replaced by Patrick Thompkins.

Dean Webb looked the part. He really did. His singing might be a bit rough, but the guitar work is super smooth on this track from 1959-

Noggsly- happily the short trousers are cropped from the shot.. 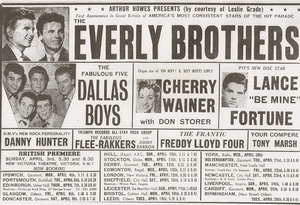 Here's the Everly Brothers with The Crickets playing Cathy's Clown-

And look who else is on the tour- Cherry Wainer and Don Storer who had backed Gene and Eddie on the Boy Meets Girls TV appearances. 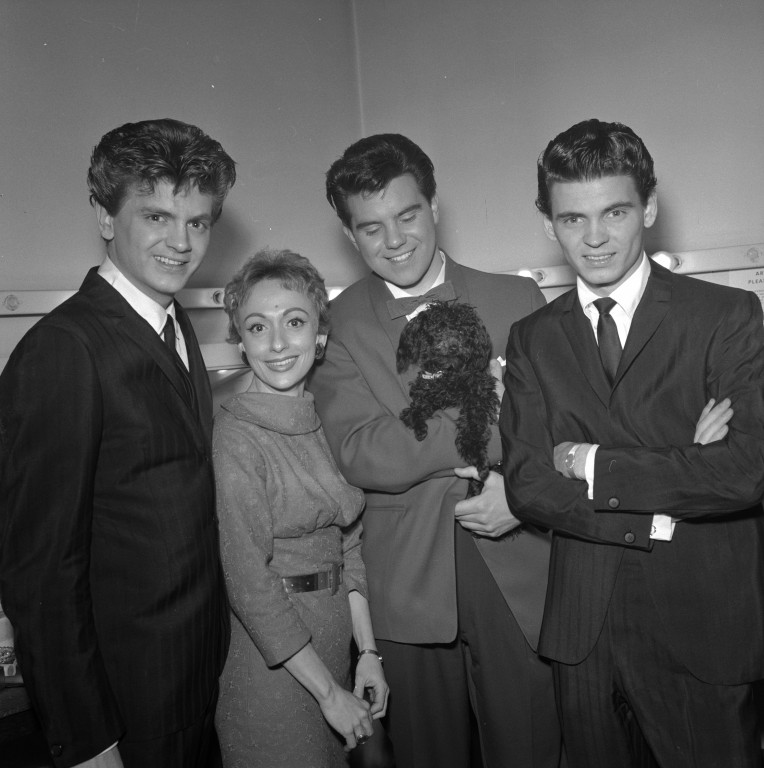 Is that Lance Fortune holding the dog?

I love how Cherry used to perform with a dog sat on the organ bench, you don’t get that with Jimmy Smith!

That is an excellent spot. I've been trying to place the face. I'll revise the previous post with the new information.

Sharon Sheeley flew in from America and arrived in time for her 20th birthday on April 4th and would stay until the conclusion of the tour.

Also in town this week was Duane Eddy. He had been in the country since March 16th, touring with Bobby Darin, Clyde McPhatter and Emile Ford. 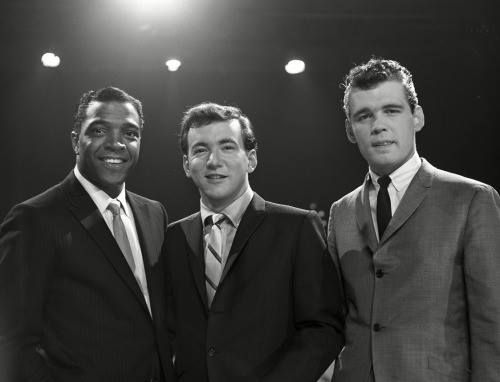 The poster from the Duane Eddy, Clyde McPhatter and Emile Ford show on April 10th, Guildford. No Bobby Darin on this night. Duane would take over at the Finsbury Park Empire for a week, starting on April 11th on a package he headlined with Alma Cogan, Des O'Connor and Frank Ifield.

A bit of extra Soho trivia - the site of Le Condor Club (17 Wardour Street) is the site of Pinoli's restaurant. It was here on July 1st 1905 that 23 magicians formed The Magic Circle.

The line-up for this week matches that of Finsbury Park- Tony Sheridan, Peter Wynne and Eddie Cochran in Act I; Dean Webb, Georgie Fame and Gene Vincent in Act II. The Wildcats providing backing, Billy Raymond was compere.

The theatre is still in use today.

Wow, it looks like there's 7 bands playing that might on Bristol including Eddie. Anyone know how long the sets would have been for the headline acts in those days?

Good question Vince. For the big marquees like Bristol where there hardly seems enough room on the playbill for all the names, Billy Raymond would do the introductions and perhaps sing a song. The support acts would do 10-15 minutes and the headliners about 20-25 minutes. Cochran generally closed the first act, Vincent the second- however, there were a number of shows where these positions were reversed. There would be an all-cast encore, a quick break to turn the house around and the the entire two hour show would be repeated.

The earlier one-night shows had a slightly different format with Billy Raymond doing introductions and a bit of gee-up before Cochran's set, then Vince Eager would close the first act. Second act would be Billy again, then Vincent, then the encore.

Lodgings for the Bristol week were at the Royal Hotel.

Thursday April 14th was the final performance with the Wildcats.

To compound the problem, Dean Webb had fallen ill and he too was replaced by yet another of Parnes' bottomless pocket full of dreamboys, Johnny Gentle.

Friday April 15th There would be no performances today as the Hippodrome was closed for Good Friday.

Replacing the unwell Dean Webb, Johnny Gentle was a singer from Liverpool.

Saturday April 16th Tour manager Patrick Thompkins produced the flight tickets and gave them to the American stars. After tonight's shows they intended to travel back to London and catch the 1pm flight from Heathrow to have a ten-day break before returning to resume touring in the UK through the spring and into summer.

The Stage Door and loading dock for the Hippodrome theatre is on Denmark St.

Thank you Ade, it was incredibly interesting to spend the time analysing what might have happened.

Looking at the pics of the car again I hadn’t noticed that the boot/trunk lid has been caught by the deforming rear left wing. ie. Car hits lamppost, force acts from left on rear of car, latch releases the boot lid as load sill concertinas and moves the latch plate inwards/right. As bootlid is opening it is trapped by the left wing moving across, allowing the rear left light cluster to end up underneath it. All of that also seems to support the car hitting the lamppost in a sideways/arcing motion.

Incredible thread, thank you very much, ade and noggsly. Biiig thumbs up!

What a great thread, thank you so much for taking the time to post this. Lots of great pics and clips I haven't seen before. I admit I haven't read all of it yet but I will soon.