It's in the title. Why is it? Would that make a mismatch in output volume? Is there a Filtertron version that would suit a Dynasonic in the neck? (HS Filtertron, TV Classic, Classic+, Powertron, PT+, pre-FMIC Ceramic FT etc.)

I know our own Paul Pigat originally had it in his Synchro Club but he changed pickups since. In theory it makes for a lovely combo. The gorgeous warm but twangy cleans in the neck and more growl and mids in the bridge position. Must be a reason we never saw it on a factory model and I can't remember seeing the mod being popular.

PRS aped that very layout for the Vela.

Lots of makers have used P90s and hum buckers too, like Proteus' favorite marque: 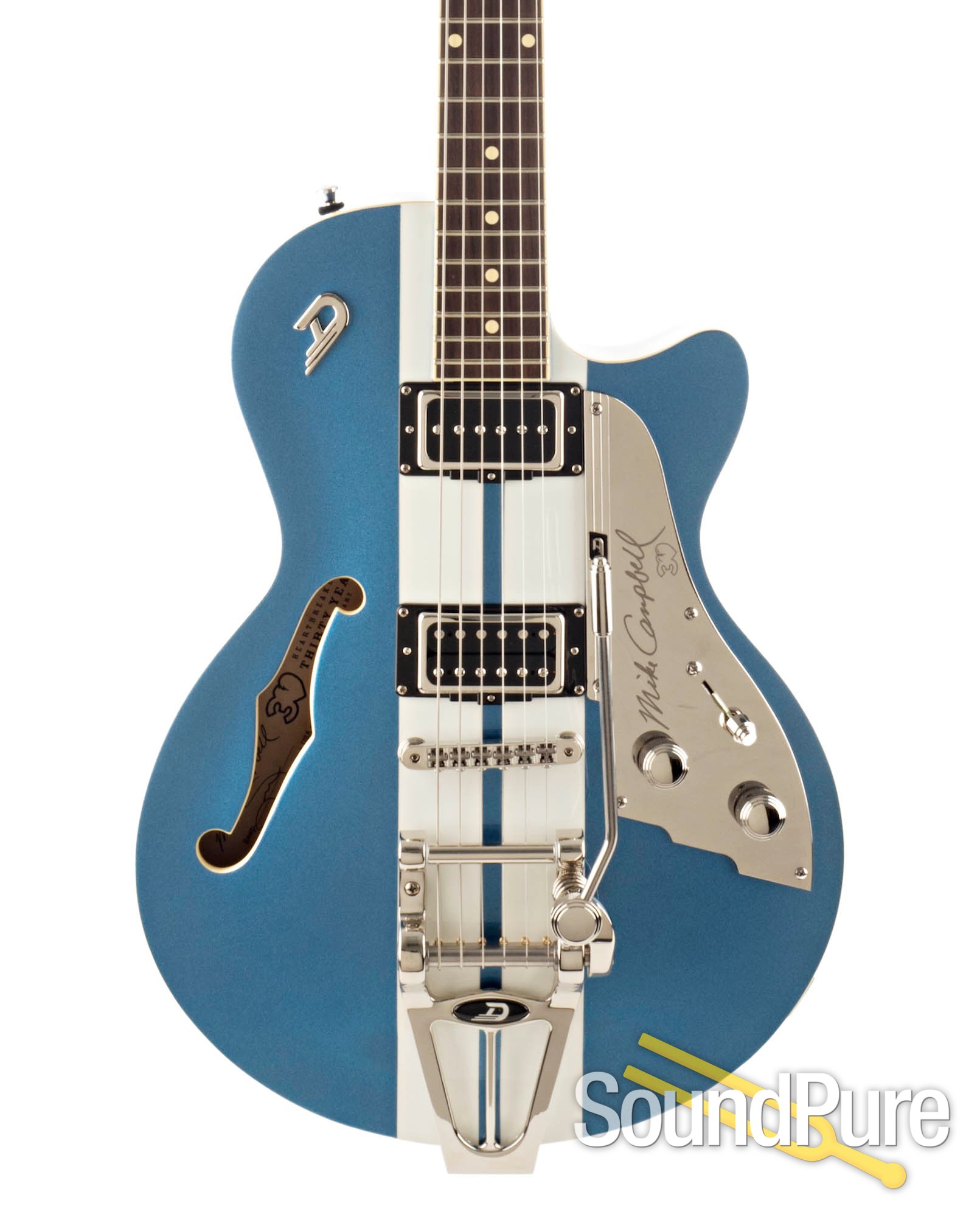 I agree, why isn't that an option?

I keep thinking about putting a TV Jones Classic Plus or Power'Tron into the bridge of my Duo Jet but then when I play it I enjoy what I hear so I don't want to mess with it. I do prefer a bridge humbucker and a single coil with alnico 5 slug magnets for the neck pickup. I hope Paul chimes in to tell us why he changed his.

My guess would be that most players would (a) never think to do this and (b) like matching pickups. And for myself, I love the sound of a Dynasonic but they just don't suit what I end up playing. They sure do sound beautiful.

In my 6118T conversion I put a Dearmond 2000 (Fender designed) in the neck and the original 1960 Filter'tron in the bridge position. It didn't work out for me and I just put in a set of TV Jones HTs that I've had for a while. The vintage Filter'tron was too mellow compared to the Dearmond and I just couldn't make it work. The Filter'tron in the neck and the Dearmond in the bridge might have been a better configuration, but now that the HTs are in there and all set up, I'm happy with the sound; nice single coil clarity, bite when needed, good balance, and no harshness.

I put a T-Armond/TV Classic Plus combo in my over-the-top modded 5420t. It’s awesome! It took a LOT of experimenting with height adjustment to balance them, but it was worth the PITA. I often wonder why more people don’t do this.

Thanks so far, guys. Seems - besides sonical taste - it's a matter of balancing the pickups out. I understand that it takes some time and patience until you end up with a usable solution. Thing is: To me it sounds like in the end it will still be a compromise since one of the pickups will not be perfectly adjusted by itself and I don't think I would want this. For me (!) I can't see a reason why setting up a Dyna very low just to set the balance related to the Filtertron in the bridge. I'd also be happy to see what Paul (and others) say.

P.S. By looking at drmilktruck's pics posted in #2 the Duesenberg suddenly doesn't look tooooo bad... at least compared to that PRS. :)

A vintage spec DeArmond in the neck position of a hollowbody would overpower a Filtertron in the bridge position.

I don't think they combine that nicely sound-wise, but that's entirely a matter of taste, I'm not a very big Filtertron fan.

A P90 bridge/DeArmond neck would make more sense to me - they're both single coil, you'd get the bridge position beef and growl from the P90 that a DeArmond doesn't have, and they'd be a better match balance/output wise.

I'll be able to report on that pretty soon : a friend of mine is winding a P90 on a cut-down P90 bobbin for me that we've been able to fit in a tall bridge position DeArmond shell., and I'm going to try that out in the bridge position of my old Starfire III along with the original neck DeArmond pickup.

A vintage spec DeArmond in the neck position of a hollowbody would overpower a Filtertron in the bridge position.

I don't think they combine that nicely sound-wise, but that's entirely a matter of taste, I'm not a very big Filtertron fan.

A P90 bridge/DeArmond neck would make more sense to me - they're both single coil, you'd get the bridge position beef and growl from the P90 that a DeArmond doesn't have, and they'd be a better match balance/output wise.

I'll be able to report on that pretty soon : a friend of mine is winding a P90 on a cut-down P90 bobbin for me that we've been able to fit in a tall bridge position DeArmond shell., and I'm going to try that out in the bridge position of my old Starfire III along with the original neck DeArmond pickup.

Thanks a lot, Walter! That's very valuable info for me. I think I won't tinker with a FT equipped Gretsch but will rather buy a Dyna guitar one day (again).

Btw, have you received my email from around a week ago? I used an older hotmail-address I still had.

I think because people that like Dynasonics tend to like them a lot, and Filtertron fans dont have the time or the patience for Dynasonics. I had that combo in my Penguin for awhile and I NEVER used the Dynasonic.

I had a Classic in the neck and Classic+ in the bridge for a brief while and found the sound too dark. Then I swapped the Classic+ out for a Magnatron and was much happier, much twangier. I eventually sold that 6120 and went back to all Dynasonics. But I've been getting a real itch to play with a P90. You do end up making a compromise, but chasing your tone is half the fun.

seems like there's an obvious answer, which is that unless you're a guitar boffin it's rather tricky to swap them out as the footprints and mounting depth/height are not the same. you're going to have to do some kind of drilling/filling or fabrication to put a Dyna over/in a Filter route. and who wants to do that to their $2500+ pro-line Gretsch?

Also, while aesthetics aren't everything, the two pickups just don't look that good together, at least in their native forms. A T-Armond in FilterTron housing would be an obvious solution.

I almost always like a brighter/single-coil tone at the neck, and something a bit warmer and thicker at the bridge, so this concept appeals to me. I have several guitars so equipped, though none use an actual Dynasonic at the neck. The two closest are probably my early Electro ProJet, with a superb GFS Surf 90 at the neck and the original mini-bucker at the bridge (a combo I always enjoy) - and my Anni Jr, with a MagnaTron at the neck and Classic+ at the bridge. It's a perfect combo as well. If you're really after Dyna-at-the-neck on a Filter'Tron guitar, the Magna is well worth a try. It fits the form factor and definitely has a bright, fat single-coil aspect (though it's not dead-on Dyna). FWIW, I strongly recommend the Magna'Tron in its own right.

But fundamentally, my ear really wants to hear either Dynasonics or P90s most of the time. I play lots of guitars solo, playing around in the studioffice, and enjoy all the tones and textures. But when I hook up live with other players, or start to record - despite the fact that I love the texture and subtleties of Filter'Trons - I rarely get what I want from any kind of double-coil. So it's back to Dynas or P90s.

And I'd like to say that Dyna-at-the-bridge is not my favorite bridge tone. Played by itself, it can seem brittle and harsh. But in a combo context, there it is in all its glory. AND, most crucially, there's nothing like the middle position with two Dynas. That's pure magic. Combining a Dyna with anything else compromises that voodoo.

I'm with WB in liking the idea of Dyna neck and P90 bridge; it would all depend on how that combination works in the middle position.

As for the off-brand guitars pictured above, I much prefer the PRS. The body design is attractive to me (though the color is a woeful miss) - and it needs a whamelo. The Dieterberg is beneath comment. Well, one comment: I find both their single-coil and double-coil pups amazingly generic and undistinguished.

Reverend also pairs a single at the neck with a double at the bridge on several models - and their pickups have much more character.

But not as much as Dynasonics.

Yes, the middle position on a double Dyna configuration is another reason I still have a bridge Dynasonic. Also, when I flipped my pickups 180 degrees it added a bit of beef in the bridge which makes it way more useful to me.

Because a Dynasonic neck/ P90 bridge works so much better.

The closest combo I have is the opposite of the topic; a Streamliner Jr with a Supertron neck and T90 bridge. I like it and people who have heard also it like it.

How about a G2420T-P90 Limited Edition Streamliner? Maybe not quite what you want, but close and you could update the pickups with TVJs.

Thank you for your comments and suggestions. Similar pickups, similar guitars, inexpensive modding platforms etc. - that's a lot of compromises and I followed that way too long. The only alternative I can think of is one of the DA2000 equipped Electromatics and try a Filtertron there. Had one with vintage DeArmonds in it and liked it. Miss that lovely neck pickup sound. Not that I needed another guitar, though.

Sascha, didn't get a message from you - or it went to a recently emptied spam box...try sending me a PM maybe?

Sascha, didn't get a message from you - or it went to a recently emptied spam box...try sending me a PM maybe?

Tried to send you a PM. Let's see if it goes through. The copy to myself didn't work. (Never did even if the PM worked.)