Hey there, I have a few guitars with P 90's. I love that sound, but I am wondering if folks with knowledge of alternatives that fit into that route could weigh in. A lot of pick up makers are designing pick ups that would fit. Ones I'm aware of are dynasonics, Gibson staple pick ups, some people make Charlie Christian style P 90's, and I think there are even humbuckers made for P 90 routes. At this point I am most intrigued by the staple and the dynasonics, but I 'm wondering if they are that much different from the P 90 sound. I'd love to hear any thoughts including specific brands. Thanks in advance!

Though I don't have a guitar with Dynasonic pickups, I've read overwhelming positive reviews, from countless GDP members, on the virtues of Dynasonic's (especially in a Gretsch guitar), and I have watched/listened to many video presentations using the Dynasonic pickups, and I really like the sound! There are obvious differences, others will undoubtedly chime in, who can give you a description of the differences between the two, not actually having a Dyna equipt guitar, I can't A/B them for you.

I have guitars with both vintage and modern P90s and Dynasonics, and one with a Seymour Duncan staple. I love the midrangey heft of P90s but have more recently fallen under the spell of Dynasonics. They have more clarity and both more top and bottom end that P90s as a general rule. Neck Dynas don't sound dull and muddy like some pickups and bridge Dynas really have a bite...almost tele like but with more meat. When I got some I realised they were MY pickup!

The staple pickup is really great too...similar to a Dynasonic but with more of a Gibson flavour. Again it's more top and bottomy and less prominent on the midrange...sort of more hi-fidelity...and again great in the neck position. I have no experience with them in the bridge or middle position however.

I'm not sure you can compare unless they are all in the same guitar. The dynasonics in my 6120DE sound nothing like a p90 Les Paul.

The T90, which is really a marriage of P90 and the scooped tone of a Filter or 'Armond, have good midrange, but more clarity than Gibson P90s. 250k Pots get a little closer to Gibsons. But they are never quite the same, there is always a little Gretsch character in them.

And the Filters are of course all over the map. However, The Rio Grande BBQ'Trons, which I currently have in the guitar, have ALOT of mids... more than anything TVJ winds. They are closer to Gibson P90 in character than anything else mentioned. They are like a PAF and a Filtertron having a baby LOL.

A Gibson-style minihumbucker will drop into a P90 soapbar space using a standard adapter ring -- easy to find on eBay or from guitar parts suppliers. My partscaster T-type has a Wilkinson minihumbucker and adapter ring that fits nicely into the original soapbar P90 cutout in the pickguard.

A Dynasonic will be much clearer and brighter than a P-90. They really sound nothing alike at all.

You owe it to yourself to have a dynasonic guitar.

Are gold foils about the same size? There are at least a couple being made to fit, Lollar, Mojo.

the jazzmaster pickup..similar bobbin size as p-90 but uses real alnico magnets for pole pieces, not the screw slugs and bar magnets a p-90 uses

gibson alnico v staple...gibson wanted a pickup to rival the dynasonic, so seth lover designed a different housed but similar interior pickup...the staple has moveable magnet polepieces and elevator system like the dynas

g&l mfd- later leo fender design for g&l guitars...sort of an in between of his earlier designed jazzmaster and jaguar pickups...

yes sir, I do believe you are correct. I'm debating how to make that happen. Either putting dynasonics in one of my currently P 90 loaded guitars, or do I buy a guitar built with Dynasonics already in it (Most likely Duo Jet or 6120). Not sure yet, but I did realize I have a coupe P 90 guitars. One is a 50's Guild Aristocrat that someone replaced the Frantz pick ups with Seymour Duncan P 90's. Sounds really cool, just wondering if that might be a good one to switch the pick ups out since pretty much all the hardware has been changed.

yes sir, I do believe you are correct. I'm debating how to make that happen. Either putting dynasonics in one of my currently P 90 loaded guitars, or do I buy a guitar built with Dynasonics already in it (Most likely Duo Jet or 6120). Not sure yet, but I did realize I have a coupe P 90 guitars. One is a 50's Guild Aristocrat that someone replaced the Frantz pick ups with Seymour Duncan P 90's. Sounds really cool, just wondering if that might be a good one to switch the pick ups out since pretty much all the hardware has been changed.

That sounds like a cool candidate for some Dynas!

They make dynasonics that are P 90 sized. A classic dynasonic would not fit that route I'm pretty sure.

Not a can of worms, but an onion or a Russian nesting doll. Modern Dynas, old ones, Duncans, T-Armonds, staples... many thousands of words could be written on the subject, and even if they were penned by patient, prolix, and research-oriented Proteus, they would probably prove inadequate to the task.

That said, TV Jones T-Armonds in "soapbar mount" fit the P-90 footprint while fully embracing the difference between P-90s and vintage Dynasonics, even to the point of exaggerating it. I suggest you begin your exploratory journey there. I find them very satisfactory; if they stray too far from-90 territory for your tastes, try the Duncan Dynas.

I think there is a very slight difference between a P90 soapbar rout and the DeArmond footprint with the DeArmond being slightly larger. At least putting a DeArmond 2000 into a 5135 rout was touchy while a soapbar fit right in like it belonged there. Some got the DeArmond in without modification while others filed a touch off the DeArmond shell or routed just a bit from the body. Wouldn't take much. I think someone has schematics of one overlaying the other.

While I have played a few Dearmond and T-armond equipped guitars and been wowed by some of the sounds I have found that they are not the pickup for me. A Gretsch Dyna in a Round-up sounded incredible in the neck position - pure Duane and just a sublime sound. But I don't use that sound very often.

A few years back I built a parts-Tele routed for P90s. I thought a P90 Tele would be cool and it was. But when I put TV Jones P90-sized Filter'tron classics in it the guitar sprang into life - It LOVED those pickups. Clean or dirty it sounded incredible. Twang, bite, fat sounding dirt - it was all there. So they would be my recommendation.

These are all great ideas. Now I need to do some research, thanks!

Trying to read between the lines, would you suggest a jet with dynasonics? 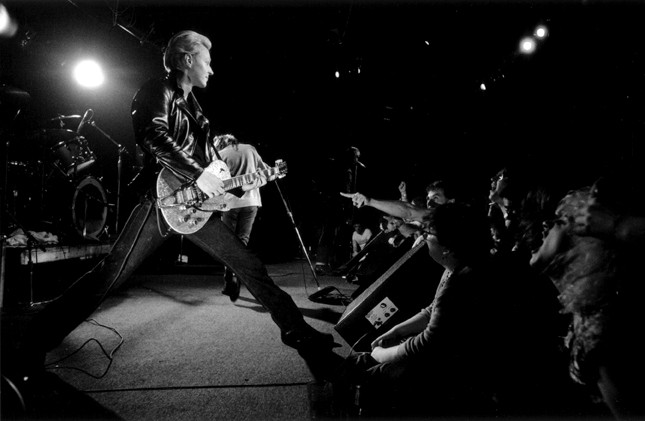 Billy knows what he likes!