...but the revulsion was intense, visceral, and immediate. - Proteus

My Casino had flats on it when I bought it used. I felt exactly the same way and many players love flats on the Casino. I was hoping to hear the jangly round tones that lead me to a Casino in the first place and flats produced the exact opposite.

The upgrade choice is easy: TV Jones T-Armonds and done.

when you and Rust the Younger did the TV vs. Duncan Dynas video i liked the Duncans quite a bit better. but that's just me. i think it would be beneficial for anyone really interested in aftermarket Dynas to see that video.

the only time i ever tried flats was on my erst-Wildkat and they were a big nope. too much bass, too much thunk.

Getting the pickup body up closer is a huge deal, I hated Dynas on a 6120 until I got my shim game going. 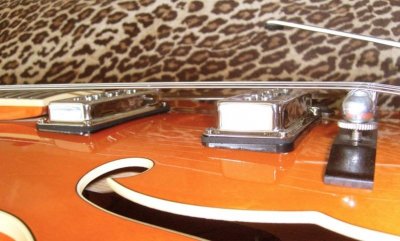 Deke, sorry what does that mean? I probably am not the only one who doesn't know. Thanks.

Strings matter in this equation also. Please nothing lighter than 10s, and ideally 11s or heavier.

That said, while the stock Dynas work for me on full hollowbody guitars, they haven’t satisfied on the Jet. The upgrade choice is easy: TV Jones T-Armonds and done.

I can't imagine playing less than 10s on anything.

An exciting pickup upgrade option has been offered to me which I'm going to go for. They'll take a while to come through though so a bit of tweaking in the meantime.

To be honest, my comment is more relevant to the post about flipping the pups around, sorry for the confusion.

50’s Dyna Gretsches had stacked tone pots (I’ve read it was only a transitory thing in ‘56, but my ‘58 Clipper had them also so who knows). I think they are wired opposingly, so as you turn one down you're turning the other up. I think of it like trying to squish a balloon into a box with a flat plank - as you push down one side the other side pops up like a see-saw.

Wired this way you don't ever get the FULL response out of the pups as you're always rolling something off, but as has already been mentioned, the neck pup can be kinda woolly and the bridge pup kinda spiky (as an aside, I wired my '53 Scripty with a conventional tone pot - which I never used - and the output on that guitar was HOT!!!).

With this kind of wiring you have much more control of the extremes of the pups than a standard treble-roll-off tone pot. It allows you to go from hyper-woolly bass thump one end to frozen icepicky treble at the other with everything in between. My preference is to run the tone pot slightly north of halfway, about 5.5 if you will. You really get that Gallupy bell-like chime out of it.

I’d love to see this reintroduced on Dyna Gretsches, there’d be no need to flip pups around then .