Contemplating loopers for accompaniment. I've had a Dito, and I liked it as a practice tool, but I question its utility as a performance aid. I'm wanting something simple to engage and disengage on the fly, but also have the capacity to store some prerecorded loops. That said, I want to avoid the super-feature-laden and one you need a degree as a programmer to use. Where is the middle ground?

When you say pre-recorded: Do you mean loops you played or something like a backing track?

The EHX Nano 360 is a simple device with 11 slots for your recorded loops. https://www.ehx.com/product... 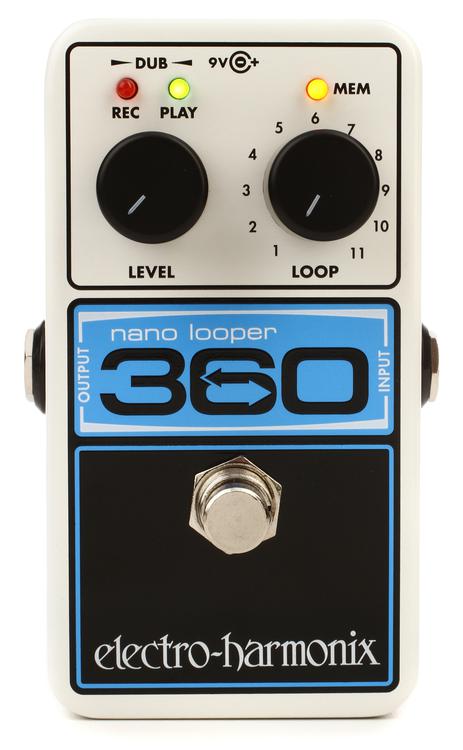 If you'd like to put some backing tracks in it I'd look around for something like the Digitech JamMan Solo XT. It's single pedal, has both Stereo and USB for im- and exporting files and still is simple enough, I think. It may be discontinued but easily to be found used. 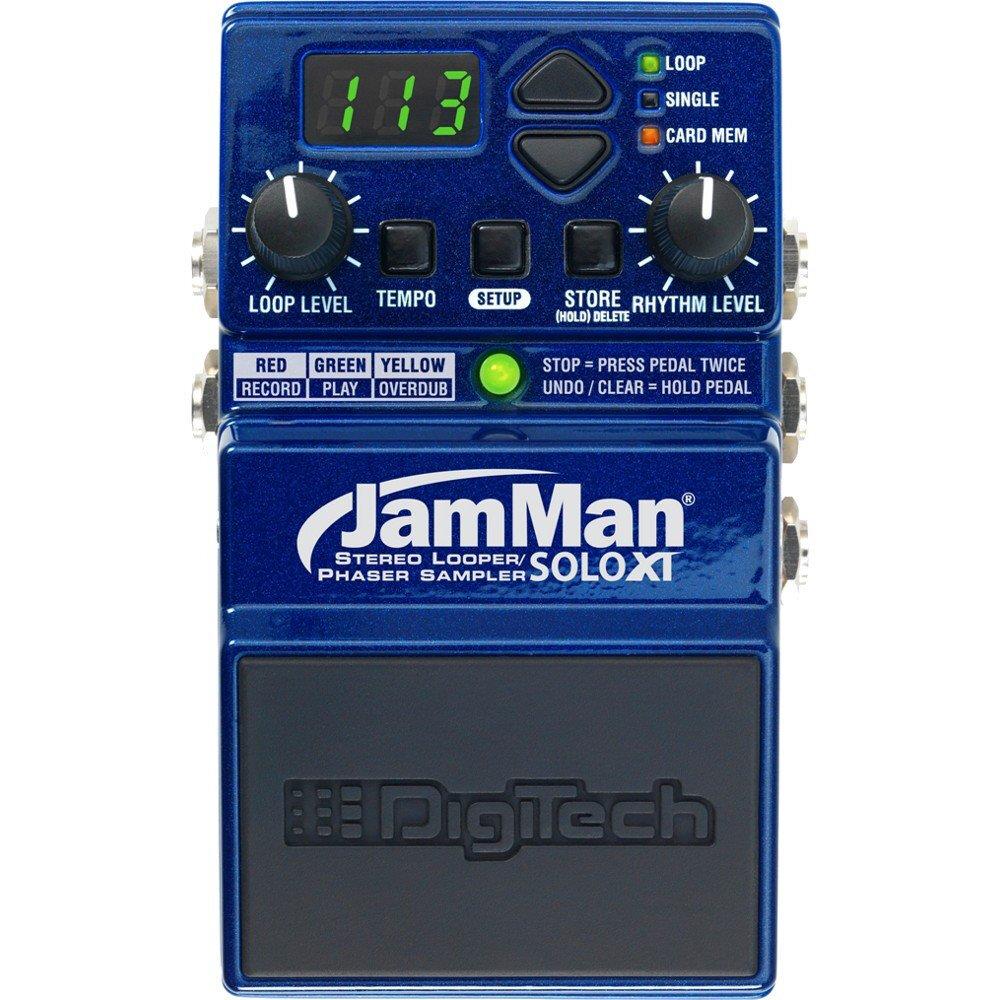 When you say pre-recorded: Do you mean loops you played or something like a backing track?

The EHX Nano 360 is a simple device with 11 slots for your recorded loops. https://www.ehx.com/product...

If you'd like to put some backing tracks in it I'd look around for something like the Digitech JamMan Solo XT. It's single pedal, has both Stereo and USB for im- and exporting files and still is simple enough, I think. It may be discontinued but easily to be found used.

The jamman and the boss rc3 are probably the best "works as a simple effect but has more complicated features as well" option. Both have software storage of pre-recorded loops and are capable of being accessed on the fly by foot instead of having to change a dial setting. Both support outboard foot pedals to increase their live usability. Both should run you somewhere around a hundred bucks used if you are diligent

I second the Boss RC-3! It has a three hour recording capability, and 99 recording slots. They also have a large selection of drum rhythms to play along with, it's a well thought out pedal.

I use the Boss FS-7 Dual Latching foot switch, to make things easier, by eliminating the need to double tap certain functions. It's not terribly expensive, it's around $200 new, and considerably less used. If you decide to go with the FS-7 as well, it will set you back about $60 for a new one, and about half that used.

I've had a lot of fun with mine, you can literally be a one man band. It's very similar to the Boss RC-10, but in a much smaller footprint.

I have the RC3 and three of the JamMan Solo XTs (which my sondrummer and I both use when playing together, taking advantage of the "JamSync" connection which keeps them in time and will auto-trigger recording passes, etc).

As one-pedal loopers with features, both are equally easy/hard to use - on a single-wide there's no option but to put a bunch of functions under the one button, requiring you to learn various tapdances for the necessary functions. I have a slight preference for the usability of the Boss, but that's probably because I've been a bigbossman (at least in looping) for 20 years, and I'm used to their interfaces. Both have plenty of storage slots for backing tracks; the Digitech is ultimately more expandable with its card slot.

And, yes, the usability of both is greatly eased with external switching - fewer functions under a given stomper means easier use. It also, critically, significantly increases the likelihood that you'll trigger the various functions you'll need (start/stop/playback/overdub/stop overdub/erase overdub/restore overdub, erase loop, etc) on time, in rhythm, and in sync. (Double-stomping a switch for a function is not conducive to timely transitions.) So if you go for one of those capable and compact units, go ahead and get the switch.

And in any case, reconcile yourself to going slow and spending time with the pedal, with the manual in front of you. You'll learn what it's capable of (that may not have been obvious from research), how to do it, and - arguably just as important - how to avoid and not unintentionally invoke functions you DON'T want. That will make it easy to stay away from features you don't need.

But. Once you've devoted the space to a space-saving single-wide pedal - plus its space-occupying auxiliary footswitch - it could be you'd just as well have gotten a double-wide pedal with two stompers. So while you're looking at the RC3 and SoloXT, look at their wider brethren, the RC-30 and JamMan Stereo. Also look for any previous generation double-wides in those lineages.

Depending on exactly how you want to perform with a looper - how much advance prep you'll do for backing tracks (or whether you'll record those on the fly), what additional features might enhance your performance - there are other loopers you should consider. Some do things you might not have thought of, but which would fit into your performance needs and be worth the trouble to learn.

High on that list to research should be the Boss RC-10R, which is optimized in multiple ways for one-man-band live performance, including hundreds of pro-sounding rhythm patterns assignable to 16 different drum kits, the ability to call multiple drum parts within a song, including intros, transitions, and endings - not to mention the ability to sequence sections of a song (verse/bridge/chorus, etc) to create an arrangement. Those things might be unnecessary complications - or they might turn out to be exactly what your situation warrants.

Boss also offers a series of "tabletop" loopers - RC-202 and RC-505 which are, again, optimized for one-man performances. They're probably not what you think you're looking for (if your model for looping is the Ditto), but could be what you really need.

In any case, whatever the device, be sure to get more internal (or card) memory capacity (and memory slots) than you think you'll need. Some of the specs seem ludicrous - hours of recording time and hundreds of memory slots - but if you go down the road of using pre-prepared backing tracks, it won't go to waste. For the same reason, get stereo - it will vastly enhance the realism and effectiveness of backing tracks.

And if you're doing the backing tracks, when evaluating pedals pay attention to how those tracks are managed - how you get them in and out of the pedal, how it interfaces with the computer to transfer .wav files, etc. I know those functions sound like complication - but you already know the dead-simple Ditto doesn't meet your needs. You are going to have to come to terms with more interface to get more functionality. These really are computers designed for audio recording, and that they come in little pedals is something of a miracle. Sometimes accepting their digital nature and working with them onscreen is easier in the long run than button-punching on the pedal.

Lastly, on Digitech SoloXT pricing...I bought my first at various times last year, and routinely found them for 75.00 - 100.00, a ridiculously good deal for that power. In the last few weeks, though, they've consistently been well over 100.00. If that ends up being your choice, and you see one near 100.00 (or less), jump on it.

Some great options to consider here, fellas, both in terms of price and functionality. Thank you for the 411!

At the bear minimum, I just need (or think I need) something to cover my rhythm when I come off to solo, so the integrity and presence of the song remains, rather than going from full rhythm to plinky single string or even double stop solo. So something easy to record and trigger on the fly (no double taps) or store pre-recorded parts is what I'm after.

Certainly drum machines, mutilple-layered backing tracks, backwards loops, and varispeed could be useful, but I'm not really looking to be a one-man-band per se . . . I'm just needing a little coverage/accompaniment.

Obviously, you cant make something simple do more; so I guess go big but use less (per Proteus) is the best idea? More research on the above-mentioned loopers is needed, but this certainly narrows my focus.

I have a looper but have not used it since I got the Digitech Trio Band Creator. I really like it fo r recording rhythm loops and then either adding additional guitar parts as additional rhythm or for playing my solos....or both.

Andy (now with Reverb and has his own page) in the youtube below is my favorite "gear demonstrator" and highlights Digitech Trio. I love the one in the video and is way more dynamic than the previous generation of it which what I have.

I have a looper but have not used it since I got the Digitech Trio Band Creator. I really like it fo r recording rhythm loops and then either adding additional guitar parts as additional rhythm or for playing my solos....or both.

Andy (now with Reverb and has his own page) in the youtube below is my favorite "gear demonstrator" and highlights Digitech Trio. I love the one in the video and is way more dynamic than the previous generation of it which what I have.

Cool! I'll add it to my research.

I got a boss loop station rc-2 on a trade. It's complicated, to me anyway, so I just re-do everything each time I use it. I really only use it to loop a chord progression if I want to learn a lead or something.

Apparently, the Trio now comes with a looper (trio+)

So far the electro-harmonix Nano Looper 360 is in the lead. Just about spot-on for features and price. The only drawback being mentioned in user reviews is that playback levels are a bit low. Can any 360 users confirm or deny this?

When using something like the boss rc3 (or any of the others mentioned above) can you switch back & forth between loops like a verse, chorus, and bridge? I've watched a few demo videos but havent seen that demonstrated.