It's no secret that I love blue guitars. (And I know I'm not the only one here.) It's my favorite (favourite for our UK and Canadian friends) color/colour and there are relatively few guitars available in blue, so there's a bit of exclusivity to them. Plus there's the whole Picasso Blue Period Old Guitarist painting, Wallace Stevens poem and Scott Chinery Blue Guitars. Today I was thinking of who plays blue guitars.

The only signature models I'm aware of are the Epiphone Casino Gary Clark Jr. Blak and Blu: 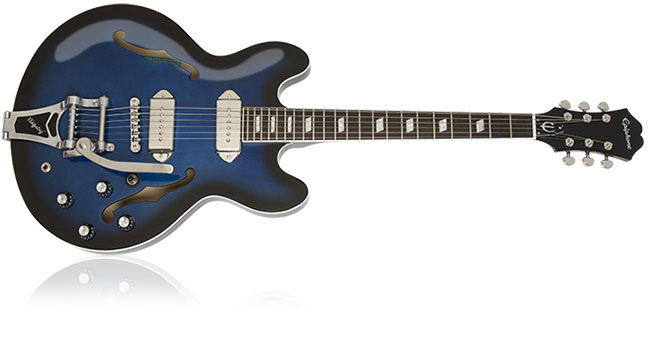 And the Dave Grohl Gibson ES-335 with the Trini Lopez headstock and diamond f-holes:

Anybody else play a blue guitar?

My acoustic is blue...Gibson LC-1 Cascade.

I've never been bold enough to go blue, but that Gary Clark Jr. Casino is beautiful. Not much of a fan of the Pelham Blue though.

Not a fan of blue guitars but I love that black and blue Epiphone.

I have a Lee Ranaldo Jazzmaster. It's a nice looking guitar.

Here's my refinned 1514 synchro Jet Pro. (It was originally cherryburst.)

Rotten picture, but I've got a blueburst Danelectro U2.

Several times I came real close to buying (sight unseen) an Epiphone ES-355 in what they call TV Pelham Blue. I'm glad I talked myself out of it, because when I finally played one it was not my cup of tea. They look cool, though.

I like blue guitars. I felt guilty when Buddy Guy sang (derisively) about somebody playing the blues on a blue guitar though.

I have a blue McCarty, a Catalina Blue Guild X160, and this one I just got a couple months ago:

I have a Lee Ranaldo Jazzmaster. It's a nice looking guitar.

I had the Thurston Moore green one for awhile. Love looks of the blue Ranaldo though.

I've had a Fender Modern Player Marauder in Lake Placid blue for some times.

Oh yeah I love 'em. My favorite blue guitar? The 6120BS. Real close second is a quilted maple blue LP. I don't own one but I do want one.

Here's my Dano Pro 56 on holiday in Cumbria. I changed the pickguard and added the side tape.

And as far as signatures go, there's our "gretsch amateur" friend's epi :

Ha ha, thank you. Is it because it's a guitar that it looks great despite it being blue originally?.... ; )

I have a Gretsch 5420T in Ice Blue Metal Flake:

and a turquoise Epiphone Casino:

I used to have a blue quilt Dillion DR-500, but sold it a couple of years ago when I was short on cash. Since I had two others in green and purple, and had got the blue one stupid cheap, I wasn't too upset about it.

Dime's was half blue