At times it has had, for testing. Aluminum sounds fabulous on it, works great with the buckers and centerblock. But I rarely play the guitar now, and the last Tru-Arc on it was needed for an order. I just haven’t replaced it. If it becomes a regular part of the rotation again, I’ll put aluminum back on.

Looks wise I've never been a big fan of the B11 and B12 units or the Chet arm...just visually prefer the solid looking B6 and B7s but thats just me.

I don’t remember Bigsby model numbers. My 335 has the short one, presumably intended for space-limited applications. (It was doing the backstroke in a box of old parts I found when working at the music store, and I liberated it.) I didn’t know better than to just try it.

Since in consequence the strings run further from the bridge to get to it, and by the topography of the guitar that’s a slight downhill run, there’s enough down-tension without an unsightly tension bar. The handle doesn’t come to the accustomed location, but it’s never been a problem. (If it had been, longer handles are available.)

Is it period-correct? Geez, I never thought about that. It’s properly functional, musically useful, and looks to me like it belongs. When I first put it on in 1983, it was much older than the guitar, which had never heard the word “vintage.” I didn’t care: there it was, I could afford it, it worked. Both the guitar and the tailpiece were present in the same period of time, so it seemed correct to me.

Aesthetically, the short/wrong Bigs without t-bar looks better to me on the 335 than the one you now have, Paul. It’s a thought. Of the solutions proffered here, I still prefer somehow capping the remaining bushings with low maple plugs, if that’s feasible.

I think aesthetically you gotta make the holes disappear (insofar as possible) - or put something there that at least LOOKS like it has purpose. Not something that calls attention to them, making an observer say either “why the hell did he put that there” or “I guess he thought he had to dress up the holes.”

So I like either Jack’s functional t-bar - in conjunction with a t-bar-free Bigsby - or Doppler’s suggestion of something looking important (preferably complicated and mysterious) that doesn’t do anything. Maybe a row of little electric motors, with wires routed from their shells going to each string post on the Bigsby. You can say it’s Gibson’s new auto-tuning system.

My first good guitar is this 1969 ES-335, bought new. It originally had a trapeze tailpiece, and plastic saddles. Around 1978 I (bravely) drilled holes for a stop tailpiece, replaced the tuners with Grovers, and put in metal saddles. Several years ago I put the original Kluson tuners back on - the Grovers just looked wrong. Lately I've been thinking about reinstalling the trapeze tailpiece (still have it) and getting a "CUSTOM MADE" plate from Philadelphia Luthier to cover the holes. I kinda wish I installed a Bigsby instead of the stop tailpiece - but only because I wouldn't have to cover any holes when I put the trapeze tailpiece back on!

(Or should I go crazy and have them inscribe my name on the plate?)

Nielda, you have owned it for fifty years and are entitled to make it yours. Proudly put your name on the plate!

Baba Joe - okay! (That didn’t take much convincing.) It’s the 50 year anniversary - I’ll return it to its 1969 state and put my name on the cover plate.

Paul, nearly every electric guitar that I have owned has had a vibrato of some sort, dating back to my first, the Harmony H-76 in my avatar that I picked up in 1965. I have not owned a 335 but I had an Epiphone Sheraton II and I did put a B7 on it. The guitar was black and I found some caps that I inserted into the studs so it pretty well hid them. This picture shows the Bigsby and the plastic caps that I got from a Harley dealer that I used:

Having said that, I don't think I would do the same thing with the 335 and it is all based on the holes that are left. I have never cared for the "Custom" Plaque that Gibson used. If I really wanted to have a Vibrato on the 335 and I had one with a stop tailpiece, I think I would get a Les Trem or I would just leave it vibrato-less. 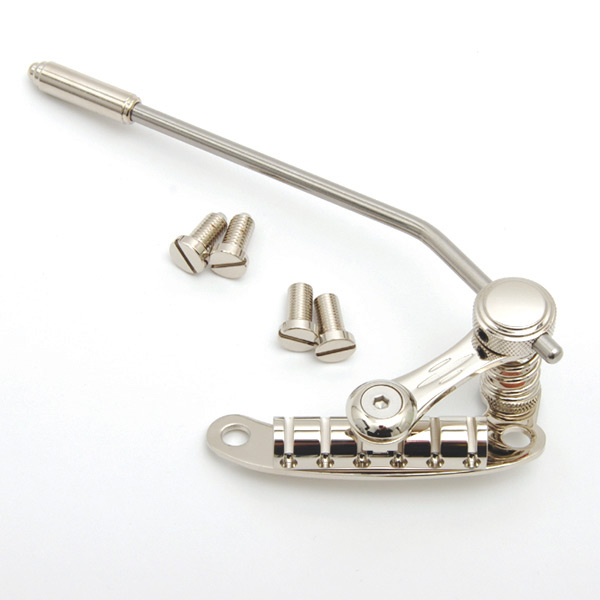 No bigsby final decision. Sounds good the way it is

A man needs a guitar he can grab onto with both hands....but on a 335, I'd use a Gibson unit. They work really well on Gibsons & Rickenbackers.

A man needs a guitar he can grab onto with both hands....but on a 335, I'd use a Gibson unit. They work really well on Gibsons & Rickenbackers.

This looks like what I have on my Epi SG Maestro. Looks cool but is too long and high with the tip on. I leave it off. Maybe fits better on an ES 335?

That pic brings out my maternal instincts. Just as I make sure to never run with scissors I would be very wary of leaving my guitar on a stand so close to a swimming pool!

How does this one make you feel?

Glad the guitar is acting as sunscreen.

No bigsby final decision. Sounds good the way it is

Sometimes you just have to leave well enough alone!!!! That's why my beloved thinline Cabronita with T-90s is still Bigsby-less...