Last week it was the short scale 22.5" Melody Maker and that's still true this week.

Should have jumped in this one 2 weeks ago.

Got a big car repair bill facing me tho so have to figure out what gear has to go up for sale 2 amps and one guitar, I would say.

Well don't be too disheartened! I used to work in a guitar store and we handled Rickenbacker guitars. It was a very informative experience for me because I got to play a lot of their models through a variety of amps. To be honest the only combination which really impressed me was the Ricky 12-string (330 I think) through a Vox (Korg) AC30.

I was impressed by the workmanship and finish but didn't care for the tiny frets with lacquer scraped off them.

One model we carried for Beatles tragics was the little John Lennon guitar - from memory was it the 325? It was the small black one with the short scale. Well it was so short that we had to string it with 12-52 at least or it wouldn't play in tune as the string tension was so low. The tailpiece exerted very little pressure over the bridge and the headstock didn't place much pressure over the nut either. All-in-all it was a bugger to play and didn't really sound very good either! The only usable sound was with everything on full and turn up the amp. Ok for chunka-chunka chords but that's about it.

Now that’s a fabulously and precisely descriptive term. (Of course one can substitute the tragic object that meets the need of the moment.) I’ll remember it. 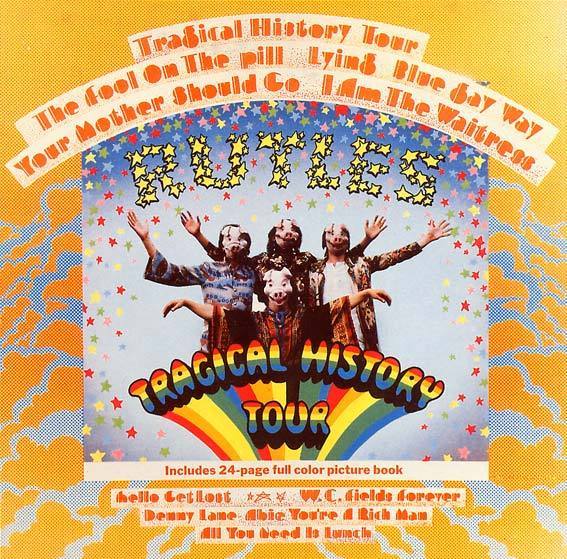 No Idle pun, this!

How about a 16” scale Mosrite for your recent fetish?

How about a 16” scale Mosrite for your recent fetish?

Well there's an 18.5" Japanese Tele I want. But very few over here. This would be interesting also but I'm not into buying from Intense Japanese Dudes. Still after the Duo Sonic 22.7 gets here, there will be one more buy of something.

If only this had maple necks. It would satisfy your actively short scale fetish and your lust for double necks. Starting at 2:32.

DC, on the Rickenbacker front, you might also consider the Electro ES-16, Rick made at least two "Electro" branded economy models, ES-16 and ES-17. Here's the short scale ES-16. The ES-17 has the cresting wave body and a longer scale.

Love me some Joe Maphis.

So far the only Electros I had seen were the 21 fret ones still @ short scale but it does appear here there is an 18 fret one, like the Rick 1000.

Intense Japanese Dudes: Offering you a recent Duo Sonic you can buy new here for under $500 for $1200;

And descriptions drawn from some Demented Alternative Reality. A Rick 1000 did sell on Reverb for $1400 or so -- theirs is $2700. They came over and bought up stuff in the 90s -- on pure speculation. They can have it.

I wonder if the neck width is even more tiny.

I wonder if the neck width is even more tiny.

Another Rickenbacker option would be a 320. People ask dumb prices for them, but the only one I found that actually sold on eBay sold for $1299.

I suppose the higher asking prices are due to the tenuous Beatle connection, but I don't know any Beatle nuts who would pay big bucks for a guitar that is only kind of like Lennon's. They want every screw and contour to be identical.

I had one when I was a kid. My parents were so happy that I was not only finally genuinely devoting myself to an instrument, but doing to to play the music of their youth, that they got me a 320 for my birthday present in 7th grade. $700 new in 1988. I can't see any reason one of these should command a whole lot more than $1000 30 years later.