I wonder if the difference in tops between the Gibson and Epi play a part in the feedback differential, along with the Epi’s having a P-100 stacked humperdinker instead of the Gibson’s P-90. And yeah, the pickup is weak on the Epi. Thank goodness for its having looong polepieces.

Also, the Gibson J-160e is superb. The Epiphone em-160e sucks. That might have something to do with it.

I am a Beatle fan. I know that feedback note.

Do you suppose it's a fact that all examples of the Gibson J-160e are sympathetic to that note? Is there either empirical or anecdotal evidence to that effect?

I don't know, which is why I ask. It's a very specific requirement of the guitar on your part; I wouldn't say an entirely unreasonable one, given the Beatleness of that guitar - but in fairness to Gibsiphone, there are an awful lot of Beatle songs they might be expected to test the design's performance against if they intended to meet every player's pet Beatle-sound demand.

Fan though I am, I'm not tuned in enough to have internalized what instrument was most notably used on which song - thus, whether the IFeelFine intro feedback is a particular landmark tone for the 160.

If I was trying to get that effect from that guitar with its resonant deficiency, I'd try a standard 6-band guitar graphic EQ, on which each frequency is centered on one of the six strings of the guitar. I'd pull the D-string slider down to reduce the energy coming from it, and push the slider for the A up a bit to emphasize it. Something to experiment with.

I guess I'll pile on. Here's my 1985 Matsumoku Sheraton. A truly awesome guitar.

Caliban those are the guitars I was talking about. I had one in wine red (beautiful colour) and another in the brown 'burst. At the time I also had a '79 Gibson 335 which also had a maple neck, but the Epiphones sounded better to me so they were the guitars I gigged with. The two Epis sounded virtually identical but the red one had a slimmer neck. The brown one worked better for me for longer gigs with the slightly fatter neck. Of course - because I liked the colour of the red one better!

Stock electronics on these were excellent except for the switches. The pickups were very good indeed.

Now the Japanese Epiphones are made by Terada so are obviously well made. But there was some magic in those Matsumoku Epiphones. Still, I would like to try one of the recent Terada-built Epiphone Rivieras. They make a '60s RI Riviera which looks to be a cool guitar. I have owned a Terada/Epiphone ES-335 complete with Gibson style headstock and while it was a great guitar for the money (around US$1000 used) it was no Gibson 335. It lacked the depth of tone and complexity of a good Gibson. I guess it was a lot like the "Elitist" series Epiphones.

I stalked Matsumoku Sheratons and Casinos for years on eBay before giving in and buying a Peerless Sorrento. It took quite a bit of tinkering before I really liked it.

I sometimes see Japanese Sorrentos on Ebay but they're not Matsumoku. Your Peerless looks cool - but then I am very partial to that style of guitar!

"Yes, but wouldn't the design and construction of a guitar make it so that the same string would vibrate on all those guitars?"

no. do two ES335s feed back on the same note? nope. two Strats? nope. do any two guitars in the world sound exactly alike? also nope. you're expecting a degree of repeatability and consistency that cannot exist in the real world.

I guess I'll pile on. Here's my 1985 Matsumoku Sheraton. A truly awesome guitar.

Speaking of Epiphone, Matsumoku, and Emperor...here's the real deal. Price seems steep. Worth it as an instrument, no doubt, but are 80s Epis or Matsu guitars really at this level? I don't think so...

do two ES335s feed back on the same note? nope. two Strats? nope. do any two guitars in the world sound exactly alike? also nope. you're expecting a degree of repeatability and consistency that cannot exist in the real world.

OK, I guess I was expecting if the guitar was built similarly to another, it would provide the same feedback.

Other than the wrong string feedingback, the Epi 160 actually does get me a Beatley tone. I went crazy finding the right strings and right gauge...plus setting the guitar up so the B string gives off that classic pinging sound...but I just can't get the A string to feedback.

Equalizer. You could at least try it.

Equalizer. You could at least try it.

Next time I take the guitar out, I'll give that a go.

What I have been doing is the fingernail trick. I pluck the open A string and then move my fingernail right next to it so it creates a rattling sound.

Aaaand...a 1951 Zephyr Deluxe Regent, exhibiting what Gretsch (and Gibson) had for competition at the time.

If this isn't a highly virtuous Epi, I dunno what is.

I'll just throw this out there: I've read and heard in numerous interviews, that the Beatles did not always tune to pitch (A440), particularly when they were recording with guiars only. What effect on feedback could this have played?

That's the same Epi Emperor Zephyr Regent I played at Rudy's in Manhattan along with an Electar Amp...

Totally delightful. As easy a guitar to play as I had ever enjoyed.

Rudy had it priced so no one would ever buy it!

Proteus - that Emperor you linked to is probably a nice guitar but I agree - not worth that much. The prices on some old Matsumoku stuff is getting silly. Some of the 80s Sheratons are going for 335 money. The 80s Sheratons - as long as they are Matsumoku (they could be Korean) are great, but part of the reason they were so good is that (a) Gibsons in that era weren't necessarily great, and (b) they were a helluva lot cheaper back then. As in around 1/4 the price of the Gibson but way better than 1/4 the quality.

That Emperor doesn't even have a wooden base to the bridge. It's fixed like a 330 bridge. So the geometry is all wrong for a big archtop. At least the Elitist Broadway is built correctly for a Gibson style archtop. The Elitist series of Epiphones is/was excellent but suffered for being too close in price to used Gibsons. And despite being well-built guitars they aren't as good as a Gibson. I had an early Elitist Sheraton with the historically correct mini-HBs and it played beautifully but never had the resonance of a decent Gibson.

I'll just throw this out there: I've read and heard in numerous interviews, that the Beatles did not always tune to pitch (A440), particularly when they were recording with guiars only. What effect on feedback could this have played?

All I know is the story to "I Feel Fine" is the Gibson 160 acoustic was leaning against an amp, the A string started to feedback, John liked that, it was recorded and tacked onto the beginning of "I Feel Fine." All who have a Gibson 160 say the guitar's A string naturally feedsback. Owners of the Epi 160 say the same thing - their A string feedsback. Mine? It is the D string. Bad luck for me, I guess.

I'd never known this model until I saw the post. The internet says the pickup is a DeArmond. How does it sound?

Speaking of Epiphone, Matsumoku, and Emperor...here's the real deal. Price seems steep. Worth it as an instrument, no doubt, but are 80s Epis or Matsu guitars really at this level? I don't think so...

Sellers are asking crazy prices for the Matsumoku Epis. I got lucky with mine at just over $700. That's a higher price than newer Korean or Chinese Sheraton models I'd owned in the past, but worth it IMHO.

I'm really drawn to Epiphone's Sheraton, but have a weird aversion to gold hardware on guitars.

I suspect this is from years of living in Victorian fixer-uppers, where every old fixture, doorknob, and hinge was brass plated. I grew to hate that yellow hue and the tarnish. When it came time to restoring my current home I systematically replaced all of the old brass with nickel or chrome plated hardware. The end result is a subtly brighter vibe throughout. I'm pretty convinced all of that has transferred to my taste in guitars.

That being said, there are some models that simply look great with gold hardware.
..And I will someday cave, happily, in the purchase of a g6122.

There was a time when two Prince guitarists were using Epiphones on stage. Now to be a guitarist in a Prince band, one really has to have some exquisite chops. I always found it odd that Levi and Miko went for Epis. (I could be wrong and the guitars pictured below are Gibsons, but it is true that Prince's guitarists did make use of Epiphone guitars.) 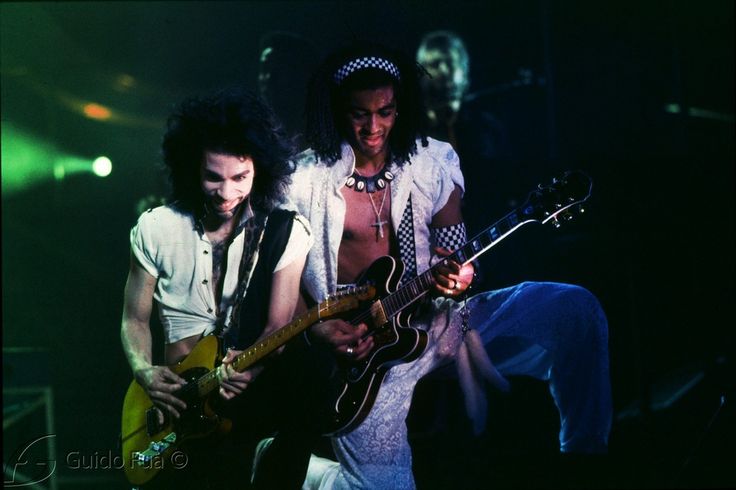 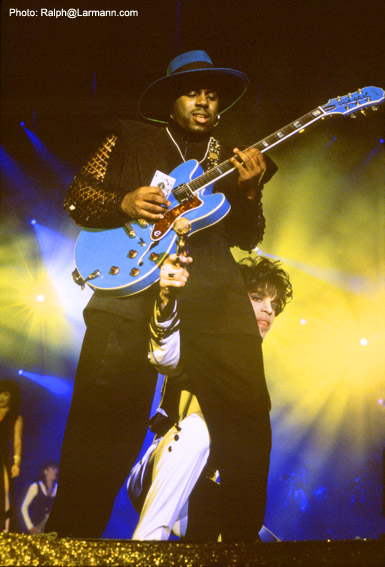 Gorgeous Sheraton Jim! Any comments on how well (or not) that Epi vibrato works?

Thanks Ed. I think the Trem-o-tone™ works quite well, but I don't have much of a background in terms of being an active user of vibrato tailpieces, and I use this one pretty gently most of the time. So, for someone who is used to using Bigsbys a lot (and "driving them hard"), mileage may vary I suppose.

I've actually considered re-routing the stringing on this guitar to de-activate the Trem-o-tone, in order to slightly increase the break angle over the bridge (it's quite shallow, due to the stock/standard neck angle on these guitars). I'll probably never try it, though, as the primary benefit would be the ability to play more aggressively and do more bends, and there's less and less of that in my playing these days. 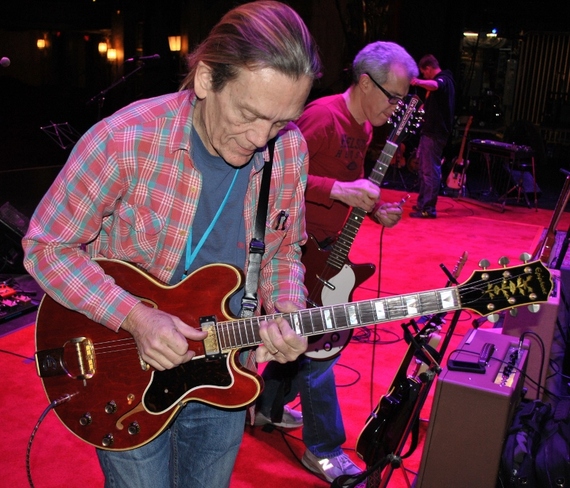