The land under the old homestead in Nova Scotia were I grew up was on record as having sold in 1828. The house would have been build shortly after that, and I recall the old boards in the walls and floors were in some cases about two feet wide. The native species in the area is red spruce. Dad was always tearing the house apart and renovating and whenever I urged him to save the old boards he ignored my request. Eventually after moving away, he finished off the remnants of the original house, and on a trip home, I put aside a small stack of boards and stored them in the barn. Eventually the barn roof leaked and most of the boards rotted, but I was able to salvage enough wood for one Telecaster body, and this is the guitar. Lately I've been playing it here at home, and having recently had the old Revox A77 open reel recorder serviced, decided to start using it. The fidelity is very good; better than my Teac A-3440.

Very nice! Really enjoyed that, thanks for posting! Can you share some pictures of the Telecaster?

Journeyman. That really was mighty fine. A lovely arrangement of one of my favourite tunes. Great tone, too -- and a nice back story. Top marks, sir.

That's awesome. A friend of mine owns a home on Cape Cod that was build around 1772. He told me that anytime you saw a nice wide board, it was special as the really good pieces of wood were supposed to be shipped back for the royal family to use. I hoping the story is true and will make your 2 foot wide board more interesting.

How are we supposed to believe this story without pics of the GUITAR? ;)

Here is a pic of the guitar with gear in my messy music room. I might have been exaggerating a bit about the boards being 2' wide, but they were at least in the 18-20" range. I keep reaching for the Bigsby that's not there, but just got a B5 from GaryE and am awating a Vibramate adaptor so I won't have to drill holes in the guitar. Its quite plain, with no stain, has a roasted maple Warmoth neck and Seymour Duncan Five-Two pickups.

That's a honey! Thanks for sharing the pic.

I feel like I'm a bit unfaithful, so here is the Tele with the other occupant of the room, about to get a new set of T-Armonds and 500K Alpha pots with shafts that don't rattle.

Random Navy Flair, actually, a year or two before the Blue Check, I think. It sounds really good, even at a low volume. My amp tech explained that the cathode bias amps have full voltage running through the tubes all the time while fixed bias amps have lower voltage at 'idle' and when a note is played the voltage rises. I don't really understand how that works, but according to him, fixed bias amps sound better when cranked a bit to reach their 'sweet spot.' Cathode bias amps reach their sweet spot a lower volumes. I did notice that on a recent recording session the Ampeg sounded better than the silverface Princeton Reverb.

I have a Tele made from a 100 year old Doug Fir beam and it doesn’t sound near as nice as that.

Beautiful guitar beautifully played and recorded. Thanks for that treat.

That sounded great!!! BTW I have that same amp, although mine has a JBL D123 speaker in it.

I have a Tele made from a 100 year old Doug Fir beam and it doesn’t sound near as nice as that.

Beautiful guitar beautifully played and recorded. Thanks for that treat.

Thanks. It must be Tavo's El Pescadoro reverb that makes the difference. Any chance of a pic?

That sounded great!!! BTW I have that same amp, although mine has a JBL D123 speaker in it.

Your story reminds me that, not that long ago, wood like this wasn't seen to have a value by most people.

What a fantastic, imaginative, expressive arrangement! A fine-looking guitar, too. I like the fact that you just let the wood assert its beauty unadorned. 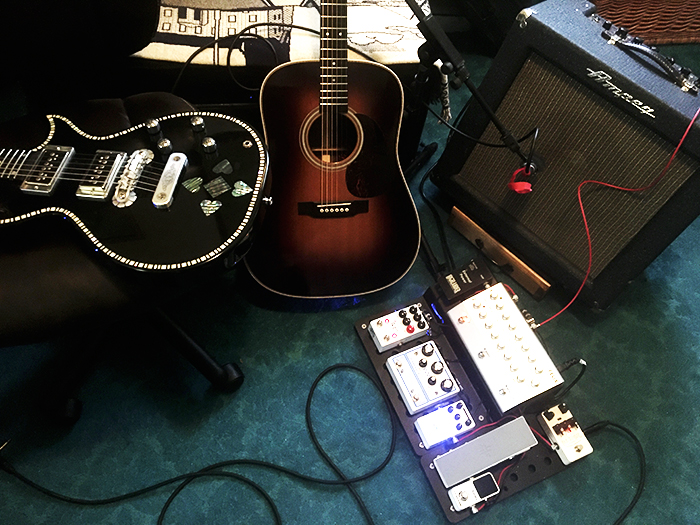 These early Ampegs are on par with the best of the era. I picked up a 63 Reverberocket a while ago. It works but doesn't sound as good as the M12. Do you use a stereo jack and run both channels? I set the 2nd channel with the tone all the way down and the 1st channel with the tone knob about half way up, then blend the two. I guess that was the original intention as accordions had (have?) two pickups; one for the lower register and one for the upper.

Yours looks to be in great condition.

I use both channels blended all the time, and sometimes I use it with a Sole-Mate reverb, and run the dry output into channel 1, and the wet output into channel 2. I love Reverberockets too, maybe yours just needs a good going through:) My Mercury really is in good condition...

Here's what it sounds like with a few pedals...

Thanks. It must be Tavo's El Pescadoro reverb that makes the difference. Any chance of a pic?

The Tele was built for me by Ajita White. It has a “Hangtown” logo as it was built from the remains of an old barn outside Placerville, CA.

Very nice and great that you could salvage some of that wood! I built my mahogany P90 Tele in 1993 from a piece of a 100 year old bed board. Fun projects!