So far it has been no problem, wish they would use a 12 saddle to avoid any future issues,

Here is my Framus Texan 12 string

Don, I remember back in the late 80s or early 90s Musicians Friend would send their catalog to me in the mail. Mind you this was before the internet for the public and I don’t know how they got my mailing information to mail me them. Well they were a small company then and not a big deal like now. Point is they used to have lots of Ric copies or knock offs back then. I forgot what brand. Maybe Rogue. I think they went for about $300 or so. If memory serves me correctly MF got in trouble by the Ric police over that and had to stop selling them. Not sure how good they were but they looked nice.

You want an 18 string guitar? 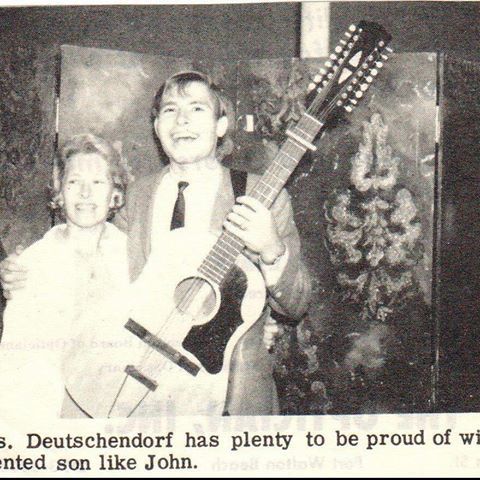 You want an 18 string guitar?

How about the Kent?

My understanding is that Randy Sparks, founder of the New Christy Minstrels, had a B45 converted to 18 strings and then loaned to his friend/protege John Denver who used it for a time.

My understanding is that Randy Sparks, founder of the New Christy Minstrels, had a B45 converted to 18 strings and then loaned to his friend/protege John Denver who used it for a time.

Methinx ‘tis the same Deutschendorf? Or did that one just fly over my head?

Neck must have had rebar for a truss rod.

Thanks, Don.... may have to look a little more closely, and yes TW, that is the one and only John Deutschendorf looking so un-Rocky mountain high in that shot.

Wonder what the thing was tuned to....

Here's mine. A very nice Takeharu from the 70's, the Gretsch and a Yamaha from the late 70's. I started with a Sigma i bought in the eighties, but compared to the Takeharu is sounded very one-dimensional. So it had to go.

Well I am down to two. My Guild GAD G212 and my Harley Benton from Thomann in Germany.

I just got this old Hoboken Guild in need of some TLC. It’s got cracks in the top, the bridge is starting to lift but it plays nice and sounds great.

I REALLY like the look of those Reverend Airwave 12's.

I like it, Dylan. All four of those 12s have different personalities - different builds, actually, and different pickups. Even different string configurations: the Rickenbacker with the octave strings on the treble side of the pairs, the Gretsch and the Italia with the more usual octaves on the bass side - and the Airwave follows that convention, but doesn't octave the 3rd string course; they're unison.

The P90s strike a good balance between fat and bright, and will chime sufficiently - and, as always, the Reverend bass contour control comes in handy (more like magical) to tweak the girth of the sound for the application at hand. There are those times you want the neck pickup or middle position for their tone, but they threaten to get muddy: back down the bass with the contour, and those tones lay right in. And while the P90 is fatter-sounding than Ric pups, again dialing back the contour finds a near enough tone.

Overall, it's a guitar with absolutely no bad habits or annoying 12-string-isms - and with chameleonic tone shaping. You can either take that as having little personality of its own - or versatile enough to take 12-strings where they don't usually go.

Of all four, though, for pure lush chimey sonic joy, it's the Gretsch 5422-12, an amazing guitar at any price, but especially for the money. Its intonation is astonishingly good for 6 saddles (waaaay better than the Ric's or the Italia's), and I don't know how they do it. The neck is also sleek and fast, and it's easy to play. And, of course, it's loaded with personality.