I came to own a very sharp-looking Guild Starfire II ST w/ Dynasonics yesterday and I'm really digging it so far. It's all mahogany, which seems to be a favourite of mine because I just realized it's the third 'hogger in a row for me. 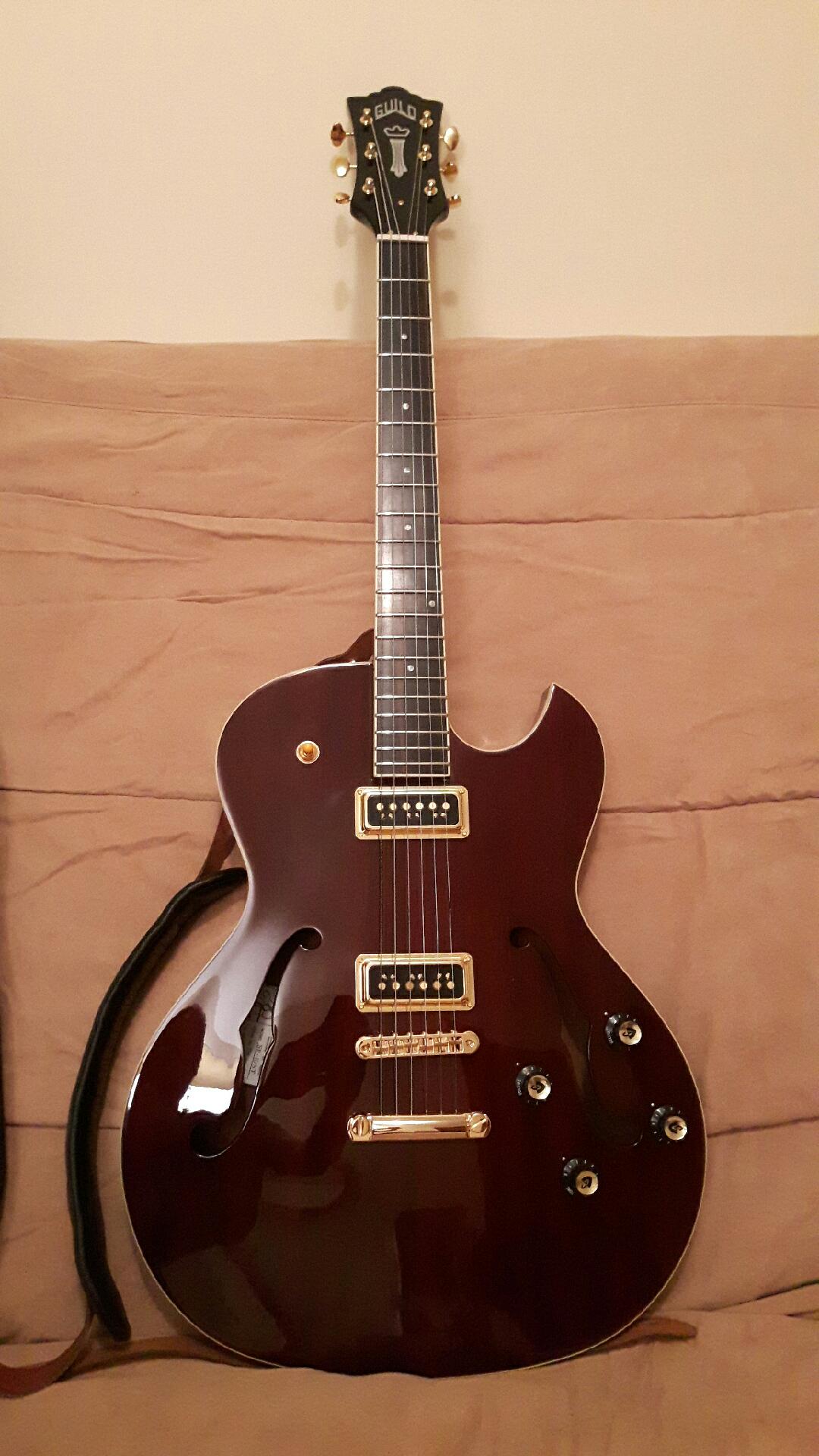 Took a shot of it sitting pretty beside my Oops Country Club. 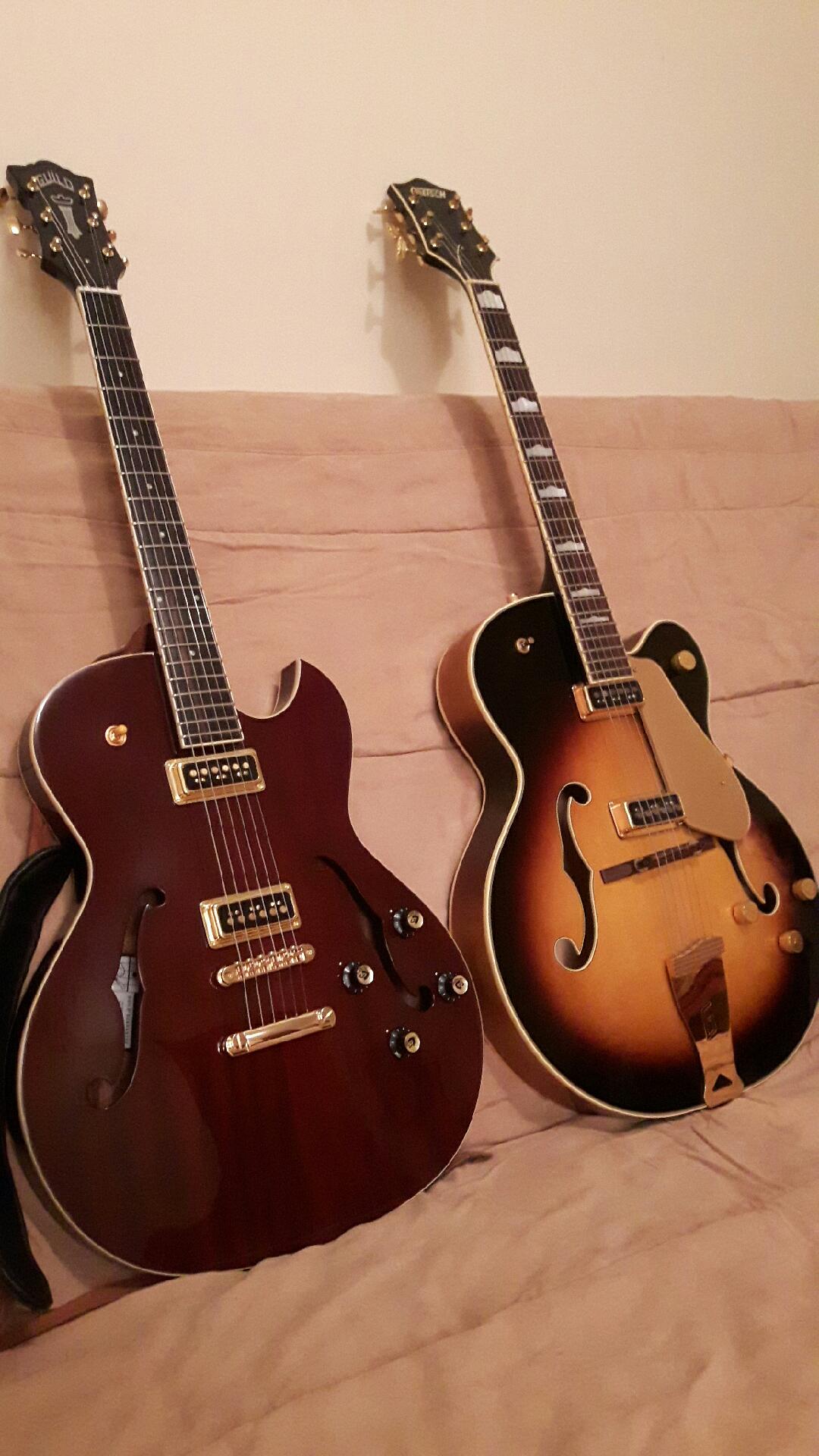 The D'Armond Dynas sound similar to the Gretsch versions, but not the same. They aren't as distinct and sound closer to regular single coils, but I wouldn't know that if I couldn't compare them against the Club. 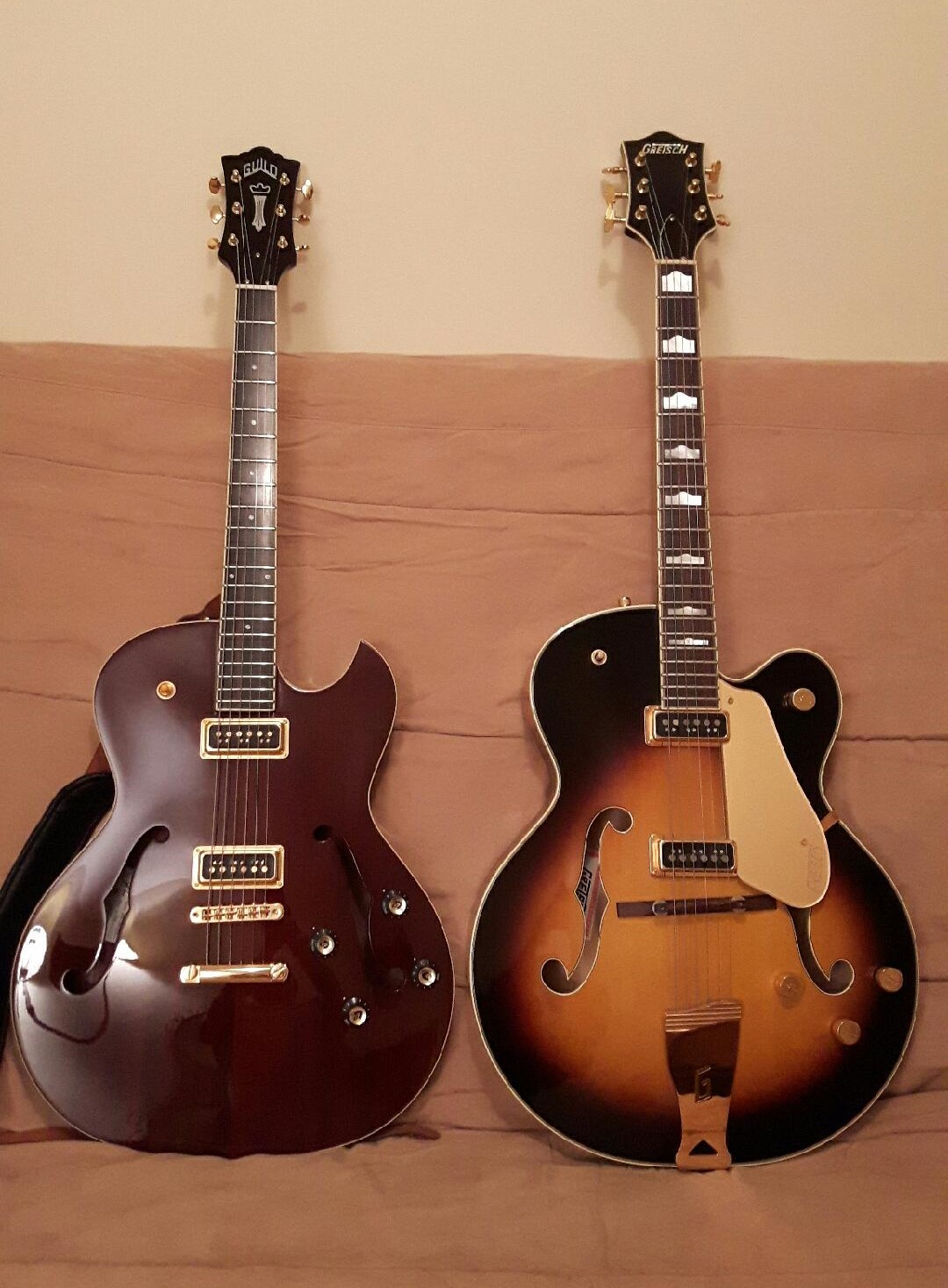 The only negative surprise was the cliff-like drop off on the volume pots. From 10-9 is about a 50% drop, which makes them really noisy in the middle position if you blend at all. I'll keep it as it is for now, but am already thinking about a TVJones upgrade.

Nice - and nice Club too!

They've got an X175 "Manhattan Special" with the Guild vibrato and white-topped Dynas, but I was looking for the hard tail.

They've got an X175 "Manhattan Special" with the Guild vibrato and white-topped Dynas, but I was looking for the hard tail.

Sweetwater sold a non-vibrato only version (harp tailpiece) of the X-175 Special as a Sweetwater exclusive, with a white finish, for just shy of $1100. I debated buying one (especially after I read a review of the X-175 Special, where the reviewer stated he thought the neck was a bit chunkier than what Guild's specs stated). When I decided to pull the trigger on one a week plus ago (only days after I discovered it on Sweetwater's website), the last of them had sold out, and Sweetwater had removed it from their listings of guitars for sale

BTW, what's the neck like on the Dyna loaded Starfire. I've had an interest in these since I found out about them a couple of months ago, but specs on Guild's website, indicate the neck is kind of thin. Is it chunkier than their specs claim (kind if like what I read in that review for the X-175 Manhattan Special)?

It's a bit chunkier than my Tele but not as thick as the Gretsch. They say it's a soft-U in the specs. It's my first Guild so I can't tell you how it compares to other Starfires, which I thought had thin necks. It may be considered chunky for a Starfire but it's not much different than the other 3 guits I have in the rack atm. That sucks about missing out on that X175. Have you communicated with them about it? Since it's so recent, they might have one or two in reserve or come back as exchanges.

I usually don't like guitars with Florentine cutaways, but for some reason they look good on a Starfire. Congrats.

I usually don't like guitars with Florentine cutaways, but for some reason they look good on a Starfire. Congrats.

That's a beautiful Guild Starfire, ollkorrect! It has a lovely finish, and what's not to like about mahogany? It looks fantastic next to your County Club, which is a class act itself. There's been a number of Starfires pop up on this site in the past couple of years, and I'm growing an appreciation for them. I don't know how they flew under my radar for so long, but now they have definitely piqued my interest!

Thanks Wade! It's called "Royal Brown" and the wood grain comes through more than my pics show.

I really like the thinline body style a lot.