but not a Coronado tutu.

Along with a Mosrite, the CII seems a guitartifact of the 60s I belatedly realize might fit me like a tailored suit.

Thin hollowbody, check. Sleek, unique shape within that domain, check. Slim, elegant f-holes, you bet. OK, bolt neck and 6-on-a-side tuners, but it's a Fender and I can get used to it. DeArmond single-coils, enthusiastic CHECK. Aaaanndddd a vibrato of Mustang functionality, which remains my favorite-ever design for feel.

Other than block inlays (meh), there seems nothing not to like. Considerable diversity out there, from the Wildwoods which knocked my eyes out when we drooled over Fender catalogs in study hall, to more refined and (arguably) tasteful choices.

Does anyone have anything bad to say about a late-60s, early-70s Coro II?

Well that was Fender's mid 60s top of the line, when Teles and Strats were yesterday's news, who-cares, back of the catalog stuff, being beaten out by Mustangs and Jaguars on the solid body end of things. I realize this is hard for some young folk today to realize.

I guess when the hollowbody-driven Brit invasion came along, Fender had nothing to offer so got in the game. Some cool finishes for sure... not sure bout those pickups tho. But plenty of deals to be had -- have fun shopping.

If I can find a way, I'll be adding one to my collection someday, as well.

Tim, I should have gotten this one out when you visited. A ‘67

Ah. We should have. I didn't know then!

Don't forget the kool Coronado bass ... wildwood... what were they thinking/smoking??

My favourite electric 12 of all was a Coronado.

One of my local guitar stores had a Coronado 12 string in recently. Normally they love oddball guitars but they hated this one. It couldn't/wouldn't play in tune, stay in tune, sound anything other than awful. Maybe QC wasn't so good when they built that one?

Every red-blooded human wanted a Coronado II after seeing a photo of this guy with one: 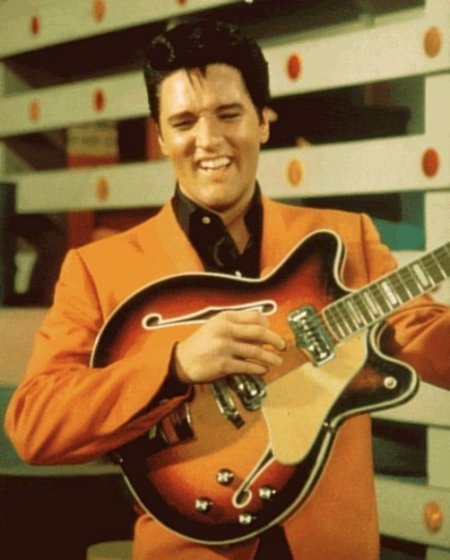 And we also wanted a Hagstrom Viking II after seeing the same guy with one: 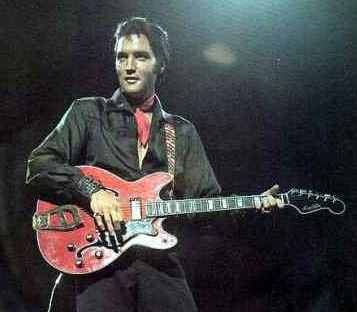 Not true. The only guitar I ever saw Elvis with that I wanted was when he played Scotty's Super 400 on the '68 Comeback Special. The Hag Viking and Fender Coronado never struck me as anything but fugly.

There must have been an underlying issue there Jimmy. The ones I've played have been fine.

I had a non-vibrato'd Coronado back in the early 00's, a really nice guitar, though I let it go for something else, all I have left is a picture of it in my garage of it sitting on the couch, lined up with all my other orange guitars (there were only 5 or so back then). I played a few of the reissues with Fidelitrons that came out a while back, they weren't the same.

Good luck in your quest.

Shuggie I'm sure you're right. It's rare to find a Fender that bad. Although a natural ash '76 Strat I once played was pretty bad... It was one of the worst guitars I have played. I knew the guy who owned it and he had it from new - I played it around 1981 or so and it was incredibly badly made. The controls didn't work, the neck was badly shaped and didn't want to stay straight, the finish was awful.

But fortunately most Fenders I have played have been fine.

For you buying a Coronado II is a totally unnecessary purchase but I'm sure you are already aware of that. While I don't know your full guitar collection I do know from your posts over the years that you have many guitars that most likely cover similar ground like your White Falcon, Duo Jet, 6120s, 5420s and even your Casino.

I know you don't want a voice of reason here but I'm only trying to help your marriage.

My wife appreciates that. I'm also wondering if it produces a sound I don't already have, and I think it may well not. But it's a combination of DeArmonds (and I think the Coros with black pickup tops are actually Dynasonics) on a thin hollow body that attracts me.

And that's exactly what my White Gent is.

So it's probably just a momentary diversion. I just remember being knocked out by them when I was a kid with a catalog, and no chance of ever actually seeing one - and now realizing a path never taken might have led me to the same place, sonically, that I've arrived at anyway.

So the primary remaining attraction would be the Mustang-like vibrato. I love those.

Mosrite, though. That may be a sound I don't have, and would often appreciate. We'll see. No desperate lust at the moment, though!

Tim, I bought a new one like EP is holding back about '66 along with a new Deluxe Reverb which I still have. I never did like that guitar, neck was too skinny and narrow. I sold it back about 2000 and bought a Tele. After I got my first Gretsch the Tele has stayed in it's case.

Not true. The only guitar I ever saw Elvis with that I wanted was when he played Scotty's Super 400 on the '68 Comeback Special. The Hag Viking and Fender Coronado never struck me as anything but fugly.

I'm with you there about that Super 400!

I'm with you there about that Super 400!

Off topic, but I have to ask...is your name really Dan Weldon? Or are you honoring the great race car driver Dan Wheldon? Man, he was something else.

Off topic, but I have to ask...is your name really Dan Weldon? Or are you honoring the great race car driver Dan Wheldon? Man, he was something else.

My name is Daniel (Patrick) Weldon, but when the race car driver died everybody called to see if I was still alive

My name is Daniel (Patrick) Weldon, but when the race car driver died everybody called to see if I was still alive

OK. Must have bee kind of weird to have a guy with the same name die. See it on the news your name...weird.

Don't know if you are a race fan, but if not, you should know that you have a great namesake. Dan Wheldon was a one of a kind. Oh, he was a great one.