Did Gibson do this to their remaining stock?

Seems like a waste to me. Would have been better to donate them imo.

This explains all the headstock breaking.

Should have had OK-Go do it.

There's a bit of info in this Reverb article. Apparently it's the Firebird X, complete with software and robo-tuners. It's a heck of a way to put distance from the Henry J years.

And this is what happens when you think you know better than your customers about what they really want...

Or put another way... dance with the one that brung ya.

Just think how valuable those that are left are now worth!

Just think how valuable those that are left are now worth!

No, that principle would imply that there is a tangible demand for something.

That doesn't apply to Chia Pets, 5.25" floppy disks, or the Gibson Firebird X.

Gibson’s “explanation” raises as many questions as it answers:

Okaaaaay...the implication of the first graph is that Gibson either owned the guitars at the time they were crushed, or at least knew the stunt had happened. I suppose it’s possible they remaindered them at a fraction of their cost - or gave them - to a third party whose intention was to create just such a click-bait video.

Because really, if you had to destroy a pile of guitars, would you hit upon laying them out neatly in rows, then rolling over them with a tracked earthmoving vehicle - and still have to clean up the remains - as the best approach? And would you film it?

The video was clearly made to be uploaded, and if it wasn’t Gibson’s work, they surely knew about it. It appears they’re trying to distance themselves from it now - or rationalize it. From the last sentence of the first graph and all the second one, it’s obvious they realize the first reasonable response, even from a viewer who despised those guitars and the idiocy which spawned them, would be “yeah, ok - but why didn’t you donate them to the hundreds of school and community music programs across the country which beg for support?”

It’s like they know how egregious it appears, and they proceed to protest too much about their charitable virtue. Which only makes it look more like they were in it up to their eye teeth.

My response: what a profligate waste of resources, energy, and labor. For all the model’s misbegotten goofiness, no one ever suggested it was unplayable. They could have been used. Hundreds of kids and their teachers would have been thrilled with them.

I’m trying to wrap my head around “unsalvageable and damaged with unsafe components.” Anyone venture a guess as to what sort of components in an electric guitar could be unsafe?

I don’t buy it. But if any issue, surely nothing that couldn’t be remediated for a small fraction of the cost of a pro-grade (though stupid) guitar.

I smell a fat tax deduction - offloading a pile of unsalable (but not unplayable) inventory for pennies each (or less), labeling it unsalvageable, then taking a writeoff based on manufacturing cost (if not for lost profits as well).

And I’m trying to figure who at Gibson could ever have thought it would be good to video the staged destruction and have it go public. Or did an idiot at the contractor think the earthmover stunt would be cute? In that plot, Gibson may not be responsible for the silly theatrics, but is still culpable for destroying guitars that could have been donated.

So maybe we owe the contractor idiot thanks for making sure Gibson's wanton waste came to public attention?

In any case, another supremely weird episode in Gibson history, right up there with the Hendrix Strat and guitars shaped like Airstream trailers.

I’m trying to wrap my head around “unsalvageable and damaged with unsafe components.” Anyone venture a guess as to what sort of components in an electric guitar could be unsafe?

The most unsafe thing about those guitars is the bad-vibe megalomaniac Henry J "ju-ju." 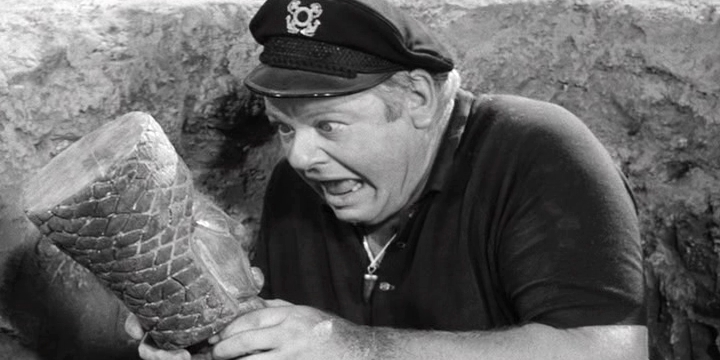 I'm pretty sure this was unsold stock. If you look in the background (before the guy walks on them), you can see clean white shipping boxes with the red X on them filling up one (or two) large open containers. There seem to be stacks of guitar cases nearby too. Some of the guitars had hang tags on them.

I bet these were contracted to a paid third party with orders to destroy and document the destruction as proof of the job done; I can't see Gibson employees doing this. I doubt this video was meant for public consumption.

I used to work in bookstores. When mass-market paperback books didn't sell, you couldn't ship them back to the publisher as the shipping cost was too high. You would rip the cover off and send that back as proof that the book had been destroyed. This is still the current practice.

Pete Townsend could have done the job faster and more entertainingly.

Gibson should sue themselves for excessive goofiness.

I think I might want one of those now! There are some blue ones!

John- Thanks for posting this. YIKES! Yes, a total waste. Companies do destroy excess inventory (for different reasons), but this is absurd. Agree with those who say they could have been donated.

Here's an interview with the former Gibson employee who took the video.

I’ve been hoping for good things from Gibson...hoping they can right the ship, and what we get is the Agnesi video and this. They should study Fred and Dinah as an example of conducting themselves with class, because they sure could use some.

I also find it hard to believe that there was anything "unsafe" about those instruments.

They should have repurposed them. Guitars for Vets would have gratefully accepted them as donations, & put 'em to good use.

Forrest Gump said it best: "Stupid is, as stupid does".

Japanese dealers are blowing these out for $2600 on Ebay! I wonder if they've seen the video?

Seen this today,what a total waste ,there must be 300 odd guitars there ,i don't buy Gibson's explanation that they were faulty.

They were destroying 335's in the Memphis plant too,perfectly good serviceable unfinished guitars that got left behind.

My first thought was that these were seized counterfeit Chinese infringements or that sort of thing. I definitely agree with Proteus above--why the Rube Goldberg destruction methods of a nature we haven't seen since Evel Knieval jumped the Snake River canyon unless the entire point was the uploadable video?

If these were actual Gibsons and not counterfeits (which I would really need to be convinced of) then it's a pretty sick joke. Did Gibson really own up to destroying these as actual Gibson guitars per Proteus' quoted press release?

As mentioned above there are veterans and others quite worthy of guitar charity. And what about those videos we've shared with each other over the years about these pretty amazing kids in Africa who make guitars out of cigar boxes and play like Les Paul? Gibson could have had the tax write off and some needed good PR in one swoop instead of this, which is why I don't believe this.

Yes, Proteus' quoted Gibson "press release" was taken from an update to the Reverb story.

In short, Gibson admitted destroying their own products, in the manner depicted in the video. And justified that destruction by saying that the guitars were unsafe.

My first thought was that these were seized counterfeit Chinese infringements or that sort of thing. I definitely agree with Proteus above--why the Rube Goldberg destruction methods of a nature we haven't seen since Evel Knieval jumped the Snake River canyon unless the entire point was the uploadable video?

It seems like Gibson is still determined to make a "statement" at every turn. How many times to these "statements" have to bite them in the ass before they cut it out and do what everybody was hoping they would and just let the guitars speak for themselves?

I guess I can be sold on the premise that they were un-sellable but I agree with a lot of points made about donating or piecing them out but I can imagine the labor cost of deconstructing all of them would be astronomical. I smell a bit of BS in the air when he talks about sawing imperfect bodies due to QC issues though.

Back in the day maybe 25 year ago, I'd heard from various independent sources that Fender dumped a lot of old stock amp stuff in some undisclosed location, but a few dealers found out and raided it and came back with cabs, NOS silver panels, even speakers.