I've had my guitar tech do a few refin jobs over the years:

My "Astro-Sonic" ('65-'68? Astro-Jet body/custom made neck with TV Jones T-Armonds, Mastery Bridge/Tremolo) - not truly a "refin" as the body was unfinished when I got it. So I guess it was a commissioned "finish" job. 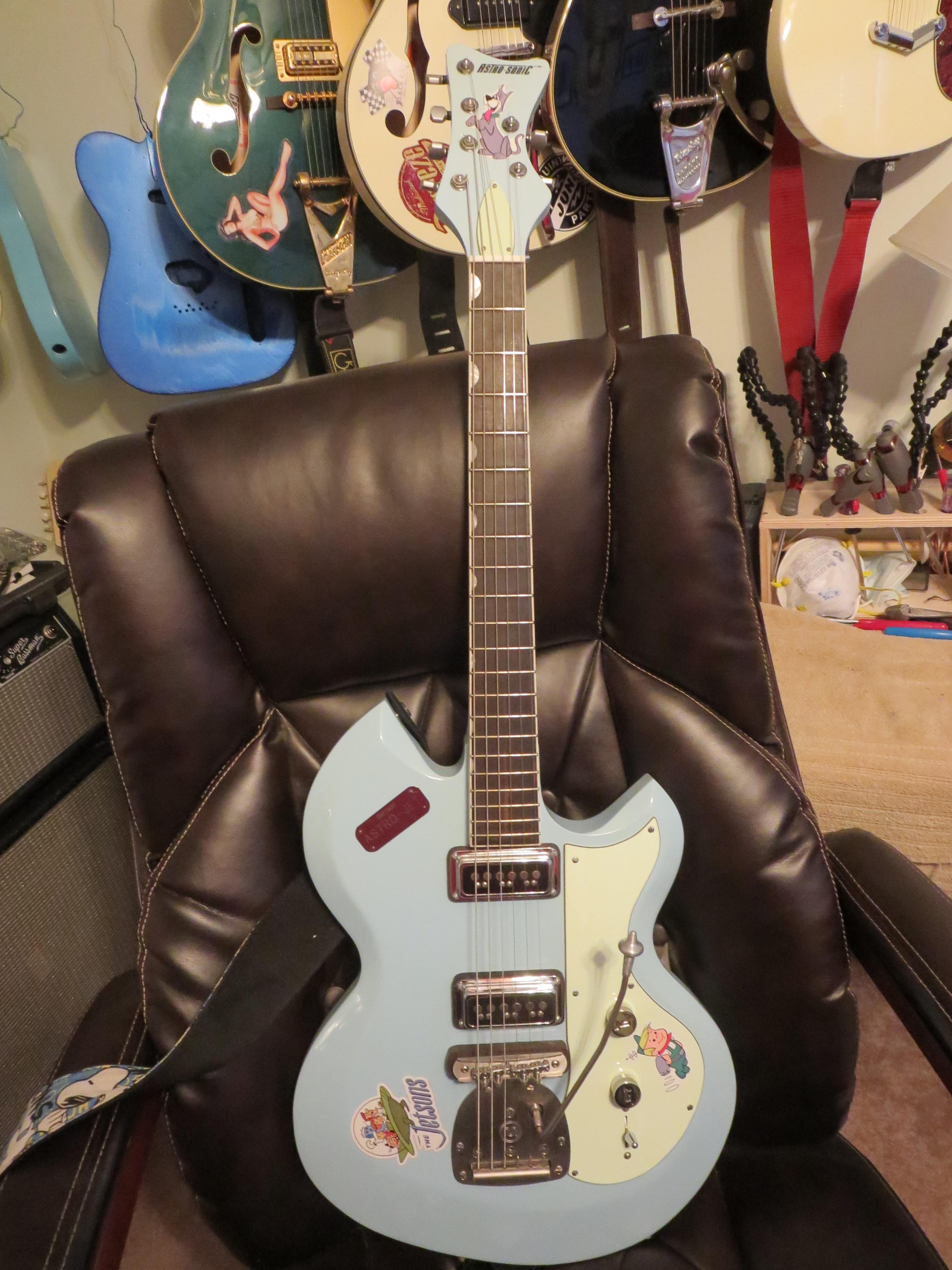 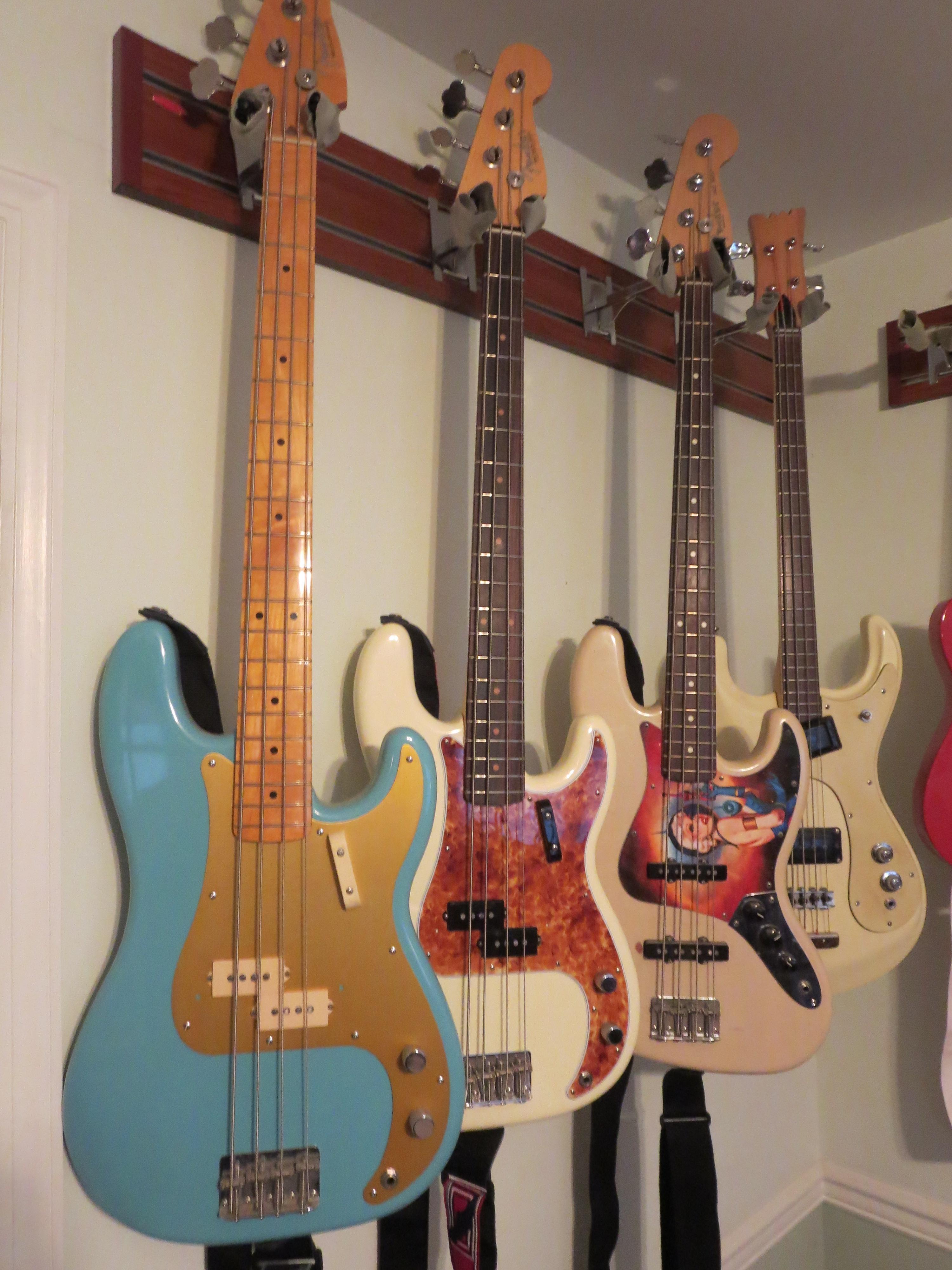 Restored a '66 Fender Mustang back to it's Olympic White glory from its Stripper 'Stang days (yes, that's glitter on the original pickguard from a previous owner, which my tech thankfully restored) 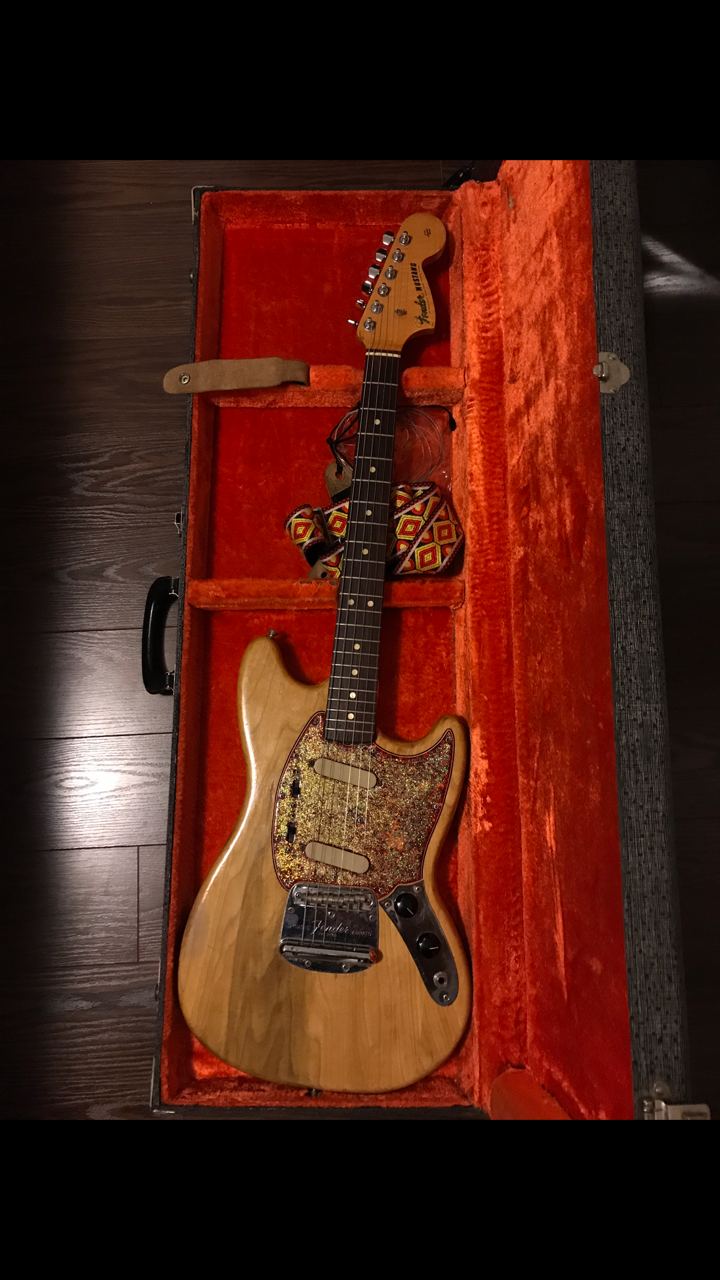 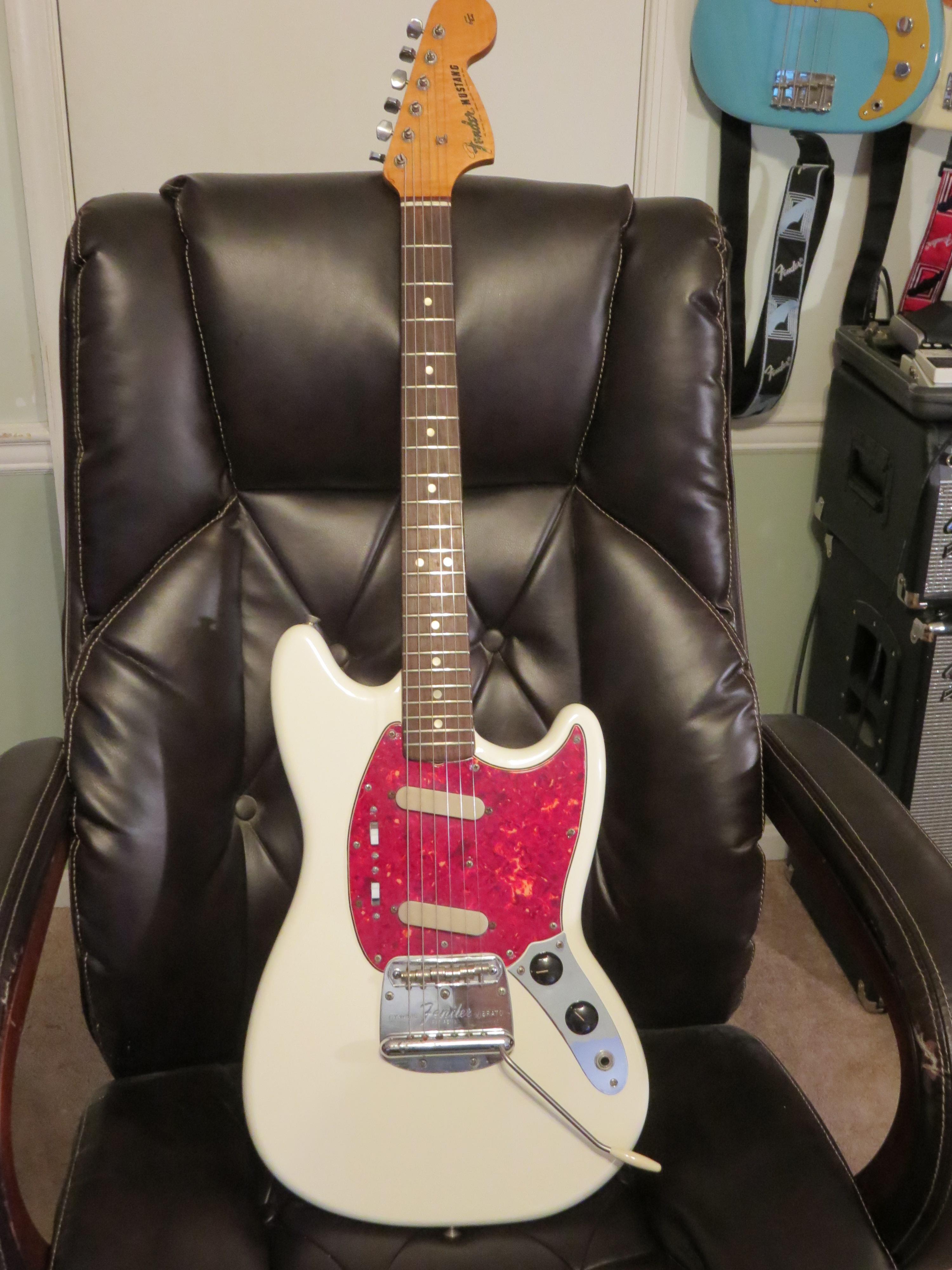 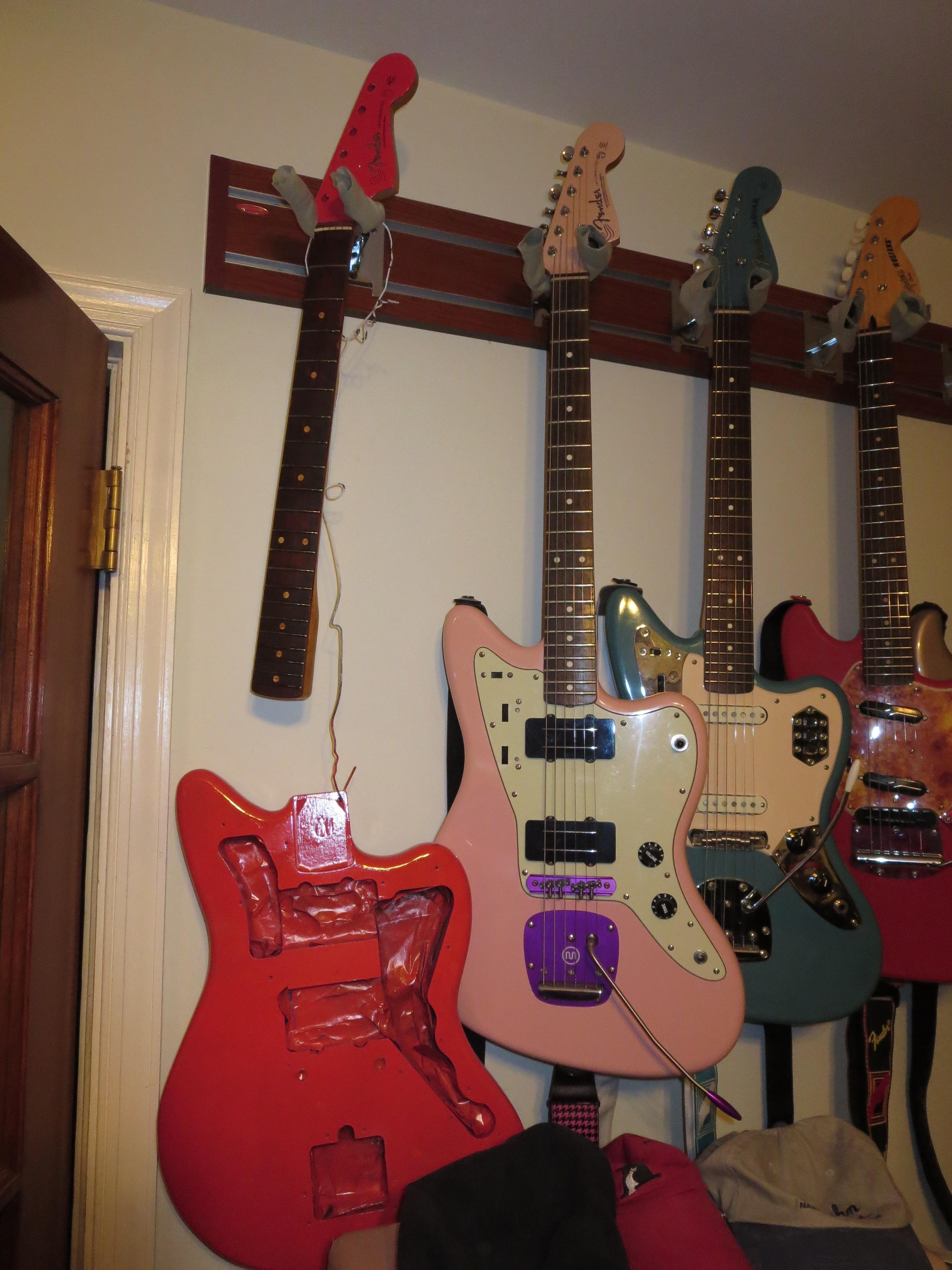 So with the pandemic and everything going on, I've been doing a lot of my own guitar technical work and decided to have a go at refinishing guitars with spray cans. Some of my first efforts are far better than some of my later ones.

Recently refinished a Fender '69 Reissue Telecaster Thinline from Olympic White to Daphne Blue. The discerning viewer will note that bottom of the front (vertically under the Bigsby) that I high grit sanded a little overzealously back down to the Olympic White. Oops. Also, I really had too many Olympic White guitars, heh. 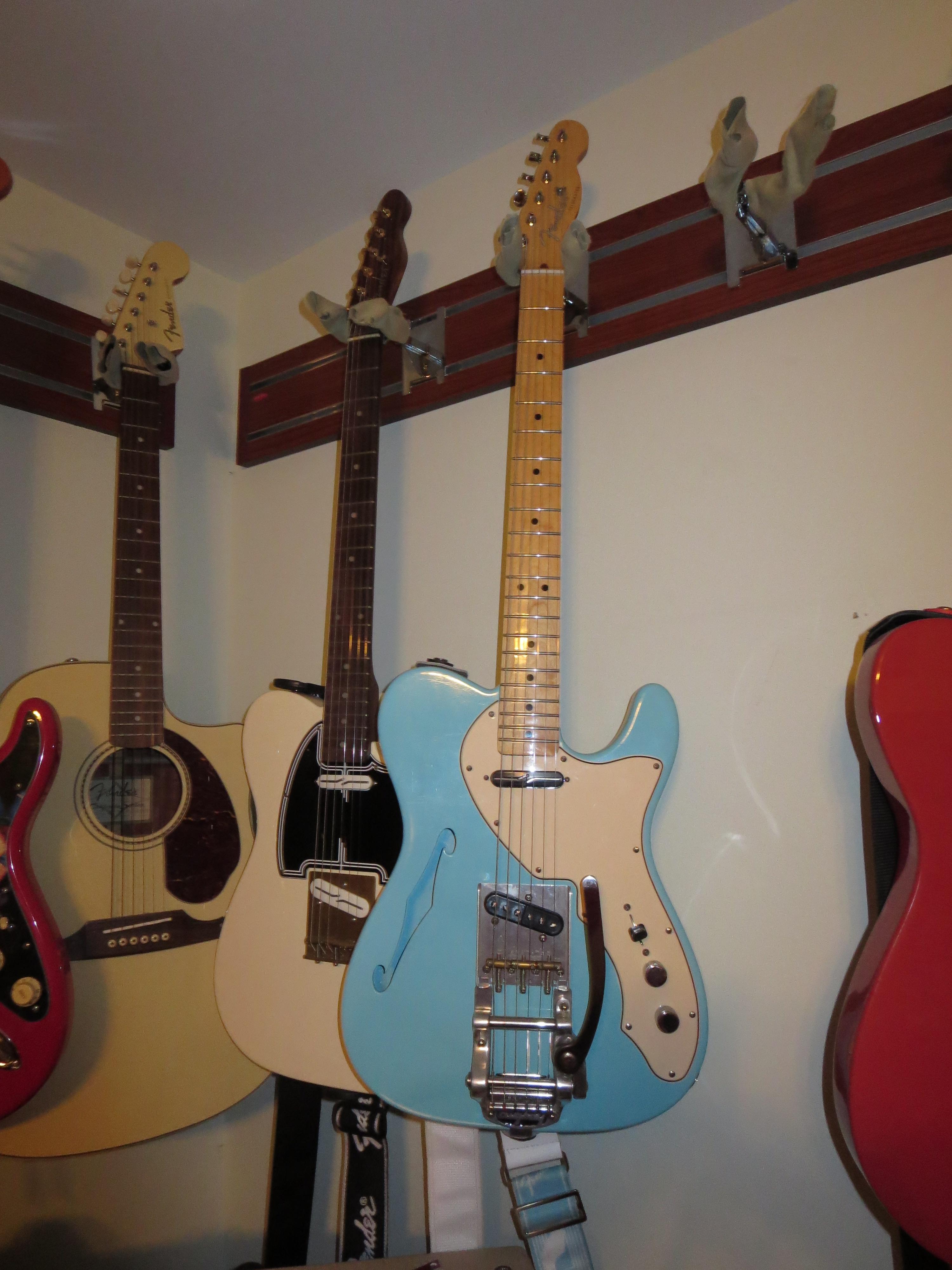 One of my current projects is refinishing an old Fender American Standard Jazz Bass (yes, again in poly Olympic White) in Shell Pink. I'm waiting for delivery of a roasted maple neck, otherwise, she's mostly put back together. Here she is with her original neck that I refin'd with a matching Shell Pink headstock...decided I wasn't liking the rosewood fretboard with the shell pink. Also, I used some dark brown stain to somewhat (i.e., badly?) replicate the clay dot fret markers look. I did the same for the Vintera '60s Jazzmaster where it turned out a bit better as well as on a tele neck for another project. Anyhoo, thus the new roasted maple neck. I also put in some Fender Custom Shop Custom '60s Jazz pickups. You can see this bass in it's original Olympic White in the photo with the Fender '57 RI Precision in the 2nd photo above. 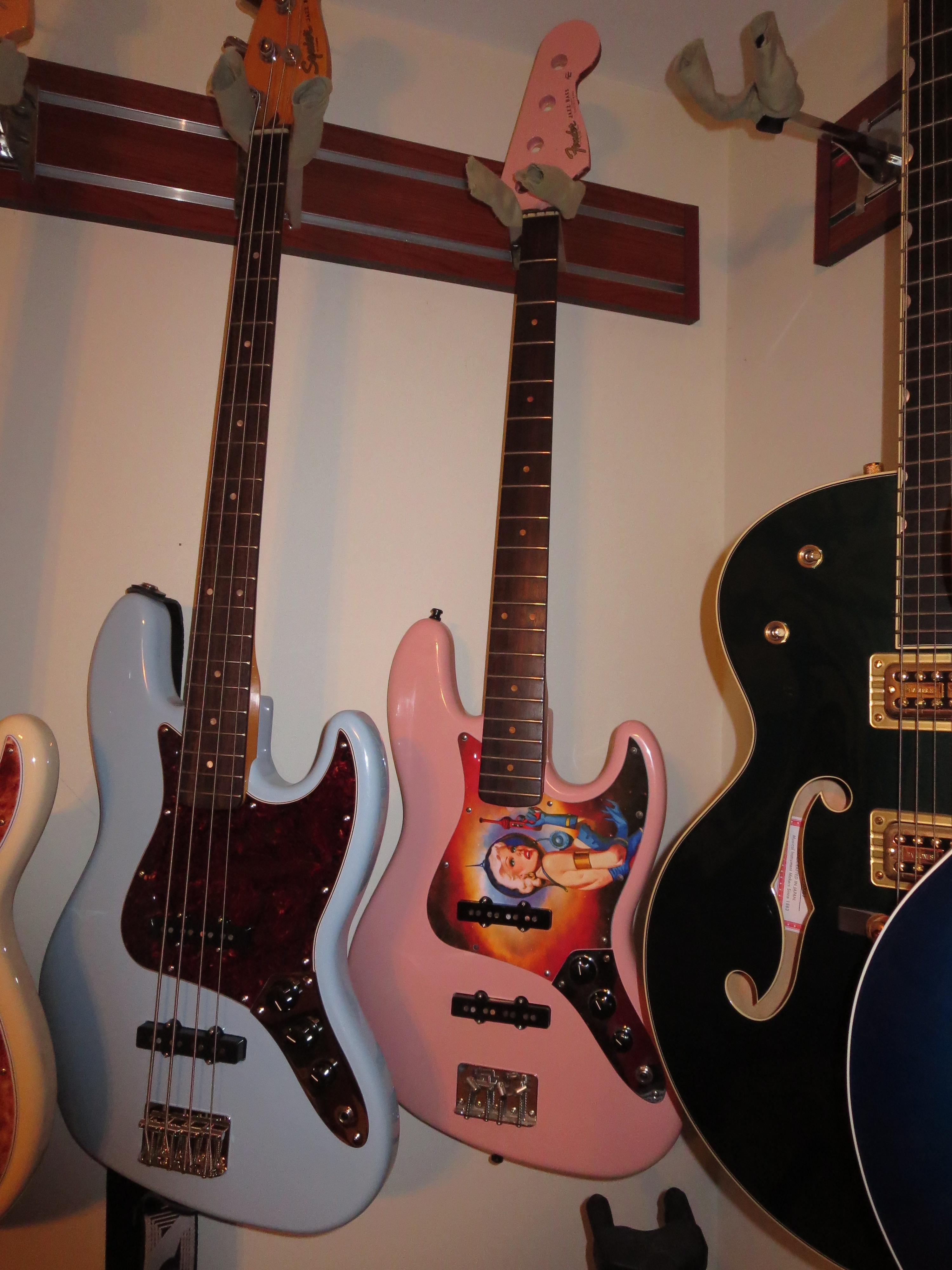 Today I actually spent a few hours stripping and sanding down one of my telecasters for the second time for a third refin attempt. I had initially heat-gunned (successfully) the original poly black paint off. This is the only down-to-the-wood guitar as opposed to the others where I simply refin'd over the original poly coat on the other projects.

My first attempt was to refin first lacquer coats as a base before the paint to hold the paint (Lake Placid Blue), then the second attempt was with some primer. Unfortunately, both attempts didn't work out so well. Frankly it was a train wreck. I'm going to remove any leftover paint that I couldn't remove with the heat gun or sanding with some Kwik Strip. Then I think I'll give a dark walnut or mahogany stain look. Any tips are gratefully welcomed.

I've done a few. My first was a 64 Country Club,, there was a Yamaha AE1200S and the a late 60s Hofner 457-12, not all entirely necessary but all were compromised as far as collectibility goes already. Usually I start off all excited, then I start doing it, then it's a giant PITA cause I don't have a buffing wheel. I get part way though and think why oh why and then I finally finish and think, it looks good but I don't like shiny new finishes and then maybe I sell it and forget what a PITA it was till the next time I do it and I'm halfway through.

Last time I used a water and oil based poly (eurothane not ester) finish. Next time it will be back to Nitro as the burning in business more than makes up for the irritation of building a temporary ventilated 'spray booth'

This one was fun, it was important to match the original color.

This was a train wreck, funky awful black 4001 Ric that needed a refin.

Is that normal on a Ric? The drilled canal from the pickup cavity to the switch cavity? Woof!

Yeah that's the Ric way, most of the stuff under the hood is pretty basic. If they switched to CNC the machine would be asking questions.

I've never re-painted a guitar, but decades ago I stripped a couple (with a combination of super-grit sandpaper, sanding discs on power drills, some wretched chemical or another, putty knives, and successively finer grades of paper...but no blocking or wide sanding belt), then stained (with old t-shirts) and tung-oiled them.

They looked exactly like that process would suggest: almost as good as a C student in a first-year shop class would turn out - without teacher supervision.

In some pursuits, I learned my limitations early.

When we were younger the wretched chemicals worked better...

I think Tung Oil is the easiest wipe on finish, even today. Wipe on Poly takes technique, and it is very hard to get High Gloss. Works fine for Satin/SemiGloss, never looks "wet" to me. As is the case always, it's all in the prep work.

This one, helping someone out. Long story of a factory paint job gone bad.

I never did a refin but own two done by a local guy prior to my purchase. The White Falcon was stripped and refinished several years ago and is nicely aging. The 5125 is more radical and always gets a smile.

I received this 1968 Corvette as a gift from a coworker.

I supplied my luthier friend with the finish that ended up on it at first. It wasn't quite the Setzer Hot Rod style purple I envisioned so I sent it to Curt.

Curt performed his Old School Guitars Master Jedi nitrocellulose finish on it and now it looks like this.

This was a DIY Squier Affinity Tele that I stripped the thick, black plastic finish and applied a ReRanch TV Yellow finish. It was a lot of work but worth it. The thinner finish really does improve not only the acoustic tone but I could tell the plugged in tone was more alive. I sold the guitar to drzombi. I wonder if the good doctor still has it? It is one I miss sometimes.

Here is the TV Yellow finish.

Bought a '71 Gibson Les Paul Custom, new from Cintioli's in NE Philly (only $275). Black Beauty, Fretless Wonder, Gold Trim ... sweet. Joined a band in '74 and felt the need to customize (????), so I put in jumbo frets, DiMarzio pups, covered it with contact paper and glued leopard skin fur to it. Doesn't everybody? Went to work for Gretsch in '75, so it went into the closet. Played with another band in '79 and got a longterm gig that came with a motel room, so I decided to refin the LP. Ripped the fur off, zip stripped off the black, and sanded it down to bare wood. Hung it from the infrared light fixture on the ceiling in the bathroom of the motel room and sprayed it with Ace Hardware clear lacquer, turned on the red light, quick closed the door and went to the gig. Did that about 20 times. It came out pretty good.

glued leopard skin fur to it. Doesn't everybody?

I went for snakeskin.

I had a ReFin plan of sorts once with an old Epi Emperor case. It had been re-covered no less than twice, and was in really sad shape. I took it down to the bones, filled, sanded, prepped.

And I had a line on Snakeskin Tolex. Beautiful stuff.

I got talked out of it on a trip to Nashville looking for cases. Had I moved forward it would have been for novelty/presentation and cost a dysfunctional ratio compared to the guitar.

It was dried-out matchsticks with gluedust and otherwise useless as a protective case...

I think Ethan has done an Amp up with Snakeskin?