I have done a major purge of guitars over the past couple of months, including selling my Baja Telecaster which was a great guitar but a tonneweight and slathered in a thick poly finish.

I thought I'd be able to get by with my two Gretsches and a Dano but the fact is that I feel a fella just ought to have a Telecaster around.

So I've started the process of putting a Tele together, a sort of Transatlantic Treaty Telecaster with a mix of components from Ireland, the UK and the USA.

For the neck pickup I have a TK Smith CC II with adjustable polepieces on the way, and the bridge pickup is a 1950 Broadcaster-alike from Monty's Guitars in London.

That's what I have organised so far anyway... I think it's going to turn out real nice.

I'll keep the thread updated as progress starts to be made.

This is the direction I'm heading... I hope your Partscaster turn out as magical as mine did. The body, guard and switch plate came from KCEddieB, and JBGretschguy sourced the rest and built it. There’s nothing on the planet as good as this, IMO.

Particularly great is the 4th gear switch that puts the pups in series for a fatter humbucker option.

Yup, a CC neck pickup is a cool upgrade compared to a Tele's stock neck PU.

Here's my MJT. It's got a TK Smith neck pickup, a Vintage Vibe bridge pickup, a 5-way switch and the very useful "Bill Lawrence wiring" (the first three positions are the "regular" Tele positions; position 4 is both pickups half out of phase, and position 5 is the neck pickup with about 10% less low end than position 1).

I never really 'got' telecasters until I had to borrow one for a gig. I was quick to email teh owner Kirk Brandon to say...what the hell was that guitar? I loved it. Turned out to be a Broadcaster copy with a big U neck and two broadcaster pickups. So I found a set, nice and cheap from Fender and put them in my American Standard Telecaster. Nothing thin and transparent there, just big fat in yer face early telecaster rock and roll. I love Tele's now, they're like a big spade to dig a blues ditch with! Have fun with yours

THE Kirk Brandon? of "Tower Of Strength" fame?

Yep, we did a few supports for Spear of Destiny and I left my guitar in the car with the mrs and set off for London assuming it'd be loaded into the van. Kirk was great about it and said no problem, borrow a guitar. Bugger made me give it back though.

Plus I had to sit down as it had one of those straps that leave the guitar around your knees, too much trouble to reach over the beer belly these days

Awesome. I picked up a Nash a while ago, great guitar. I love it.

This just arrived at my friends house in Chicago... it’s coming together!

So this project has taken a decidedly different direction from the original plan.. I've ordered a set of CAR pickups, a vibrato and an armrest from the venerable T.K. Smith.

I'll just have to keep the CC and Broadcaster bridge for another project, or possibly just sell them on.

Sort of fell into the Tele Partscaster lark by accident. Went into one of those odd shops you find in the Lanes in Brighton -- secondhand clothes on the ground floor and used guitars of no great value upstairs. My kind of shop really.

This guitar was hanging up on the wall. It was a real bastard in the true sense of the word -- Tele body with gut cut on the back, S-type neck, rubbish tuners, dodgy wobbly electronics, unmarked bridge parts and pickups. But it played just great. £80 as seen. I didn't even think S-type necks would mate cleanly with a T-type cutout but they do on this one. I fitted Wilkinson tuners and bridge, a pickguard with P90 cutout, a decent loaded control plate I had in the parts drawer, and a Wilkinson minihumbucker in a P90 mount. The bridge pickup is a Duncan Broadcaster bought secondhand for £30. So got m'self a great gigging Tele for about £180.

I bought a Tele with P-90's last year but I'd love to have a T.K. Smith variation or at least one with traditional lipsticks.

I started gathering parts for a Tele build myself. I found a yellow nitro finished pine body on eBay, some Fender pickups from a 2015 American Standard also on eBay, a neck from Reverb and I'm thinking I'm going to buy the rest with some Amazon gift cards I got for Christmas. I found a control plate with 3 holes and a switch so I'm going to wire it with 2 volumes and a tone which is something I've always thought would make a Telecaster even more perfect. I didn't even know they existed but when I searched, there they were! I'm also going to use a 4 way switch for the humbucker sound in position 4. I would like to sell a guitar before I build it though so I don't take up any more room in our small place. 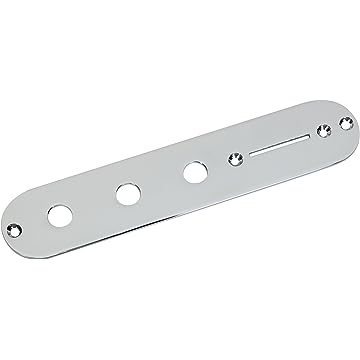 I've ordered a set of CAR pickups, a vibrato and an armrest from the venerable T.K. Smith

Well this I've gotta see. You'll need a Tru Arc to go with that vibrato.

Had a friend make me a custom partscaster. I asked for a cheap tele I could just leave out and not worry too much about.

He instead made me a player grade tele.

I've ordered a set of CAR pickups, a vibrato and an armrest from the venerable T.K. Smith

Well this I've gotta see. You'll need a Tru Arc to go with that vibrato.

I almost certainly will. Just trying to get a bridge base organised from TK.

The information you share gives me more knowledge. I am very grateful for that. atari breakout

Why hasn't this repeat scammer been banned?

Chu is a lot more active on here than Rocky, I'll give him that.

Chu is a lot more active on here than Rocky, I'll give him that.