Lots of Telecaster threads lately. I've never owned one. Don't think I've even played one, other than a lotus copy some 30 years ago. Now I'm really curious and looking at a couple Squier Classic Vibe models online. Any comments about these two tele models welcome before I pull the trigger probably later this weekend. Thanks! 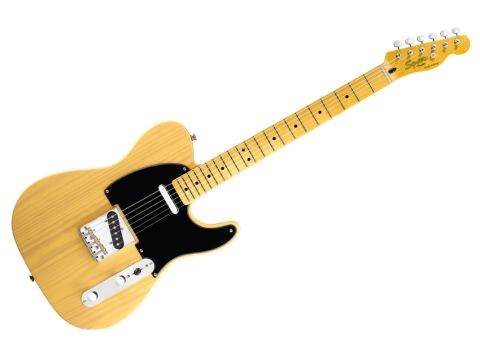 Ha! Thought about that. Also looked at a used candy apple red Baja with some oddball fingerboard.

Waaaal...the top picture isn't the 50s Classic Vibe, as it hath humbuckum at neck. But the link goes to the CV at Sweetwater.

I haven't played the one with the not-rosewood-but-laurel fretboard, but have the pine blonde CV. It sounds very much like a Tele, but is the brightest/thinnest-sounding of my several. Almost a delicate tone by comparison to some of the others. I kinda like that; it's very detailed in response to any kind of input, and of course the tone can be beefed up as needed.

The neck is also the slimmest of my Teles. It's an interesting combo of classic looks, a kind of distillation of the twang and chirp of classic tone - at a beginner/Tele-dabbler-friendly price and with a neck ideally shaped either for smaller/beginner hands - or guys used to very modern hardware.

Well worth the money, if one must have the Fender imprimatur. Not necessarily the best value if just going for the tone and feel.

Good catch Tim, I was fixin' the pic as you typed.

Bought a used Classic Vide for my nephew (the butterscotch). Good value. Can’t say anything bad about it. At that time I paired it with the ‘15 Weber speaker in the Fender Excelsior Pro amp as a birthday gift to him and it sounded nice and full when pushed.

That said, I wouldn't trade anything for my ‘52 American Vintage tele. And I never thought I wanted a tele. Everyone should own one. It surprised me.

Put a 4 way switch in, so the pups can be in series, and magic happens.

What was oddball about the Baja fretboard? The Bajas I've seen are pretty nice, as are the MIM Classic Series. I'd be inclined to go that route myself.

It's only oddball to me as I'm not familiar with Pau Ferro. Very stripey looking.

alder and rosewood all the way. but then, i'm not your typical Tele guy, and find maple-board Teles unuseable.

Classic Vibes are one of the best deals around in telecasters if you don't mind a thinner neck, but they're not something I'd buy online : some of them are crazy heavy - 70's Les Paul Custom heavy even.

Just traded away a Fender Classic Player 60's Baja Tele in Sonic Blue. It was an excellent Tele. Great pu's (Custom Shop '58 in the bridge / '52 in the neck). The stock nut was cut a little wonky (unusual for Fender) so had my tech guy put in a bone nut and the guitar was a great player. Medium C neck/nice rosewood board. If you can find one used, they are a great deal. Some prefer the 50's Baja in Butterscotch Blond. That one has killer pu's also: Custom Shop Broadcaster bridge and Twisted Tele neck and has a big V shaped neck. Another great used buy and a ton of Tele for the $$$$. Re the Squier Classic Vibe Teles, the 62 Customs tend to be of moderate weight but most of the pine bodied Butterscotch Blond 50's models I've tried have been boat anchors. Some of the earlier 50's Classic Vibes in the cream/white blond are lighter and IMO, come with better sounding Alnico 3 pu's (closer in sound/output to vintage Broadcaster pu's).

I've got that double bound rosewood classic vibe, and I love it.

My early 80’s E series MIJ 52RI Tele is my #1 player. When friends and family converge at my house that’s the one they pick up and play. Butterscotch body, original pickups and tuners and an incredible maple neck.

My two cents is to get one with the chrome Tele neck pickup. To me, that’s what separates Teles from the pack.

My early 80’s E series MIJ 52RI Tele is my #1 player. When friends and family converge at my house that’s the one they pick up and play. Butterscotch body, original pickups and tuners and an incredible maple neck.

My two cents is to get one with the chrome Tele neck pickup. To me, that’s what separates Teles from the pack.

Have to agree. On my last partscaster, that's the route I took.

I've had several different bodies/pup combos with this '83 Fullerton '52RI neck, and this current set up is sticking around.

I say the original Tele neck p/u is cooler than the bridge pickup.

The Classic Vibe 50s model is a great value. The body is pine. It's heavy and will dent easily. I modified mine into an Esquire with a Lollar Valco/Supro style pickup. You really can't go wrong with this model.

I recall that a GDP member recorded this demo of a Classic Vibe tele . . .

Well, I went with the Squier CV Custom. I like the looks, sounds nice in the above video, and was in stock. The butter scotch pine was back ordered most places.

Thanks again for all the info!

And that Classic Vibe burst Tele is awesome, that was my go to guitar every time I visited Sam Ash before they sold it.

If you bought one, you wouldn't have to go to Samash to play your go-to Tele.

I already have a Tele is the thing, but dang...That one

I was bit by the Tele bug a few years ago, now they’re always around. CV Teles are great guitars, solid twang planks. I keep trying to smash together Tele with Gretsch, just look at what I did with two donor CVC Tele bodies