Just got this new-to-me Mahogany Offset Telecaster P90 a little while ago and we're settling in together just fine. I couldn't resist a group shot of the sisters all lined up on the rug. The P90s are really, really nice. I wasn't sure what to expect as I'd never tried a Fender P90, but these won't need switching out anytime soon. 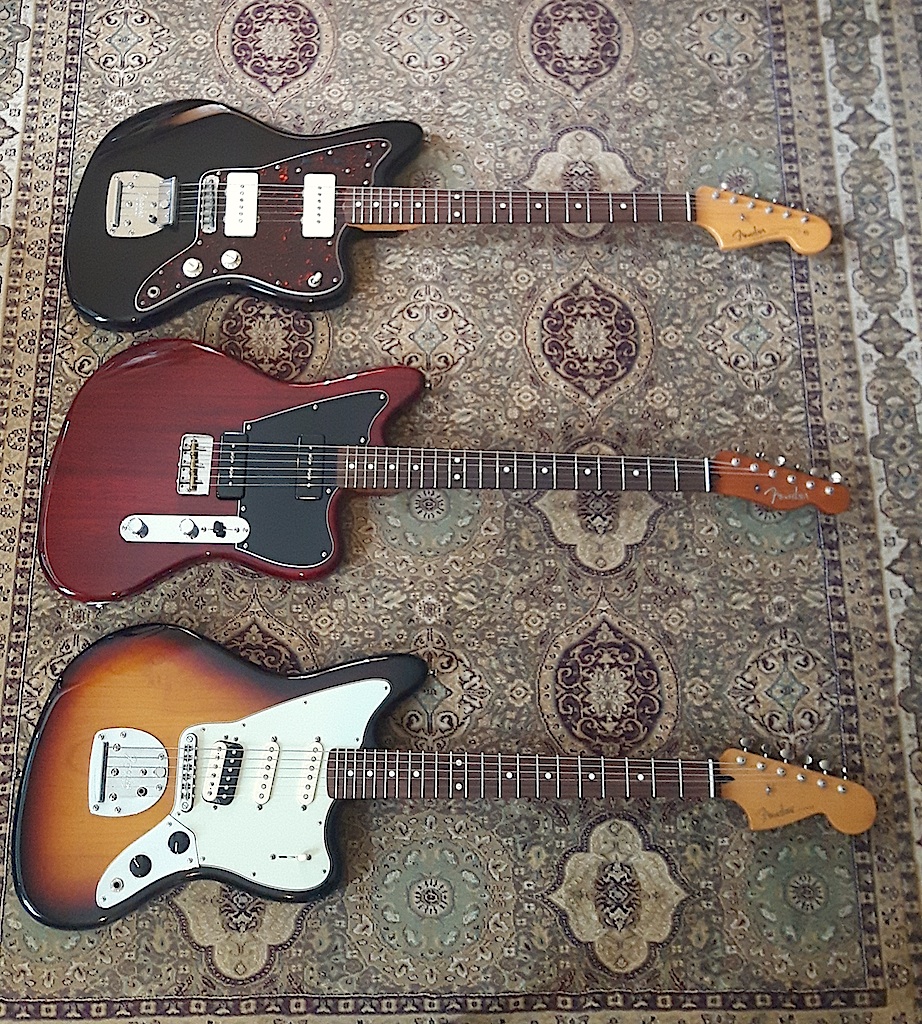 Kinda curious how that sounds. I can imagine it being the best of several worlds...or a undefined mush. Hmm.

Nice trifecta, too. Kind of a theme going on there, I guess!

I've been gassing for one of those mahogany teles....

I have been pondering making a JazzCaster, and that's an interesting alternative.

How much does it weigh?

I’ve seen those bodies for a while now. Been tempted.

Proteus - It sounds gorgeous... better than anything I've got. And thanks on the trifecta! At least there is a method to my madness.

Devil's Tool - It's 7.93 lbs on my kitchen scale. I'd read some people had returned them because they were boat anchors. I don't know if I got lucky or it was a bit overblown. It's not noticeably different from my alder/maple JM.

I like Teles (I have a Fender Britt Daniel Tele Thinline), I like offsets, and P90s are cool too. The 'hog body of your 2019 looks like shades of a rosewood Tele, and the korina 202s look just as cool if not cooler than the 2019 (I think the coolest looking Explorers and Flying Vs are the ones made out of korina). All in all, it looks like a win to me.

The only thing I don't like about it is the name. Fender Offset Telecaster P90 Mahogany is too clinical a name. It needs to called...

Ellen and Twangmeisternyc - The korina ones are absolute lookers. I love the look of the old Flying Vs, too Ellen. Natural finish is the only way to go with that one, I believe, because of the resulting matching headstock. If you wanted a JazzCaster, it would be hard to find a nicer one.

lx - Totally agree. The name is clumsy and bloated. I think there's even a 'Limited Edition' in there somewhere. It's also hard to describe to people without a picture: Tele headstock and control plate, offset body, cut-off bridgeplate with 3 brass saddles, mahogany neck and body, Gibson style P90s and the colours of a Special,... it's an odd combination. I'd call it the HogCaster.

That looks like the one I had been watching on Reverb, went back to buy it, and it was gone...

It adds yet another level of cognitive dissonance to a truly subversive mashup. Because if "red mahogany slab" translates to Gibsonese for most of us - when in reality red mahogany is all over the place in GuitarLand - what does this color say?

I like it fine...but I prefer the red...and I'd prefer either about 500.00 cheaper. But now that I know such a thing exists, I really do want one - and I was running out of things to want!

What’s the name of the model in the OP with the humbucker bridge pickup? I really like that.

Rhythmisking - Thank you, sir! I hope it wasn't the same one, mate... I got scooped myself on a faded yellow one on an Ebay sale but the seller emailed me back with an offer of the transparent crimson one a couple days later. It's possible it was on Reverb, but I'm not sure. Transaction was last week of June. Apologies if it actually was the same one as in your cart.

Proteus - The 2020 natural korina ones are the only better looking ones than the transp. crimson, imo. Mine was used and with a couple tiny dings. $1350CAD all in including shipping from Japan. If you plan on acquiring one, plan also on buying a decent gig bag for it because the included one is a sad, sorry state of affairs.

Troy6120 - Bottom guitar is called a Jaguarillo. It's another odd bird because it's short scale with a HSS Strat config. It's MIM, from 2012. Colour options were 3-tone burst, Candy Apple Red, and Sonic Blue.

Hard to believe, but for only the 3rd time in 40+ years, I bought a brand new guitar:

Supposedly these are super limited, all Korina, chunky neck (yay) otherwise just like the one that ollkorrect beat me to a few weeks ago

Somehow I got to this point on life without a single P90-equipped guitar...problem solved.

Now I just have to wait for it to get here.

We here can be such bad influencers...nice guitar!

Fender Japan seems to do an amazing job sourcing some of their wood. I know Korina has a certain wow-factor, but I honestly like the look of their natural mahogany guitars better. Some of it looks Honduran, which should be impossible. Most of the 'nice' mahogany guitars these days are African, but I swear some of them sure do look like Honduras mahogany.

Beautiful guitar, Rhythmisking! Congratulations. I read somewhere that those korina ones number in the 250 range.

Those are nice guitars, ollkorrect, and congrats on the new P-90 equipped one! I've never had a guitar with P-90's, but I sure would like to! I'm liking the looks of yours, it's got me Gassing!

I'm kind curious what sort of P90's these are. The Aerodyne Tele's used the Fender "Black Dove" P90 pickups...these sound different to me from those, at least as I remember (I don't have my Aerodyne Tele anymore), but nothing anywhere says "Black Dove" for these guitars.

Fender Japan has also used Duncan P90's in the past.

I haven't been able to find any info on the interwebs about which sort of pickups these are or where they're made, but they do sound pretty good.