I'm with Powdog on Yamaha!

I have a westerly--it is mega stable, has a big sound and works great on stage. For now I can't knock it.

A few years ago I did extensive research into reasonably priced acoustics --- musta played a couple three dozen different ones. I think this one (Epiphone Masterbilt DR500CE) checks all the boxes:

My budget was about $500, so I ended up with a Seagull Entourage with cedar top and am still very happy with it, but had I been able to afford a little more, I would have gone Masterbilt.

I like the Masterbilt as well, and the Entourage with spruce top is under consideration. They're still liking the Breedlove - and no one here has had any opinion about it.

I like the Masterbilt as well, and the Entourage with spruce top is under consideration. They're still liking the Breedlove - and no one here has had any opinion about it.

I played a couple of Breedloves, and ruled them out because a) they sounded overly trebly played acoustically and I prefer rounderricherwarmer, and b) They seemed more generic and basic for comparable dollars to other makes that had more personality.

they sounded overly trebly played acoustically and I prefer rounderricherwarmer,

Yep, I began to gather that from some of the other forums I searched. They were blamed for sounding "new agey" (which was meaningless to me, as I didn't know there was a new age guitar tone) and Taylory. Which is out out out.

Thanks for the reliable confirmation.

A Larrivee OMV-03 would be another great choice. 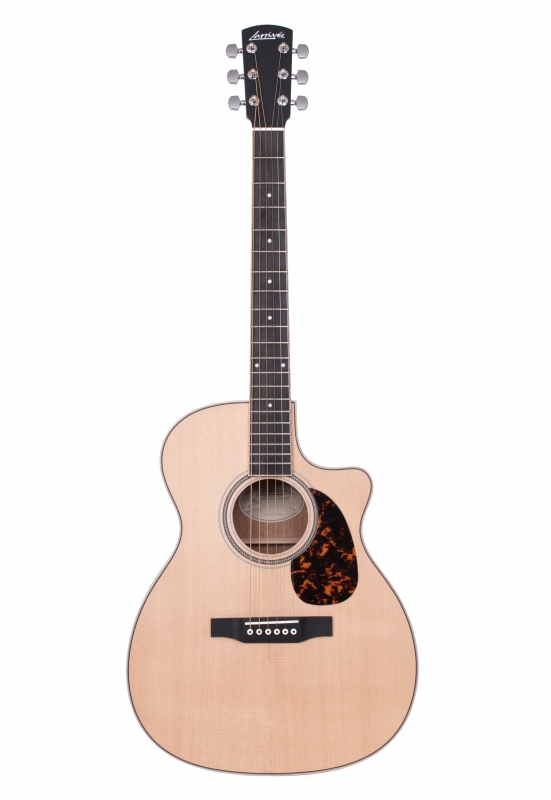 The only name I see missing here is Alvarez. Plenty of options and the higher-end (relative to the entire brand) models are pretty nice. I've a hankerin' for one of their baritone acoustics, which at $399 MAP are not high-end at all. But I've also got a hankerin' for their crossover nylon-string, so no purchases have been or will be made anytime soon. Anyway, they've got plenty of non-dread, non-jumbo, non-cedar, cutaway acoustic-electrics that top out at $2,499 MSRP.

Liked the suggestion of the Guild F47RCE. That was going to be my new guitar 18 years ago before I discovered RainSong. Eastmans are also a good choice, an incredible value.

I'm an old Alvarez/Yairi apologist, and I trawled their lines. For whatever reason, nothing seemed to hit the sweet spot.

I have an Alvarez-Veillette AV2SB baritone from the 90s, and it's a killer box. Action has gotten pretty high, and it either needs attention or replacement. But it sounds phenomenal. It was a collaboration with Joe Veillette - who now has his own line which shares the same styling. Unusual, and I like it. But his guitars are crazy expensive.

It's looking like the leaders are the Larrivees, the Eastman, the Epi, or one of the Guilds.

The Godin family makes excellent guitars in this price range. Seagull has been mentioned but don’t forget Simon and Patrick or the more entry level Art and Lutherie. All incredible value.

But if you’re getting up to $1000, I’d also recommend the Larrivees. The OMV above is good, but I’d go with the L shape first. It’s a unique design from Jean L’arrivée. Because sits between an OM and Dreadnaught it is really a jack of all trades.

If your friend wants to save a few bucks look for a Guild GAD40ce. Import from China but excellent build, sound and playability. Plus all solid woods, bone nut and saddle. Cutaway, solid spruce top, pickup and fun. Probably pick a very good used one up for $400 - $500. Here is a pic of mine.

And there are the new Westerly's (Imports but again they check off most of your requirements) Maybe the OM-140ce. https://guildguitars.com/g/...

I believe that this may check off most boxes for you:

My westerly trounced the masterbuilts I tried. And the yamahas. And the tailors, etc. There was nothing remotely close to it at that price range. Also, plugged in it has continued to trounce. Crazy good for the money.

I hate to say it but the PRS Angelus SE line is good value for money. The ones I've heard and played were very good.