Retnev- Except for being a doublecut, the '61 Vega solidbody you linked to is identical to my friend Doug's.His was a singlecut. If I had a pic I'd post it.

That neck joint is dead on for an early premier guitar. See here:

both built by United guitar. They stopped using that neck joint around 1958. Perhaps SB has something to do with Sorkin who founded Premier? It matches the early features of Premier and he was buying parts off of Gibson (you could buy their archtops with gibson made TOM bridges). From having seen inside one that silver braided wire is what they used as well. You can see it on this listing:

General shape is very similar to the first Premier - particularly the horn shape. Same headstock and tuners as the Marvel as well? Same tailpiece as the Premier as well (except longer).

I learned from an earlier post that United Guitars were made by Code-United out of New Jersey, I had a hollow body from Roughly the same era. Mine was an Orpheum , although I understood that CU made guitars for Premiere, Orpheum, Paramount and Vega and a few others. The Vega connection looks strong .Mine had a round metal medallion with the brand name glued to the headstock. Maybe that’s an Franz pickup with a different cover, lots of their Guitars had them. Not much info Out there on the Code/United group to be found unfortunately. Nice Guitar

Definitely has the feel of those guitars, I can see what you mean. Also Walnut looking woods. Neck joint indeed shaped exactly the same on some of those guitars I found searching further. Cannot be coincidence. I think you at least narrowed it down somewhat. Thank you very much for the great info. Lots of digging to do. Those are some serious obscure brands I didnt even know about. Exactly the info I was looking for. I will look into the pickup. I am pretty sure it is a P13 though. The baseplate is exact to several P13s of a specific time.

Destol, I found a larger image of the Premier guitar you posted a link to. Quite a looker. Pretty! Link

and this; Check the Es-5 Tailpiece on this one. Link

These premiers can get really interesting. I dont even think Gretsch's wild glitters can outdo this monster. This was something new for me.

Thank you both very much.

They were definitely capable of doing very wacky things - the necks on the scroll guitars were made of solid rosewood for some reason.

That particular one that you've linked to is now owned by Ry Cooder: 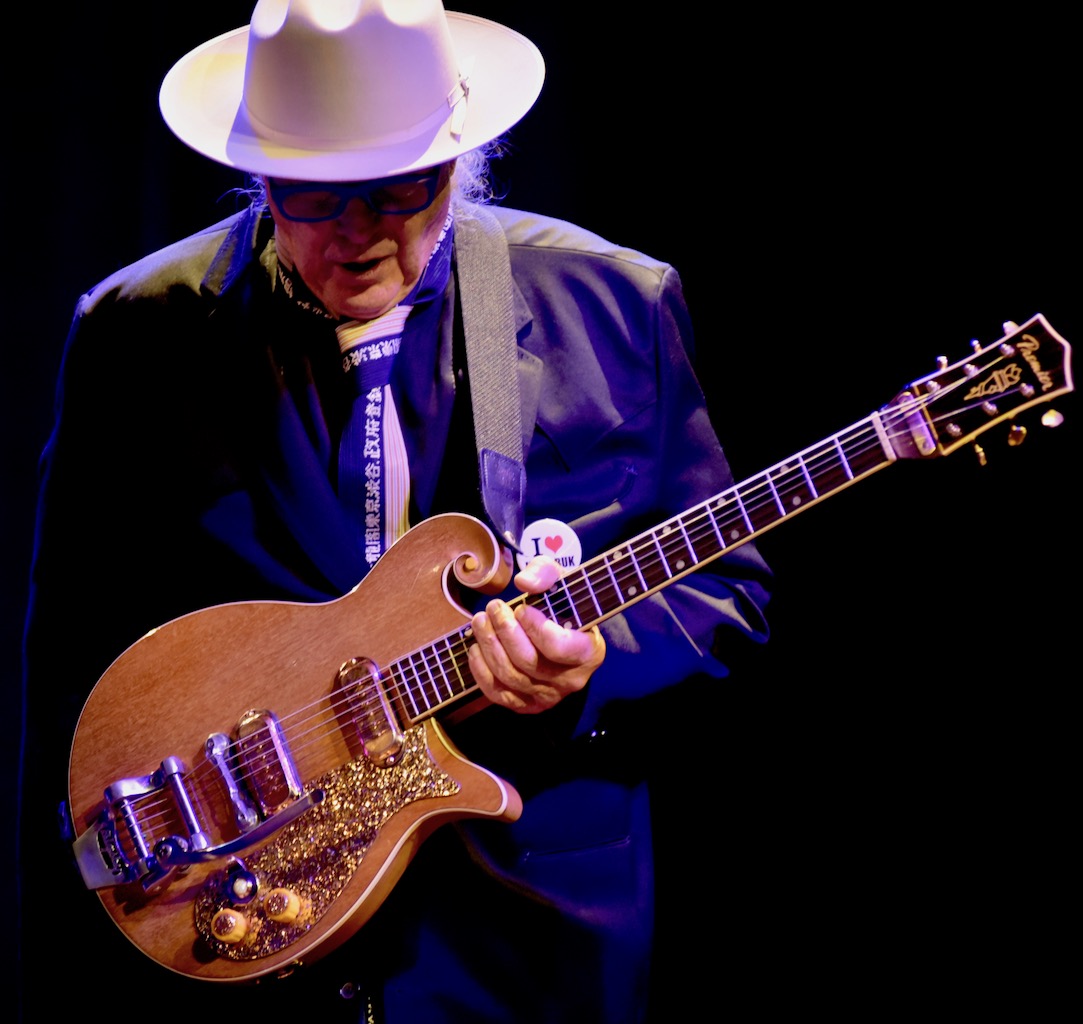 He's also been playing a 1 pickup Premier Bantam on tour, and from this video he seems to have modified a 1950s Gibson with those Franz pickups as well. Guess he really likes them!

See there he plays the Premier, and I knew nothing about one of my favorite guitarists playing a Premier before I started this thread. Ry's Coodercaster in the video with the Teisco neck and Oaho Steel bridge pickups is just a monster. My Coodercaster is not finished yet. Have all the original pickups but cannot figure what I want the strat to look like. Dont want to do the direct visual copy thing. The sound and pickup placement is identical, but I am not sure about color and look. I also have the correct neck he used. The Coodercaster is probably one of the meanest highly functional and distinctly iconic strats ever created. Decission like that I am not particularly efficient at. I will just leave it to my daughter to decide. She has an excellent fine-arts eye.

I found a half decent photo of the Gibson I was talking about: 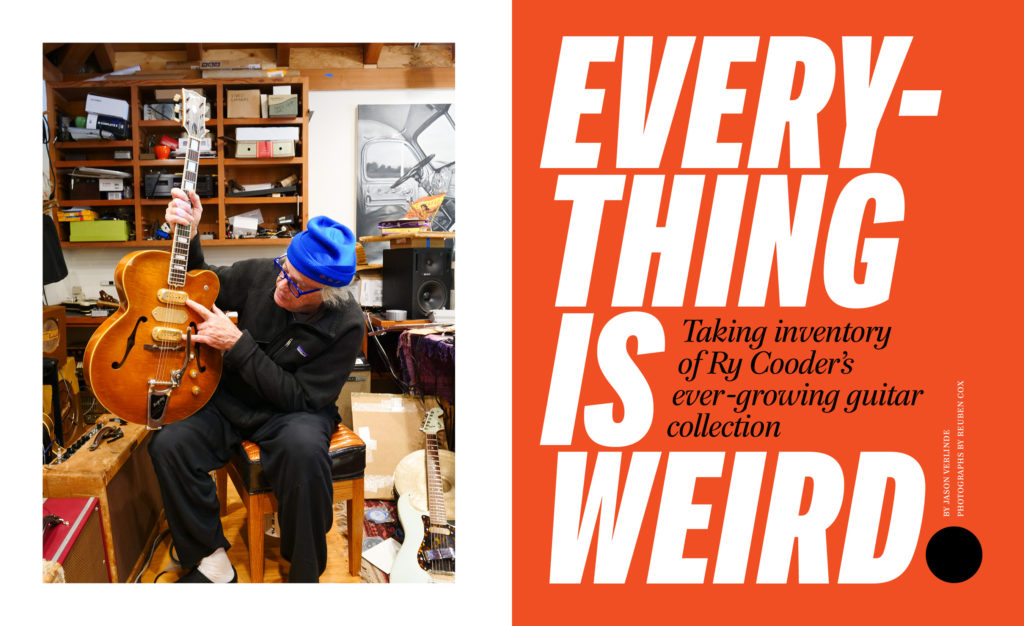 He's put the premier sparkle knobs and switch selector on it as well.

It's actually a two pickup model.

Where were the "cooder everything is weird" article published ? Cannot find reference to it. Will be one hell of a read.

Premier sounds great. Even a Premier amp too. Looks like 15". Cooder sounds like Cooder no matter what he plays.

It's from the fretboard journal:

I found this electra image. the neck joint carve is very similar to mine and the overall feel of the guitar is very close. Remove the tummy cut and make it a DC it would look almost identical. It seems to me that what I have is an early electra or whoever made it for electra. There are just too much coinciding. Since the Gibson P13 is not stock in mine obviously , the cavity has been altered and the cavity was clearly routed out on a large overhead router, I think this may be the best option yet. A very early Electra or different brand by manufacturer who made it for Electra. In this case it would be Matsumoku Japan.

Even the Cases coincide with what electra supplied. Here is an electra bass with what is the the same case as mine has, which seems to be Matsumoko. I will maybe have better luck looking at the case and find it's origin.

I don't think it's as old as you do. The tailpiece looks out of place, but it was a standard jobber part available anywhere for decades.

Everything suggests to me that it's mid-to-late 70s - and I agree it's possible that it originates from one of the factories St Louis Music used for Electra.

And there was a lot of variety and churn in what came out of those factories ust before and after the period Tom Presley became the SLM guitar project manager, and assumed responsibility for specs and coordination.

It's not, however, a slam-dunk either that the guitar comes from that axis, or that anything Electra is Matsumoku. For one thing, I don't recall seeing any neck joints exactly like your mystery guitar's - and I've seen many similar to the Electra image you post. (But both more and less tapered - making it possible yours represented a starting point for that evolution. Tom has told me about shaping those joints by hand on submitted prototypes, then sending them back for production.)

But I do agree that the shape of your neck joint could well be on the continuum from same-like-everyone's to Electra/Westone's more distinctive profile.

Also, prior to the early 80s, as many Electras were built by Kasuga as by Matsu. Maybe more. And a few models during a period of transition were made by both. If this guitar comes from that nexus, I'd think as likely to be Kasuga as Matsu.

In keeping with the discussion about some particular nameless guitars seeming both unique and extraordinary in their own right - and forming an almost mystical bond with a player - I'll mention my buddy Gregg (who has come to Roundups) and his Skylark guitar. Skylarks were a Matsumoku project, maybe '79 - '81 or so, the lore being that they were built for JC Penney and somehow escaped that channel.

There aren't many. The only ones I'm familiar with are Pauly double-cuts, neck-through construction, with several varieties of wood joined as wings (and part of the neck, I think). Always dual humbuckers, as I recall with phase and tap mini switches. Gregg's example came through the music store where I worked, and I think I recall selling it to him for around 300.00. (It was obvious that it was a great guitar, but none of us then were ready to fully accept that an unknown Japanese product could really be superior to Gibsons.)

Anyway - it's Gregg's number one, and has been ever since. I think it's been re-fretted once. Gregg is among the very best players I've ever heard, has had a variety of guitars, and could play anything. But he's found his life-long voice and companion in this Skylark. (A bit like Brian May and the Red Special, or - a closer analogy - Prince and his Tele "copy.")

Representative nice example shown in this old Reverb ad: https://reverb.com/au/item/.... Gregg's is red, but otherwise similar. Guy in this ad characterizes the guitar as a "shredder," which it most assuredly not a fair judgment. It will do that, but it's a wide-ranging instrument adaptable to anything you'd care to play.

I think we all get that when extraordinary instruments happen, there's something inexplicable in our connection with them.