I'm in Rhythmisking's camp on this. I could see using it for a few things but with what I play it would mostly sit in the box, BUT.....I love wide necks. I'd probably get it and just put 6 strings on it.

Now, there's a Guild 12 string acoustic that's got my interest though.

Being a teenager in the mid-60s, I grew up loving the 12 string sounds of the Beatles, the Byrds, the Beau Brummels, The Searchers, the Hollies, the Turtles, etc. I just learned of a group from that era that did not have nearly the success that they should have. I assume that they took their name from Chimes of Freedom, a Dylan song from the first Byrds album: Starry Eyed and Laughing. I gather that they are an English group and may have had some success over there. I prided myself on knowing obscure groups but never heard of these. Can someone tell me something about them?

I admire the precision of this band's vocals and their ability to re-create the sounds of The Byrds. However they have, for my taste, simply created a direct copy of The Byrds. I think I liked it better the first time around with the original band.

I seldom get very passionate about such things on a forum. This time is the genuine exception. I really feel like the Rickenbacker 12 string is getting a raw deal when it is dismissed as a one trick pony. Part of this unfortunately is the prominence of two players; George Harrison, and Roger McGuinn, in whose hands the Rickenbacker 12 did what it does so well.

But limiting the Rick 12 to The Chord in "A Hard Day's Night", or the chimey riff in "Mr. Tambourine Man" is similar in my mind to limiting the Gretsch 6120 to the twangy sound of "Rebel Rouser," or rockabilly and "Mystery Train," or country thumb picking on "Mr. Sandman."

And as far as "my fat fingers can't play chords on a Rickenbacker"....who said you had to form them just like Mel Bay taught us all how to do it? I have yet to read the caveat to the above statement "...and I even tried holding down two pairs of strings at once with my index or middle finger." This is a trick I learned from watching McGuinn. (And I don't have fat fingers.) It's also a neat trick to master when playing some jazz chords on a six string guitar. Heck, we all hold down two strings with one finger when playing the four string spelling of the F chord, right?

I think the guitar world needs to broaden its outlook a bit, be bolder, more experimental, and not locked into old stereotypes.

OK....I'm done with my rant. Back to our regular programming.

I've been working out alternate fingerings for Rickenbacker chords for decades - there's really no choice, if you hope to play it cleanly.

And I've never played a Byrds or a Harrison riff on mine; I use it for whatever I can make it sound good on. Of course it's versatile beyond that context - but it's still just one very distinctive 12-string voice among many available. (And like it or not, the reversed coursing marks the tone immediately, and calls up the 60s-jangle association - whether or not it limits the application, it does suggest one.)

I don't think it's really gotten a raw deal here: there are more Ric 12s in the GDP guitar census than any other kind.

i have never owned an electric 12-string...i figure i probably wouldn't use it enough to make it worthwhile. i am, however, considering adding a soundhole PU to my Alvarez jumbo 12-string acoustic so i can use it for textures on the recordings i'm preparing to do. i'm particularly interested in trying fuzz and other effects on a 12.

My original question of it being a one trick pony got shot down in quick order! I have some time to digest all the choices. If money was no option a Ric would be one of the top choices. The Reverend would be my first choice followed by a Dano but since I do live in Europe and they're so cheap I might have to give that Revelation some consideration.

If I could poke my head in one last time....

I personally ADORE Rickenbacker guitars as much as Gretsches. Both are absolutely their own thing. I have 5 Ricks and one more on order, a 660/12. Which brings me to my point...

Unfortunately, the degree of beauty in her sound is only matched by the degree of my absence of guitar skills. Thus, it’s difficult for me to play at this point (one thing that didn’t help was the spacing that occurred out of necessity when the luthier cut the saddles for the 12-saddle bridge. He had to split atoms.)

BUT....knowing my 660/6’s wider neck, the 660/12 will be exactly what the doctor ordered. No, it’s not hollow but that’s ok. I LOVE my 5422/12 too so if I GOTTA have hollow, it’ll certainly do. In fact, it records extremely well for making the same point but in its own Gretschy way. And the neck’s wider.

Thanks for enduring my diatribe.

I wanted to love the 660-12. I anticipated it would be my ultimate and final solution. But no.

I'd still love to find a sound I can't do without in the 620/660 cresting wave body; it's the prettiest of the Rickenbacker guitars for my taste. The disappointment that I haven't disappoints me every time I disappointingly think of it.

It wasn't just the tone.

The neck was wider, as devoutly expected, and that was good. But, annoyingly, it felt clubby to me. It didn't seem as thin in front-to-back section as the 360's. (And I don't mean I was annoyed by Rickenbacker. Who cares about that. I mean the entire Rickenbacker cheering section should be annoyed and disgusted by my response, like "OK, we produce a wider neck and then he complains about its THICKNESS?")

The tone sealed its doom. It was just a little harder and clang-ier than the 360. Not a bad tone at all - in fact a very good and entirely useful tone. Just different from the 360. Not as rich, resonant, airy, kissed with complex overtones. But not at all dramatically different. Just enough.

Had my plan been to have two Ric 12-strings (as Ric12string has two amps, so why isn't the name Ric2Execs?), I would have been happy. But my GAS rationalization to justify the acquisition was that the 660 would replace the 360 and be all the Ric 12-string I ever needed. (Nother words, I'd sell the 360 to fund the 660.) But the combination of the two factors taught me the 360 - skinny neck notwithstanding - is the Ric 12 for me.

Unless John Hall comes up with a chambered 660 with a neck wider than the 360, but with the same front-to-back feel. (And, I ask you, what sense does a chambered body on a neck-through guitar make? None, I answer myself. None at all.)

I hold Rickenbacker entirely blameless for my dissatisfaction. It's me, I'm the problem. 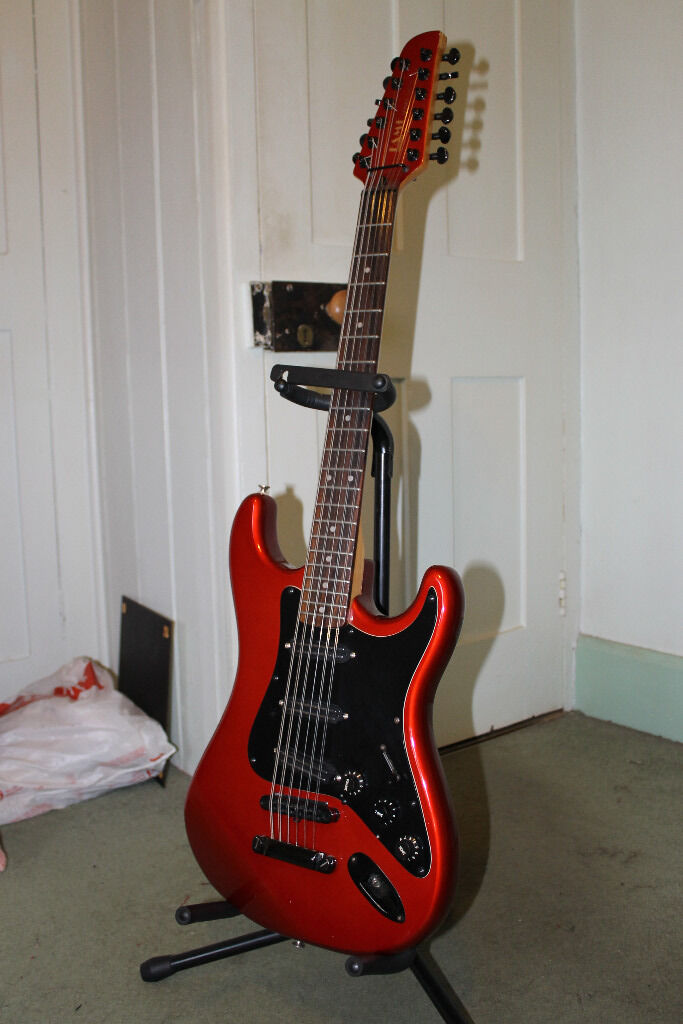 Proteus, I was gonna suggest the 1993 Plus to ya but the neck has 660 dimensions.

Proteus, I was gonna suggest the 1993 Plus to ya but the neck has 660 dimensions.

I read a Rick employee citing them as having 660 neck dimensions.

So how is the playability effected by a longer scale? I see a few with the 25.5 scale.

I've got around 5-6 electric 12-strings. I forget which ones, but I'll take a few pictures.

I love them, but currently, I'm mostly acoustic, and I use my acoustic 12s.

Addendum: None is a Rickenbacker.

Is your last name Mcguinn?

Mine is a Sanatoga JT Hawk 12. The body is light --- not sure if it's solid alder or perhaps chambered --- which makes it a little neck-heavy, but otherwise it's comfortable to play. The neck is a little wider than most, and the tone is very Ric-ish.

It does everything I need a 12-string electric to do, but the Gretsch 5422-12 is also very tempting, as is the Epiphone Elitist Riviera 12 string. If I should stumble across a good deal on either, I'd be hard-pressed to say no.

I had a Jay Turser JT12 Hawk and really wish I had not sold it. It had a nice beefy wide(ish) neck and coil split that got quite jangly. This one I regret selling. This (above in red) is like the one I sold.

I now own a Harley Benton (from Thomann in Germany) Ric a like 12 that has a nice chunky neck and sounds very 60ish (is that a thing?) but the tailpiece is a PIA to change strings.

Here is my Harley Benton... 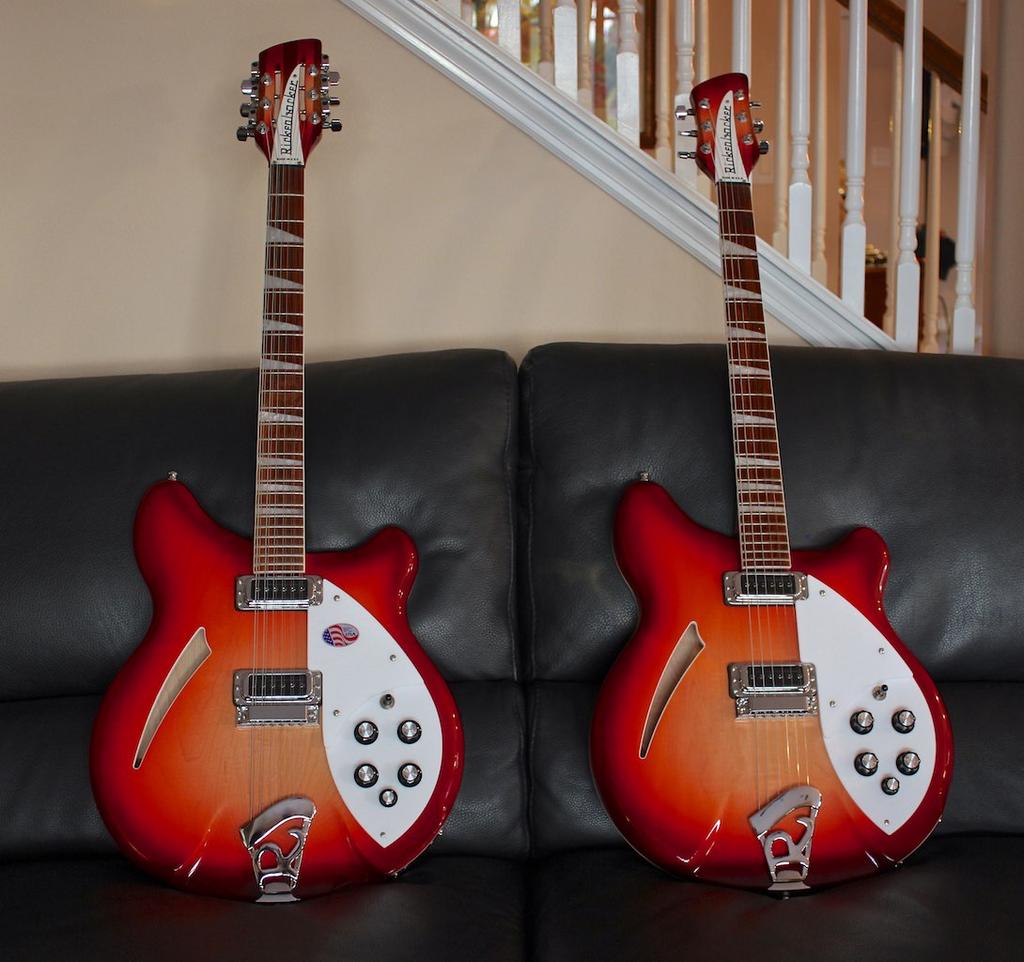 Any guitar can be your go-to guitar if you love it, or a 1 trick pony if you don't !

12 string guitars are no different than 6 string guitars, banjos, mandolins, or any other stringed instrument. They get your interest because of your love of the sound, or your passion or desire for difference, or whatever moves you. And your use becomes the show of your passion.

I started learning guitar on a 12 string acoustic. Why? Because, to me, the sound was like comparing a solo singer to a choir, or a violin as compared to an orchestra. I used my 12 string as my main guitar. I loved the sound, and my imagination and passion told me a 12 string in ANY song sounded what I imagined the sound could be. That's also why I find it humors me when someone asks what songs can you play with a 12 string? It probably parallels with my preference of music and musicians. I've always loved song by the Beach Boys & the Moody Blues, to name a few. Because when I heard their music, I didn't hear the tune, I heard all the vocals working together as one! That sound that no single vocalist could do on their own. That group of voices that could stand on their own merit without any help. I guess my 12 string feels the same way to me.

Don Birchett (can I still call you Chet T-Bird every now and again?) and Jim Krause, what a top tip- Starry Eyed and Laughing.

I had never heard of this group before but my goodness, they can Rutle the heck out of the Byrds. And just like Neil Innes, every now and then they come up with a song that very nearly eclipses the the band they are shadowing, putting a bit of shade in the opposite direction.

I'm always grateful for the great music that is shared here, among many other positives. A salute to you both on this occasion.

I have one of those Revelations that Dave K has. I got one one his recommendation. It's the first 12 string I've ever had- it gets played at shows, recorded, used as a writing tool. Because the instrument forces you to play in a different way from a six-stringer, it is an extremely useful creative catalyst, breaking through writing blocks with inspirational chime.