If it does what it says on the tin it’s not snake oil I guess. There’s a fuzz out now that uses a plasma coil, too. Neat stuff.

But for reverb it seems like a lot to have to dial in every time you change the room you’re playing in.

Now, is it better enough to be worth it? No idea.

It's not snake-oil - Gamechanger is doing something new, unique, and different - but I don't think it's better than other spring 'verbs, and it's not going to be any spring reverb purist's dream pedal either.

And I don't think it's a breakthrough - just another in Gamechanger's entertaining series of electro-mechanical sonic devices from a retro-future.

Listen to the demo with headphones - without watching at the same time. Otherwise, the lights in the reverb tank will seduce you.

The whole idea of the pedal is novel, and some of the effects (pulsing the optic receivers on and off for verbrato, cycling them for some distant vague version of harmonic tremelo) are interesting. But to my ear it's not compelling enough sonically to make it a must-have.

Mechanically and aesthetically, though, it's killer. It might be worth having just for the general space-age steampunk'd mad science vibe.

This is what Gamechanger specializes in: actual mechanical or electrical functionality that does something physical - and that you can usually see - to process your sound. The design and build quality are second to none. They're like artifacts from a parallel history.

I have the Plus (piano sustain pedal used to seamlessly sample, loop, and sustain input) and the Plasma (brutally edgy sputtering fuzz created with xenon gas excited into the plasma state by 3500 volts of internal juice). Both feel like heirloom treasures, and both are a blast to use - but the Plus is more widely useful, as the Plasma's fuzz looks better (in its xenon tube) than it sounds. Or, rather, it sounds fabulous - for that one thing it does.

I applaud the team's vision, aesthetics, and determination to merge raw visible physics into guitar devices that are as visceral and physical as the guitar itself. At NAMM 2019 they showed prototypes of the Motor pedal and synth - with actual tiny whirring motors as sound sources - and I was hoping that pedal would be ready this year. No sign of it, though, and instead this Light Pedal surprise.

I'm tempted, but not quite smitten by it. For one, spring reverb isn't my favorite; for two, what they've done is ingenious but just not different-enough sounding for me to go there. I don't think they'll attract spring reverb fanatics with it (it doesn't sound purely drip-spring enough), and I'm not sure sonic explorers will find the tones interesting enough.

I find it academically interesting to hear details of how a vibrating spring sounds at various places along its length, and I don't think the pedal sounds just like anything else - it is unique - but the inherent wiry spring sonority in the end just doesn't light me up. So to speak.

I can imagine a day 20 years hence, though, when a full collection of Gamechanger's Menagerie of Devices will be a thing to have.

And while we're discussing them, there's a killer new version of the Plasma pedal developed with Jack White. Great graphic of Tesla's Wardenclyffe Tower transmitter on it. Makes me really want it, even though I already have a Plasma pedal.

I love the looks of that Plasma. I'm sure it sounds great, and having a cool pedal to look at on your board is, ya know, cool and all. We guitar players love gadgets!!

Watched the YouTube video for this and they use frickin lazers beams.... if the pedal had frickin lazer beams I’d be all over it! The Dr. Evil of pedals! But it’s just the dim glow of plasma.

Wasn’t the Back To The Future DeLoren powered by one of these?

I’m keen on trying it. I too have the Plus pedal which is a really great piece. Less enamoured with the Plasma pedals. While I am not averse to spending way too much on funky gear I couldn’t justify the cost of the one sound fuzz (IMHO) I bought a ZVex Fuzz Probe way back and found it was a lot of bang for the buck in the crazy over the top fuzz category. I’m hoping the new Reverb pedal will have a couple of songs in it. I like their style , those crazy Latvians!

Aah, Jack White territory. I like that degree of f'd upness, but don't need it much.

Reverb is the only effect that I really care about. I am very tempted.

No problem for me. The stereotypical sproingy drippy Fender outboard tank surf sound has never been my thing.

I love the looks of that Plasma. I'm sure it sounds great, and having a cool pedal to look at on your board is, ya know, cool and all. We guitar players love gadgets!!

I'll get out the old lava lamp if I need to stare at something! Lol

I just listened to the demo and heard a few pretty cool sounds, but I can't stand having to send money for something that is going to take 4 months to receive!

Yeah, I might cave and order one if I didn't have to pay till it's ready to ship (as it works with Analog Man and other builders who pre-sell). I'm always quicker to spend money I imagine I'll have in the future than money I know I have today.

I'm guessing Gamechanger is trying to raise a pile of capital, either to continue with production on this pedal, or to defray ongoing expenses for the long development of the Motor Synth (which isn't ready to ship yet either). Or both, I guess.

The marketing does seem rather cynical. The video was very style over substance.

I had a chance to try it at NAMM. Impressive, with a wide range of tones. Being a surf-nik, I was interested to see if it can drip, which it can, along with a wide variety of other reverb types. That being said, I'll stick to my Fender 6G15 and Surfy Bear tanks. If I didn't have either of those and somehow they weren't available to replace, I'd definitely consider one of these.

Well, or maybe not.

I'm either spoiled for reverb (which is likely, as I have mumblemumble waytoomanyverbs) or the demo Gamechanger has posted is a bad representation of the Light Pedal.

I listened again (phones, not looking at the pretty lights), and while I'm attracted to the trem and reflect modes, and the gate/duck rotary envelope control (a really good idea)...the underlying character is just all sproing quank to my ear. And not in a good way.

But Mel, you've got a good ear for 'verb. Did it sound better when you heard it than the demo sounds?

(And is it just me, or does anyone think there's a common practice of using out-of-tune guitars and unexceptional playing in demos, perhaps so as not to intimidate buyers?)

Prot, mainly I heard an absolute wall of reverb, because the Gamechanger folks wanted to show off the extreme ends of what the pedal can do, but when they were distracted I was able to dial in more subtle/usable levels of reverb. For my purposes, the added features and range of reverbs don't add anything since I basically want a more portable version of a 6G15.

Since I was at the Surfy Industries booth all weekend (they're carrying my "Drip Switch" pedal now) I had plenty of time to play around with a reverb pedal that does excite me, the new Surfy Bear Compact, which uses a 9" three spring pan and fits on a pedal board. They added a Decay control which lets you get a tone like the standard 17" two spring pan, so all the drip without the bulk. Also, the Compact features two mix levels and a true bypass, which is almost as versatile as my Drip Switch mix level controller.

As for out-of-tune/unexceptionally performed demos, guilty as charged. ;)

I am a spring reverb purist. No pedal without an actual spring has ever nailed the sound, although the TC Electronics Nova Reverb and the Topanga pedal are very close. Real springs make the Surfy Bear, Billy Z's Kahuna, and the VanAmps Sole-Mate and Sole-Mate Jr sound right to these ears. The built-in SS 'verb in Quilter amps is very good, but maybe only a 93 on a scale of 1 to 100.

Other reverbs are fun, but I need that all-cotton, free-range, grass-fed reverb for what I do. YMMV!

Sticking with my old tank.

they beat me to it w the tiny spring pan.. oh well I'm still cranking F-Bomb reverbs out.

Too many knobs. I don’t have time for that.

Yeah, I might cave and order one if I didn't have to pay till it's ready to ship (as it works with Analog Man and other builders who pre-sell). I'm always quicker to spend money I imagine I'll have in the future than money I know I have today.

I'm guessing Gamechanger is trying to raise a pile of capital, either to continue with production on this pedal, or to defray ongoing expenses for the long development of the Motor Synth (which isn't ready to ship yet either). Or both, I guess.

If I didn't have this 'verb that a friend built for me, a dead-nuts Fender replica (electronically speaking), I would probably open the purse strings a little easier for the game changer... 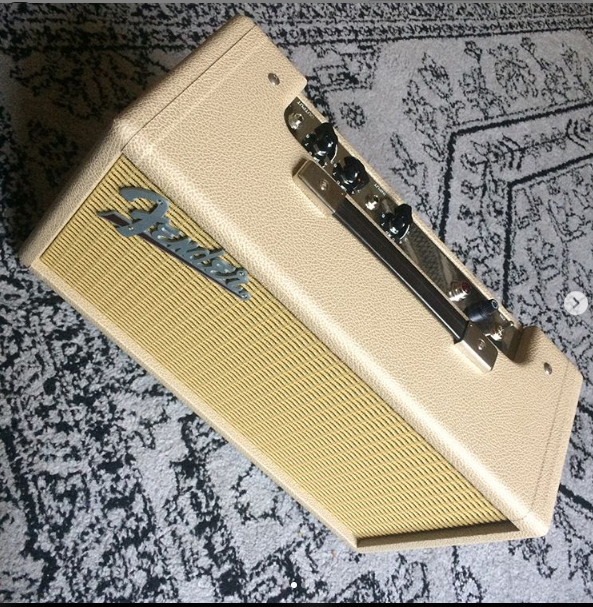 I also have a sh*tload of verb pedals hanging around

I built a version of the Revibe . It has the brown Fender vibrato along with the traditional tube reverb. I am really pleased with the tone. The preamp boost tone you get is fantastic(not huge gain, just a sweet bump in volume and warmth).Obviously not as portable as a pedal but the tone and feel totally justify the effort to lug it along to gigs.