Wow... My head is still spinning; just can't believe my luck. After some bargaining and haggling, I made a package deal purchase on THREE 1940's era Gretsch instruments. Not only that-- they are all virtually unplayed-- "New old stock" you might say. And the icing on the cake is that each one of them included the ORIGINAL case, AND "case candy"!

Every one was made at the factory in Brooklyn, and although two are identical, I just couldn't pass up the deal.

Anyway, the FedEx guy just left a while ago, and I eagerly tore into the packaging like a kid at Christmas... and what I found far and away exceeded my expectations.

I also snagged a FOURTH vintage Gretsch from a different dealer on the same day-- and this one is from the early 1950's. It also arrived today, and while not necessarily "NOS" like the others, it IS virtually unplayed and in pristine condition. It also came with it's original case and "case candy". However, this Gretsch was not made in Brooklyn, but in Ste. Croix, Switzerland. Yes, that's right, Switzerland. 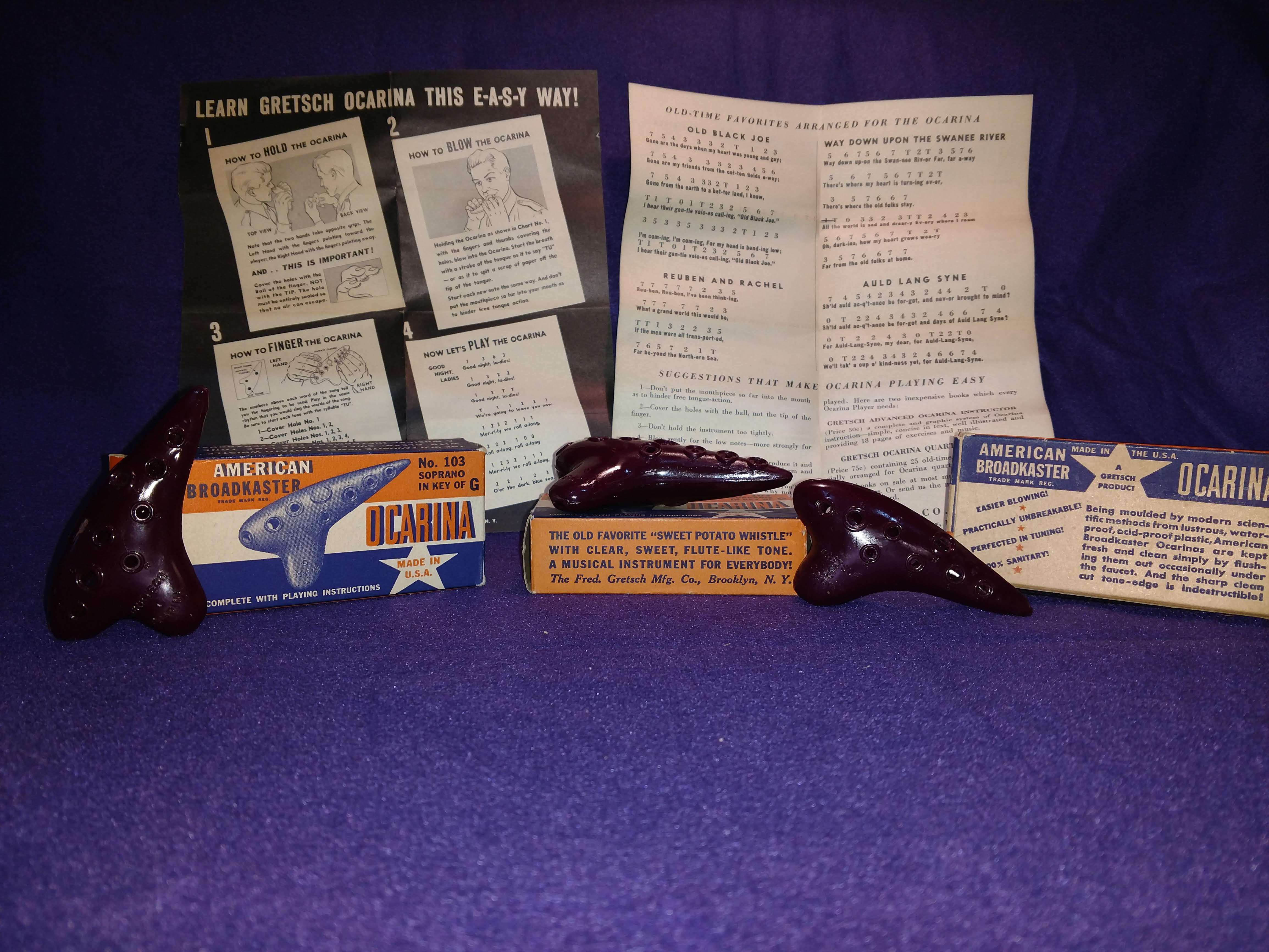 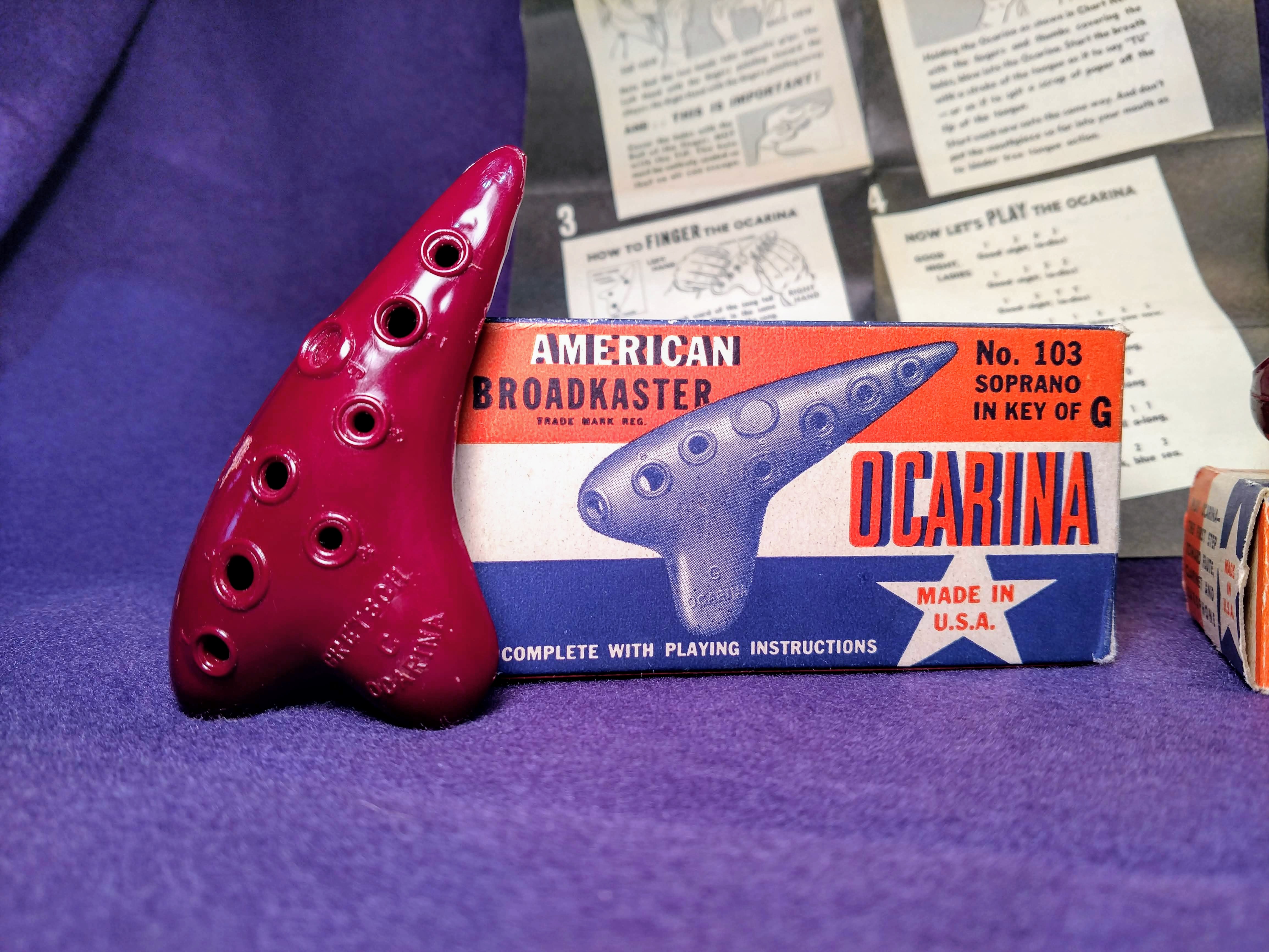 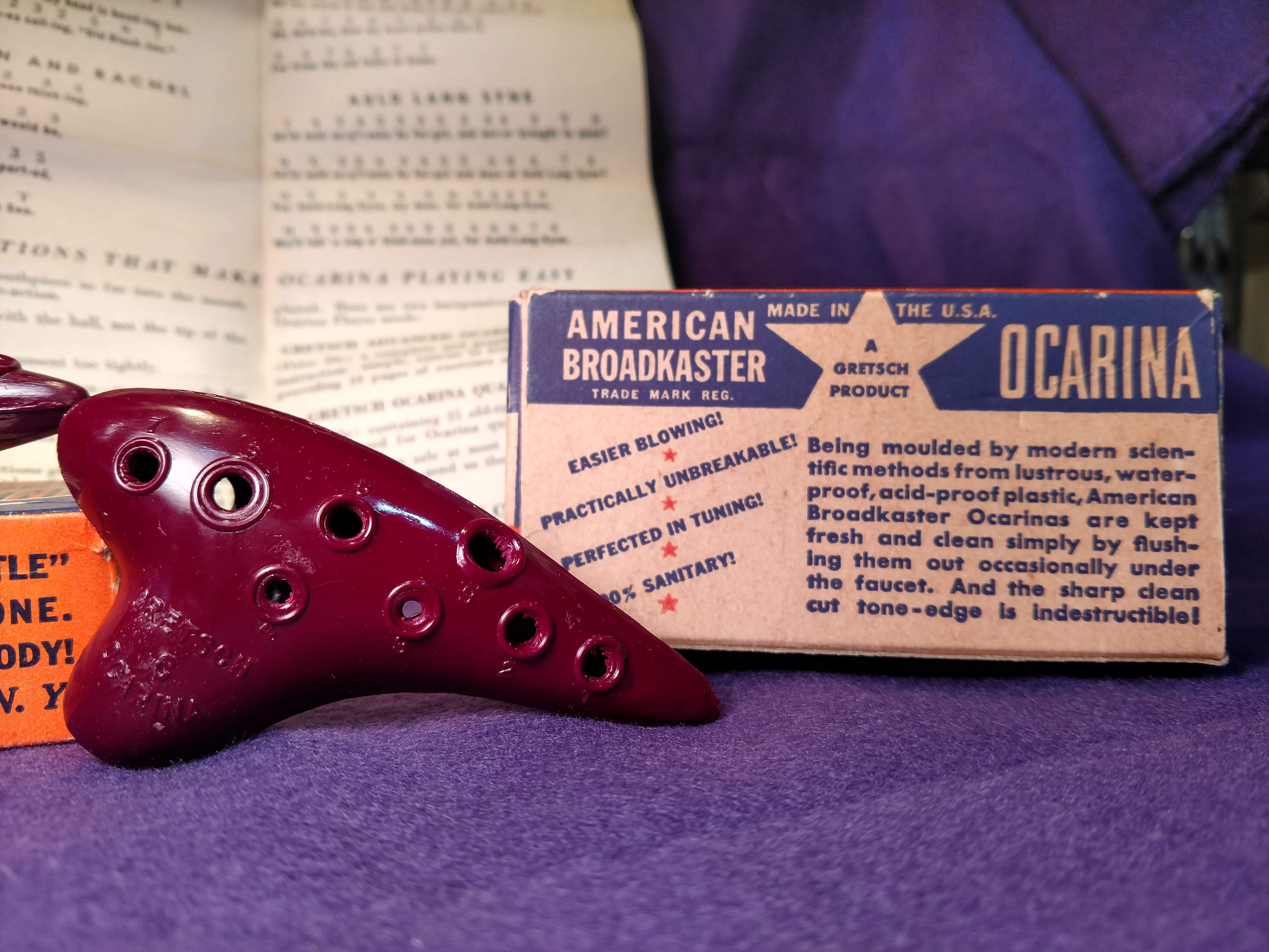 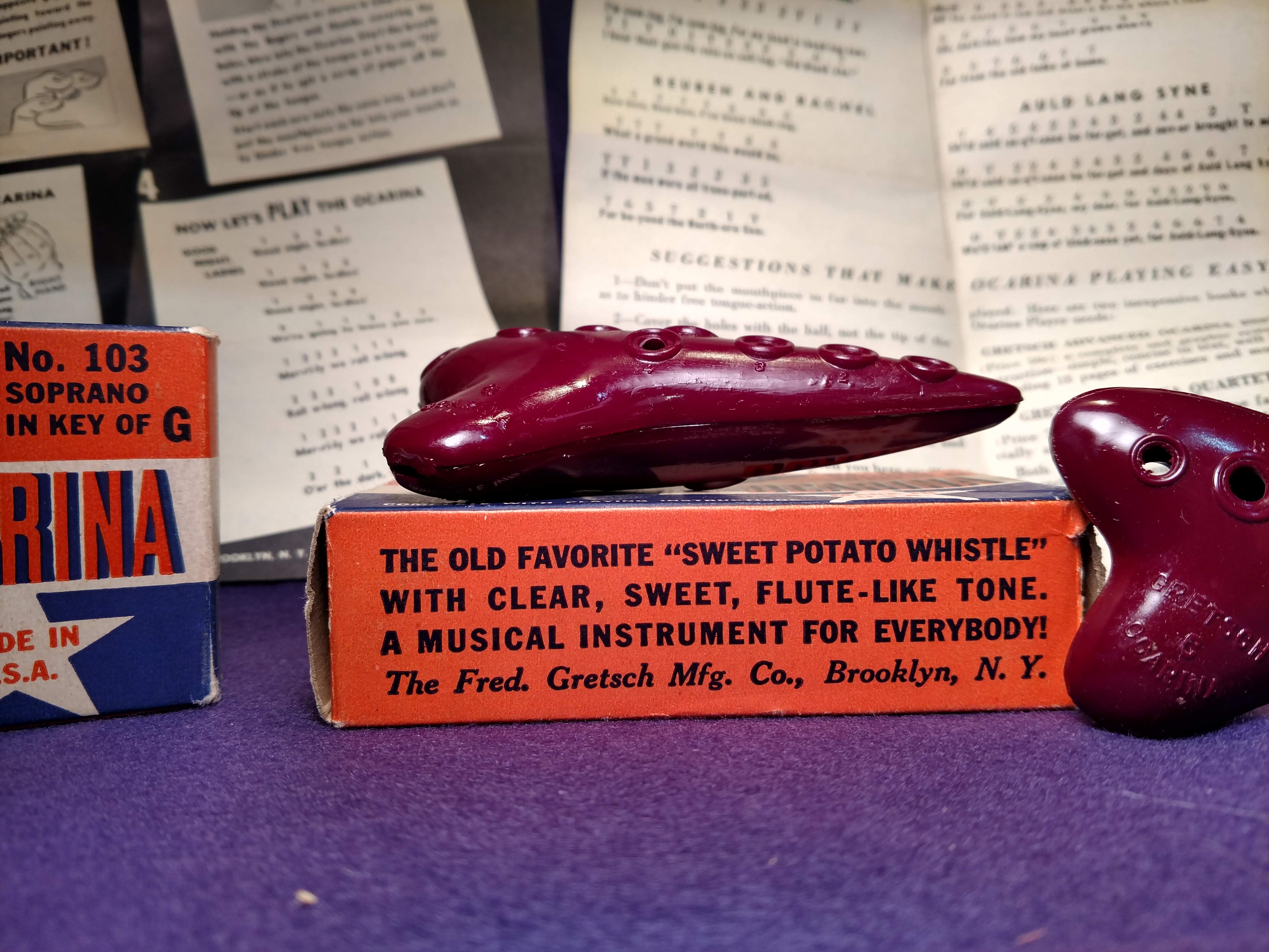 And the "case candy" contained within each case! 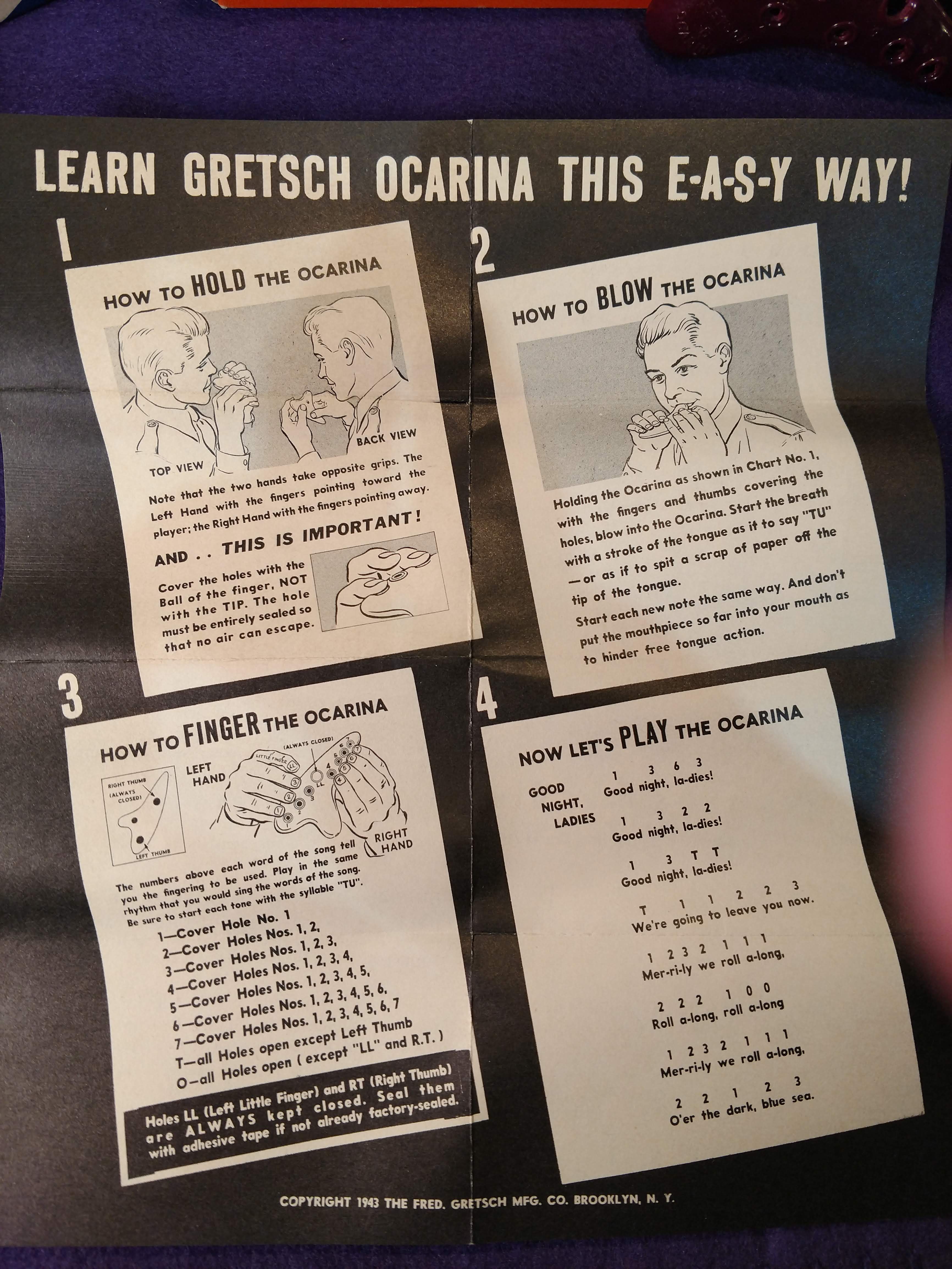 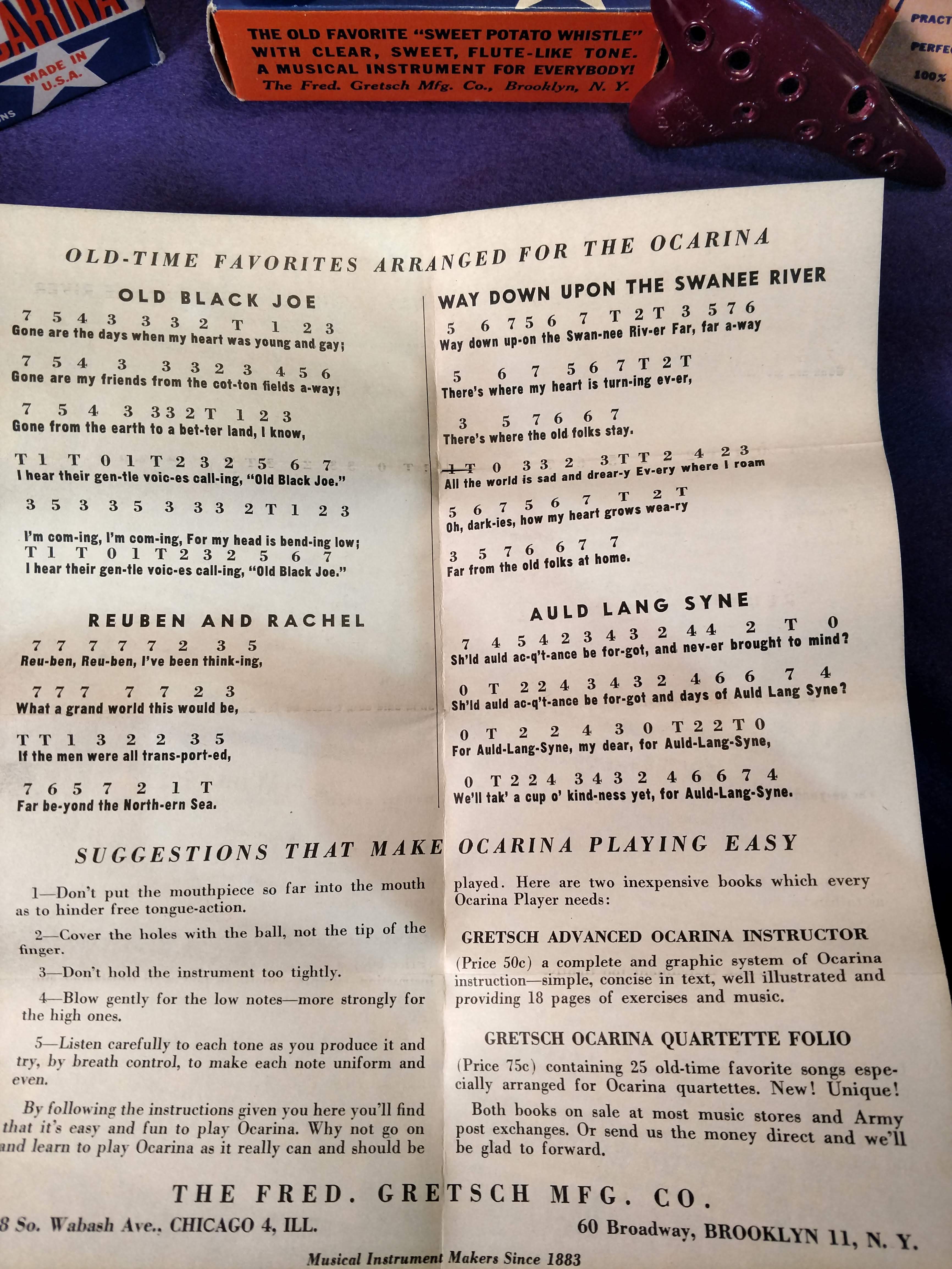 Now if that's not a beautiful sight, I don't know what is! There are two soprano "C" models, and one soprano "G" model. Each is expertly machined from pre-space-age bakelite, with precision finger-holes meticulously crafted by a punch machine. And each has never been played!

Now, the icing on the cake-- a truly beautiful piece of musical handiwork. I haven't placed the exact build year on this, but I do know that it was precision-made in the very early 1950's by Swiss craftsmen-- you know, the ones that are so good at making watches & things? Anyway, This instrument proudly bears the GRETSCH name, but was actually crafted by the THORENS firm for Gretsch. Yes, that's right-- the same Thorens firm that builds high-end stereo equipment.

So in all it's pristine glory, I give you the Gretsch 10-hole Chromatic Harmonica! 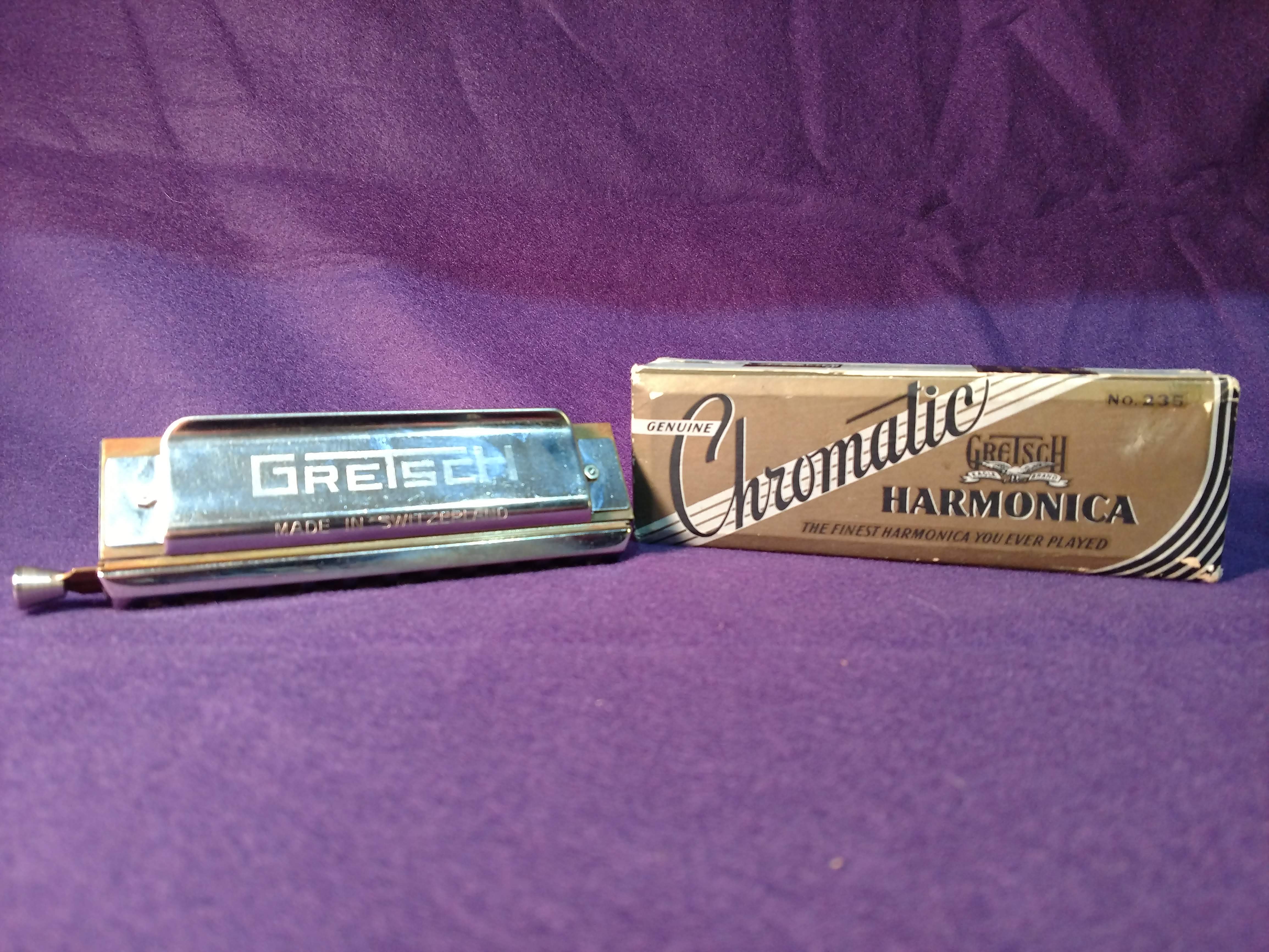 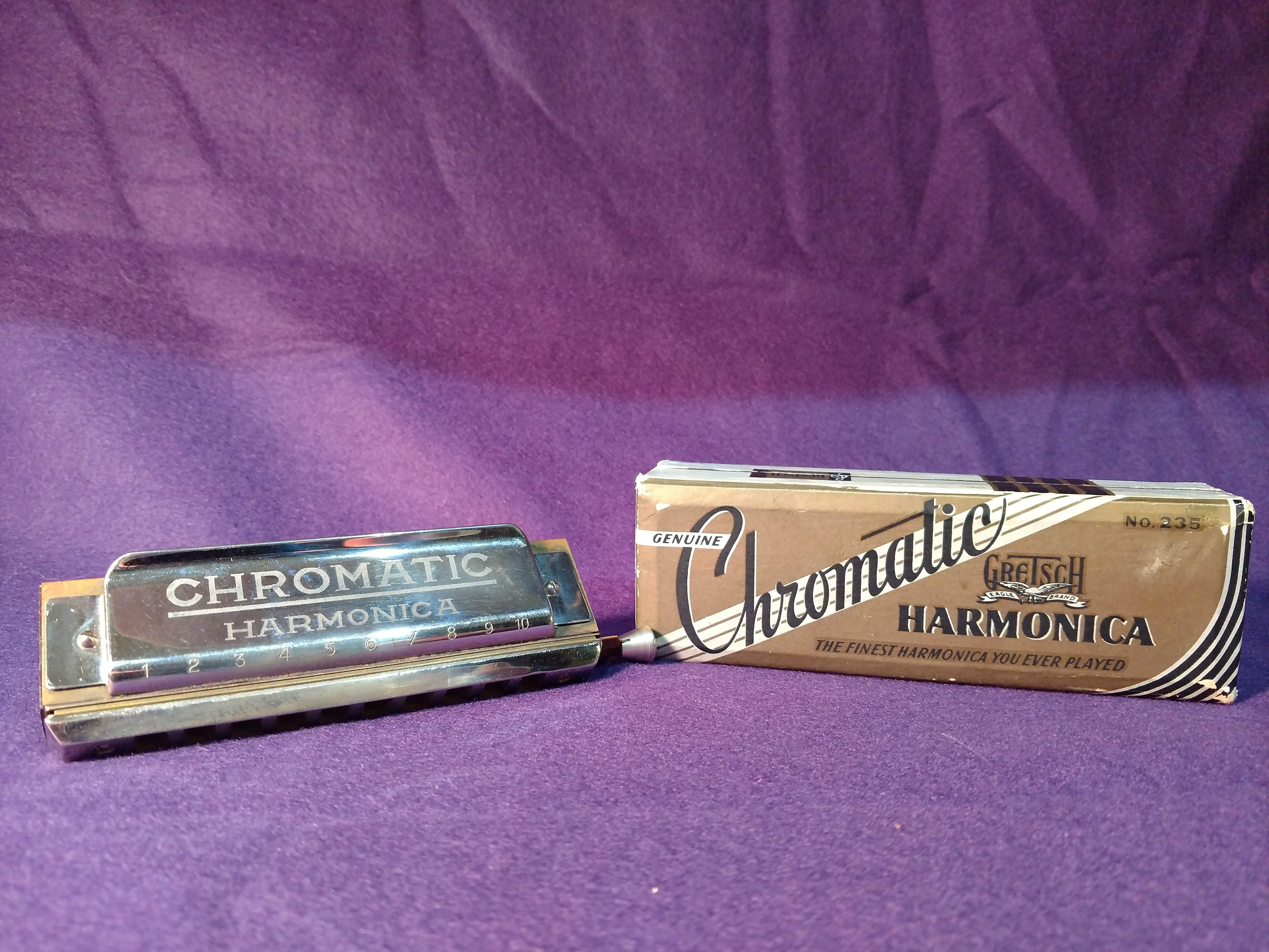 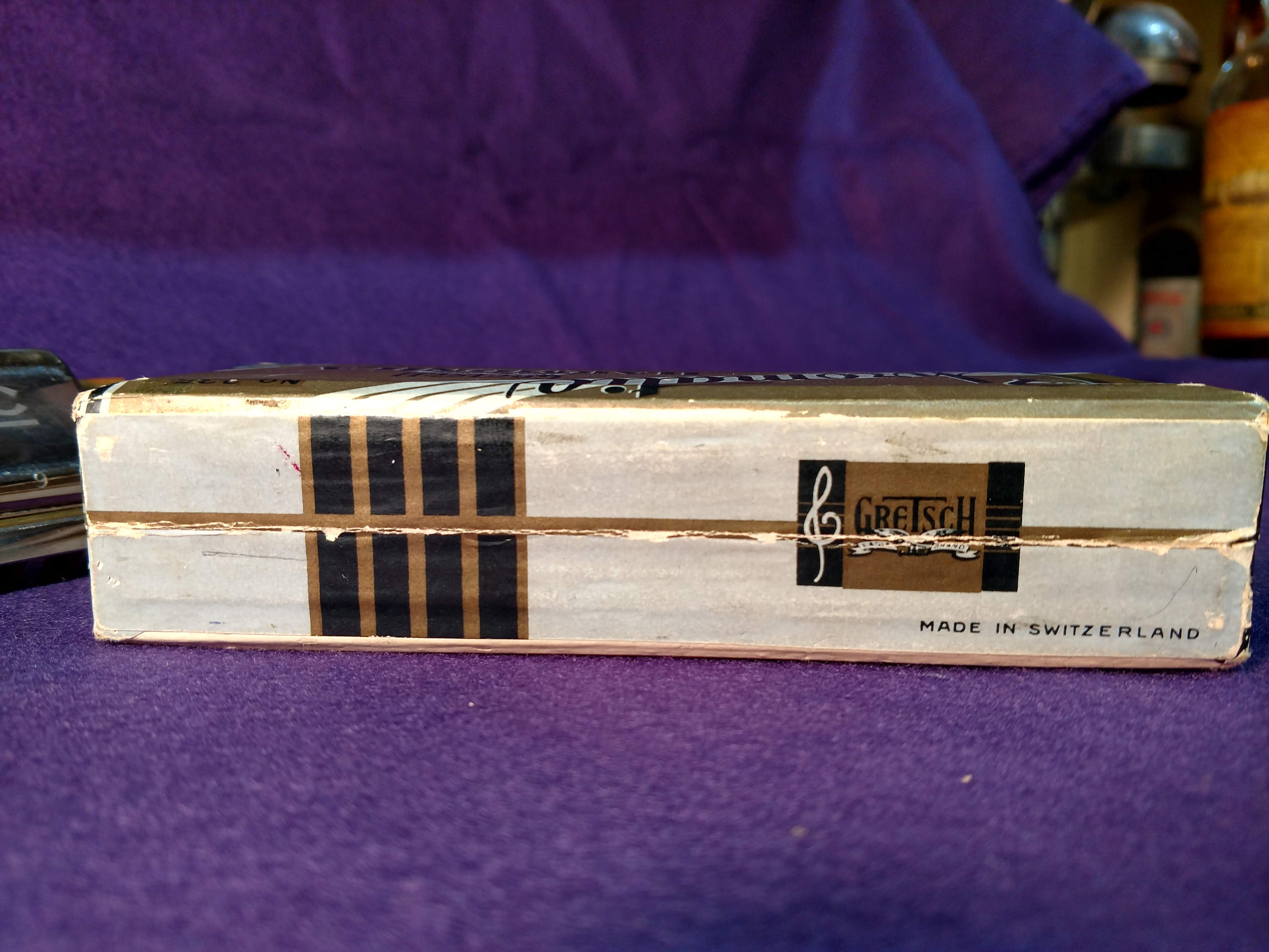 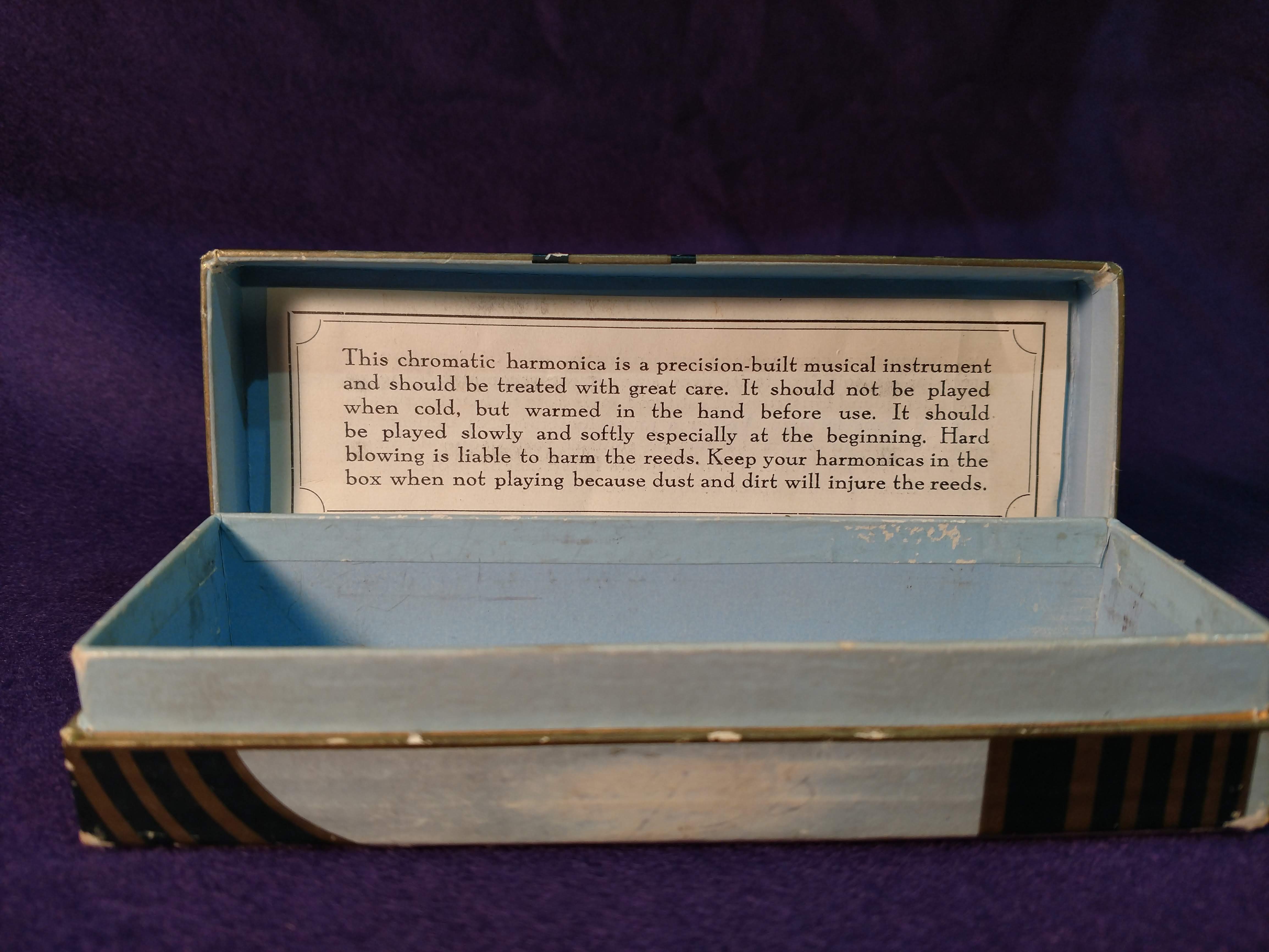 Quite honestly, this is a rather high quality harmonica, it's not cheap by any stretch. The chrome is in great shape, the chromatic button mechanism works flawlessly, and the reeds are in fantastic shape, AND in tune. If this one has been played at all, it's been played very little... it might be NOS, but the case does show some slight wear. And the "case candy"-- (the little sheet in the top of the lid) is actually printed as bi-lingual-- English on one side, and French on the other side.

So, I don't suppose you folks were actually expecting vintage Gretsch GUITARS??? I posted this in the "other equipment" section for a reason, although I was heavily tempted to post it in the vintage section.

Hope you enjoyed this quirky slice of Gretschiana. Now, I'm off to fiddle around on this great-playing harmonica.

What, not the ocarinas? COWARD!

Ya know Tim, even with this bonanza haul, my life will not be complete until I find an NOS Gretsch Musical Comb.

Still on the hunt for that rare bird.

And the more I think about it, I'd make a strong bet that if Jimmie Webster had been in charge of the Ocarina production, this model would have been billed as the "Burgundy Quail" model instead of the "American Broadkaster"...

Ha, love it! Cool stuff for sure!

A man after my own taste. I'd seen these and thought about them -- especially the harmonica -- but my "fun stuff" budget was blown recently (by a 1940's Gretsch coincidentally). Congrats. Ah, the Musical Comb...that would be a find.

I fully expect you to have found a pan flautist by then and jam on this at the barn...

Gorgeous tone, and gorgeous reverb in that room. Amazingly pure playing, too. He's not much on modulation on the ocarinas, though, is he?

Cool find. Gotta admit, you had me going, I was expecting some archtops, never expected ocarinas! And that harp is high class.

"Broadkaster Ocarina"...now, that's the kind of content i need at 7AM!

Tartan... Now ya gotta learn and incorporate the theme song from The Good, The Bad, and The Ugly into your band's repitua.

Well at least you aren't likely to have binding issues.

Cool score. What's the story? How did you happen upon these, just curious. I mean every Ocarina has a story, right?

Which model Bigsby ya gonna slap on those?

Well at least you aren't likely to have binding issues.

Cool score. What's the story? How did you happen upon these, just curious. I mean every Ocarina has a story, right?

I was cruising Etsy, of all places... Both of the sellers were antique dealers.

Which model Bigsby ya gonna slap on those?

can't use a Bigsby on an Ocarina... Have to use a Floyd Rose with a locking nut!

Dang they used that Broadkaster name for everything

Can you play the Legend of Zelda theme song though... ?