Effectrode's PC-2A is a high-end boutique pedal compressor generally accepted to work "pretty much just like" the iconic/famous/yaddayadda Teletronix LA-2A rack box. I have one (the Effectrode, that is), and it's wonderful. It also has tubes, is expensive for a comp pedal, and will work only with its included power supply.

I also have (and have had for years) the Aphex Punch Factory which includes more features than the Effectrode, can't possibly be made to sound bad, did little business when in production, and is now cheapity cheap on the used market.

In A/B comparisons, I can't tell the performance of the two pedals apart. The Effectrode can be adjusted over a wider range (and thus made to sound, if not bad, then at least not ideal for the situation), and the Punch Factory doesn't follow it into those wider ranges (at both the less-compression and more-compression ends of the dial). But in that huge middle area of functionality where we find the sweet spots for guitar, the pedals are indistinguishable in performance.

Moral of story: for less than 100.00, a used original orange-version Punch Factory will get you truly premium compression: ie, smooth, quiet, artifact-free, "transparent," velvety and rich. The PF and the amazing Boss CP-1X (which is pricier), in my obsessive opinion, offer the best cost-for-tone value in pedal compressors. (And the Xotic SP is only a hair's-breadth behind.)

These three make choices in low-dollar (NOT low-end) compression much easier than in the high end of the market, where there are more candidates. For the smoothest, most unobtrusive compression, it's the Punch Factory. For the classic OTA Ross/DynaComp effect, the Xotic. For idiot-proof ease of use in a widely versatile comp, the Boss.

Andy is using the Empress Compressor for this demo. Maybe look into this one. I myself use the Boss but then again I don’t use compression much at all and when I do the Boss does what it should.

I'm no compression expert (comprexpert?) but a short while ago I got a Truetone Route 66 OD-Compressor. The compressor half of it works great, and the OD side is great, too. Best part is, both have blend knobs so you can blend in as much of each effect with your unaffected signal as you wish.

I lke the MXR Bass Compressor or the MXR Studio Compressor. Both the same just different colors (Bass comp is white, Studio comp in Black). They both feel like a studio compressor and have enough options for me to keep the volume in check which is what I use them for!

In this photo you can see it, it's right before my Rubberneck Delay and JHS Spring Tank Reverb, and it keeps me from overloading those pedals (and all the bottom row pedals except the tuner are in the FX loop of the Felix)! 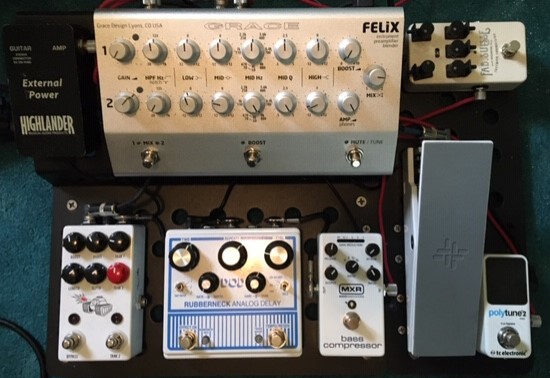 Addendum: Probably 20 years ago now, a guitar buddy had one in his "junk gear bag" and gave it to me. Awesome!

I found this thread last week, chose not to bump it forward to see what's new...but, now it's done!

I need a Compressor, too.

I think the MXR M76 Studio...not sure a kit pedal wouldn't be fun.

Used Aphex Punch Factory. Try one of these sub-100.00 examples.

And...the point I keep trying to make: for all practical purposes, the Punch Factory (at a fraction of the Effectrode's cost) provides performance indistinguishable from the PC-2A. No one told me this, I didn't expect it, and I wouldn't have believed it if I hadn't spent an hour or so A/B-ing the two, with headphones and a critical ear.

There's no particular reason the two would ever have been compared in available online reviews, because they weren't on the market at the same time, they price in different tiers of the market, Aphex is perceived as old news, and Effectrode is new-hip-boutique.

But when I got my PC-2A and tried it, I thought hmm, where have I heard this compressor behavior before and first answered the Joe Meek rack-mount. Which was a correct answer, but I also remembered the Aphex is optical too. So I did the obsessive A/B thang and, over the range the Aphex operates, couldn't hear a difference.

I knew the Aphex is underpriced used (though prices have been higher over the past several months) because every time I thought about selling mine I'd looked at Reverb prices and been offended. It's a way better compressor, thought I, than those prices suggest. I'll keep it before I take that kind of money. But until I discovered its functional identity with the much boutiquier Effectrode - and by extension the Famous Rack Box it's based on - I hadn't realized just how undervalued the Aphex is.

Then throw in the Punch Factory's XLR out (switchable between compressed or uncompressed) to use it as a direct box, a switch to calibrate response for either passive and active pickups (which are more common in the bass world), a ground-lift switch, and the widest ranging power compatibility I've ever seen in a music device: you can use a 9V battery, virtually any power supply over 5V (AC or DC) that will fit the socket, or phantom power (via the balanced XLR output). Not to mention the entertaining LED compression meter. Overall, it's a helluva package.

A review from 2004, when the Punch Factory was new: https://www.soundonsound.co...

The lore behind the PC-2A, and a glowing review thereof: https://www.anatomyofguitar...

When shopping compressors, it's always a thing to check with the feller at Ovnilab, a fiercely independent private blogger who bought every compressor he reviewed over a long period of time (he's no longer obsessing) and evaluated them himself from his perspective, pulling no punches. He's bass-centric, but always considers guitar applications. Here's what he said about the Punch Factory: http://www.ovnilab.com/revi.... And here he is on the Effectrode: http://www.ovnilab.com/revi....

(As I said, no direct comparison with the Punch Factory...no reason there would be, as superficially it's an apples-oranges comparison.)

You'll note the Ovnilab review of the PF mentions "issues" with the orange version (without specifying what they are), and specifically complains about the plastic jacks. I've had no problems with mine, but take it for what its worth. Also for what it's work, I was hipped to the Punch Factory by a former GDP member who was a studio guitarist in Nashville. No mention of flaky jacks from a guy who would have had frequent opportunities to plug and unplug.

If the Punch Factory is so great, why would I ever have considered selling it? Because even when it's compressing as much as it can, it's subtle (which also applies to the Effectrode) and sometimes I want more obvious compression, so on my boards I favor comps with more range. I keep the opticals for smoothest possible behavior when it matters.

All of which makes either the PF or the Effectrode ideal for guys who generally don't like to hear their compression, but could still benefit from some light-handed massage of their dynamics. Nother words, I can't hear what the sucker's doing, but I sound better when it's on than when it's off.

And, in fact, you can hear either unit compressing when they're cranked to the max. But they're still uncannily smooth, quiet, and sonically "transparent."

A lot of folks seem to like compressors with a blend feature. The Punch factory doesn't have this, right? Looks like it is worth trying. I've got a Keely 4 knob on my gig board but hardly every use it. The Keely seems to always do too much.

These opticals are so smooth and subtle, even at the onset of the note, that the blend is comparatively less useful.

Buying into the hype, I've had both the Keeley 4-knob and the Compressor Pro. The honeymoons didn't last long. The 4-knob presumably "improves" on the classic Ross/MXR Dynacomp circuit by making it more tweakable/versatile. For me, it just make it harder to find the classic Ross/MXR OTA effect, and the additional functionality thanks to the two extra knobs offered nothing that sounded better than the core sound of the Ross/MXR.

To be honest, I've forgotten the tech in the Comp Pro, just remembering it's pitched as be-all end-all in terms of studio quality and extensive flexibility in a pedal. It underwhelmed, and after extensive comparison with the similar Empress comp...I kept the Empress. It had cleaner tone with fewer artifacts, and while it's "colder" and more clinical sounding, that seemed more appropriate to kind of surgical attack/decay/ratio/recovery shaping inherent in the promise of a "versatile studio comp on the floor."

I would agree the Keely 4-knob, at its best, does "too much." To some ears and tastes, the same is true of any of the hundreds of compressors based on the classic Ross OTA circuit, with the tonal coloring, bounce, suck-and-bloom behavior characteristic of the circuit. Some are quieter and smoother than others, and include controls to extend their usability (such as, yes, blend).

In the OTA extended family, I liked the Wampler Ego better than most - but in the end, it took up too much room and cost too much for me to devote to that particular flavor. Both it and the Xotic SP do include the blend feature.

I still prefer the Xotic SP compressor as the best in that class for me: affordable, compact, very clean and smooth (for OTA), and I can always find the Ross/Dynacompitude I'm looking for among its three switchable preset compression ratios. I just don't see any reason to invest more space (or money) to that tone. [See footnote.]

And I'm saying that as someone who was cold-dead-hands committed to the DynaComp I bought in 1979. For 20 years after that, if I was playing electric guitar, chances were about 85% that I'd have the DC on. By comparison to the Xotic (and various other OTA designs), I just don't find the Ross or DynaComp worthy of their current cult status. I appreciate that they broke the ground for compressor pedals, and established a long, deep, and revered tone tradition. Historically they're very important, and for me (a compressor junkie) their characteristic sound is indispensable. Just not all the time - and the newer designs improve on the originals in pretty much every way.

In any case, optical - as typified by the Effectrode and the Punch Factory - are a whole nother thang.

FOOTNOTE: I haven't tried the Wampler mini-Ego, which builds a couple of extra functions into the same form factor of the Xotic EP, and for only a few bucks more. I'll probably have to try one and see if it boots the Xotic from its stall in my stable.

Maxon CP-9 Pro+. Seriously, my search for a comp ended dramatically after I picked up one of these a few years back. No words can describe just how good these things are but here's a blurb from the company...

"The CP-9 Pro+ Compressor is the newest offering in the Maxon Nine Series. Much more than a reissue, the CP-9 Pro+ is a completely new circuit that packs more punch and power than the original! Featuring patented low-noise DBX compression technology with Threshold, Ratio, and Gain controls, the CP-9 Pro+ offers up to 30 dB of clean gain boost with a 10:1 maximum compression ratio. Reduction status LED accurately displays compression effect while 18-volt circuitry provides maximum head room with ultra-low noise operation and full-frequency response for use with any instrument. TBS switching with 4PDT switch assures quiet, transparent operation in bypassed. Simply put, the last compressor you'll ever need to buy!"

Too big for your board?

Didn't Frankenstein use one of those to jumpstart his creation?