My '68 Tenny prefers flats. It may be due to my hamfisted playing, though. With an unwound 3rd string, the first few frets are way sharp, perhaps due to my death grip technique. With 11 flats, the intonation is fine. Flats do feel luxurious.

My P-Bass and my 5442 bass has flats for the James Jameson-ish tone that I love for bass but my Rick has Rotosounds just coz it seems to make more sense to have those on a Rick (to me, anyway).

Twonk Vs twang. Can't hardly stand em. Get fooled into trying them from time to time before I rip them off in a rage. Expensive for 3 or 4 strings that are different from roundwounds.

Get fooled into trying them from time to time before I rip them off in a rage.

I do keep flats on a handful of guitars that want them. But that's exactly the experience I had when I tried them on a Dyna Jet. I couldn't get them off fast enough (before I'd clipped them to length - which is how my keep-a-set-for-testing strategy began).

When they're bad, they're really bad.

Get fooled into trying them from time to time...

I know that feeling. After reading a million times on the internet that you have to use flats to get the "vintage tone" or "Beatles tone" because flats were the only strings available until the mid/late '60s, I probably tried harder than I should have to like them, especially the godawful old Pyramids (though I've heard they're better now, more like TIs). Aside from being utterly inaccurate (and the tone gurus espousing this view evidently weren't old enough to know this???), it doesn't really pay to be "authentic" if you don't like the sound you're getting.

But I'm with Proteus and others who've found that they work well with some guitars.

Never tried flats however, I may run the gambit using Proteus's protocol for string migration and conservation.

I would imagine that flat-wounds tear up your fingers less as well?

Flats won't tear up your fingers whatsoever. However you may want to consider D'Addarios Half Rounds, which I use on all my electrics. They sound the same as roundwounds but are much quieter and won't chew up your calluses at all. I use their Flat Tops, their acoustic equivalents on all my acoustics.

Currently using Pyramid Gold med/heavy Flats on my 6120T '55 VS for gigs. The heavy gauge is pretty close to what I use on my acoustic so it's easy to switch back and forth... 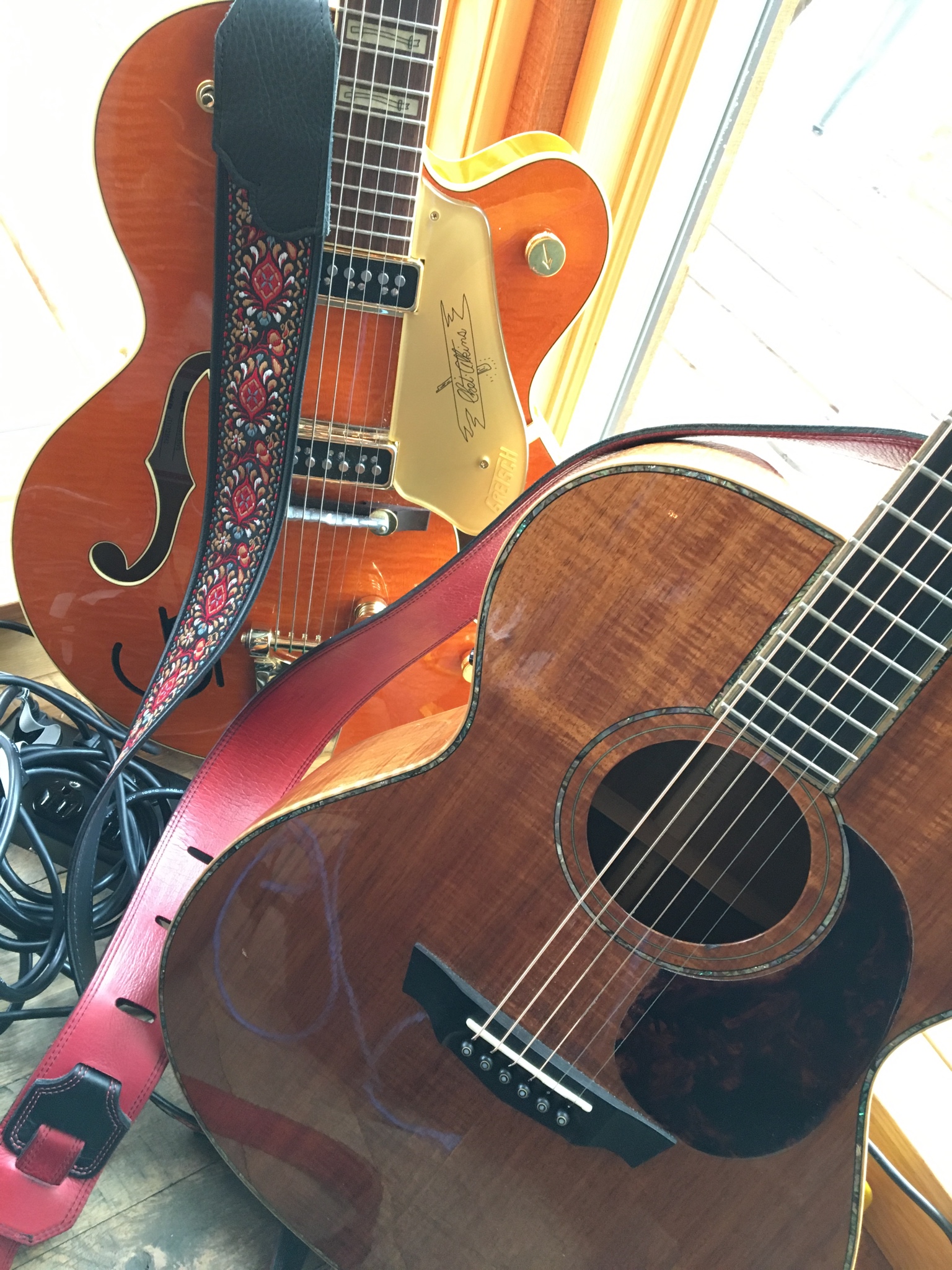 I keep flats on my 6120DSV as well - similar to the VS. They sound killer on that guitar. Boom punch clarity. Every note matters, every note gets its say. You gotta drive it very deliberately, but the tone is rewarding.

I keep flats on my 6120DSV as well - similar to the VS. They sound killer on that guitar. Boom punch clarity. Every note matters, every note gets its say. You gotta drive it very deliberately, but the tone is rewarding.

About driving it deliberately, I agree, but I don't know any other way

I've been gigging with this guitar for a few months now, and at every gig I bring it to I find a new cool tone. And for fingerpicking, the middle position with the neck volume rolled back just a bit, gives me a tone that I absolutely love. People that say flats won't sparkle probably aren't hearing them through Dynasonics (or T-Armonds in my case).

As for the Flats. I wish Thomastik made theirs with the gauge I like, as I love their feel, they are seriously silky feeling, but the Pyramids sounds pretty damn good.

I still have a stash of about a dozen sets of these... wish they still made them. Since I'm not a fan of D'Addario Chromes, I'll have to go to TI's once I've gone through the Gretsch strings. Well yeah. Chromes are for when you really want the flattest of all flatwound tones. TIs and Pyramids are both brighter and ringier.

Most of my guitars are strung with round wounds, but I have a few that just sound better with flats.... This one, for example. I've strung it with medium flats since day one.

I've been using flats on my 5120 for quite a long time. I agree with the bassy sound somebody observed up the thread a ways. I found that to be just what I was looking for as I palm mute as I finger pick.

I also keep flats on my Rick 12 string. The thuddiness of the wound strings brings out the chime and jangle to advantage on the unwound stings, particularly the D and G pair.

Hey, I learned what little I know about guitar on acoustic instruments-- my left hand is pretty heavy as a result... so sue me.

Surely you're capable of bending a .026 wound G string.

And if the Yankee soldiers pull down the local telegraph lines again, I can always loan the railroad some extra wire for repairs.

I have the thomastik jazz swing 12s on all my hollows. But rounds on the tele. I’m yet to try flats on a tele,. They are

I find on smaller amps like a Princeton reverb or 5e3 there is too much bottom for them . The non verb Princeton and bigger amps are fine

Has anyone here tried flats on a tele?

Yes, and I love the combination. Instant Luther Perkins and a very close Grady Martin approximation.

"Surely you're capable of bending a .026 wound G string."

that's gonna be a "no" from me, dawg. i use John Pearse lights on the 6-string acoustics and Martin lights on the 12-string. i bend a .026 about as well as Stephen Hawking.

I run flats on all of my Gretsches, all but one of which have Dynas. I use them on Jazzmasters as well. Everything else gets pure nickel round-wounds.

I use flats on my '65 Gibson 335 12 string, as well as my Epi Joe Pass, both with humbuckers. Never really liked them with any of my single coil gits oddly enough. Thomastik are my go to hands down.

I found out, back in the 70's, that strings are just another form of tone control. Same with pick weights. So you may have to do a little investigating to find out what string, what gauge, works for you. Currently I only have flat wound on my Sheraton, which delivers an incredibly full voice through our church's sound system. The rest of my collection has either pure nickol round wounds or Elizer Nanowebs. But, these are all combinations that have taken over 40 years to evolve. And, just another excuse to sit down and play. (like we need excuses!)

I gave up on trying flats way back in 1967 but ran into a guy with a Gibson L-4 CES last year with flats and kind of liked them so after trying an ABR-1 on my ES-225 for the first time decided to go with a set of D'Addario Chromes. Absolute magic on that guitar and my Ric too.

I guess that string technology really has improved!

Well yeah. Chromes are for when you really want the flattest of all flatwound tones. TIs and Pyramids are both brighter and ringier.

Chromes worked for me on my National Style-O. Great for slide!