I'm cross posting this from SurfGuitar 101 - there's been a bunch of discussion about Bigsby springs here too, so figured I would ask.

I've got some AllParts JM/Jag Vibrato units, the springs are of varying tension. The one guitar that I have that is the smoothest/softest spring actually looks like the spring was chopped almost in half. Instead of buying a specific version spring (Reverend) - has anyone here instead chopped their spring and gotten a softer trem action with less tension (ON A JAGUAR/JAZZMASTER)?

Car guys used to cut springs on rides before everybody in the world started producing custom springs, so it's entirely possible, just don't know if it's worth hacking up one of my spare springs to try it out.

Cutting the spring will lower the arm....it WON'T make the action softer. You need a taller, softer spring for that. Any good hardware store will have a good selection of springs.

Unless you subsequently stretch the remaining spring, the vibrato arm will ride as much lower as the amount of the spring you cut out. Which would likely be a Bad Thing, though it can be remedied by bending the arm itself up. Still, you wouldn't have as much latitude for bendage.

So stretch the spring after you cut it.

It's worth it to me for you to cut up one of your springs to test it!

Admittedly, I have many dumb questions and my grasp of physics is not as strong as I would like, but the Jazzmaster spring rests on the retention pad (for lack of a better term) which is threaded and can be tightened up to the length of the spring. The JM vibrato that I have that has the shorter spring (and softer feel) has the exact same arm as the one that has the stock arm, no bendy-bendy required. I just restrung both my guitars so pictures of the undersides of my gear will have to wait (One of them got 9's, the other got the solid nickel rockers recommended by BZ).

I've got two spare springs, and AllParts stuff is cheap, so it's not an entire loss if I killed one. lol

I'm reading my initial post and obviously I wasn't clear - my question is not Bigsby related - I'm asking about Jaguar/Jazzmaster Vibratos.

Sorry about being unclear. - Edited original Post to clarify.

For Jazzmaster types with light strings, use a brake shoe retaining spring from a 1960 Ford Falcon.

Ah, JM. Velly intellesting. I have several guitars with such a vibrato that I wouldn't mind being a little softer. Maybe I'll spearmint too.

Still, my all-time favorite whammy is on my '66 Mustang. (Not Ford.) That design, despite the reasonably goofy bar that sits atop the unit, should be used in more guitars.

just know when the jazzmaster was designed ...including the trem...they were coming from the factory with 13 or 14 flats!!...you're lucky to be getting away with 09's!! especially if using the original bridge

i have 09s on mine but i changed the bridge and don't use the trem anyway...i prefer bigsby trems

Proteus - I've searched for Fender Jaguars and it's about the same. LOL

Neatone - it's an experiment, I'm using this down time to play around with what I've got and make minor changes to see what happens.

Proteus - I've searched for Fender Jaguars and it's about the same.

Would be, yep. And then they had to go and make a Toronado!

I don't have my machinery handbook with me for the math involved, but I can say that cutting active coils out of a spring will make it stiffer not softer.

if you are looking to experiment, check into this type of bridge 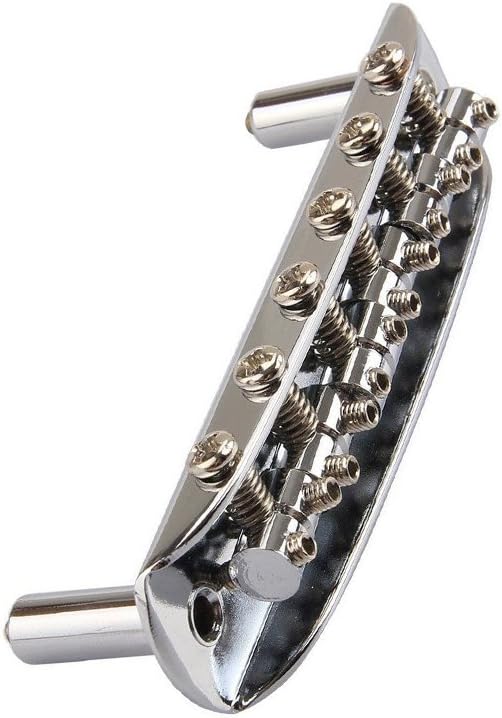 available for super cheap on amazon

The amount of play in a spring depends on the space between the coils. Too little space, and the arm's travel will be limited.

Appreciate all the input! Again, I'm no good with physics - what I take from this (and the SG101 discussion) is that likely the spring that's already shorter just happened to be a spring that had less coils, then got chopped (it looks chopped and ground down).

I picked up an actual Fender JM vibrato (used) at my local guitar shop a few weeks ago because, well, who can pass up a deal? It looks unused, I suspect that my local shop installed a Mastery (because they sell them) then threw it into the parts bin for $20. Anyway, it's got less coils than the AllParts springs, so I'm going to throw the entire assembly on at the next string change and see how it feels. Honestly the GHS Nickel wound isn't giving me the twangyness I'm used to, so that will probably be soon.

I'm going to keep my eye out for one of these mythical "hardware stores" that carry springs (and have also contemplated ordering a $5 1960 Ford brake kit, just to see if it works). Getting a softer feel on my JM trems is turning into an entertaining quest.

David, so adjusting spring tension doesn't get it where you want?

Not so far, it's lightened it a little but not much and it's dropping the arm way way down. I'm also afraid it's going to unscrew completely and fall inside the guitar so I'll have to wait until I change strings (or tailpiece) and see how far I can unscrew it without disassembling it into the guitar.

Pictures are worth a thousand somethings, if I can get pictures of both next time I will, maybe visually it will help define the situation.

Getting a softer feel on my JM trems is turning into an entertaining quest.

When you nail it, let us know. If the brake springs work, and you end up with more than you need, I'll take a couple.

Just for grins I ordered a 1960 Falcon brake kit - the spring in that kit is bigger (Bigsby sized? I don't have any Bigsby springs handy to compare) so it won't work - just for future reference for those of you reading this 30 years from now. Allparts spring on the left, 1960 Falcon Brake Kit on the right.

I did pull the spring off the Jazzmaster AVRI vibrato tailpiece that I had gotten for $20 and put it on when I changed my strings today - it seems a little smoother now, but I also put 9's on the guitar so it may be the reduced tension that's smoothing it out.

A trip to Ace Hardware may be in my future, there is one relatively close by.