I have a Vox AC15 that should’ve had a blue alnico speaker. Turns out it was swapped for a Cannabis Rex. It sounds alright. I can’t seem to spend the money on a blue Celestion. Weber has some alnico 12”s at decent price. Got any opinions for me? I’m looking for best options or just telling me what I have is as good. Let’s talk...

I've tried the Weber alnico Blue style speakers - they sounded very different to me. I haven't heard anything which sounds like the Celestion alnicos - I really like the Gold.

I wouldn't say the Celestions are the best, but nothing else sounds like them. In some amps they are incredible, and your Vox is probably one of those amps! I love a Gold in a 5E3 Deluxe and I have one in my tweed Super based amp - it's perfect. But I also really like the Celestion G12H. The anniversary G12H and the Creamback G12H are both wonderful and in some amps I prefer them over the alnicos because the alnicos can be a bit brittle sounding - a bit too harsh on the high end.

There may be other alnicos out there which would suit your amp but I wouldn't recommend Weber Blue for that amp. Too midrange focussed and just not very good IME. Other Webers can be great in the right application.

I never got happy with my AC15, which was the bog-standard base model from 10 years back or so. No idea what speaker was in it. The amp was both too heavy and too loud for its size, and I never bonded, but your post prompts me to wonder if it was a speaker problem.

My current Vox, an AC10, is everything I'd hoped the 15 would be and wasn't - and it has the upgraded Celestion 10 Greenback. So is the speaker the difference? Dunno.

HowEVer, I also have a Peavey Classic 30 (a not-completely-unVoxlike contraption) with a Cannabis Rex. And I like it too. It's warm, full, and not at all shrill in the high end.

From that mixed and utterly unscientific ground of experience, I wouldn't know what to tell you to do, but maybe the data points will be useful.

As for Weber, I've heard nothing but good. And it's an Indiana company, so what could go wrong? Good old heartland values.

(Given what I can actually tell you, apparently I'm just posting to see my pixels on the internet, but you did say "let's talk...")

Good info. Thank you. Any others?

I've had excellent experience with Weber speakers. The two 12F150s in my Twin put up with many years of abuse, and were reconed by Weber for a small fee.

I don't have enough experience with vintage speakers to say how accurate they are to the originals, but I've never been disappointed. I've tried their Greenbacks in my friend's Plexi clone, their Jensens (ceramic and alnico) in the aforementioned Twin, and the Silverbell 10 (alnico) in my Vox AC4.

If you want it to sound like an HTG AC15 put the Weber Blue alnico (75 watt rating) or the blue Celestion in it. The higher wattage rated Webers are smoother than the 20-30 watt versions. The Cannibis Rex couldn’t sound less “AC”. FWIT, Brian May has his wall of AC30s loaded with the blue Celestions.

If you can find a Celestion with the original Pulsonic cone, that’s nirvana. Otherwise IMHO the Weber’s are as good as or better than the Celestions. The 75 watt blue is stellar.

I love Webers overall. Purchased several over the years, and have been happy with them.

I've had the Weber Blue too, and it sounded good to my ears, until I finally broke down and bought a Celestion Gold 12".

Not a cheap speaker, but what voice it has. Well worth the money, and it makes my Vox AC10C1C1 sound huge plugged into the 1-12" cab loaded with it.

My Cave Valley Plexi based head sounds killer too.

An old Gibson amp sort of fell into my hands some years ago. The speaker cone had disintegrated, so I put in a Weber. It sounded fine to me and I’ve played this amp at many gigs. Not once has anyone come up to me at a gig to tell me my speaker needed to be different.

For that matter, no one has ever told me my pickups are wrong, or my pots should be a different value, or that they had to leave the show because my delay was a Carbon Copy as opposed to something else. Trying not to overthink this stuff.

Me too. I mean me either.

The premier perveyor of snake oil for the music industry!

He's one heck of a guy, and an awesome keyboard player!

I really like the overall sound and clarity. The head room is nice. For me two thumbs way up to Weber.

He's one heck of a guy, and an awesome keyboard player!

Don't get me wrong - I like Weber speakers ok and have used various models over the years. Putting some Weber 35W P10Qs in a SRRI really got it singing! But I don't like his Blues. I've tried in 10" and 12" and been extremely underwhelmed each time. Maybe in the right amp they would sound good but they sure didn't in mine!

Well I've had good luck with the Weber Blue Alnico 12A150 in my 1964 Deluxe Reverb, but it took FOREVER to break in. I almost gave up on it, but I stayed the course and I'm glad I did as I really like it in there now. 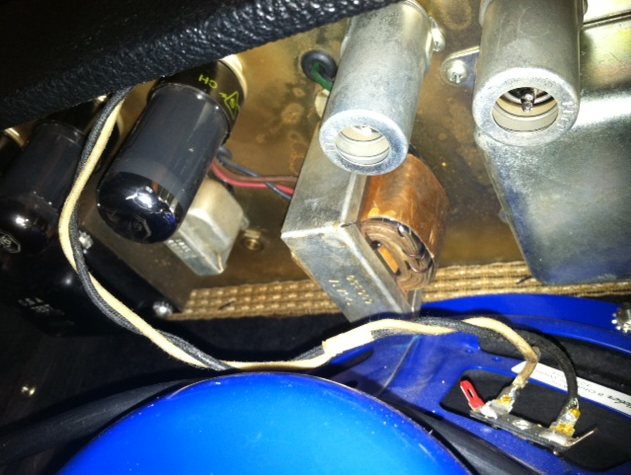 Good responses from you all. I’ll ask for an opinion. Is a blue Weber going to be a better option than the CRex I’ve got? Or should I save my quarters and just buy the Celestion?

That said, everyone who's after that type of tone needs to try a Celestion once in life.

I've had several amps that I've had my Gold in. When the amps left, I kept the Gold. I like it that much.

Good responses from you all. I’ll ask for an opinion. Is a blue Weber going to be a better option than the CRex I’ve got? Or should I save my quarters and just buy the Celestion?

What’s the output impedence on your AC15?

Thought Id share a video i just did using the Weber Blue Dog 15".

I really love the the way this sounds. Its all very new to me using this combo and Im super stoked. Ive been a 30 year 58' tweed deluxe man.

Threadkiller, what makes you think your AC 15 came stock with a Celestion Blue? It used to be the speaker of the vintage originals and Vox always had a model with it in its reissue range (usually with an extra letter 'X' somewhere in the model number) but most of the AC15s and 30s offered and sold come with other speakers. In recent times it's a Greenback; used to be a Wharfedale before.

IMHO the Cannabis Rex is a great speaker that – some say – tames shrill amps. My experience is that it doesn't take off highs but smooths them out. And the CR sounds good clean and overdriven. I have one in my SF Deluxe Reverb and don't see a need to change it. It takes my pedal board with 3 drive pedals like a champ.

So, if you want that traditional 60s Vox sound (and the rest of your gear plus playing style can make that happen) get the Celestion Blue. Otherwise I'd give the C-Rex a chance. Good luck!

My amp is one of the X series with the stock blue. Got it used for a great price from Guitar Center online few years ago. Looks like a new amp. No blemishes. Somebody swapped the speaker. They failed to mention that.

My amp is one of the X series with the stock blue. Got it used for a great price from Guitar Center online few years ago. Looks like a new amp. No blemishes. Somebody swapped the speaker. They failed to mention that.

Since you got it for a great price I wouldn't worry too much.

Sorry to have to agree with most everyone. I finally got the dough and put in a 12 Celestion Blue in an Epiphone.....incredible, and fairly true to the original, as in our prior 63 AC30 with Bulldogs. Knavel has a Weber Bluepup (a cheaper 10" than the gold)….nice sounding, but lower sensitivity, thus much lower volume...and generally lackluster. I run my guitar through multiple pedals, and bunch of pots along the way, enough to de-sparkle anything...but the Celestion bite keeps it alive, and the volume difference really is important for the tweed Harvard I use live. I'm still waiting for Celestion to make a Blue 10" for pairing with EL84's, as the golds can get a tad heavy. 1000 of what you don't want will never equal one of what you do want.