I recently got a Vox AC15CH head, which is great in all ways except the reverb. The stock pan provides a cavernous reverb that doesn't lend itself well to the surfy drip I love. So I put together a little shootout video of the stock pan vs. three other pans with varying spring count and decay.

I'm going to guess I'm not the only person here with a modern Vox amp, so hope this might be useful to someone.

Hey man don't forget the good Thomas Vox tube reverb in the Cambridge and Berkeley. I still say a tweaked Thomas Cambridge Reverb will give a Princeton Reverb a serious run for the money.

Still reverb pans, regardless of how they are driven/run etc. can really affect things.

Thomas Vox reverb is in a league of it's own! Massive, luscious, and drip-tastic! The modern Vox amps use a different circuit unfortunately. FWIW, you can see my V1121 Buckingham off to the right in the video.

also there are major differences among the recent korg era vox ac15's...

Neatone, well, at least modern Voxes use standard pans, unlike the 60s ones with the phono cartridge tanks!

You're right, there are limits to what can be accomplished with this circuit. I've read there may be a cap or resistor to change to enhance it, but I don't know enough about electronics to verify.

really good stuff mel...didnt mean to underplay it...if it sounded like i was..glad we on same page with #4

& i like that switcher box you rigged up!! hah

the boost pedal brings in some noise..but that kind of boost can be accomplished within the vox ac15 itself...by changing some parts on the reverb return...fooling with impedences

like how amps have different input channels..lo and hi...a simple resistor pads it!

sure a sharp schematic reader could explain exactly what to do!..and what the pitfalls might be...added noise etc

Neatone, I didn't get a tone of underplaying it. Now I'm worried - did I miss something?!? ;)

The switcher box is a special from when our local Radio Shack went out of business. It's usually tasked with connecting our 8 track player and cassette desk to our hifi.

I agree on the added noise. Interestingly, the amp has several ferrite beads between the reverb pan and following gain stage, so obviously they were already trying to control noise.

I've asked an EE friend what mods, if any, to the component values of the circuit can achieve the same db boost, ideally without noise. If he finds a way, I'll report here.

That's a really nice comparison Mel. Hooking up the switcher box, and then using the booster pedal (I'm not sure that idea would have readily occurred to me) are such great ways to compare reverb pans.

My EE friend got back to me with the suggestion to change the values of two compenents at the reverb return op amp - C37 changes from 330pF to 100 pF, and R52 changes from 100k to 330k. He also told me that in general decreasing the value of C37 will increase the hi frequency gain, and increasing the value of C35 will increase bass frequency gain. To my ears, adding bass to the reverb would make it muddy so I left that alone. I tried different values for C37, down to 22pF, but 100pF was the nicest balance of drip without harshness. There's some ultra high frequency oscillation when the reverb is maxxed, especially when the tremolo is on for some reason, but backing off on the reverb level and a bit of top end cut and it goes away.

Another fun thing I discovered - as some of you know, being a big fan of reverb, I've developed an external mix level adjustment for the Fender 6G15 circuit and vintage Fender -Reverb combos which I call the "Surfy Drip", and, since the Vox pan has the same output impedance as the Fender pan, the pedal works with the Vox, too, as demonstrated in the attached video. 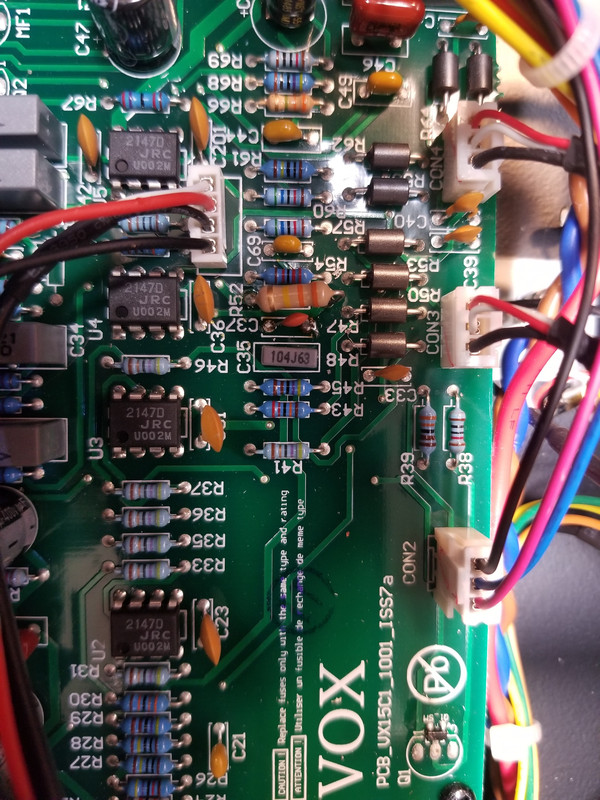 here is how the surfy drip is connected to the reverb circuit. I put the jack for the pedal through one of the plastic grilles so no drilling of metal or wood. 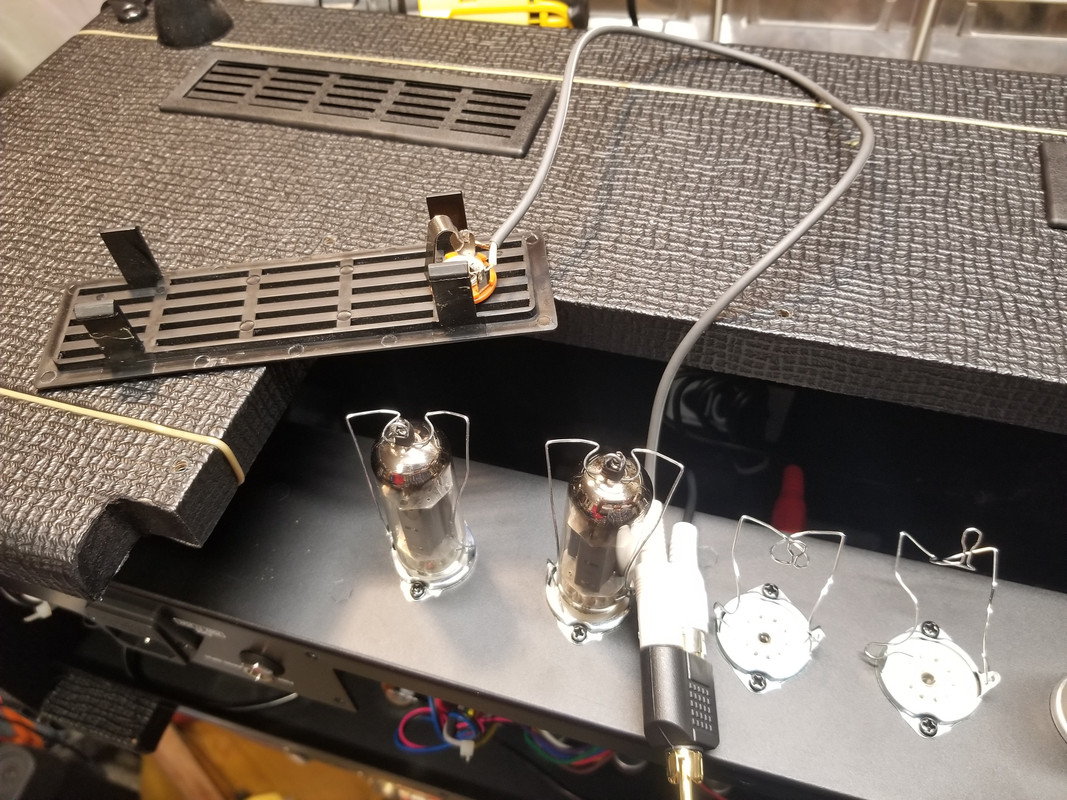 here you can see the RCA splitter where the surfy drip jack attaches at the reverb return. Also, note the full length reverb pan (4EB2C1B) fits just fine inside the head. 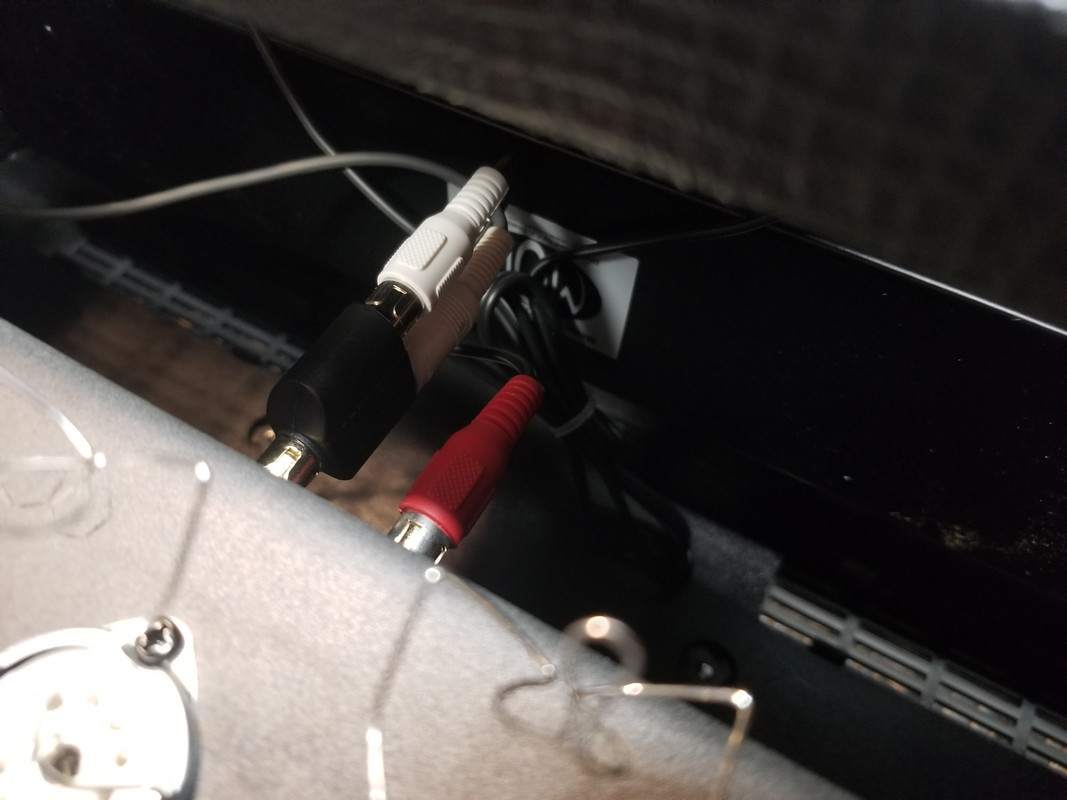 great fendery verb sound out of a vox! that pedal is great!..but i thought perhaps it was contributing to oscillation!...if you are brave, try changing c35..as it will definitely affect the tone...and perhaps even the oscillation point! how the two -c35 & c37 interact with each other will determine the frequency response i.e. tone

Thanks Neatone! Yes, there's something about having the Surfy Drip plugged in that encourages oscillation. I suspect it's basically RF antenna noise, as the oscillation was much much worse if the jack isn't positioned where it is. Maybe I can simply shield the jack. If not, well, I'm pretty excited about how the amp is working as is so I'll probably play it a while as is before futzing with it any more.