If you just want to see the new amp, skip to the next reply. Until then, I feel obliged to discuss some of my amp journey, and what brought me to build the low watt Bassman.

Some of you may remember an amp I made about 8 years ago. It's a kit offered by Mojotone, a recreation fo the 1960s Silvertone Twin Twelve (minus the shoddy reverb and generic tremolo), seen here graced by my lovely Gretsch 6120 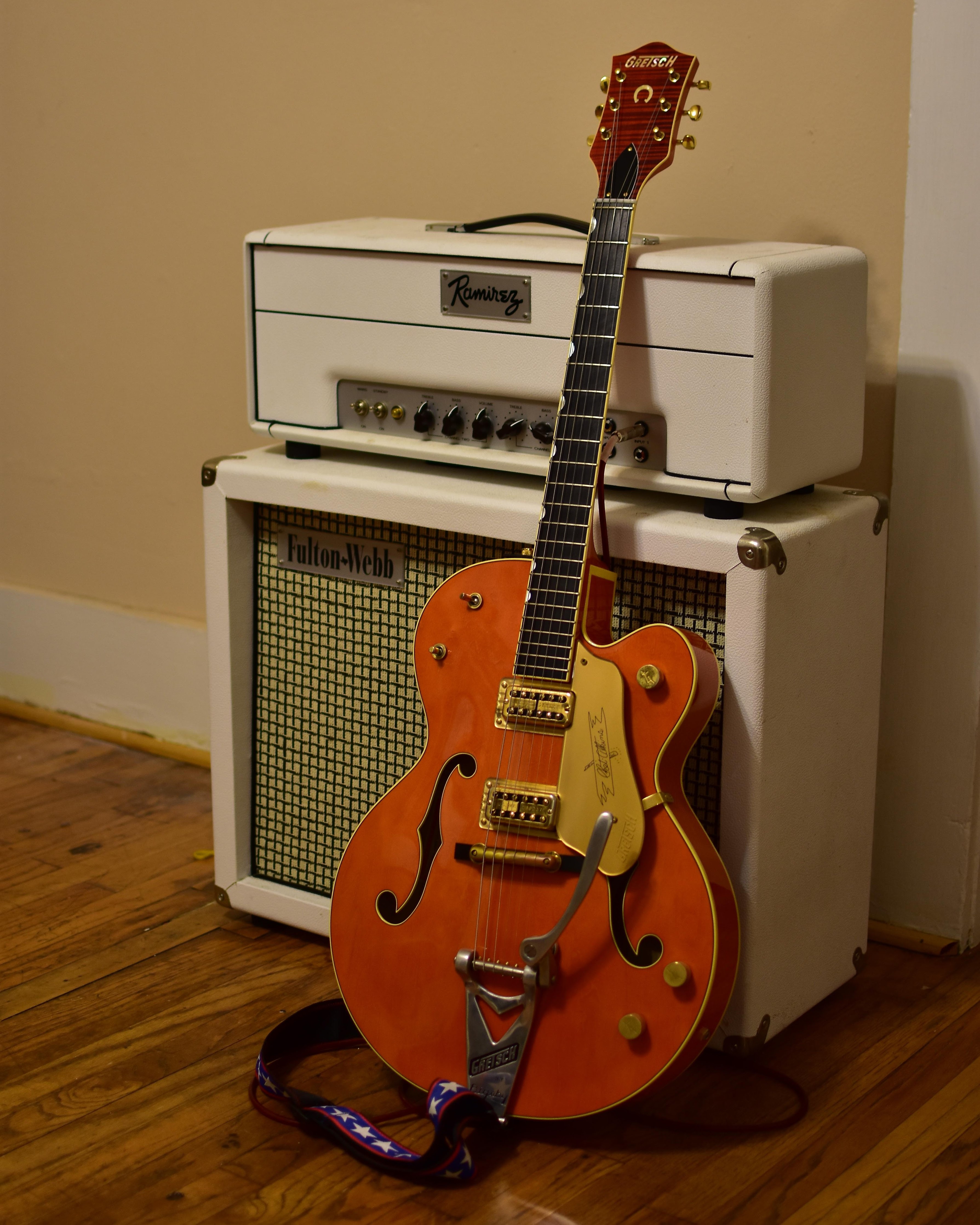 The amp was great and served me many years, but truth be told, it didn't do the Silvertone thing very well, I think it simply had too much power available, due to it's more traditional power supply (the original 1484 had a pretty low-rent power supply involving lots of voltage doublers and such). You could get the raggedy Silvertone breakup, but you'd be deaf by the time you got there. Anyone who's played a real Silvertone 1484 knows that headroom is not in its vocabulary. 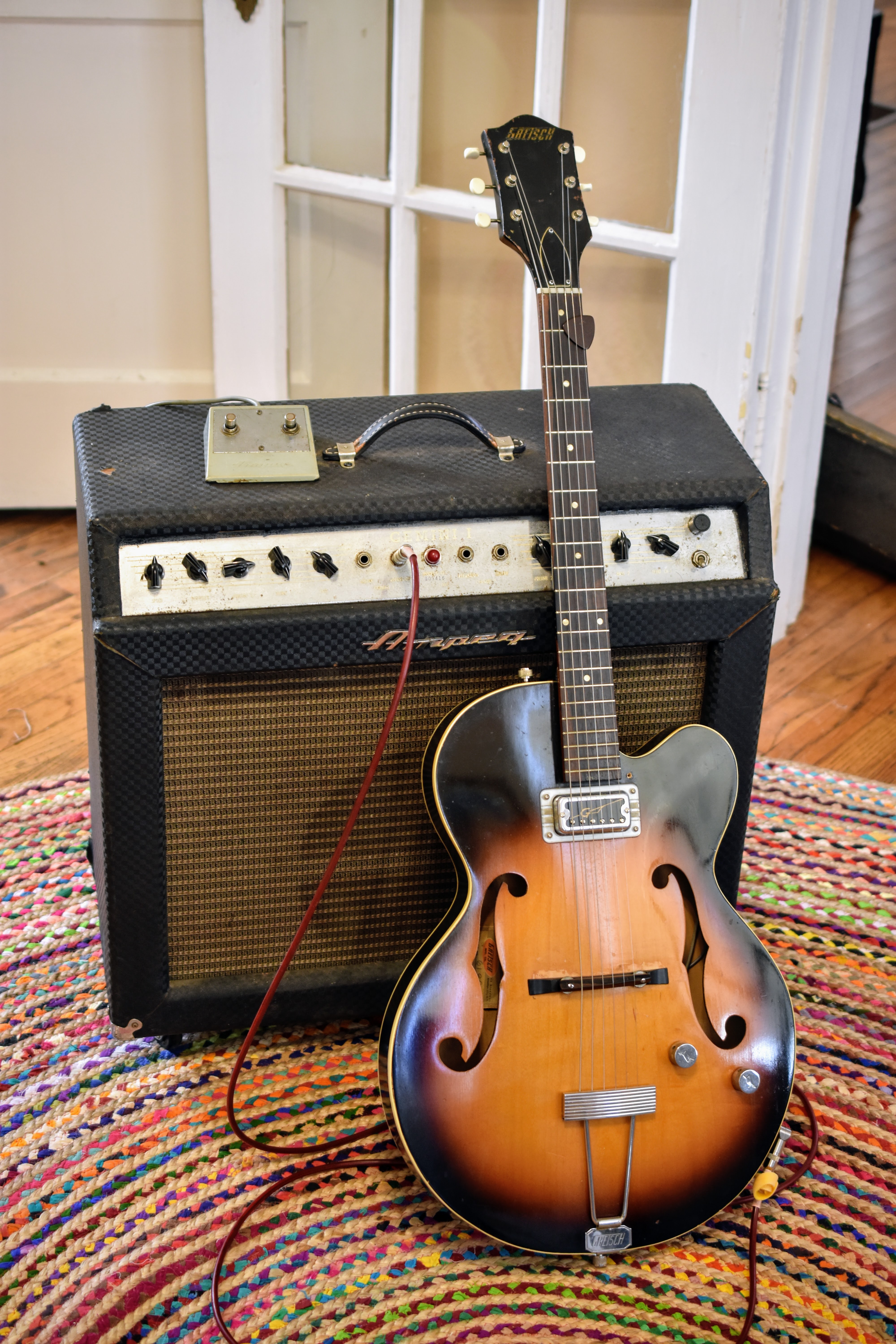 Now this thing has some mojo, and it took me a while to realize, it does the Silvertone thing better than the Silvertone I made. 220k plate loads, baxandall tone stack, 6GC7 concertina inverter, and a fairly loosey goosey power supply. With beauty reverb and trem to boot, it's what you always wanted your Princeton/Deluxe to be.

And so the Gemini became my #1, and the faux Silvertone sat unused, and too loud.

But then the whole coronavirus thing has left me with more free time than usual, and after working my way through numerous other unfinished projects in my music room, my eyes fell upon the lonely 1484. As they say in the real estate biz, it's got "good bones". A chassis, transformers, and tube sockets, it's only a handful of bits and pieces away from becoming another amp.

Having my chimey, jangly, mostly clean needs satisfied by the Gemini, I decided to turn the Silvertone into something with with a little more rock and a little less roll.

Well when I think "rock", I think Bassman/Plexi, so that's what I set my sights on. I ruminated on the 5F6A schematic, looked at the various popular modifications, and settled on this bill of features:

So here's what I came up with (for the amp nerds): 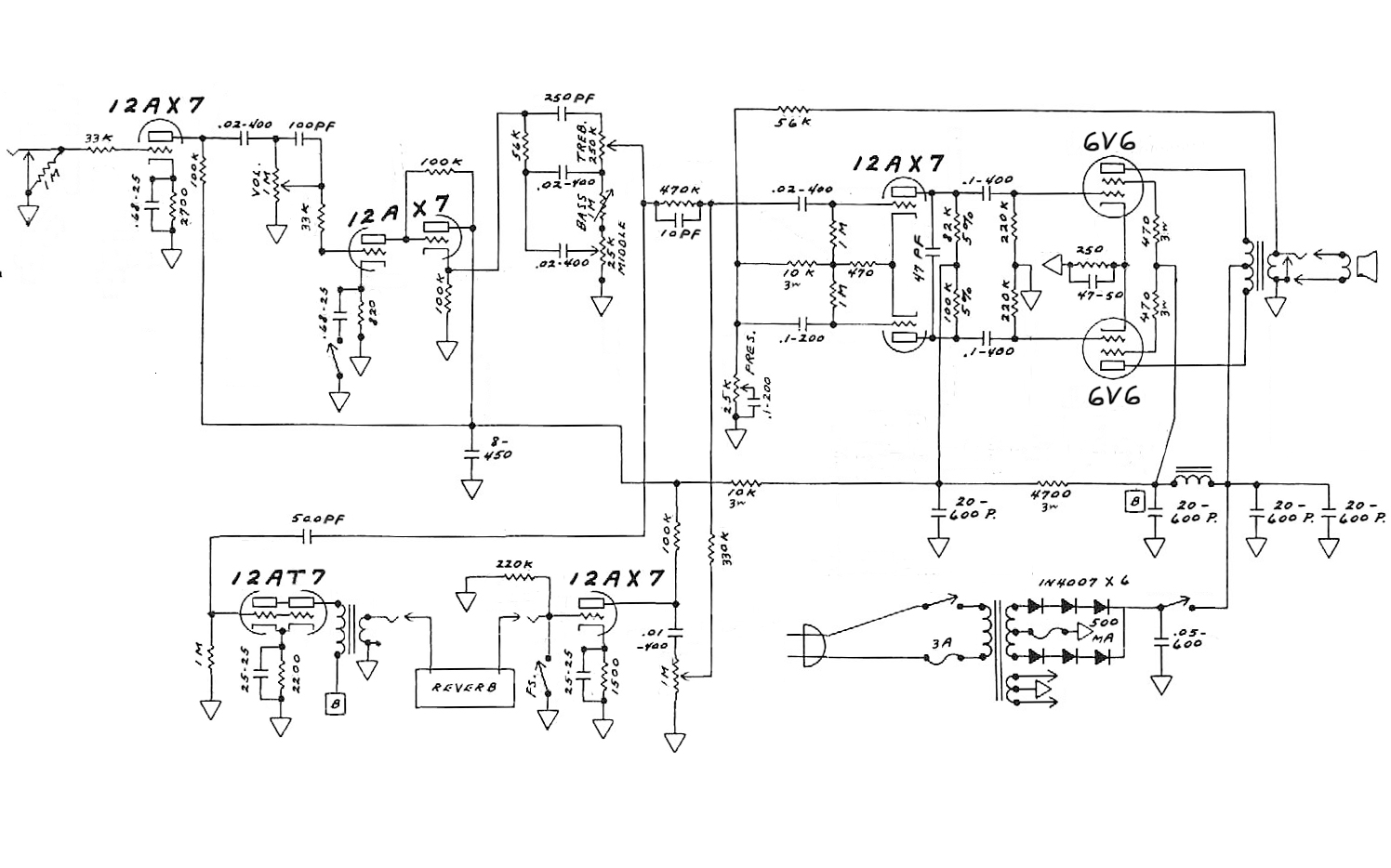 The astute will notice that the reverb mixer acts a bit like a master volume set somewhere between 40-75%, but I figured the preamp had enough gain, and the lower headroom 6V6 power amp would be more easily driven than the traditional Bassman circuit anyways. A small sacrifice to marry the best reverb circuit with the best rock preamp. For the purists, I've added a pull switch on the rever pot to bypass the mixer and give me a pure Plexi preamp.

So anyways, I stripped the chassis to it's bones, and drilled a couple more holes: 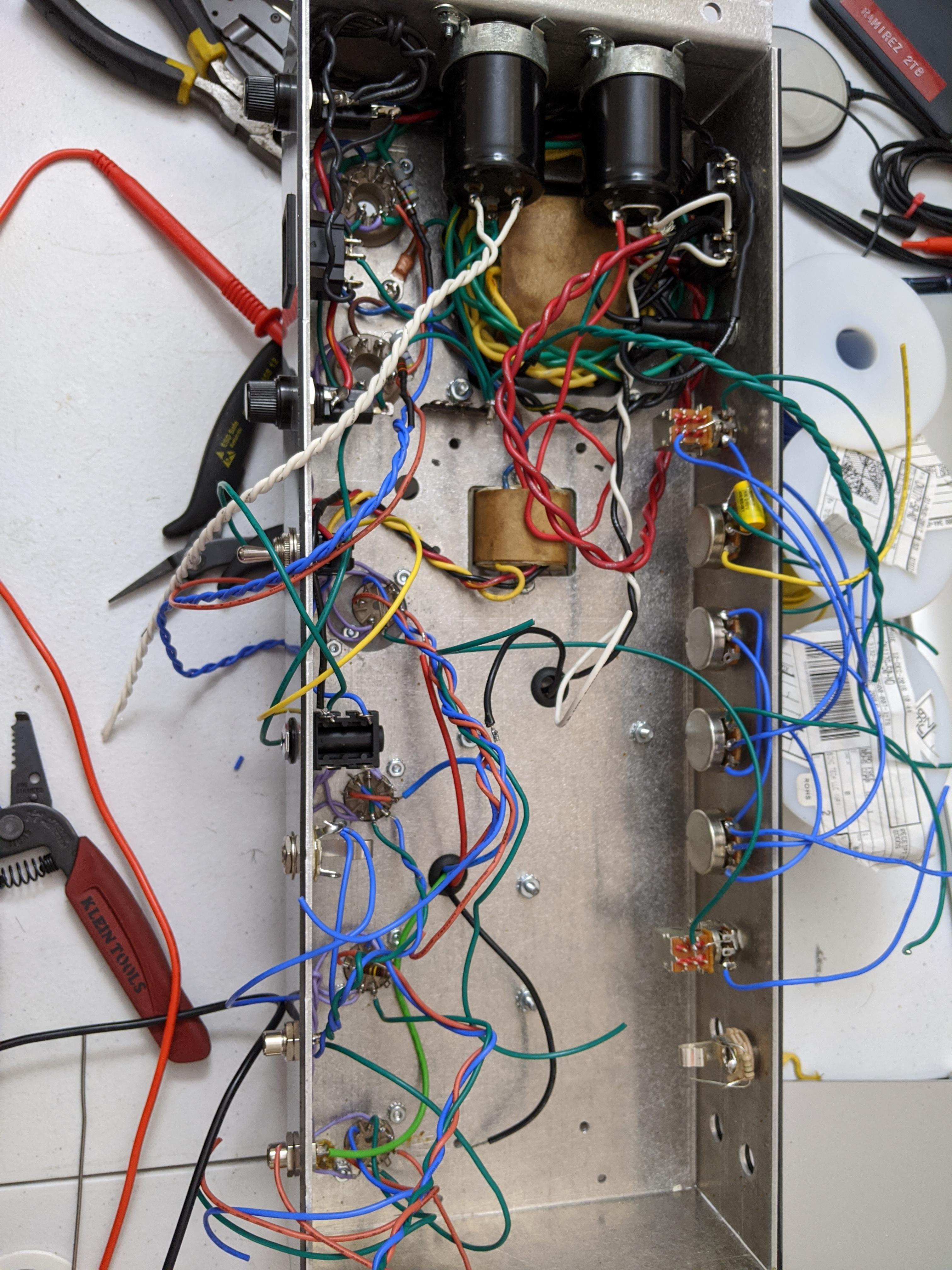 Designed a new circuit board (I had to break out the 3 lb hammer for this task): 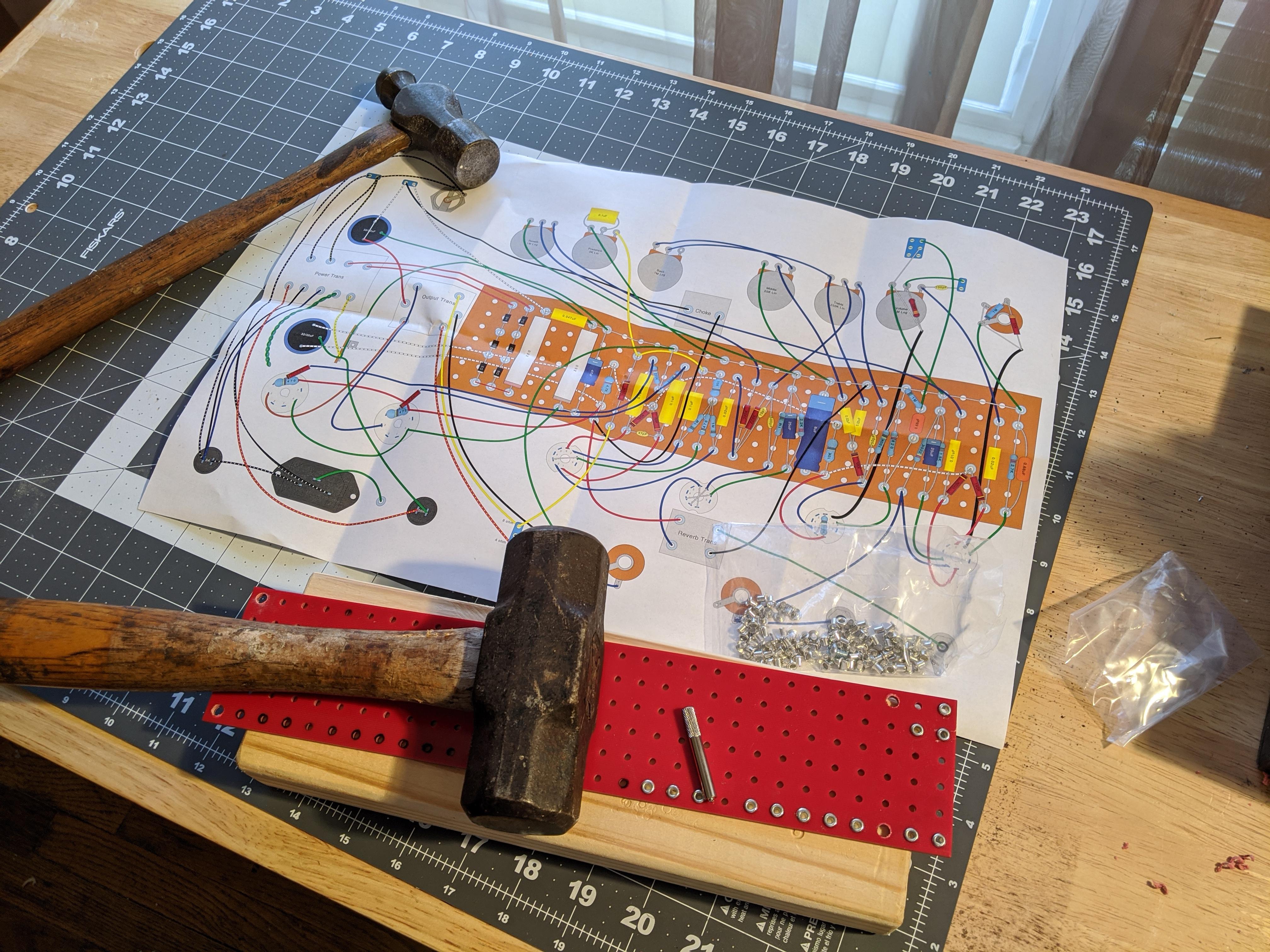 And built a new amp (not the cleanest layout you'll ever see, but quiet enough and shielded where it needs to be): 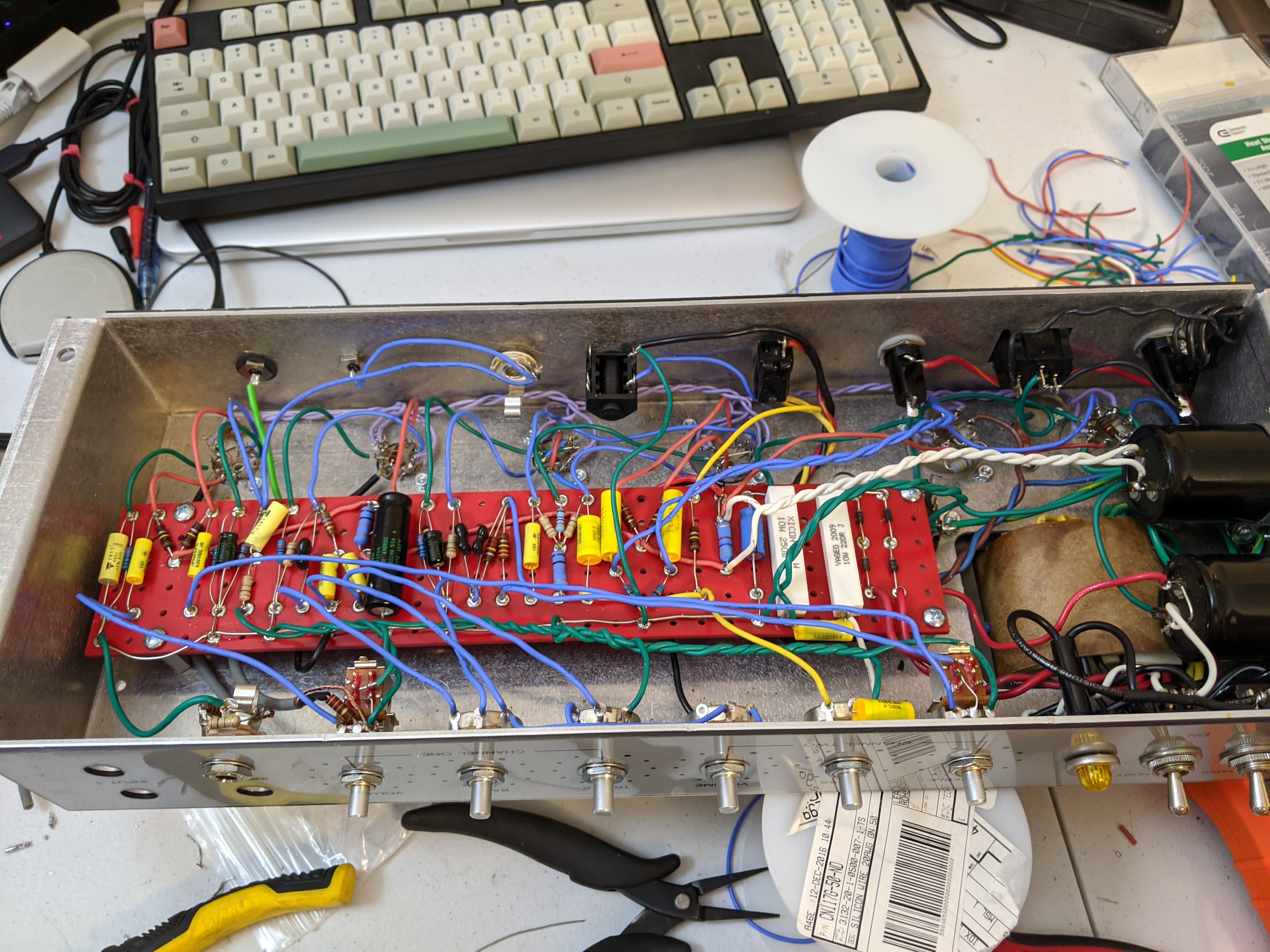 It's glorious! Classic rock distortion at around 5 on the volume dial, a little loud for the living room, but not quite as deafening as the 50W version, along with a reverb that's not quite as surfy as a Twin (due to the modified mixer circuit), but certainly enough for this level of preamp distortion. It's pretty much full-on crunch at around 5 on the volume pot, and any higher just adds additional power tube compression. Below that, it's surprisingly well-behaved, and you can crank the reverb without it ever being overbearing or ice-picky like a Twin.

It's not very pretty at the moment: 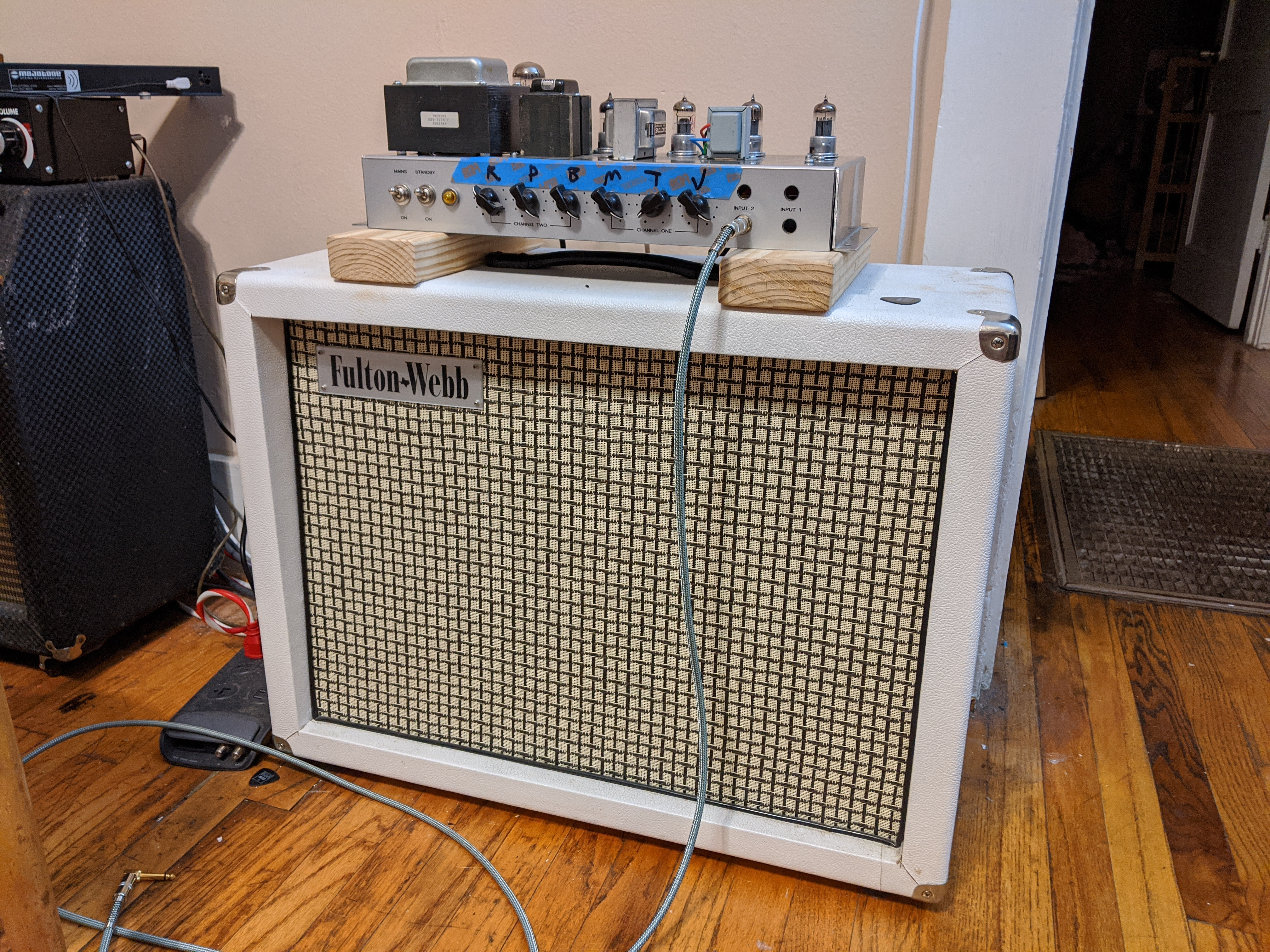 But it will be once the cabinet Powdog made arrives (thanks Ethan!): 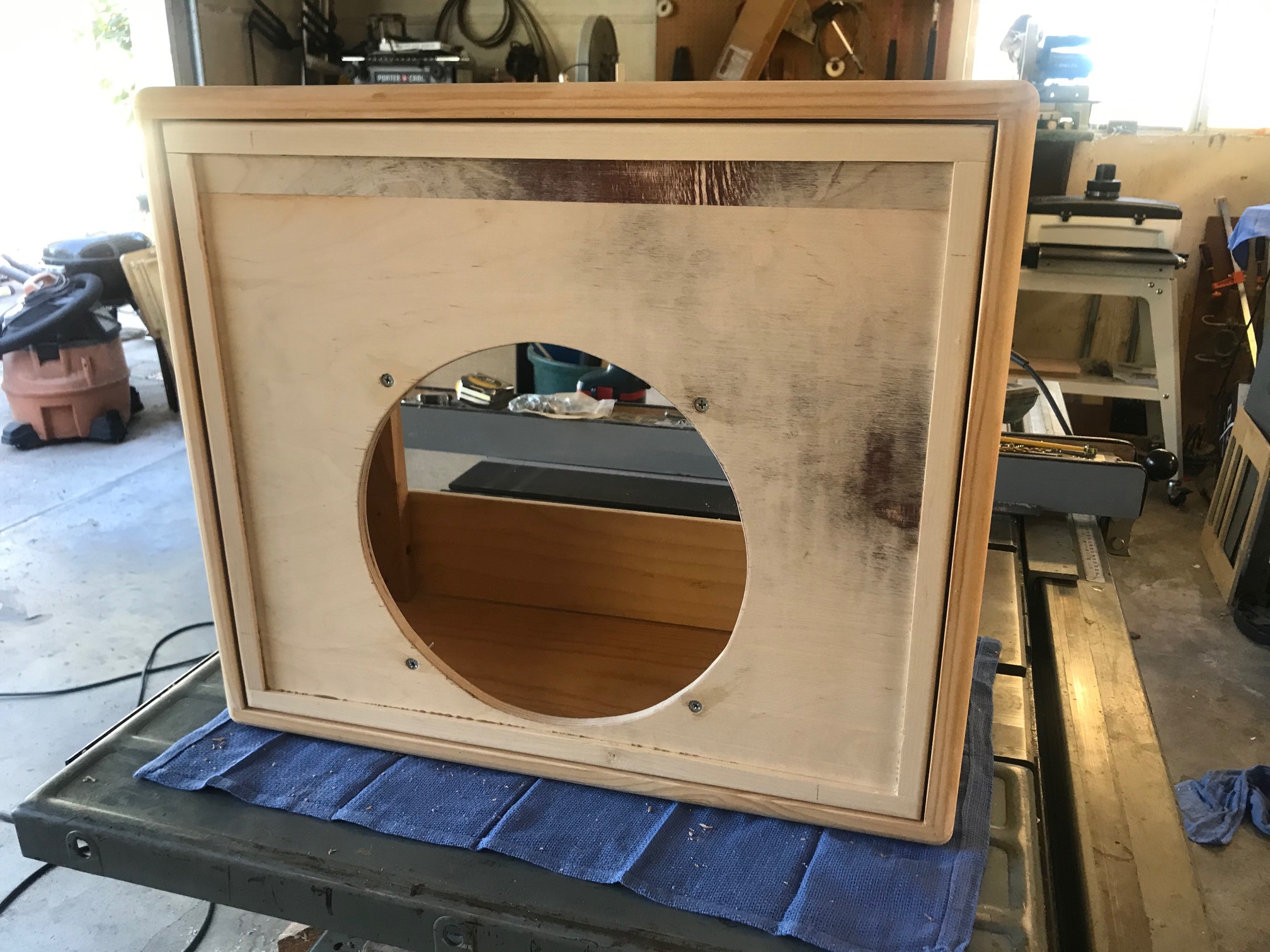 I'll be sure to post up some sound clips, etc., soon, but I've really only played it for a couple hours, and had to tear myself away to make this post.

In your schematic,I don't see any sag resistor at the output of the rectifiers. If you want more sag and less headroom, why did you use a choke? The choke is to keep it from sagging or breaking up.

You're right Billy, there is no sag resistor in that schematic, but you can see it in the picture of the circuit board. It's one of the two big white resistors, the other being the cathode bias resistor. Here is a more up-to-date "as-built" schematic 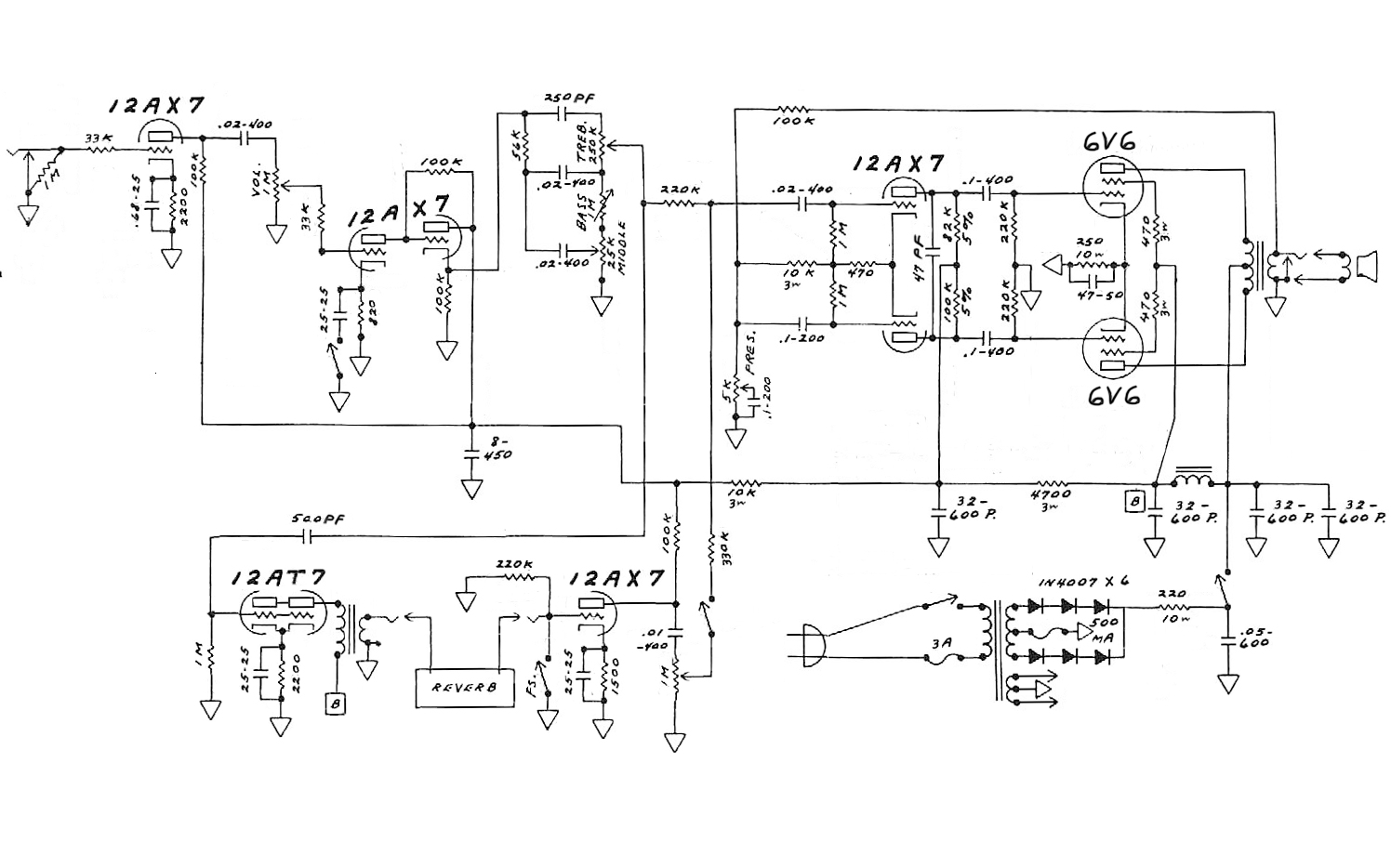 Let me know if you have any trouble accessing the files.

I build three versions of the same amp. It has a Tweed Bassman/Plexi preamp and has either one 6V6, 6L6, EL34 power tube. I also offer it with a pair of EL84s for 18 watts and a four EL84 for 30/18 watts It was my first offering and I still make them. It's called "the Winfield"

That sounds super cool. How do you like the single-ended version? Does yours have the reverb too?

That sounds super cool. How do you like the single-ended version? Does yours have the reverb too?

The Single ended version when using a 6L6 or EL34 can get louder than you think. I have one I built in my shop that I took back in on trade. I've been having some fun with it. It does clean to incredible distortion and everything in between.

I bet it screams! I'm already thinking about my next project, and considering a single-ended take on the Supro Thunderbolt.