Supro Tremoverb. It didn't rattle when I got it, but after I swapped some tubes, the rattle began. [but it's not a tube... read on...] It's for sure rattle from the upper back panel- because when I remove that back panel, zero rattles. I tried tightening the screws, loosening the screws, and also putting very thin foam between the panel and the chassis (note: not between the panel and cabinet... more on that in a second), all to no avail. "Rattle" may not be the best word... it's a "resonance" I guess... but the term "cab rattle" is the commonly used phrase.

I tried putting very thin foam between the panel and the chassis, and that didn't work either.

So, I've googled, I've already tried everything I can think of. Any help? The rattle is driving me insane, and it really p's me off because it wasn't there when I brought the amp home... it's like something has changed in the relationship of the back panel and it's mounting to the chassis. Also, just to be more clear: it's not that tube cage, or the tubes. When I play the amp as pictured- no back panel- ZERO rattles. 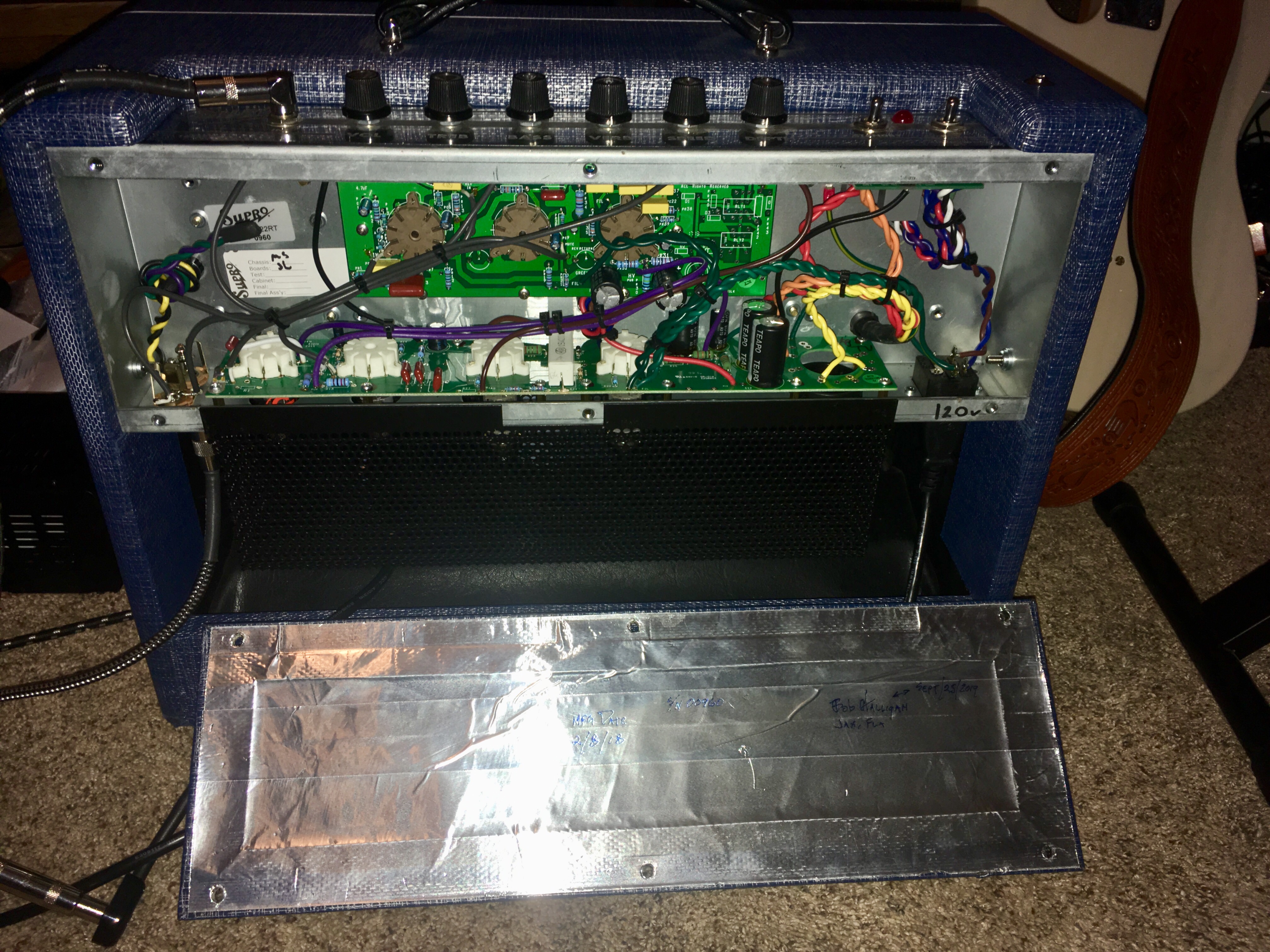 Could t be that it is not the panel resonating, but that having the panel in place allows vibration to transfer in a way that it doesn’t when the panel is off?

I know that is a whole new rabbit hole, but I had a similar thing happen with a ‘63 Ampeg ET-2. With the back panel off there were no rattles, but with it on I had a resonant rattle I couldn’t stop. Eventually I tracked it down to a replaced coupling cap that was vibrating. The original had been glued down.

Could it possibly be the shielding stuff on the inner back panel that is loose and causing the noise while vibrating?

I love hunting down cab rattles.

Like sascha mentioned, I’d start with the shielding. It’s sticky backed aluminum tape, so you can try pressing it down firmly, with a rubber roller if you have one. If that fixes it, put some staples across it to keep it from re-lifting

I'll investigate the foil shielding, but it seems to be well-stuck to the panel. This whole amp is built very well. Better than modern day fenders I have owned.

I usually build by back panels under size to eliminate contact issues. If you think it’s a Tolex contact thing going on try a thin smear of vegetable oil on the sides of the panel where it contacts the cabinet, something to reduce friction.

Try loosening the chassis/cab bolts enough to allow it to move a little. Now replace the back panel to the chassis. Retighten the cabinet bolts. This should reduce any flexing of the chassis.

"Try loosening the chassis/cab bolts enough to allow it to move a little. Now replace the back panel to the chassis. Retighten the cabinet bolts. This should reduce any flexing of the chassis."

I tried this, the noise remains. I do thinks it's the too-tight fit; I could try vaseline I guess?

Try the panel press fitted in with out any screws. Then add a couple of screws in different positions and try it. ie just the middle two holes, opposite diagonally, etc. It maybe that the 6 screw holes are introducing some binding. It might be that you need to enlarge the holes and use washers.

I wish you luck. I hate chasing down rattles. Recently traced a rattle in my little Plexi combo to the plates of the power tubes. Those big o-ring dampers helped, but only up to a certain volume.

My old Ampeg had some cabinet rattles when I bought it, but I put weather stripping everywhere I could get at, and it's rattle-free now.

"Try the panel press fitted in with out any screws. "

Still makes the noise. If I pull just the top edge of the panel away from the chassis, it stops. 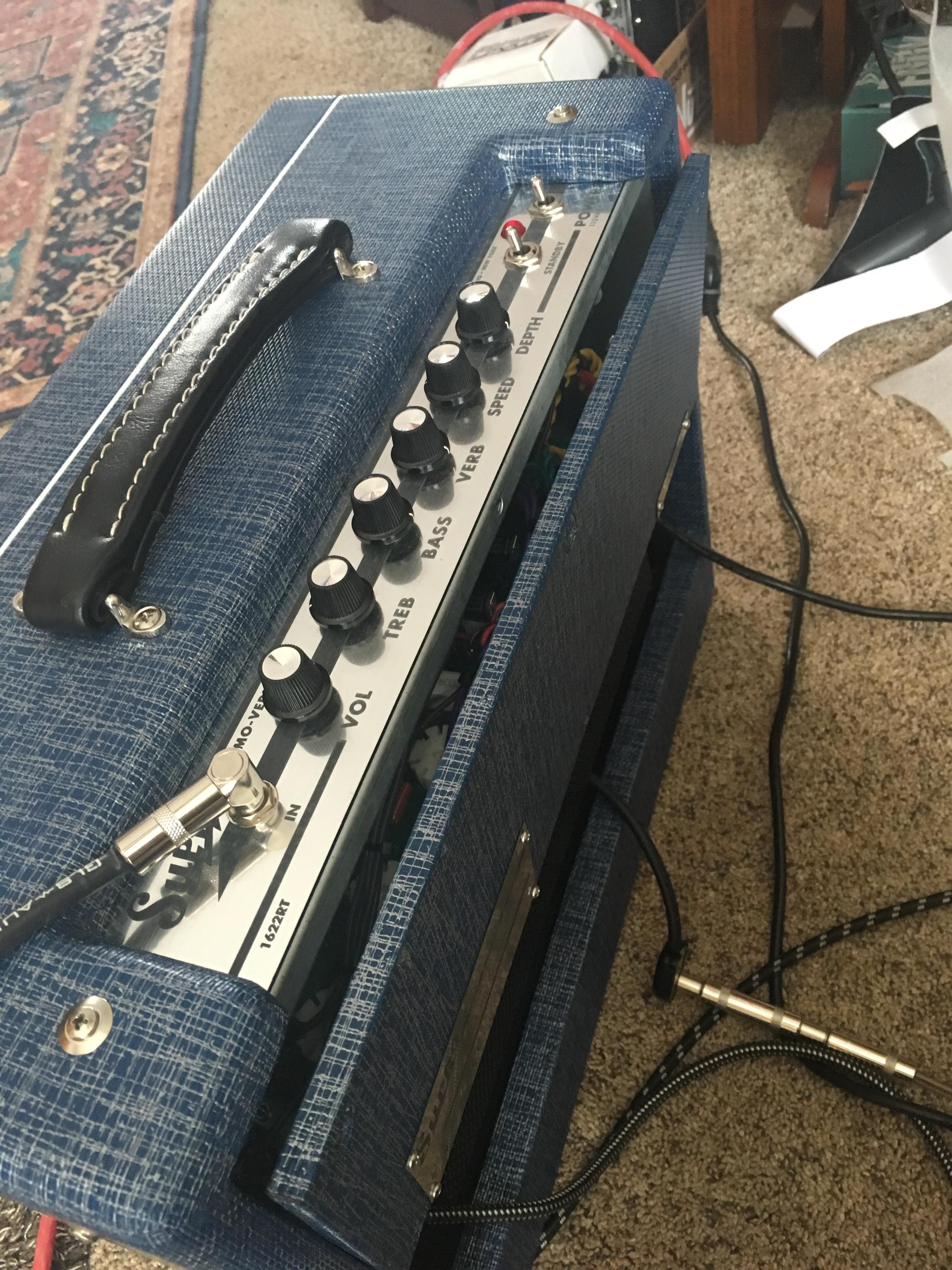 Interesting. Seeing as ot's such a tight fit, maybe the top and upper edges of the back panel are pushing the edges of the cabinet outward, creating a gap between the chassis edges and the cab. Does it fit upside down ?

With the panel on, have someone play thru the amp til you hear the noise. Start pushing on the panel til it stops. If it’s the contact between the top of the chassis and panel put some felt along that edge.

With the panel on, have someone play thru the amp til you hear the noise. Start pushing on the panel til it stops. If it’s the contact between the top of the chassis and panel put some felt along that edge.

I've done this. Pushing on the panel does not stop the noise. What does?

disconnecting the panel from the chassis fixes it. If I pull out the top (as in the pic), OR the bottom, OR if I just put the panel in place halfway in: meaning it's touching the cab all the way around, but is not touching the chassis... no noise.

Any of the wire bundles in the amp close enough to be vibrating against the back panel?

Any of the wire bundles in the amp close enough to be vibrating against the back panel?

No I checked that.

By George I think I got it! 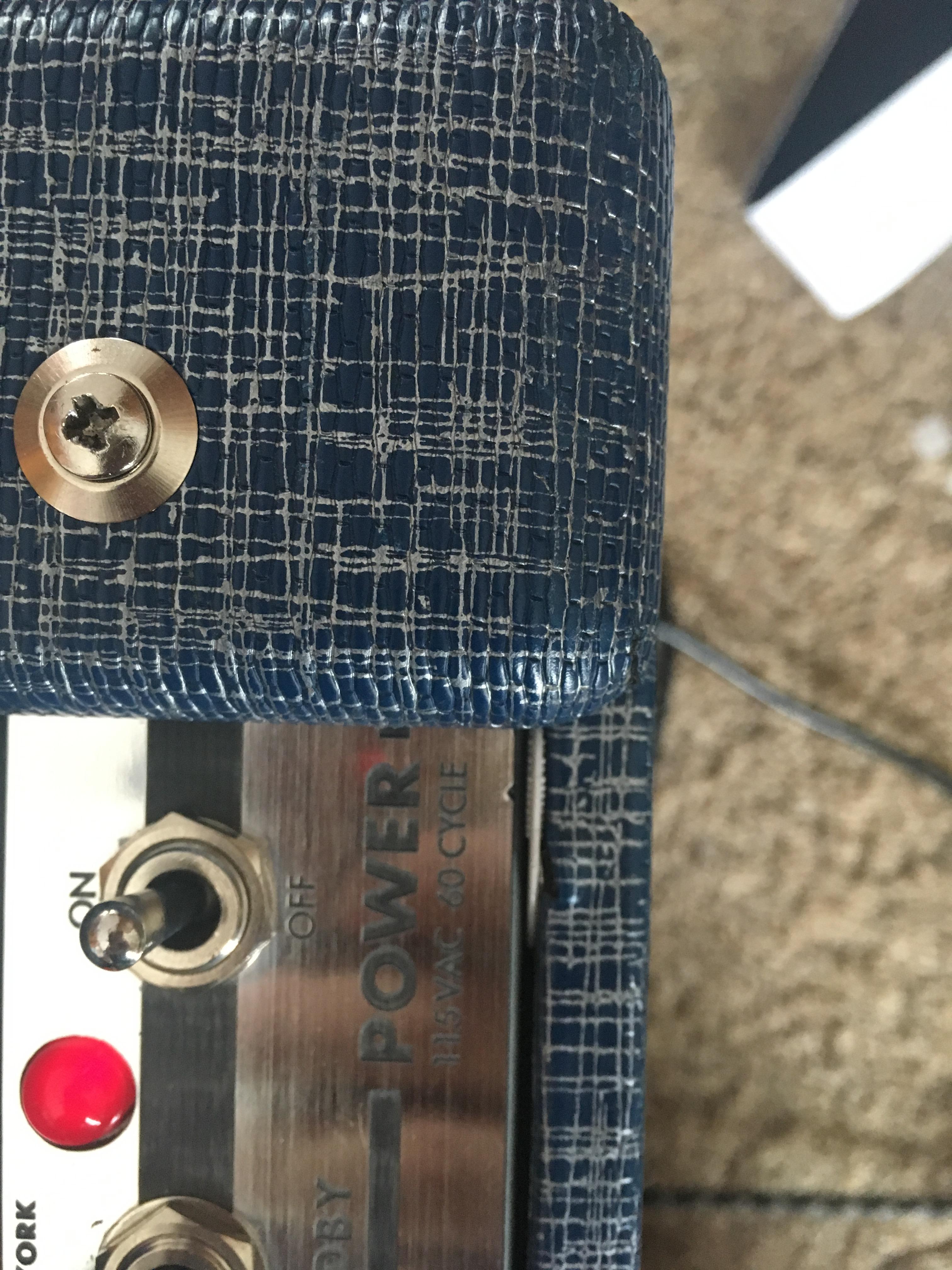 Whatever works! I've used guitar picks as neck shims before. They come in handy

I've found cabinet rattles that were due to a void or separation in plywood layers. Those will drive you insane trying to find them.

The Blues Jr has a rubber strip along the upper chassis lip. Looks like yours is only along the bottom.

The Blues Jr has a rubber strip along the upper chassis lip. Looks like yours is only along the bottom.

Actually, on the Supro that's a metal flange from the tube cage... I think it's designed to contact the shielding tape on the back panel, and create a sort of "faraday cage" for the tubes and chassis.

But if I can find thin enough pieces of rubber, I would definitely give that a try.

Actually, come to think of it... I have flashing tape.... (rubber tape for window and door installs)

I’ve always used felt, something that won’t melt.....just in case.

Also, if there’s any play in the holes drilled thru the cab you might try loosening those bolts and pull the chassis as far back in the cab as it will go and hold it there while you tighten them back down. Might just apply enough pressure against the back panel that you won’t need to shim.

So that;s how modern Supros are built? I'm shocked! How awful.

That faceplate (control panel) looks like a separate piece on top of the chassis, maybe that’s vibrating?

So that;s how modern Supros are built? I'm shocked! How awful.

Agreed, what a joke. A fool and his money...