Markbass Little Ninja bass amp. Not new but the best amp I’ve had for a while. The second Ashdown 2x10 is a recent acquisition though, to pair with the other one. 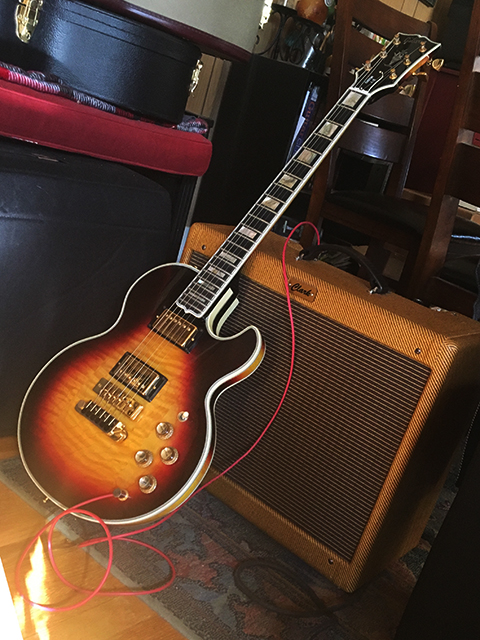 Well quite a selection -- leaning to boutique and modern design stuff. Glad also that My Demented Projects led to progress on the Powdog Premier restoration.

Also gratifying to see when someone is Happy as Hell when a long-desired acquisition comes in, like Mr. Howard"S '64 Deluxe.

I seem to be pretty well covered at 4 amps - 5 counting the clean in box Micro Cube coming in from KC Ed. But it's really not an amp, it's 1/2 of my acoustic guitar.

One name that seems to have dropped off the face of the earth (to me) is Peavey. They used to be everywhere backing up everyone. Maybe they have put all their cards in the EVH hard rock scene....I have no idea. But I am just seeing them less.

EVH amps IRRC are under the Fender umbrella (Eddie took the 5150 amp name with him, when he said "see ya later" to Peavey, forcing them to change the name of the amp associated with him, to 6550), in the same way Gretsch is. Peavey moved production to China in the mid 2000s, and IMO, hasn't been the same since then. They offer nowhere near the the same amount of products they used to.

As for amps, my current amp is a Blackstar Silverline Special 50, which is a 50 watt 1 X 12" amp. It's similar to the Boss Katana amps, in that it emulates amp types, rather than your typical amp modeler. I need to get the expression pedal board, so it's easier to to switch effects, and amp types on the fly.

I am a simple man: Mystery Brain into a Fender Tonemaster 2x12 V30s.

"It's just that they would be furniture more than instruments, and I'm a bit overcrowded as it is."

I'm a bit fascinated at Mrs. Protey "caning" one of your amps. Bet, that story is a volume in itself. That's a seldom found talent that used to be met in by folks from the Kentucky School for the Blind.

There's also a Peavey Delta Blues which is currently sat in a van somewhere in Essex waiting patiently for a return to live performances, and a little Sound City practice amp.

So yeah, all very recent...

Still doin' that Peavey EL thing with the Delta Blues 15. Had one, liked it, sold it. (Dunno why.) Got another one. Keeping it.

Wanna see that there Porta-Flex! Does it have the satellite speaker, too?

But what really get used most, averaging a couple hours a day, are these - with the mighty speaker rig shown resting atop the Mooer.

Such are the conditions of life in the here and now. Much as I love'm, amps are for me increasingly anachronistic luggage of Glory Days Past.

Not that I don't have a hankerin' for something like the Supro Ruger shows, or the Balthazar that caught my eye here (http://gretschpages.com/for...) ... or something by Ethan or Muggsy (whose DeLisles are lush-sounding marvels).

It's just that they would be furniture more than instruments, and I'm a bit overcrowded as it is.

Maybe eventually my curiosity, interest, and attachment to things past will find some balance with what I can realistically make use of.

How can you keep learning all this new Recording stuff?

In one sense that gear "looks" like a Ham Radio kit, or controls for a Radio Station Engineer, both things of the past...but then you add all the software, and plug-ins, whatever...impossible.

Just hadda throw up The Wall!

The last amp I bought was a solid state amp by Orange. I heard some guy playing one at GC and loved the sound of it. I bought it in August of 2019 used from a guy in the Best Buy parking lot in Fullerton (CA). Funny place to buy an amp.

I need a 12 step program

They come but never leave

They’re taking over the place

I’m beginning to understand why I live alone

Not that I’m complaining

It’s funny, DCBirdo asked us all what our latest amp acquisition was but the place being what it is it’s turned into Ampoholics Anonymous.

Tsar, I tried the reverse Uno card with all my non-interesting, non-recent amps.

Tsar, I tried the reverse Uno card with all my non-interesting, non-recent amps.

HH amps are definitely interesting! The sound of Irish punk!

Latest cab built for Bob Smicz, inventor of the only battery powered all tube amp the Smicz PortaBlues.

Latest cab built for Bob Smicz, inventor of the only battery powered all tube amp the Smicz PortaBlues.

It’s cool the way things work out, isn’t it Ethan?