If you have a vinyl copy of The River you can see a Gent (or two?) in his rack.

There is a picture of Bruce playing a 6122 in the studio in the booklet that comes with the River album. I was at a Springsteen solo acoustic show some years ago and he played a White Falcon and a Black Falcon on a couple of the more rockin' songs.

If they play guitar in the E Street Band, they have more than one Gretsch. In fact, I think Garry Tallent collects them.

During the solo performances mentioned above...he used a White Falcon and a 6120 on performances of "State Trooper" and "Part Man Part Monkey" (Youtube Part Man Part Monkey Seattle...State Trooper Dussledorf)...probably because it's minor key stuff and he wanted to give it a particular vibe with the Bigsby. He used the Country Gentleman on "From Small Things" which he recorded for The River but never used it and he gave the tune to Dave Edmunds. Little Steven started using a green Anni for "Point Blank" during the last few tours...and he's used a Tennessee Rose on some tunes. When I was talking to Nils Lofgren during the last tour, I asked him if he was going to break out the Black Penguin and he said they weren't doing any of the songs that he normally uses the Penguin on. So for the E-Street band Gretsches are something they break out of the guitar armory for a particular conquest.

Mr. Trouble? How in the world are you?! 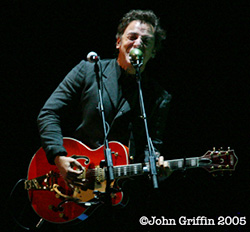 At the end of the day, he's still a Telecaster slave.

At the end of the day, he's still a Telecaster slave.

The way Springsteen sweats during a show, Teles are almost a must. From what I have read, the electronics on his Teles are basically sealed/waterproofed with silicon. Gotta give Bruce credit, he has stuck to his guns and never done a signature model Tele and he sure has had offers. A few guys over at the Tele Forum have made some pretty amazing replicas of Bruce's famous Tele/Esquire mutt.

Mr. Trouble? How in the world are you?!

I'm good Deed...getting old...LOL...everyday above ground is a good day. I hope you and Duane are doing spectacular.

We are, thank you xx You need to spend more time here, really. It took a Springsteen post to pull ya back in! And your son?

We are, thank you xx You need to spend more time here, really. It took a Springsteen post to pull ya back in! And your son?

I know! I come back from time to time and poke around...I was always more about playing guitars than talking about them I guess..but the GDP has been a great place to hang out and learn a few things.

My son is good. Eddie is really smart and a good soul. He has a sister now...Ani (she's 19 months old), who is a crazy curious little girl with an already expansive vocabulary. Wish I had started being a parent earlier in life when I had more patience lol.