I think this is around 1970. Show ended in 1971. Good version of Merle song and btw who's the guy on B bender? Doesn't look like Clarence -- first b-bender was 1967 I read, so couldn't not have been too many out there.

that's bob warford on guitar...he got that tele from clarence white

he played with linda ronstadt too..

I thought Clarence White's wife gave his Tele to Marty Stuart, unless there was more than one.

warford got his when clarence was still around..its an earler parsons/white effort

byrds drummer gene parsons the mechanical mastermind behind them

I liked them better with the Crickets.

I liked them better with the Crickets.

that's bob warford on guitar...he got that tele from clarence white

he played with linda ronstadt too..

Yes I had heard of Warford before ... you are right. Didn't know he was that early on the bender scene but that must be one of the earlier Parsons benders.

Here is a picture of the back of Warford's guitar. 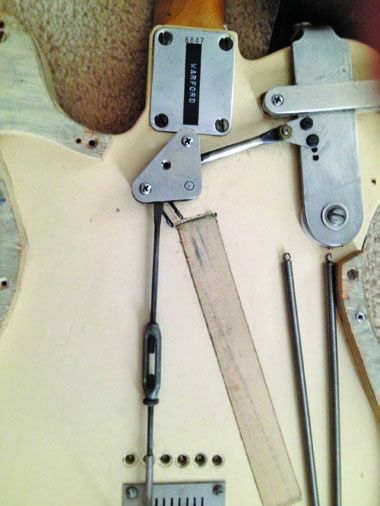 Bob played on the studio track of "Willin' ",and was in Linda's touring band for awhile.Managed to give him a thumbs-up at a show in Denver circa 1974-5.