Okay--here is the deal... I do need an acoustic.

You guys know me as a hard-core Martin guy, but considering the cost, the environment where I live (tough winters, heating systems that will dry out a strat and rough gigging conditions--and just...me), that's sadly a no go.

Also, sadly, here Yamahas, Taylors, etc. are way overpriced. What does show up are a wide assortment of corts, breedloves, eastons, etc.

Now some of these actually feel and sound pretty good. I'm mega hesitant to go down that road. I will say though that I've tried a couple of Ibanez acoustics that were surprising. Or not--years ago I had an Ibanez acoustic that was simply phenomenal, and I routinely took it to bluegrass jams and it held it's own (as did one Yamaha, but nothing else).

So... any recs? Looking for a dreadnaught with a bluegrass sound....

Taks are also out. Not really a fan.

Old Guilds are still to be found surprisingly cheap on occasion,why they're not as collectable as Martin or Gibson is one of the great mysteries of life.

Recording Kings are cool, and strangely go for cheap.

I bought a LAG guitar when I was in Czech a couple years ago. French design, made in China. It was good bang-for-buck.

Over here in Europe Japanese made acoustics from the 70s to 90s often are available dirt-cheap. I like them and have a great Suzuki D-35 copy. Try German eBay or ebay-Kleinanzeigen.

Cool--ah, I meant to put this in 'other guitars.' Maybe a mod can move the topic for me.

What about a yamaha ar3?

One's come up for sale out here.

Recording Kings are cool, and strangely go for cheap.

I was about to suggest Recording Kings. How about an Epiphone?

I'd go for a used Guild first. Can't beat them---even with a Martin. I'd never talk anyone out of a cheap acoustic. Having a guitar that you can keep out, at hand, is a great thing for when the Muse strikes you. You can take them anywhere, they don't need AC, and can be used as a paddle when you're up the creek without one. If they get destroyed or wounded, you won't be out too many zlotys.

Imports can be great. Yamaha, Ibanez, Washburn and Epiphone all make good serviceable instruments. I keep two acoustics "at hand"---out of their cases. One is a Martin Backpacker (the only Martin I'll ever own) and a $50 Epi with a bolt on neck that plays as nice as any of my electrics. My Guild D-35 isn't as easy to play, but the sound is amazing.

You should be able to find an Eko pretty easily. I've liked a lot of the ones I've come across.

I had a nice $45 Framus for years - don't even remember why I sold it. Now I have a Hofner that I paid $20. Something about those German gits that I like. Oh yeah, also an Amigo Czech travel guitar that I have had for 14 years.

I'd say if a Yamaha has become available, I'd look into it. I have never seen a bad piece of Yamaha equipment or instrument.

O.K. I kept waitin' and waitin' and nobody has hollered "Alvarez" yet!! I think Alvarez guitars are VERY good, especially for the money. I have an RD8 (low end) that I would put up against ANY other flattop / acoustic, any brand including Martin or Taylor! I believe in a double (ear) blind A/B comparison my $60.00 Alvarez would win out or at least hold it's own. So before you plunk down some cash check into some Alvarez guitars. "That is my opinion and it ought to be yours"! (Chet Atkins) Thanks, Steve

I second the Seagull, I have one and it's a fantastic guitar! It's made by Godin Instruments in Canada. I have one of the Artisans series, but the S6 is a major success. I actually wish I had bought the S6, and saved the money. They come with the Godin QT1 pick up system, and a cutaway. Great guitar for the money.

I was about to suggest Recording Kings. How about an Epiphone?

Just got an Epi, EJ200CE, Pretty nice, Not too much $$ The magic is in the electronics, I have had many electro Acoustics, This one beats them all! Try one you will like it!

You have to realize that Konrad is in Poland. His access to guitars will be different than in the US. German guitars would be likely choices.

Heck yeah, Alvarez and seagull. Alvarez were best during the 80's, right? So I've heard. I've heard great things about the Seagulls also. I still say if he can get a chance to play the Yamaha, he won't be disappointed.

Alvarez are nice. I particularly like Blueridge and Eastman acoustics...i have an Eastman 000 that i love, and had a Blueridge BG-160 J-45 clone that was just outstanding. also, don't overlook Yamaha.

Guys-- a lot of what I see out here are corts, low-end epis (I did try the masterfully ones, but was noty wowed), ibanezes and strange brands that come and go out of China. There are furchs (great, but ex-pens-ive) and generally overpriced take, yamahas, tailors and martins. The yamaha ar3 is at the price you see in the US, which is odd (and why I asked). Ibanezes have been better than expected, although years ago I had a great one...

Cort anyone? I used to see hohner but have not in quite a while.

Agree with a used Seagull S6. I snagged this "nicely worn-in" S6 at Sam Ash for $200 a few years ago. It has become one of my faves.

(No clue why somebody traded it in after playing it so much - because it's definitely a keeper..) 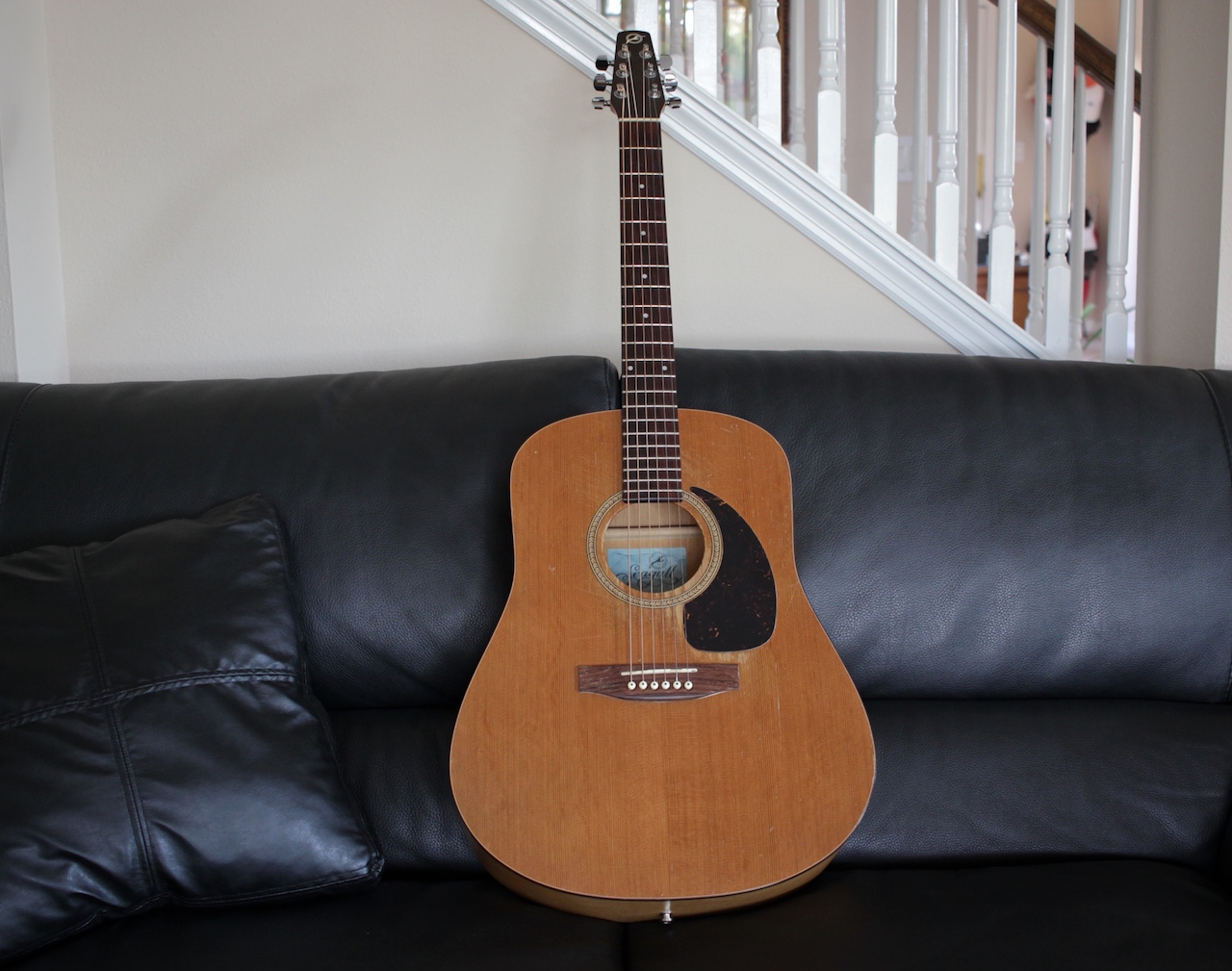 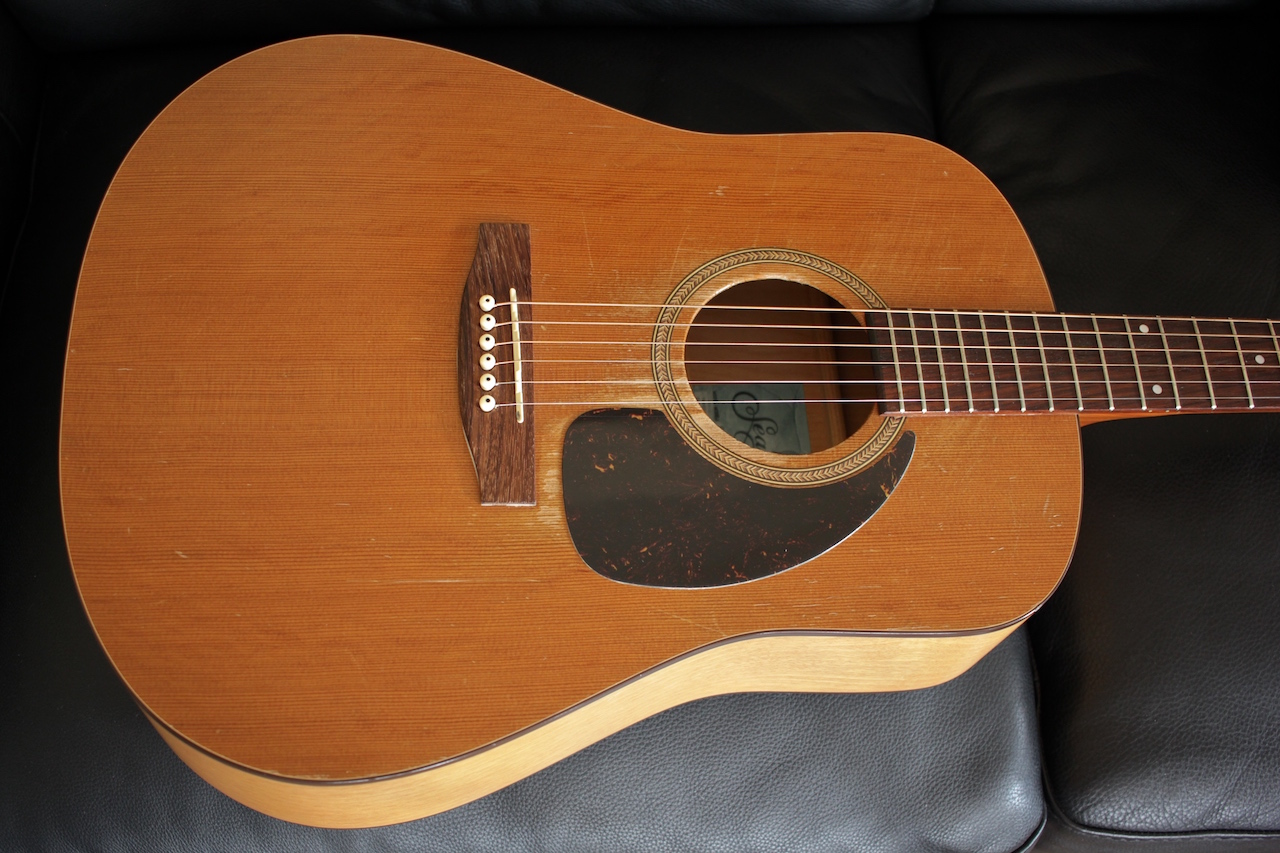 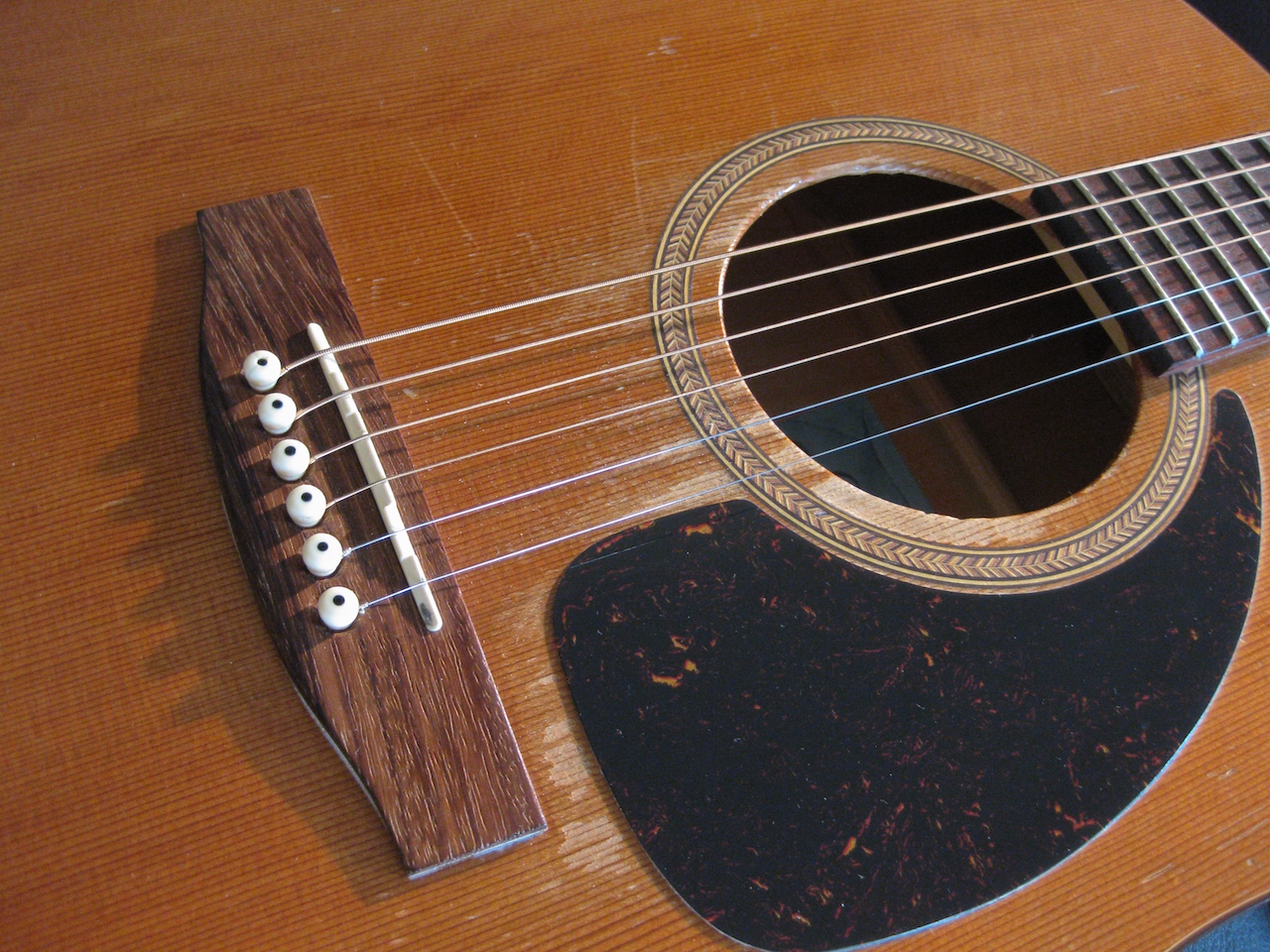 Cedar top on the Seagull, very soft. They look like that after 15 minutes of play.

Cedar top on the Seagull, very soft. They look like that after 15 minutes of play.

I've read about cedar top guitars, in general, being softer than spruce. My Seagull Artist has a spruce top and is absolutely pristine, after 3 years of use, without having a pick guard. The Seagull forums talk about being careful when playing a cedar top, they scratch easily. I think I've been extremely careful with mine, because of the absence of a pick guard.