Congratulations Tim, on the jab and the nab!

I don't drool over a lot of the modern Gretsch offering... with the exception of this rosewood Tenny. Wow, wow, wow... what a deliciously sexy guitar! Kudo's to you Tim for ditching the pickguard!!

My old rocker ass would have her all scarred up in no time. I can just see/hear you playing her.

Oh yessir. I predict this one will be a modern classic.

It’s a guitar with the admitted class and gravitas of ordure-loam Country Gents, with the hardware showing like a seam of gold running through the soil of a king’s private preserve. (An effect that’s most dramatic when found on the rare-ish lighter, more figured examples of the late 50s and 60s.)

Except this is more so, because it’s both dark (for max contrast) and highly figured, with a bespoke, book-matched presentation quality.

Like you WHAT? Not only poached in the king’s forest, but made off with some gold too? May the king show his benevolent mercy...but don’t count on it.

I think it stands with the majestic 6122-59 for sheer presence: too nice a guitar for us commoners to own.

Sometime in the 50s, Ed Ragsdale was promoted to General Manager of Buick. It was a step up, so he bought himself a Cadillac. On his first day, GM VP Harley Earl visited his office at the Flint plant and suggested they look out the window at the parking lot, which was a sea of Buicks, Chevies, and Pontiacs.

Said Earl: “Which is your car?”

“Mistearl, it’s the Cadillac in my reserved spot.”

“I see,” said Harley. Pregnant pause, furrowed brow, pursed lips.“Don’t you think that’s too much car for you, Ed?”

Ed thinks for a moment. Harley looks at him. “I see what you mean, Mr Earl.”

But I’m still not going to give up the Rosewood Tenny.

Kudos to you Tim for ditching the pickguard!

I thought the black was uncharacteristically down-market for the rest of the guitar. If I can roust Paul the Setzer, I’ll have him make up a clear one with a modest graphic in gold.

I really don’t want to scratch up the top.

Yeah, and while I'm at it...the headstock should have been bound. Because right? I mean, they kinda violated the down-market un-fancy Tenny gestalt when they made it out of figured rosewood with blingold hardware, didn't they? Wonder what Captain Curt would charge.

the jab and the nab!

I like this guitar an awful lot. I has me thinking about making some changes in the stable.

I myself,am now feeling the guilt and buyers remorse from a recent purchase (2015 6119HT GE) as the bill arrived yesterday,but it'll pass,it always does.

Congratulations on the new guitar guitar, Tim! It's the one that I have an eye on too, and the only one of the new line up that excited me. Yours is a beautiful example, it's gorgeous! I hope you have a long and exciting relationship with it! (it seems like you're already on your way of doing it)

I got my first Covid-19 vaccination today, just a couple of hours ago. I'm still alive and feeling good, so I'm half way there!

Noooo... not a clear guard!! If you must have guard maybe consider sourcing some authentic (looking) brown tortoise material?? Setzer could etch a tasteful rose on it similar to the steershead we find on early tortoise guards from the Roundup models from’53/54.

Noooo... not a clear guard!

No? What's awrong with clear? Tortoise is a good idea, though.

I'd say congrats, but I'm made speechless by the drool...

Apply binding to the headstock and eighty-six those ridonkulous fake sound holes, Gretsch/FMIC, and then we'll talk!

But the faux F-holes are one of the coolest quirky features of the Tennessean and it makes it an excellent high volume guitar. I would swap out the filtertrons but that's just me

Apply binding to the headstock and eighty-six those ridonkulous fake sound holes, Gretsch/FMIC, and then we'll talk!

The 'fake' nature of the sound holes isn't the issue. With the binding painted on it gives them character as they stand out, unlike the unpainted ones on the Gent. Nobody in the the audience can tell they aren't real anyway.

That guitar really is a handsome devil. The wood is glorious and the shading and fading of the tint so beautifully executed.

Never has a scratchplate removal been more welcome, the Paul Setzer clearguard option is the only sensible choice.

Discreet rose inlay in the headstock and a clear pick guard with a matching rose would be the icing on the cake imo.

Congrats on the Rosewood Tenny, Herr Prot! It's a fine looking machine!

I, for one, dont mind the look of the black guard. That said, sans guard might be the best option . . .would you really be in danger of pick scratches on that? I mean, I'm as ham-fisted as they come, and I doubt I could do much damage on an archtop like that. But I do understand not wanting to blemish the new precious.

Oh, man. That is a damn fine guitar! Glad to see that they are now shipping. Congrats! Me want.

When Proteus started this thread I drooled, started to post, drooled some more, deleted my post and snapped the thread shut.

This GAS was especially painful - I flipped a Shanghai Rose a few years ago, a move I’ve regretted ever since. I have very few regrets about the gear I let go over the years, but the Rose was different. Even worse, I did it to get a Billy Bo, a guitar that was a piece of art, but one I didn’t like to play. Sitting down it was awkward, it sounded no better than my Power Jet (duh) and basically just hung on the wall.

But that Rosewood Rose.. I tried not to look but that didn’t work.

You guys know where I’m going with this.

When I told Mrs. Fieldhdj, I got the raised eyebrow. I tried to blame it on Proteus- the pictures and his mellifluous prose. Didn’t work.

When the Rose arrives I’ll post pictures with her sister.

You think I'm mellifluous...wait till you hear the blooming of the Rose.

This being really recent - are they finally getting the radius on the bar bridges right?

Noooo... not a clear guard!

No? What's awrong with clear? Tortoise is a good idea, though.

Tortoise sounds great to me, I'm also not a clear fan. And , oh yeah, congrats on a really cool guitar Tim!

I had a clear guard on my 5120 and I love them because you can see the f holes. You can tally one vote from me for clear on the Rosewood Rose. I sold this one to a friend. I hope he still has it.

I thought the black was uncharacteristically down-market for the rest of the guitar. If I can roust Paul the Setzer, I’ll have him make up a clear one with a modest graphic in gold. - Proteus

Hofner has done that well. 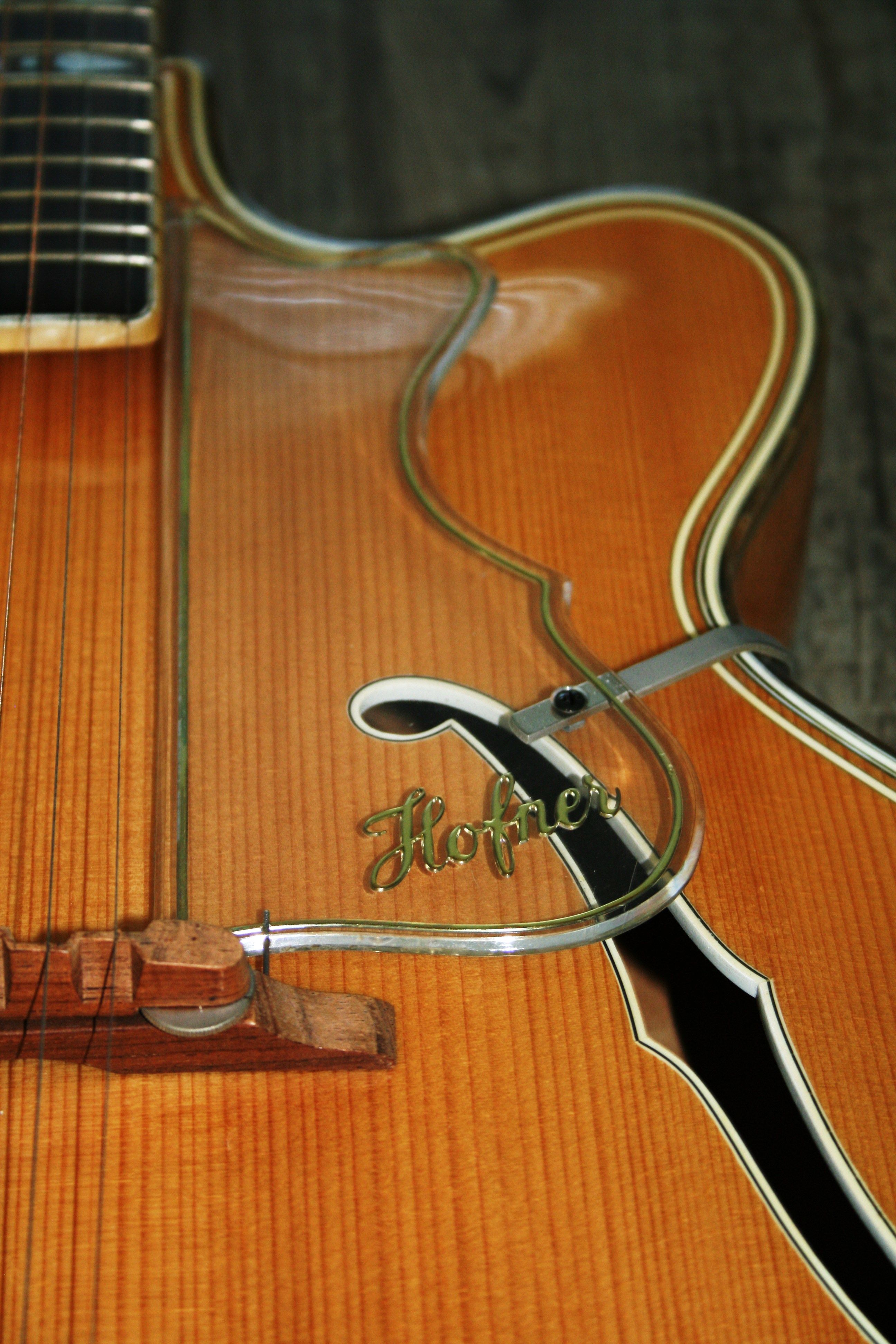