Since my original thread about this topic is getting kind of page heavy, I decided to update things in a new thread.

It's 4:50 am - yeah, it's crazy early, but I had to get up to get ready for work (complete with a 25 mile commute ). At least being a salaried employee, it's not the end of the world if I'm a few minutes late to work.

As you know, I've expressed a desire for another 17" Gretsch hollowbody - as long as it has what is to me, a reasonably chunky neck. What I have not stated, is that while I would prefer a 17" hollowbody, there are a few 16" hollowbody Gretsches that I am open to if they meet certain stipulations:

I was having a frustrating time getting neck dimension info on a Country Club, a 1959 Country Gent, and a Black Falcon (the sellers either had no idea, or didn't get back to me). I was also not sure about a 2005 Black Phoenix that had a reasonably chunky neck (.88" thick at the 1st Fret, and .95" thick at the 12th Fret), because I wasn't sure I wanted a 2 pickup guitar that only had 1 master volume control. So, in the interest of broadening my horizons, I started looking into some 16" Proline models I think are pretty cool - the 6118 Annie (I had a nice Annie about 7 or 8 years ago, that I probably should have hung onto), and the 6119. There were some pretty pretty cool ones on Reverb , at OK prices (though I would try to haggle the sellers down), and I especially liked the Jag Tan versions of the Annie with the PowerTrons in them.

The searching got me thinking about that most rare and elusive of modern Gretsches - the 6116 Power Tenny. They were only made in a couple of manufacturing lots, in 2006, and 2008. What many of you don't know, is that I have a little bit of history, when it comes to Power Tennys. Back in 2008, when I bought by first Proline Gretsch (a limed gold 6120 Brian Setzer Hot Rod [my old limed gold 'Hot Rod is the one shown in member KCEddie's book about the 6120]), I tried out a 2008 Power Tenny. At the time I had a dilemma - l was going to buy a Proline Gretsch, but I couldn't make up my mind choosing between the limed gold Brian Setzer Hot Rod, and the Power Tenny. I asked the salesman which of the two guitars Cream City Music would have a harder time selling. I was told that the limed gold Setzer Hot Rod would be harder to sell, due to to its kind of goofy limed gold color. Using the same mentality I've used when I've adopted shelter cats (give the unwanted one a home), I went with the less wanted guitar of the two - the 'Setzer Hot Rod. The Hot Rod was a decent guitar, but as I've mentioned before, it's slightly V-profile neck ended up being a turn-off for me.

With the above history in mind, figuring that the chances were pretty low, that I'd find one listed on Reverb, I decided to do a search for 6116 Power Tennys. Surprise, surprise!! One is available for sale!

I e-mailed the seller with questions about its neck dimensions.

the seller was very prompt with responding. Here's what he told me about the neck width:

I'm thinking of making an offer on the guitar. I kind of kicked myself the last time I opted out of buying a Power Tenny. The neck looks like it's my kind of neck, and PowerTrons (as long as you set up your amp right [they can sound kind of honky of you don't]), can kick some serious sonic butt - Mainsoda (who has probably been about as inactive on this forum as I've been in recent years), was a big fan of PowerTrons, and always got a great hard driving rock sound out of his Gretsches that he put PowerTrons in.

I'll think about this during my commute to work.

Seems like you have it all figured out-- what you want, what works for you. It changes as time goes by. I have no interest what I was into 30 years ago.

It's kind of a buyer's market right now -- just tons of guitars out there for sale.

Sold!! I just got a message from the seller that he'll sell it to me for $1925, with shipping included.

Looks awesome, hope you enjoy it for many years!

Congratulations, Ellen! I'm sure this will suit your rockin' style as well as the jazzier moments. And it looks great. Keep us updated.

Congrats,Ellen. I hope this one's a keeper.

I think your going to like the Power Tenny. With Power'Trons and 59 trestle bracing it will rock. I wish I hadn't sold mine. Good choice & good luck.

That's a great lookin' geet,nice to see ya posting again!

Cool! I hope she fits ya like a glove.

Big congrats....and welcome to the Power Tenny Club. I have an '06 Power Tenny also and it's an absolutely awesome guitar. I'm the first and only owner and it's one of the very few (maybe the only) guitar I've never ever considered parting with. Power Tenny's are the complete package. With the combination of the TVJ Powertrons and Trestle Bracing they sound amazing w/ any kind of OD or distortion. Even with the big '59 Trestles mine still comes in at well less than 7 1/2 lbs. The neck profile on my Power Tenny is kind of unique. Definitely 1.72" wide at the zero fret while the back of the neck in the first position has almost a very, very slight V to it (much slighter than a Setzer) that turns into a full C as you move up the neck. No question it does not feel "skinny" or "thin" in the least. I think you're gonna like it very much.

Congrats Ellen, that guitar is a beauty!

Congratulations on your new guitar, Ellen! I hope it gives you many years of enjoyment. It's a beautiful instrument, one that would be an honor to own. I'm happy for you, and wish you great success with it.

The guitar arrives tomorrow (I had it shipped to my workplace). I'm looking forward to it!

Congrats on this complete 6-string bright red piece of awesomeness. It seems you and I have the exact same desire in neck profile but this one is perfect!!! My '14 LP Traditional has the same neck thickness but it's 1.69" wide at the nut vs. the absolutely perfect 1.72".

The reason I bought my 1st Gretsch, side from being in love with the tone, is the neck profile of my Black Phoenix.

Anyway Ellen, congratulations!!!!! You have made an exceptionally wise choice!

And here she is at work, shortly before I left for the day (the guitar was delivered to my workplace this morning). 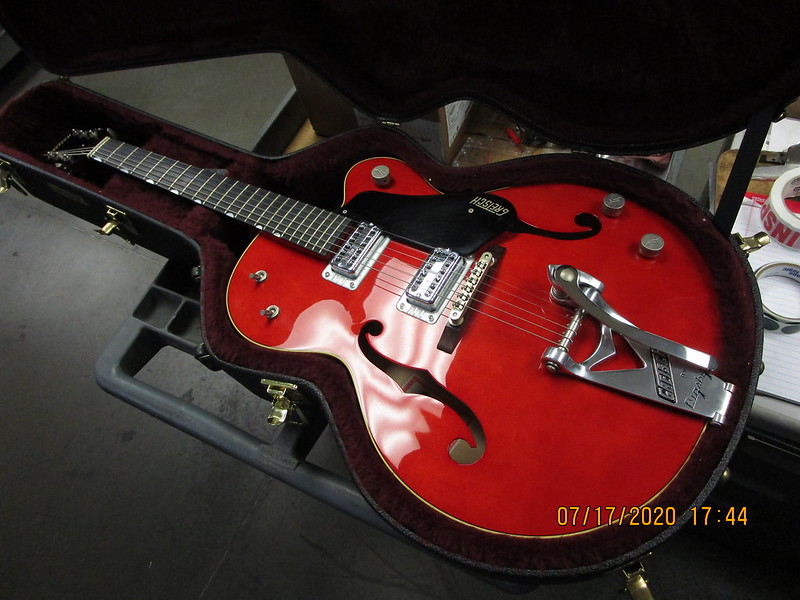 Unfortunately I cannot play my Tenny, until it has the obligatory refret job, with Jescar EVO Gold (you have to love having both a nickel, and a stainless steel allergy ). I have a question, did the Power Tenny come with a nickel plated bridge? The bridge on mine looks like dull and cruddy nickel. If so, I'm going to have to replace it with a chrome plated bridge.