OK, maybe a Historic Series Occasion would have been a better way to put it.

I was looking for a guitar that would best suit a new musical project I'm working on, and I happened to spot this creamy white G3156 from the Historic Series in the GC Used pages. This one was fairly reasonably priced and came with a case, so I figured it might actually be in the "Excellent" condition they claimed. And I was actually right about that. 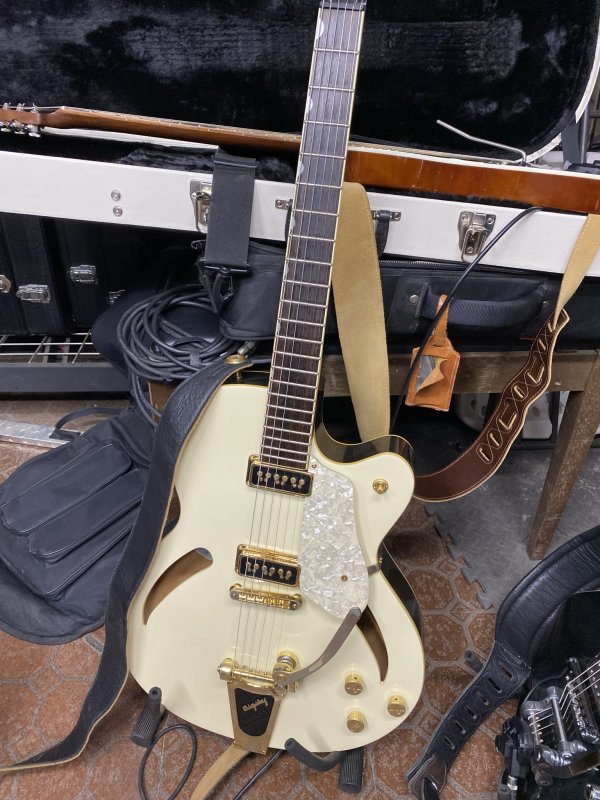 It even has something I'd never seen on one of these, a MOTS pickguard:

The pickguard's 5- (count 'em, 5!) ply construction leads me to believe it might not be original, and also because I've never seen one anywhere else.

But with some new strings, and just the slightest bit of bridge adjustment and polepiece tweakage on the DeArmond 2000s, it plays and sounds great. The USA Bigsby B6 works well and it stays in tune quite nicely, too. And I didn't notice until I owned it, but the neck joins the body at the 16th fret, not the 14th like a typical Gretsch singlecut. Even though there's no money above the 5th fret, that's still a cool feature.

The other puzzling aspect of this specimen is its case has a Gretsch logo plate on it by the handle, and under the Gretsch logo, it says "Brooklyn - Chicago." Brooklyn, OK, yeah, I get that, but Chicago? I don't claim to be an expert on Gretschology, but I'm not familiar with a Chicago connection.

Looking forward to playing at a gig someday.

I have a few modding ideas I'm working on, so it may look different in due time. But it's purdurn nice the way it is.

Gretsch had sales offices in Chicago back in the day.

Nice score, Frank, and that's a purty MOTS pickguard! I bet you have some interesting music planned for this beauty. Congratulations on the new guitar, Frank, play her in excellent health!

I'm in the process of putting real shell MOP on my cherryburst Les Paul. A company called "Thalia", makes them, they were originally an exotic wood and shell capo maker, but they have branched out resently to make guitar parts out of same materials. I started with the TRC (MOP set in rosewood), to see if I liked it, and I do, so I'm going to order a MOP poker chip and pickguard, both set in rosewood. You can pick the exotic wood that the shell is set in, they have about ten different types. They also have shell topped witchhat knobs and back access covers, but IMO that's a bit too much. The real MOP looks amazing on a cherryburst Gibson, and would on your new guitar too!

Truss Rod Cover, MOP set in Santos Rosewood. It looks much better in person. The camera doesn't catch the 3D opalescent effect of the MOP. You can also order custom engraving in the MOP.

I suspect you're right about the mop pickguard, but you never know with the Historic line: interesting build, hardware, and feature anomalies pop up all the time.

Nice guitar. Something that’s been on my list for a while. Congrats.

Setzer made me this guard. The original was a tortoisey thing that didn’t cut it.